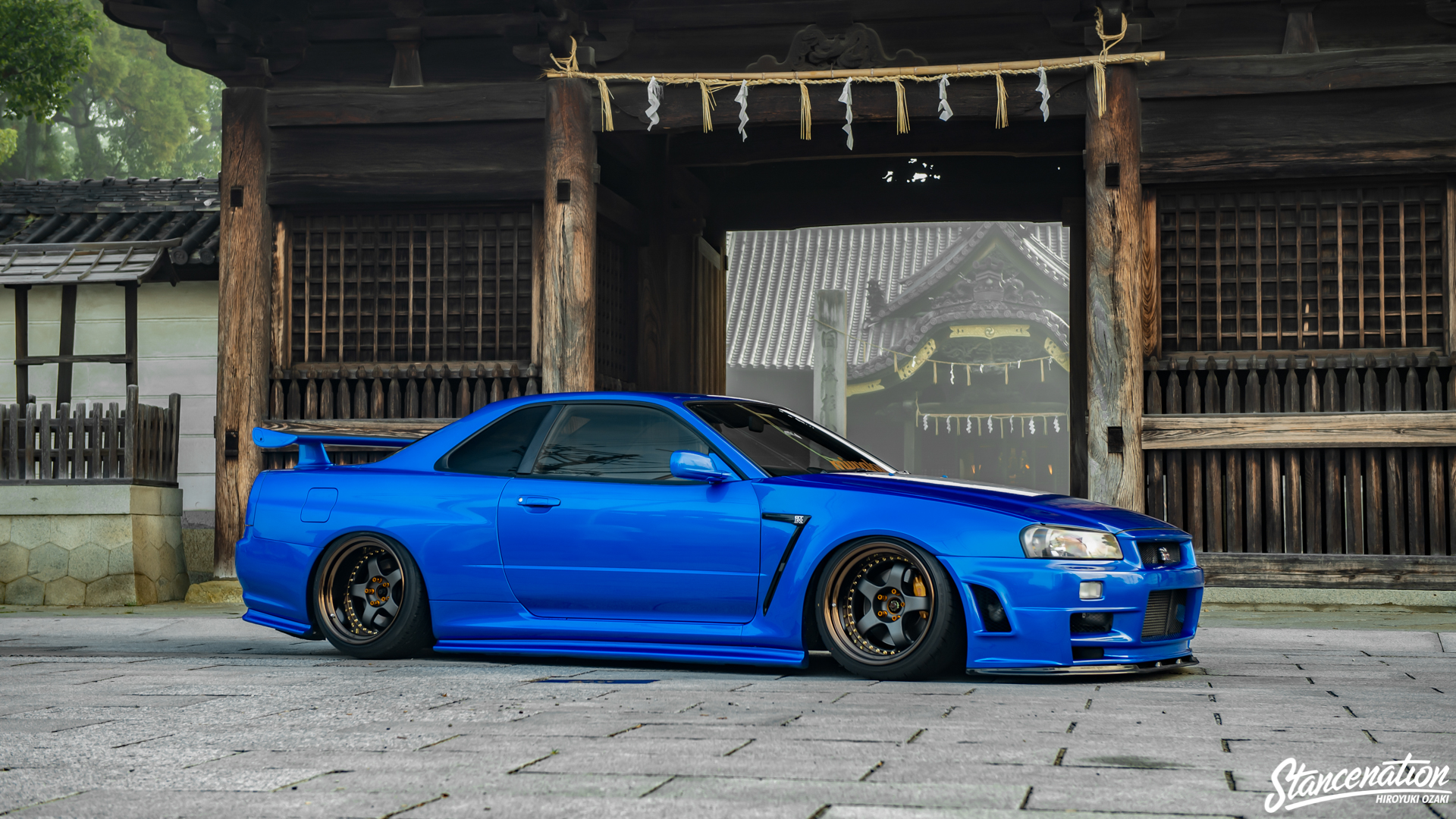 The Nissan R34 GT-R holds holy grail status in the car community.  The car aptly nicknamed Godzilla from the land of the rising sun has proven itself as a dream car for kids and adults alike.  The GT-R moniker is steeped in racing heritage, it’s twin-turbo’d inline six engine coupled with standard 6-speed gearbox and one of the best AWD systems ever developed make it a monster on the track.  So, you can imagine the purists’ reactions when they see this one blowing up over the internet… 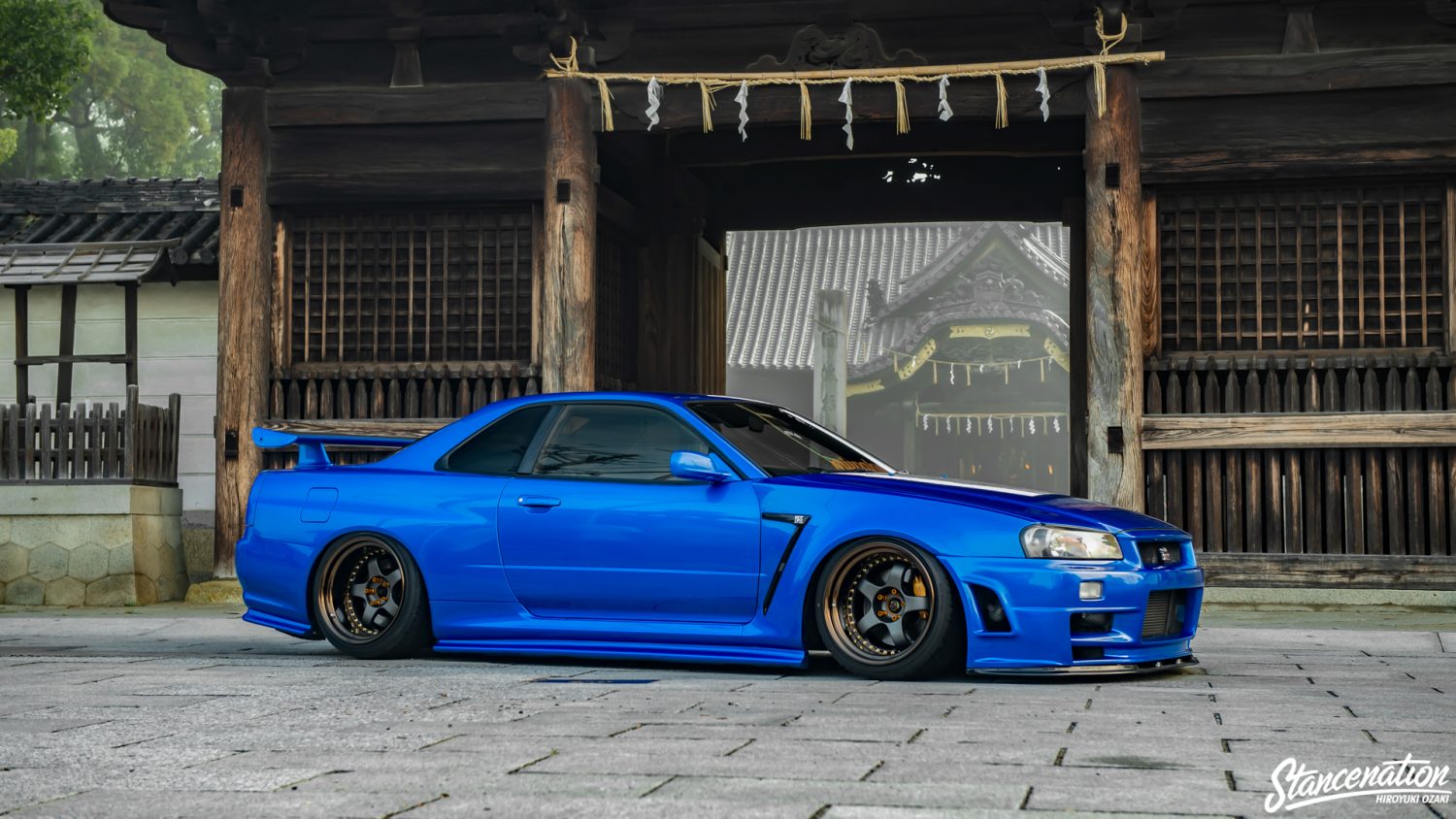 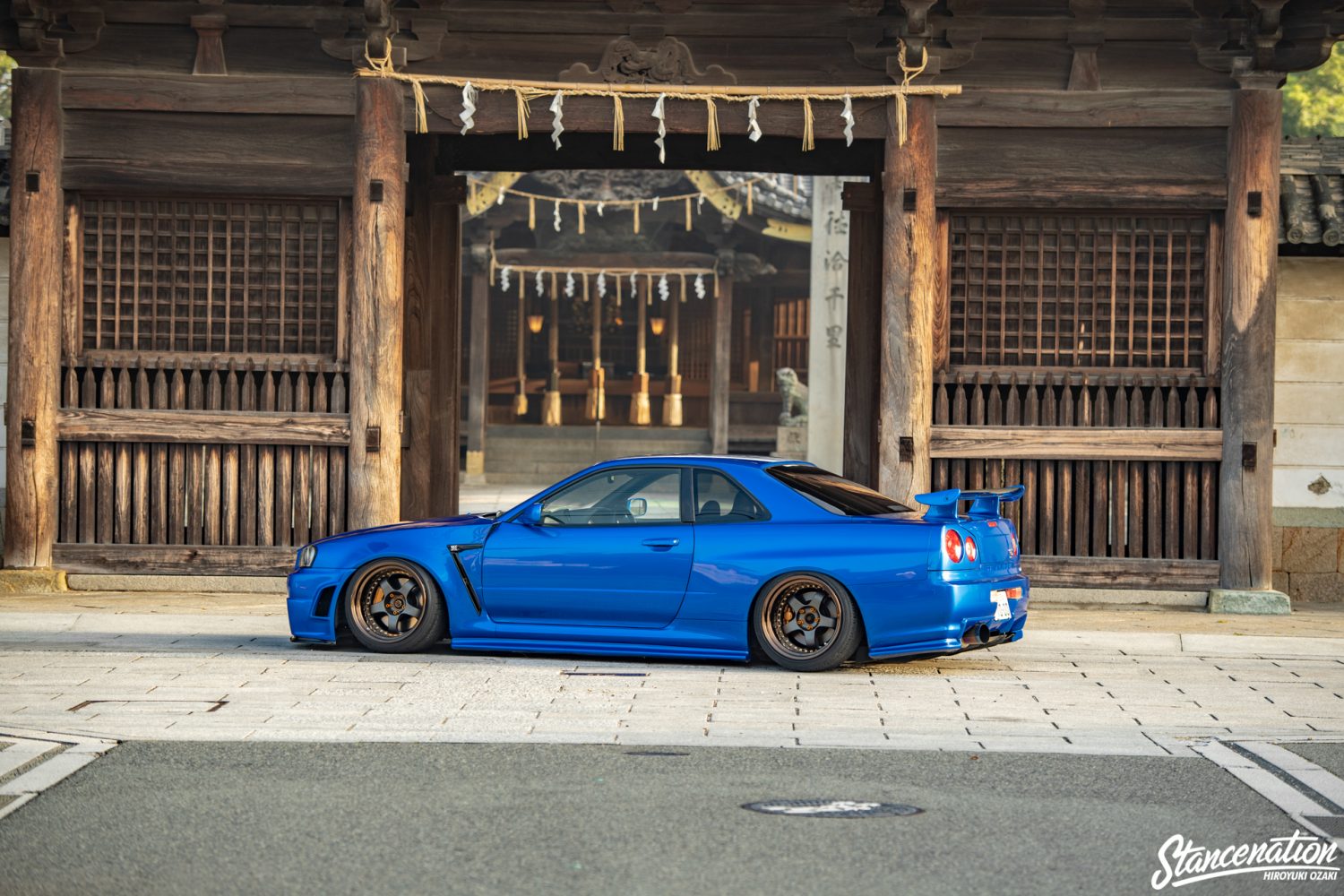 Reo Okamoto from Kasai-shi Hyogo Ken, Japan, was one of those kids that dreamed of owning a GT-R, and a little over 2-years ago, he realized his dream and purchased this Bayside blue R34.  However, his vision of what his GT-R would look like is vastly different than what most would do to this chassis.  Reo put a strong emphasis on style for his GT-R, and it really shows in the execution. 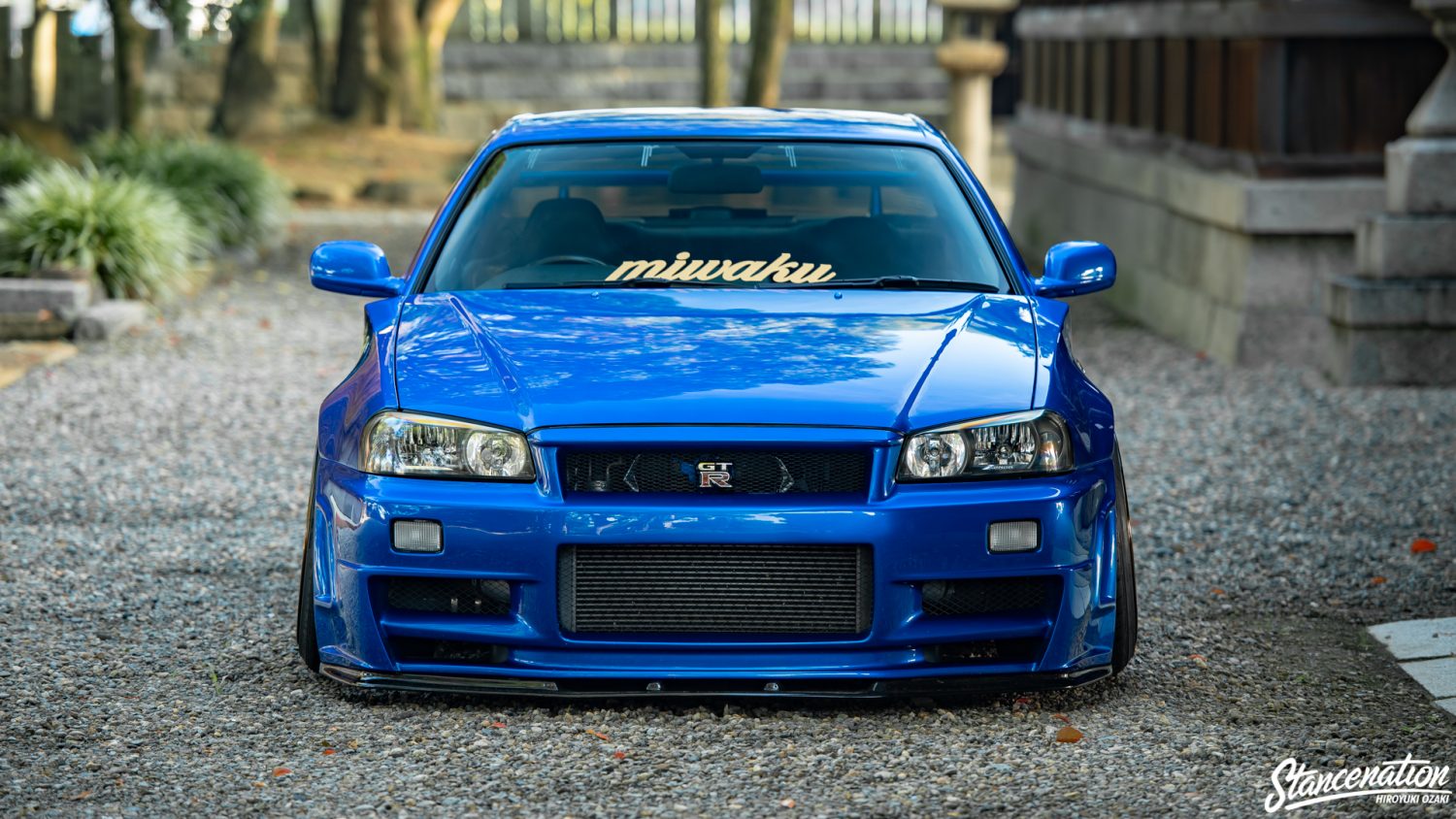 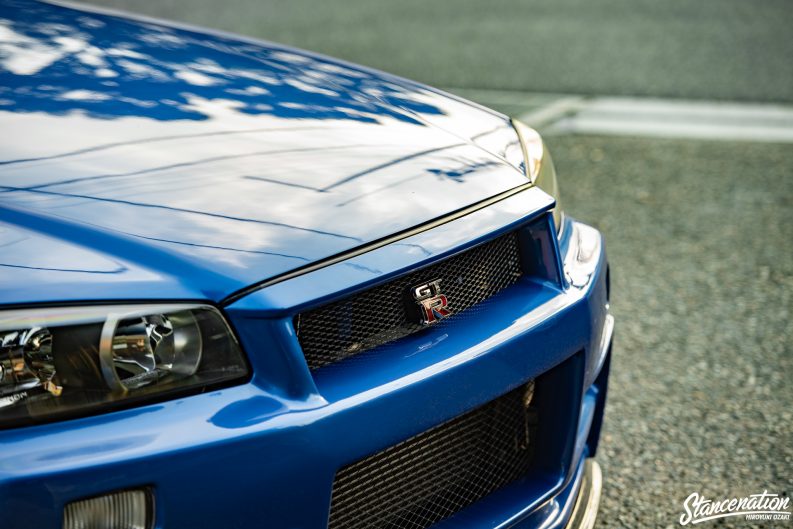 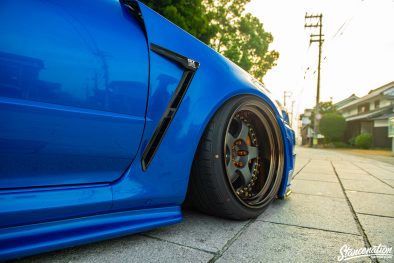 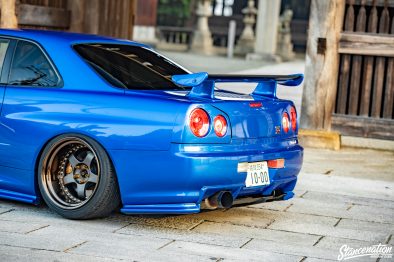 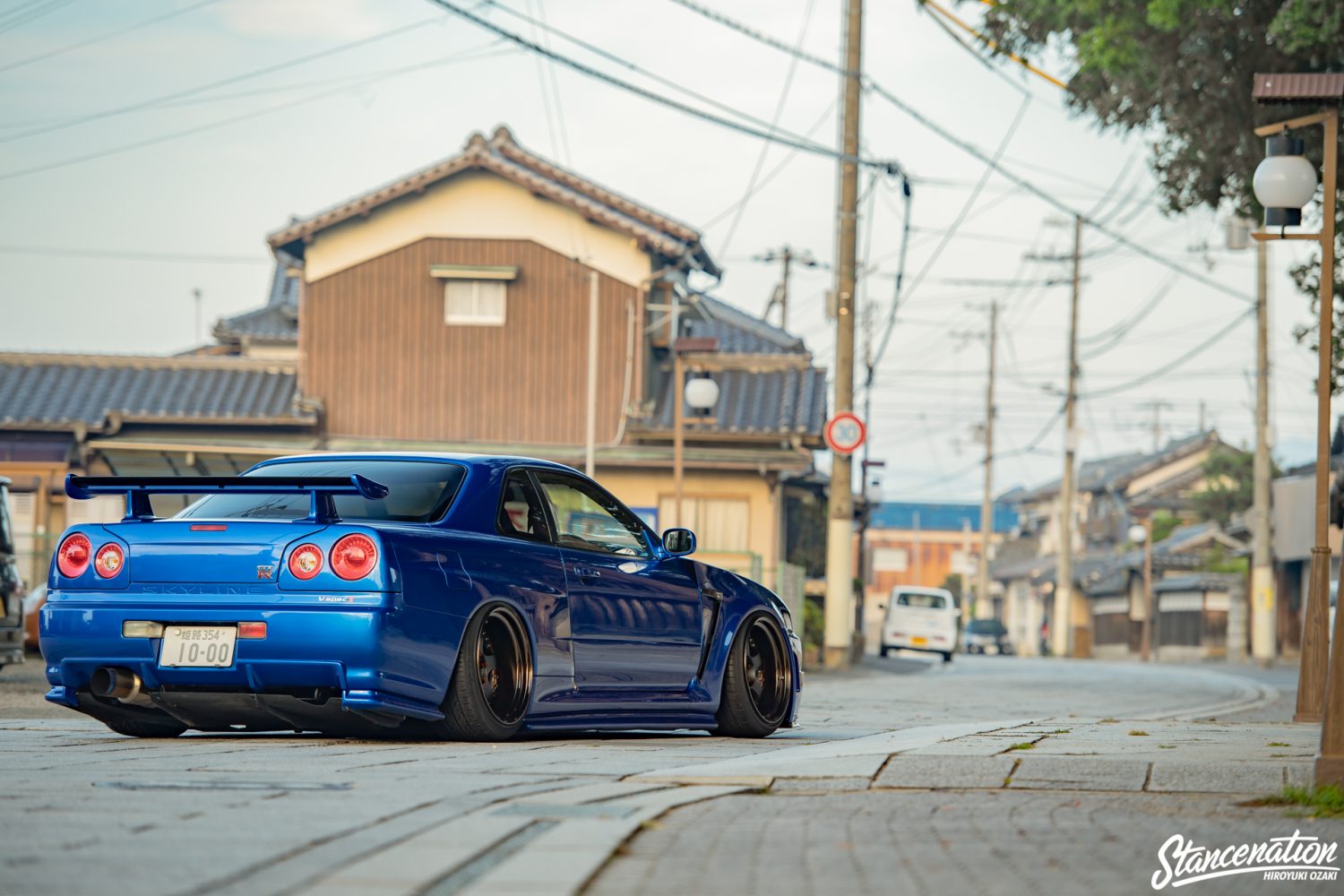 I can already hear the purists cringing at the ride height and wheel fitment, and that makes me like the car more than I already do.  To get the right stance, Reo decided to go with air ride for his GT-R, but that provided the first hurdle in his build as there were no kits out there for a GT-R model.  It was a case of trial and error before he was able to piece something together with the help of Air Force suspension.  Struts, compressors, tank, and management were installed, and to help dial in the fitment, Ikeya Formula upper and lower arms were installed all around. 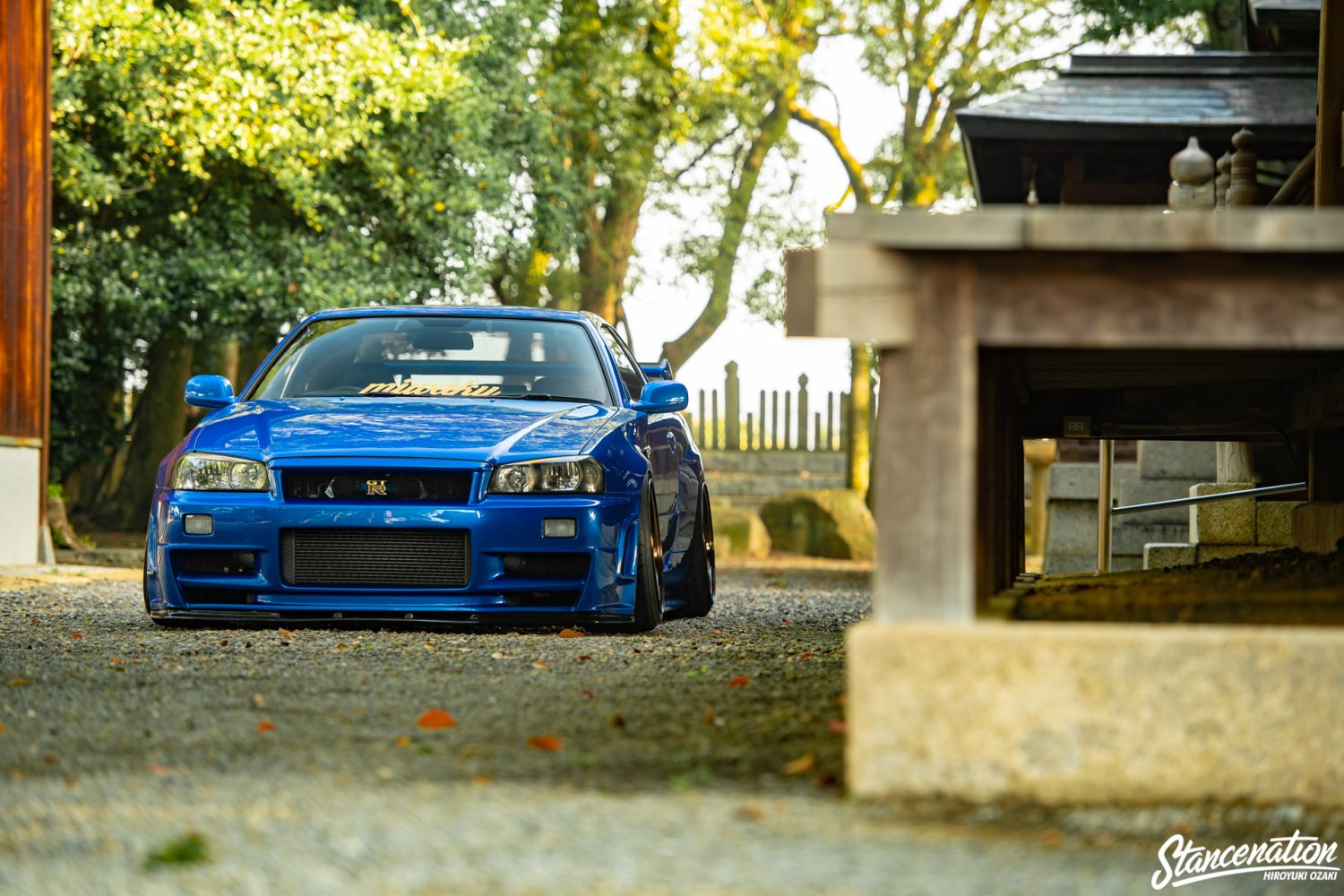 Tucking up into the fenders are a set of Work Meister S1 3-piece wheels that compliment the car perfectly.  The satin black and bronzed finished wheels come in at 18×11 -25 at all four corners and are wrapped in 255/35/18 Goodyear RS tires.  Of course, a healthy bit of camber all around helps those wheels get right up into those fenders, and get the purists shaking their fists in rage.  It all works out and looks oh-so good. 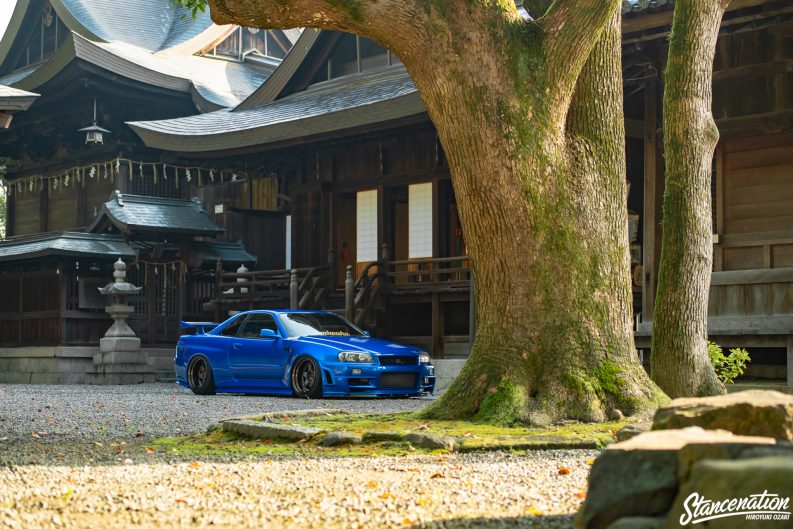 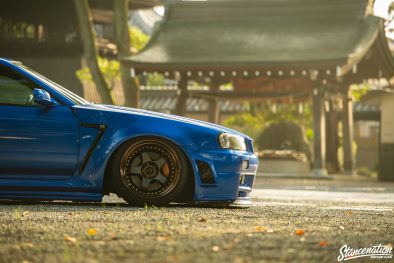 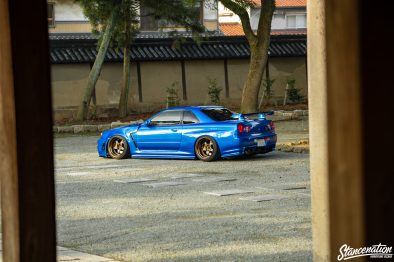 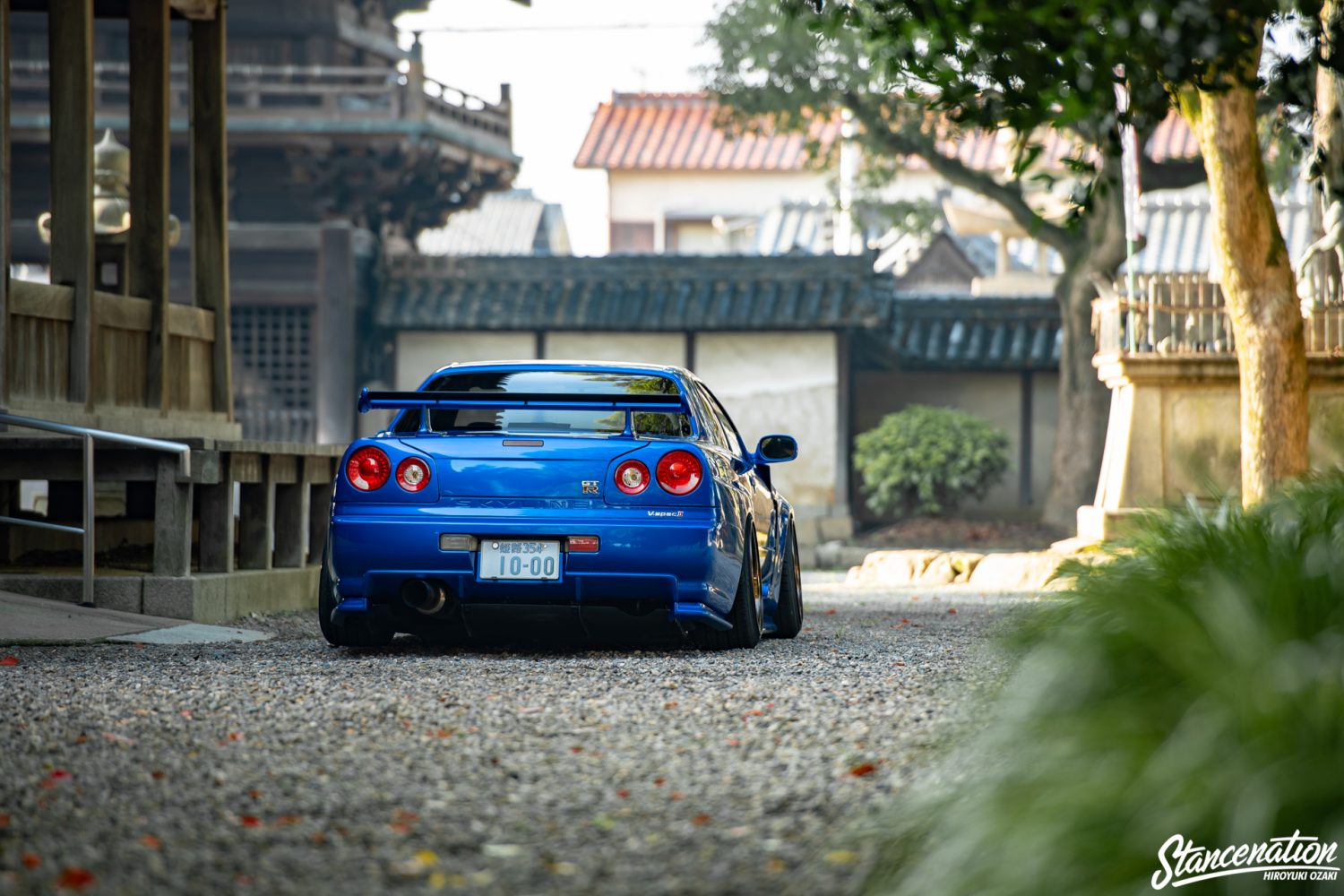 Those in the know will also realize that the body of this GT-R isn’t exactly stock either.  Reo exercised an OEM-plus look when it came to the exterior mods.  The front and rear bumpers, as well as the side skirts were switched out in favor of Nismo items.  The front fenders were also modified to accept vents from a R35 GT-R complete with matching badge.  There was also some shaving and smoothing done.  The front number plate was removed from the front bumper as well as the keyhole on the trunk which Reo mentioned was quite labor intensive.  The whole car was then resprayed in its original Bayside Blue hue. 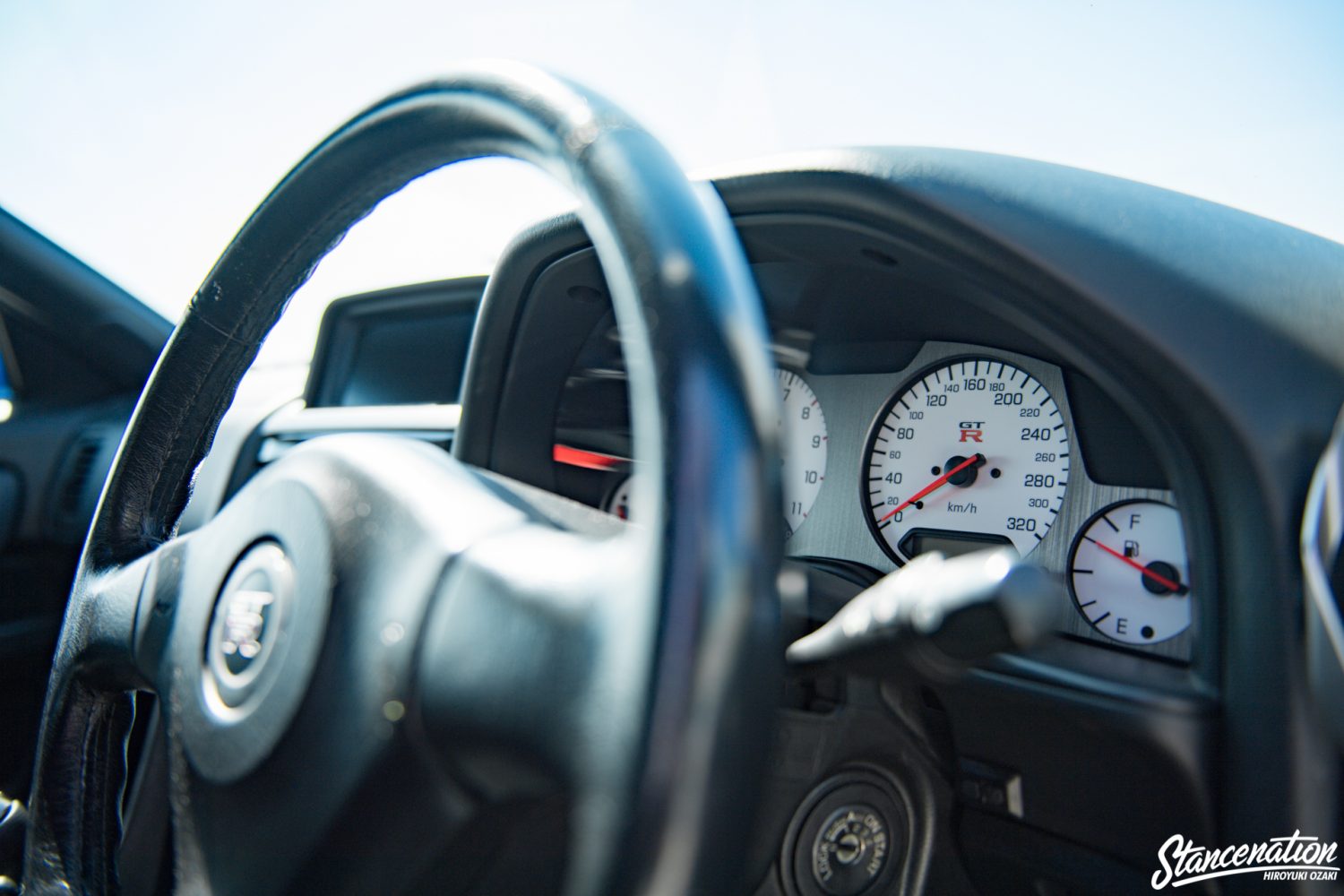 Inside the GT-R is a mix of piano-black paint and alcantra as the center console, headliner, visors, and rear-view mirror were redone.  The gauges were replaced with Nismo pieces, and all lights were replaced with LEDs.  Not much needs to be done to a R34 GT-Rs interior, but Reo wanted to keep his styling theme throughout the car, and it’s not too often you see a GT-R interior done up in more of a dress-up fashion. 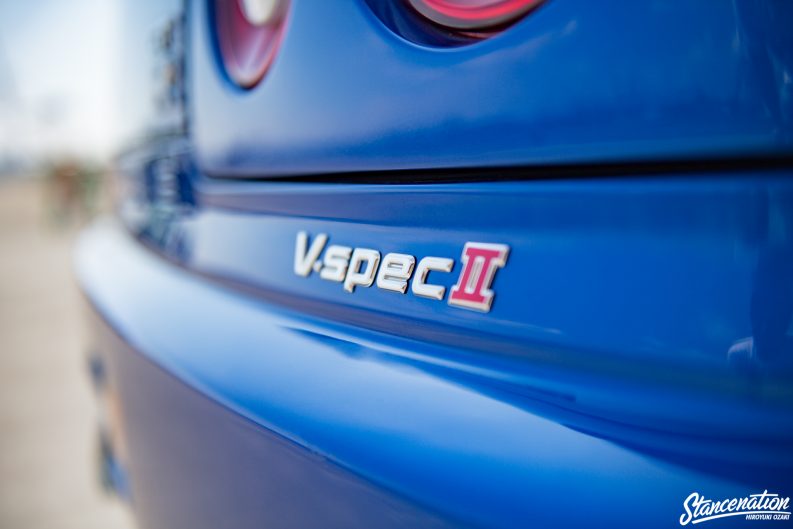 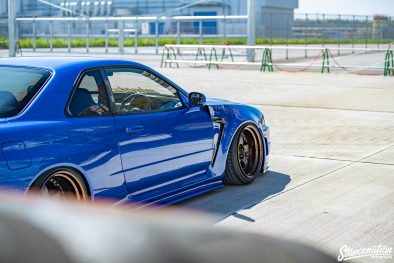 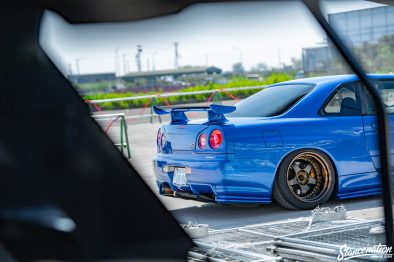 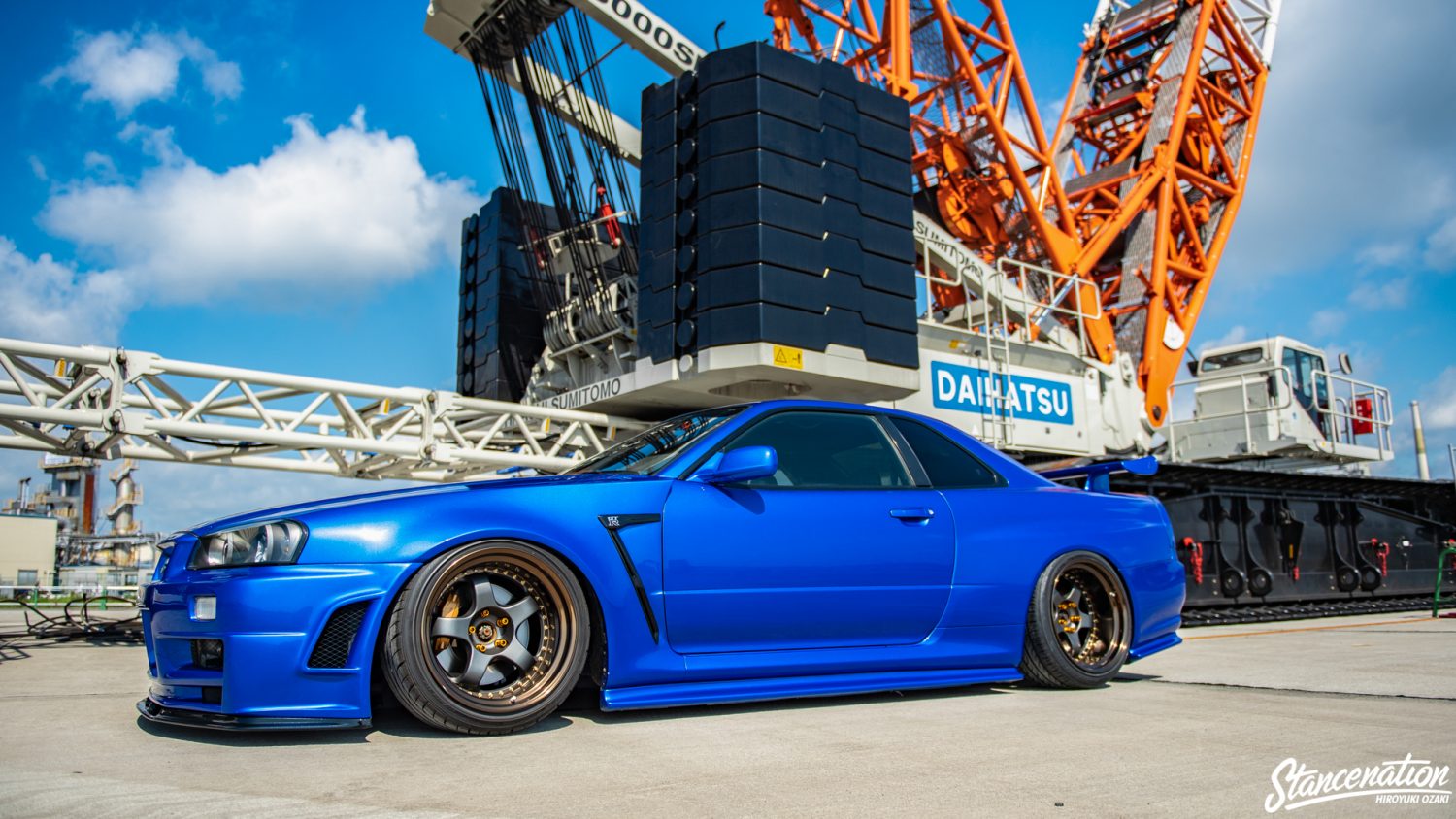 Even with the car’s heavy emphasis on styling, Reo couldn’t leave the engine alone.  It’s hard to beat the sound of the RB26, so why not enhance it a bit?  Reo opened up the airways with a Blitz air cleaner, Nismo muffler, Tomei catalyst and Tomei down-pipe and mid-pipe.  A Nismo intercooler was added as well, and a Blitz fuel pump was installed to help with the increased demand for fuel.  A Nismo twin-disc clutch makes sure the near 400hp gets to the ground as efficiently as possible when Reo decides to let the RB26 scream occasionally. 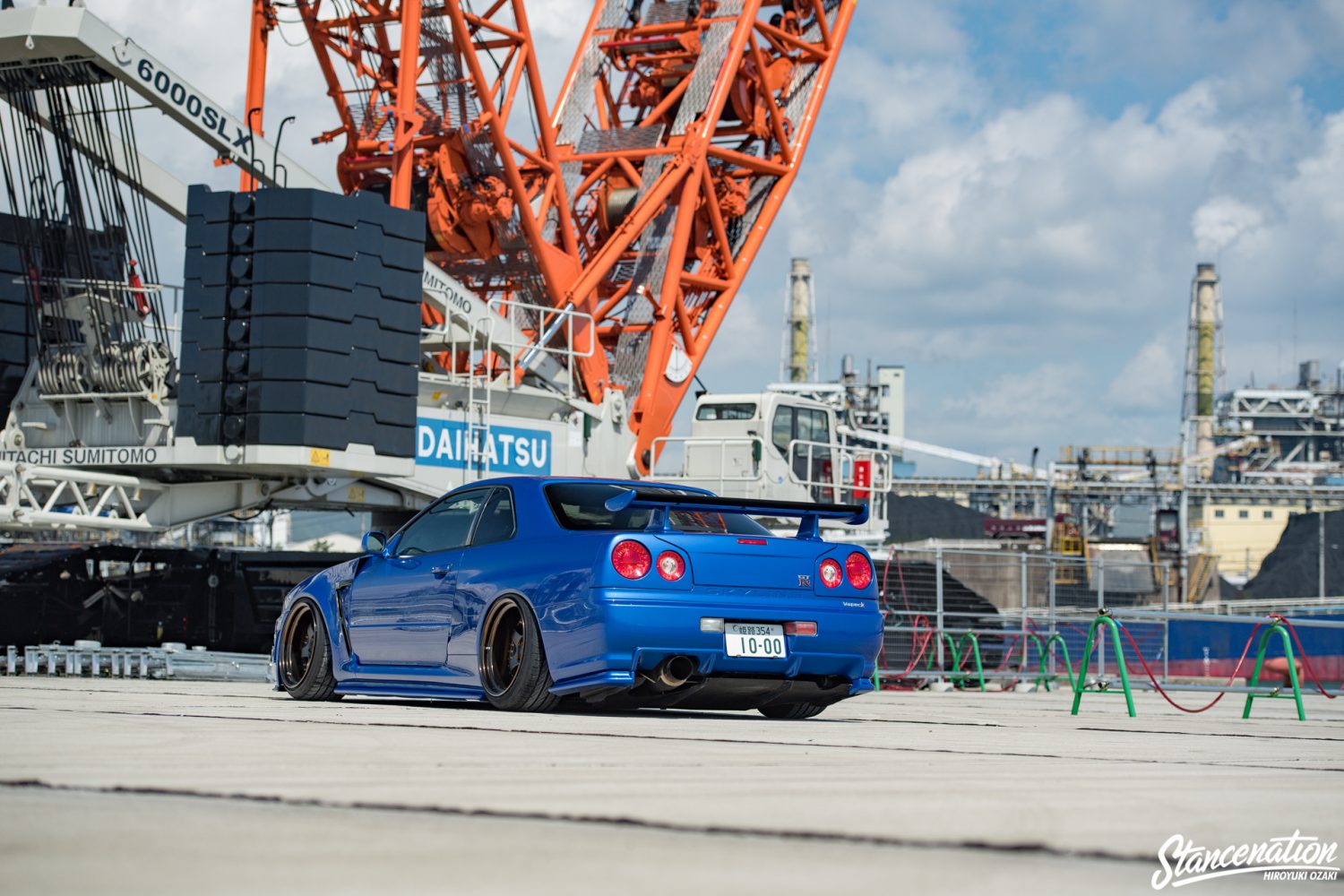 You all should know me by now and know that I love cars that cause a little bit of controversy.  This car is a great example of someone taking their dream car and doing what they want with it.  I think there’s too many cars in the scene right now that are built looking for the approval of others.  This car is definitely not that case.  The bonus is that it gets people mad, haha.  Plus, it’s refreshing to see a R34 GT-R built with the emphasis on style.  They are a great looking car, and this one looks fantastic slammed to the ground with paper-tight fitment.  I hope this car inspires more people to not be afraid to take rare, or strong pedigree cars and chop them up.  I also hope this car makes some people upset, because that’s always fun too. 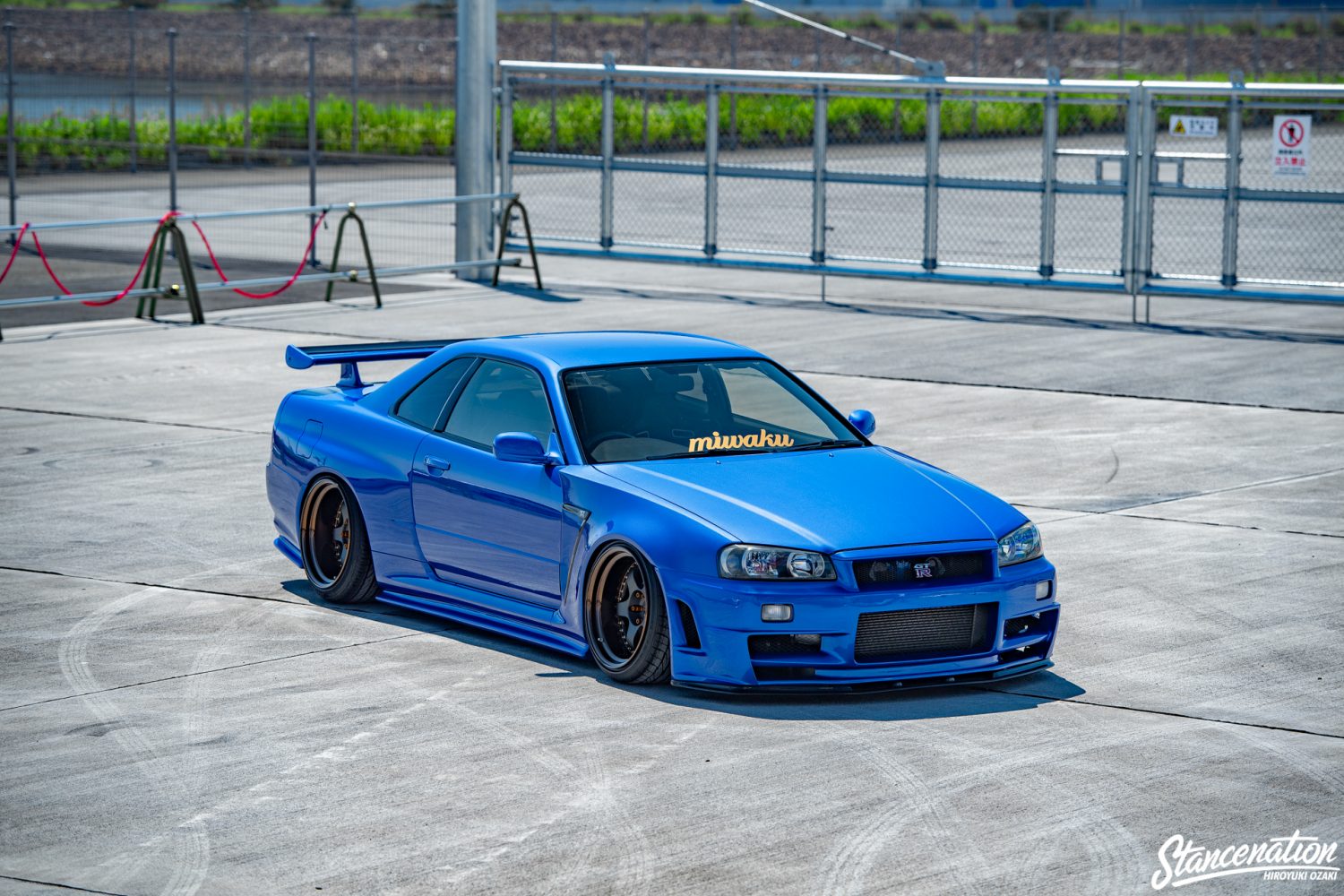 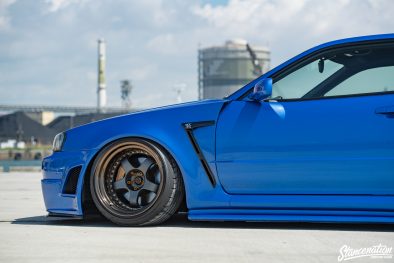 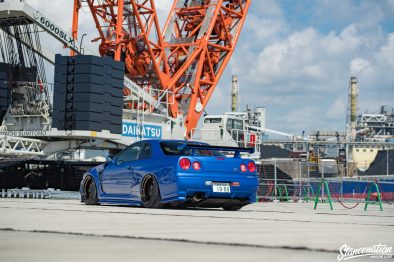 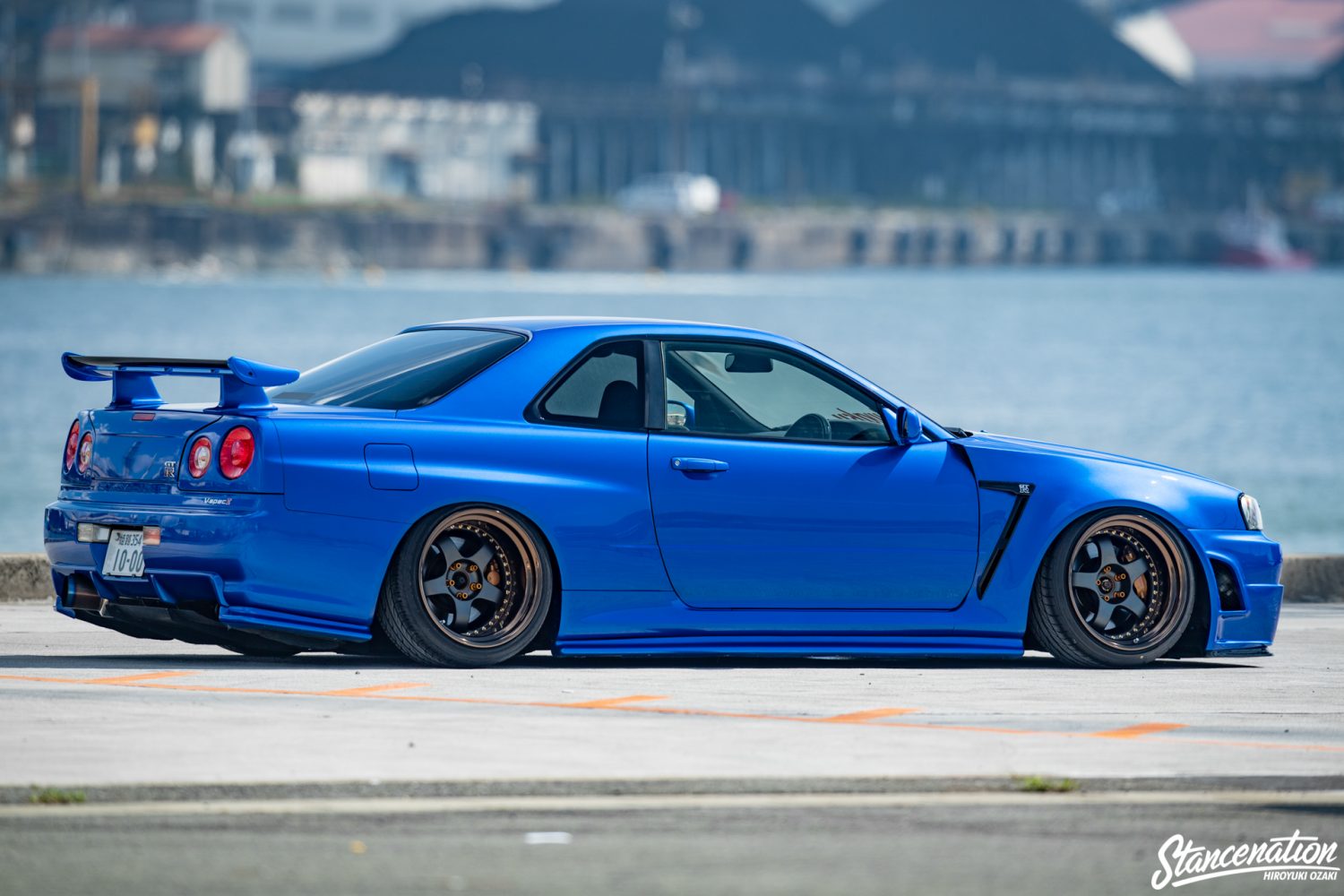