Maybe it’s me getting old, or maybe it’s me coming full circle back to when I was a little kid, and my love for classic cars, but I am one of those enthusiasts who believe that older is better when it comes to cars.  When I was a kid, I loved classic cars, especially old, American hot-rods.  I played with models and read old hot-rodding magazines, and even though as I got older and went through the stages of exotic car dreams, and making my way into the import/sport-compact scene, my love for older cars never went away. 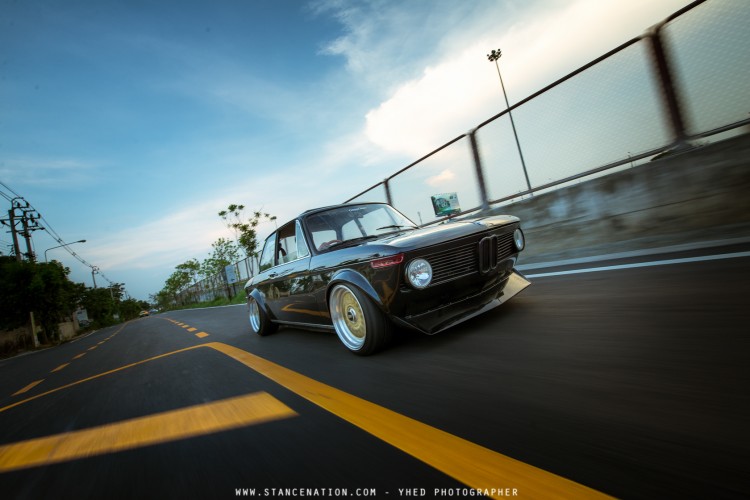 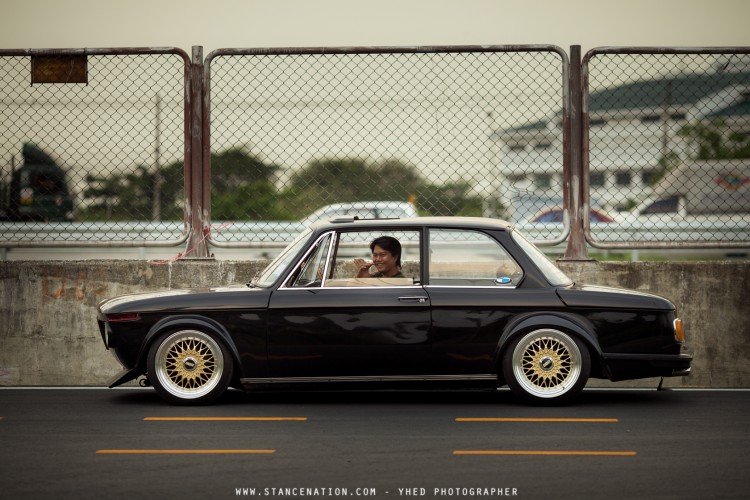 Much like Mr. Tum here, that love eventually became a need to own something old and classic.  While I went down the path of classic, water-cooled VWs, Tum had a thing for classic, Bavarian metal, and came into possession of a rather desirable 2002.  The 2002 is one of the icons of vintage BMW motorsports, carrying lots of history and heritage with it.  Just looking at the car, you can tell that it has a story, something these modern cars don’t have.  It’s something else to get behind the wheel of a car that is older than you.  It has character, it has soul, and by grabbing the steering wheel and taking it for a drive is the car’s way of saying, “sit back, and let me tell you a story…” 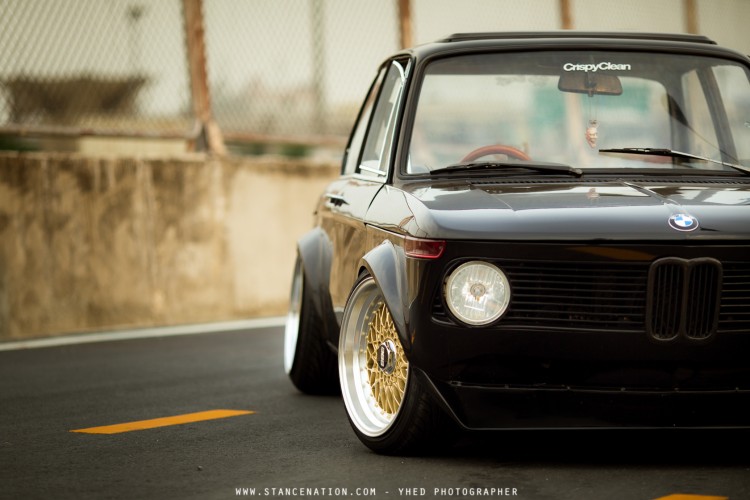 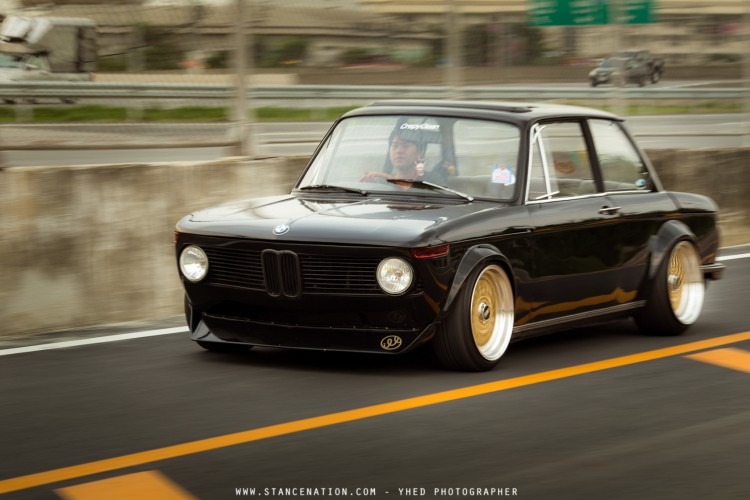 Mr. Tum and his 2002 go back 10-years, so the two have had plenty of time to build upon their story together.  Like most 2002 owners, he was attracted to the classic lines of the car, but Tum still wanted to make his own mark on the classic coupe.  While a lot of 2002 owners prefer to preserve their cars as BMW made them, there is still a large camp that like to really tap into the car’s motorsports heritage.  While this particular 2002 has wheels a little wider than the purists prefer, and tires a little narrower than the racers like, it’s still safe to say that this wide-fendered coupe doesn’t get driven the way it is meant to. 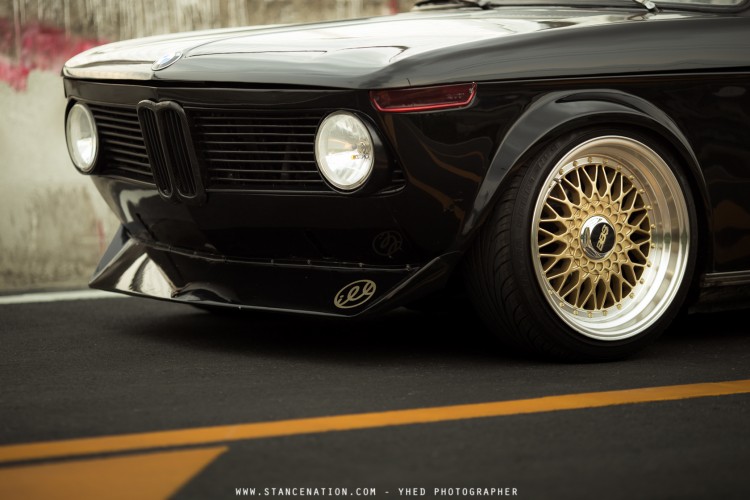 With plans to fit some rather wide wheels under the small coupe, Mr. Tum decided that the best solution for the fenders was to make his own.  This also helped satisfy his goal of standing out from the other modded 2002s out there.  He certainly has a lot more confidence than me because I would be pretty hesitant to take an angle-grinder and cut-off wheel to a car like this, but I’m glad he did because this is one pretty car to look at.  The wide fenders are certainly aggressive, but they don’t take away from the car, and flow really well with the rest of the body.  They don’t look like they were just stuck on to fit some crazy wheels.  There’s more custom bodywork hidden on the inside of the chassis as well to help with fitting the rollers Tum was planning on running. 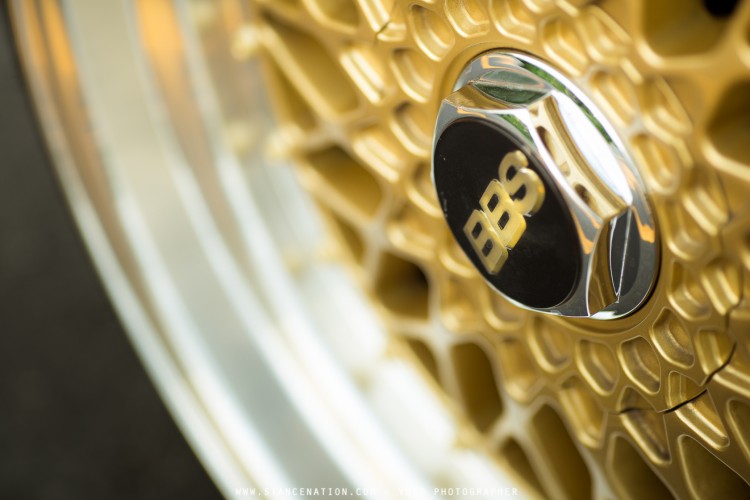 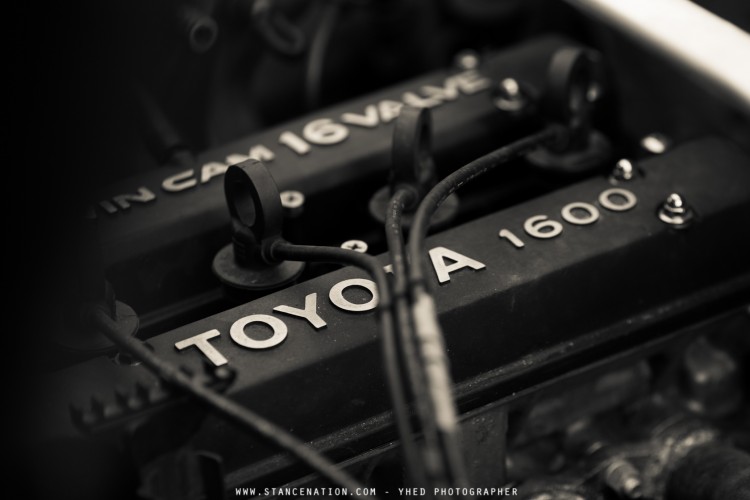 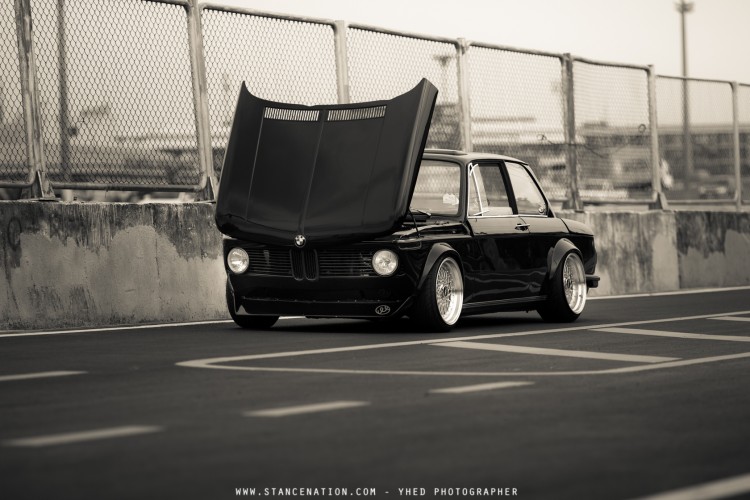 BBS RSs are a classic choice for most classic, European cars.  There’s no way to argue that they don’t look good.  While they seem to be more popular than ever, they just fit well with the older cars.  As I mentioned earlier, Mr. Tum did quite a bit of bodywork to fit these RSs, and I don’t think I’ve seen such specs on a 2002 before.  17s are obviously a little large for such a small car, but the fenders make them look at home, however the massively wide fenders were made to house the widths of these steamrollers.  These RS211s come in at 8.5″ wide up front with a +20 offset, and 10″ wide in the rear with a +25 offset, and with 25mm and 38mm adapters front and rear, that brings effective offsets to -5 and -13 which is pretty bonkers for a 2002.  With 205/40/17 and 215/40/17 tires stretched around the gold and polished hoops, the lips tuck up nicely under those custom arches thanks to a custom, coilover suspension that Tum built himself.  You’ve got to love the ingenuity of the builders in Thailand.  If there isn’t an off the shelf solution, they’ll just make their own! 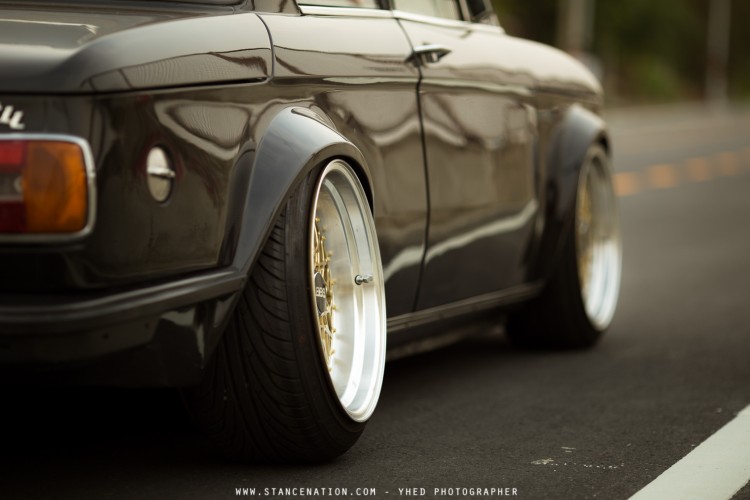 The interior of this car is just as BMW made it nearly 40-years ago, the addition of a Momo steering wheel and reupholstered leather seats bringing the interior up to snuff for Tum.  The engine, however, will have the purists giving another frown of disapproval next to the car’s fitment.  Instead of a BMW heart, you’ll find a rev-happy, 1.6L Toyota 4AGE 16-valve engine.  Why this engine over something more period-correct and BMW?  Well, Mr. Tum didn’t really explain that.  All I can say is that it really ties in with his being different in the 2002 crowd.  Also, the 4AGE definitely won’t take away from the car’s quick and nimble drive characteristics, since the 2002 would normally house a 2.0L 4-cyl producing about the same power as the 1.6L Toyota motor.  I bet it still makes for a fun drive, and produces some awesome noises. 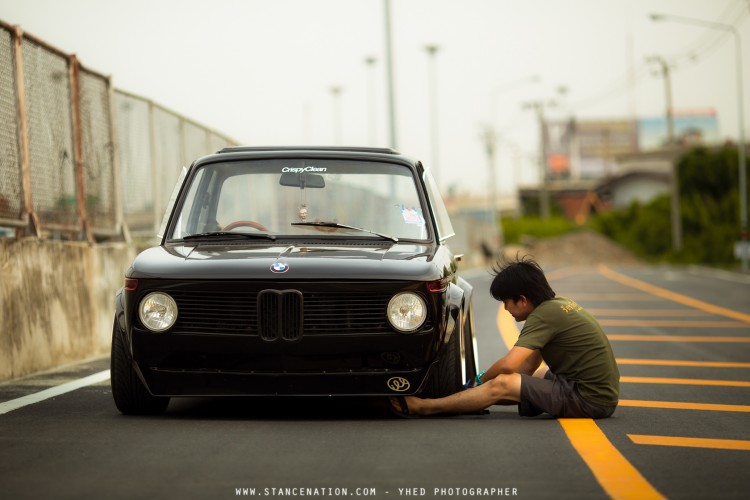 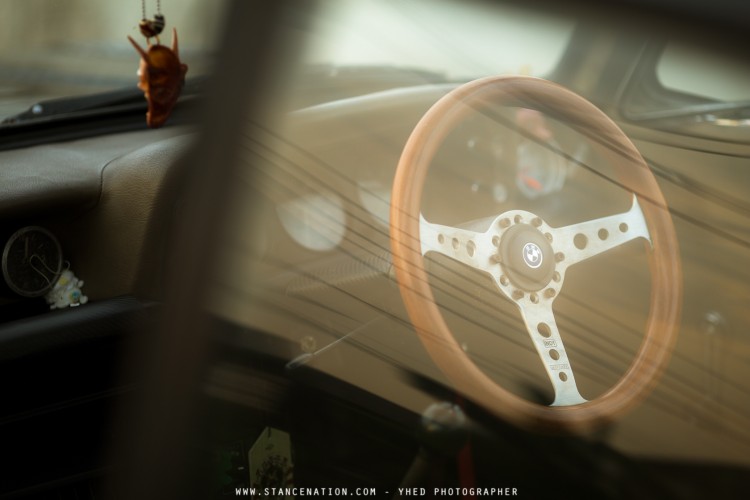 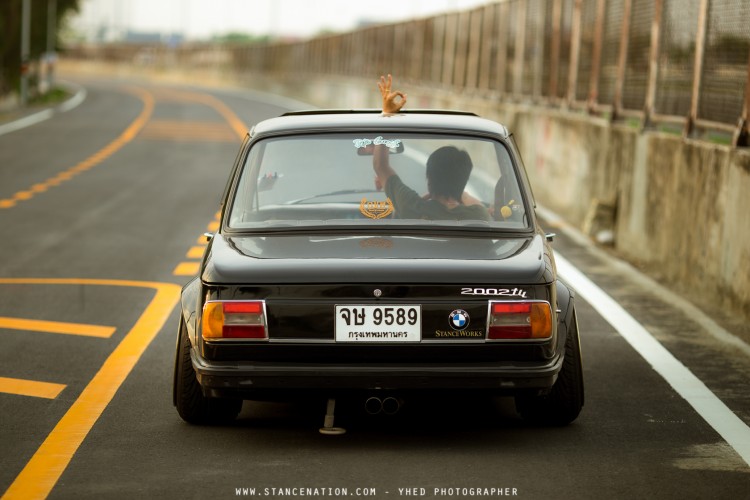 And awesome noises generally lead to fun and spirited drives, which to me is the real beauty of owning a classic car.  Getting out and spending some time with the car, letting it tell you its story, while you two inadvertently add to it.  The noises, the shakes, the rattles, it all adds to the driving experience.  Cars like these aren’t just wheeled up to be parked up in some parking lot to let others stare at them.  They get taken out to be driven, because the more you drive cars like these, the more you fall in love with them.  Sure, the work may be a little more involved and up keep more tedious, but that just makes every time you take a drive in a car like this a lot more enjoyable, and Mr. Tum certainly enjoys driving his 2002.  I’m really glad to share a feature like this with you all.  I hope we can bring you more classics here at S:N because they have some really interesting, and cool stories to tell.  Till next time. 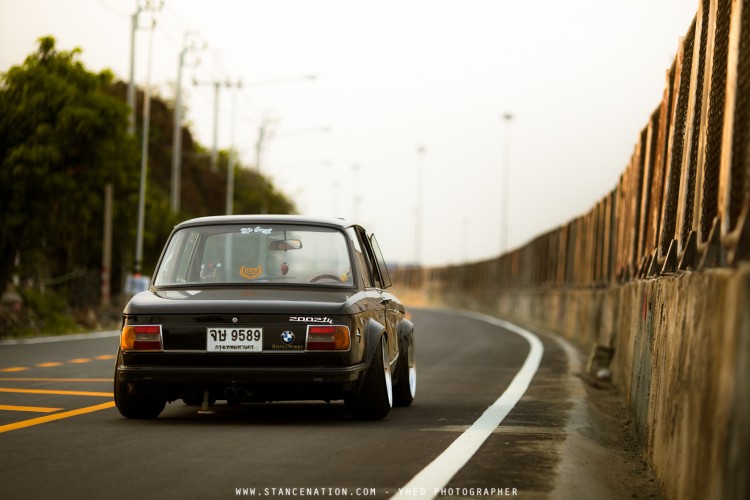 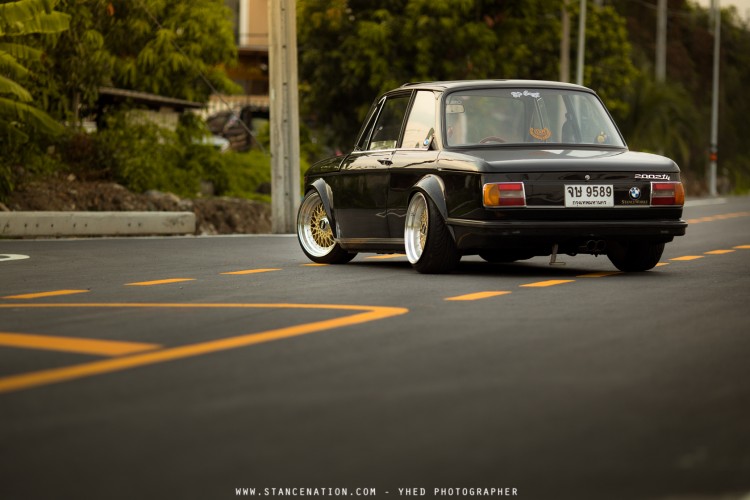 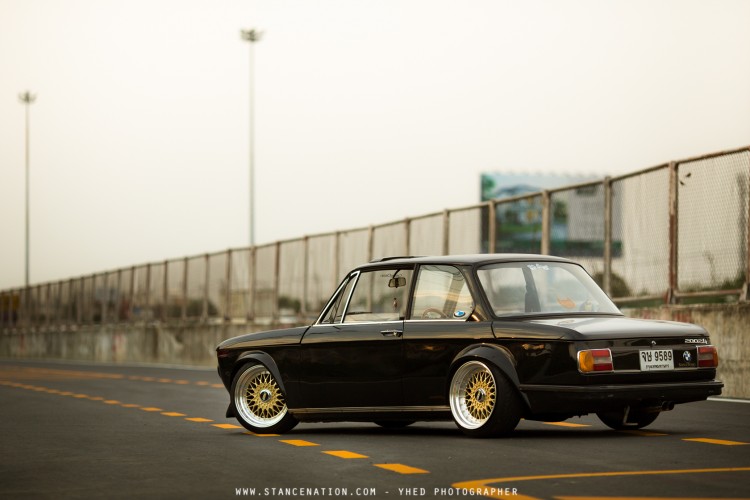 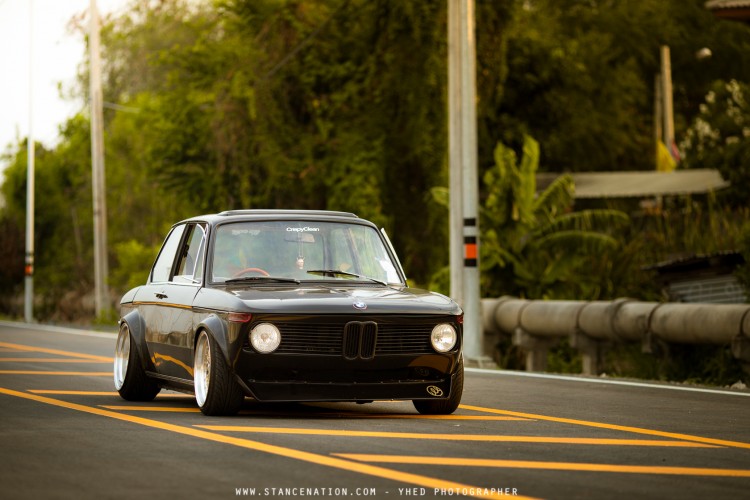