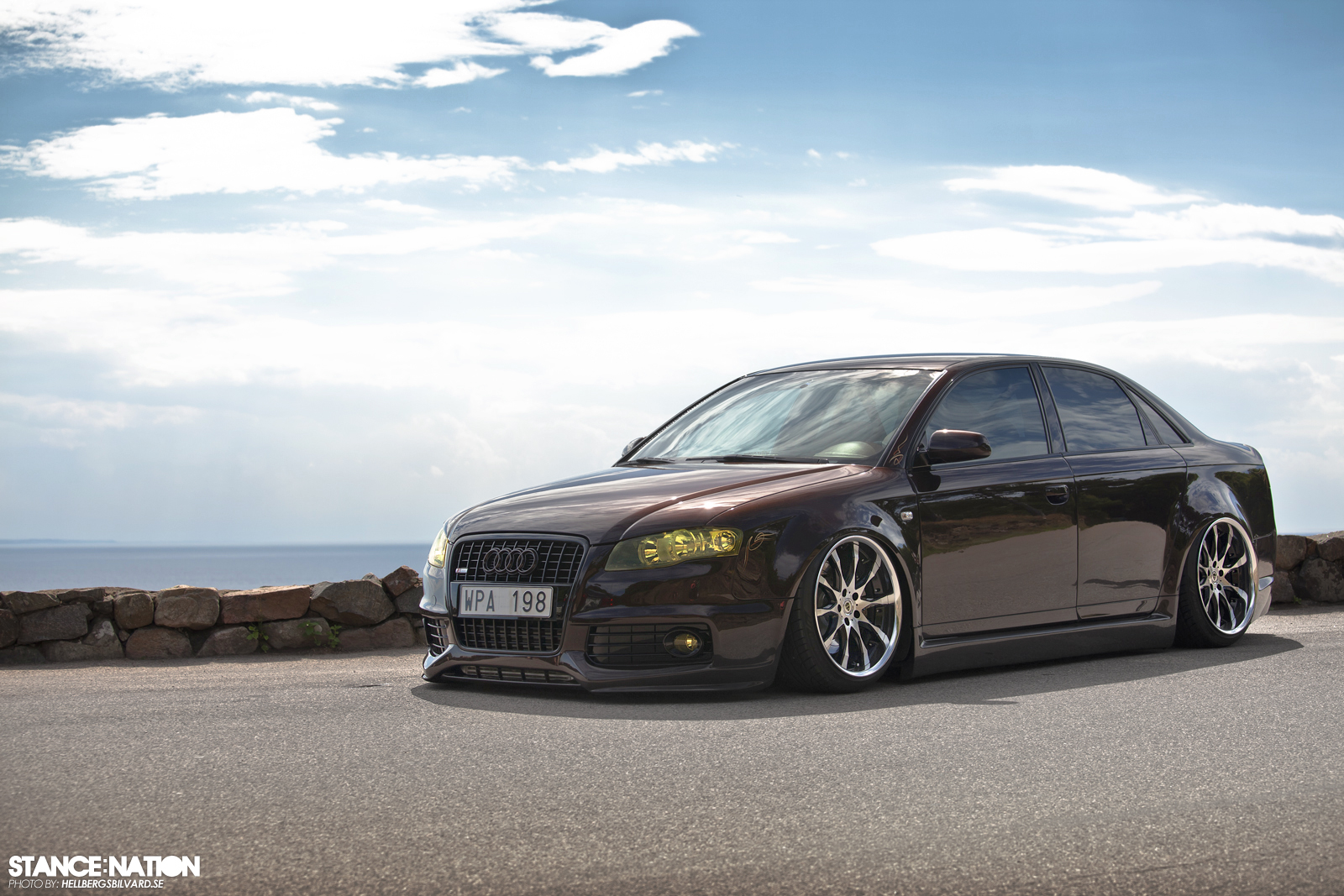 With dozens of “stance oriented” blogs out there, you’ve pretty much seen it all by now. Euros, Domestics, and Japanese equipped with BBS’, Volks, and everything in between really. Standing out from the crowd seems to be tougher and tougher, especially with all the blogs and forums out there. We’ve been seeing a surge of people trying really hard to differentiate themselves. Some go for the flashy paint and/or somewhat uncommon wheels, while others simply choose to mod a car that isn’t really known too well in this “fitment scene“. In some cases you’ll even find guys like Christoffer Geiros out of Sweden who went the extra mile. He could have easily followed the crowd and did what has been done 100’s of times before, but he didn’t. Instead, he created something that directly reflects his personality and at the same time shows that you can still stand out from the crowd without overdoing things. Allow us to introduce you to Christoffer Geiros and his incredible Audi A4. 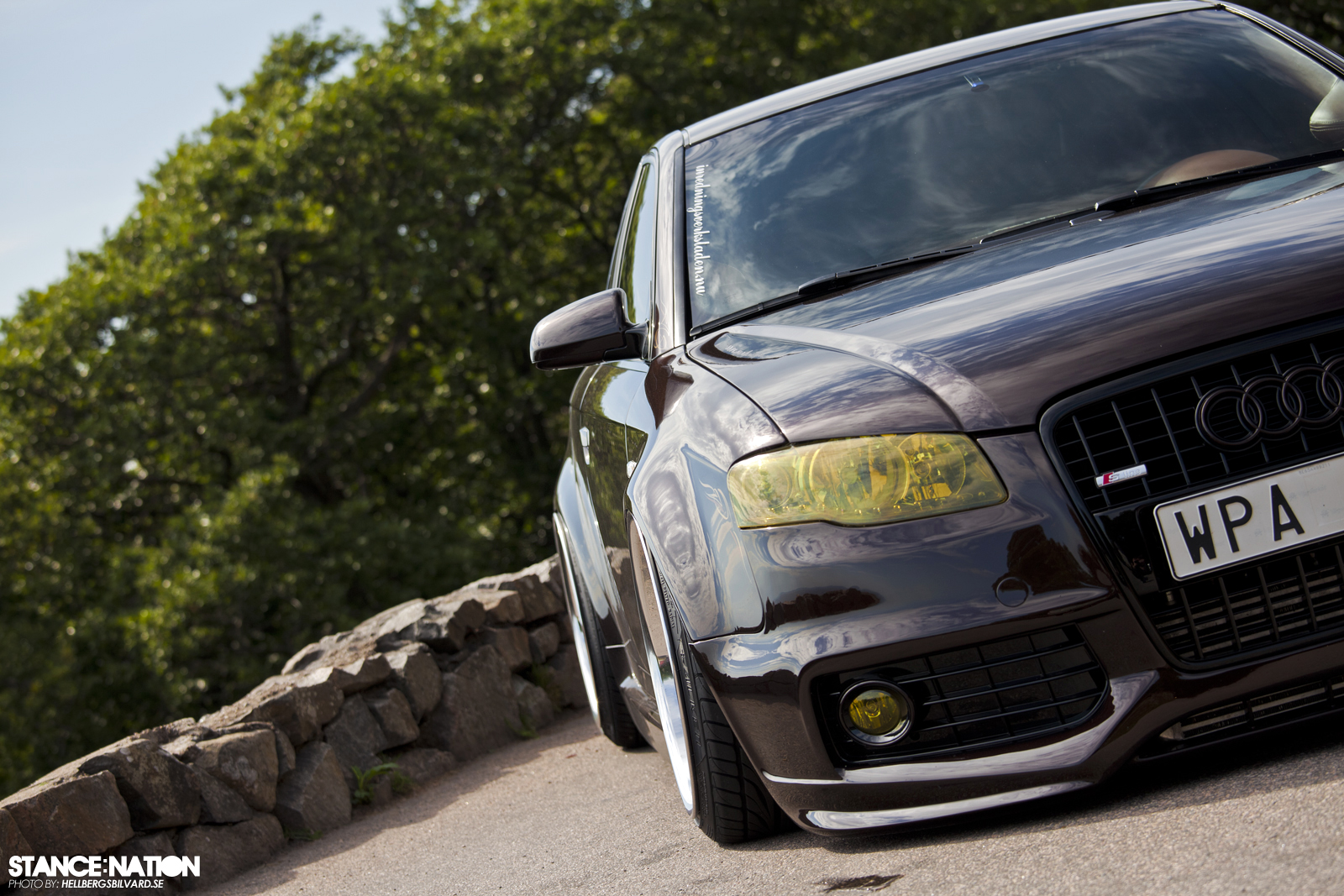 One of the things that makes this scene so hard to understand for “others” is the occasional lack of personalities. People are building cars to satisfy others not themselves, no matter the price they have to pay. Don’t get us wrong though, there is nothing wrong with building a car with the expectation of your peers thinking it’s cool, just don’t forget to build a car for yourself first. In this case, Christoffer really blew us away with the amount of details that many would never know if they weren’t told about them. First and foremost we’ll start with the exterior. Christoffer combined several parts from other Audi models (Audi A4 B8, Audi S5, Audi A4 B7, Audi A5 and Rieger Audi A5) to create that “perfect” kit that he had first envisioned. For the sides kirts, he turned to a Volvo V70 because as we all know, the Swedes love their Volvos! He finally had the car painted “Java” brown which can be seen on the 2011 Saab 9-5. 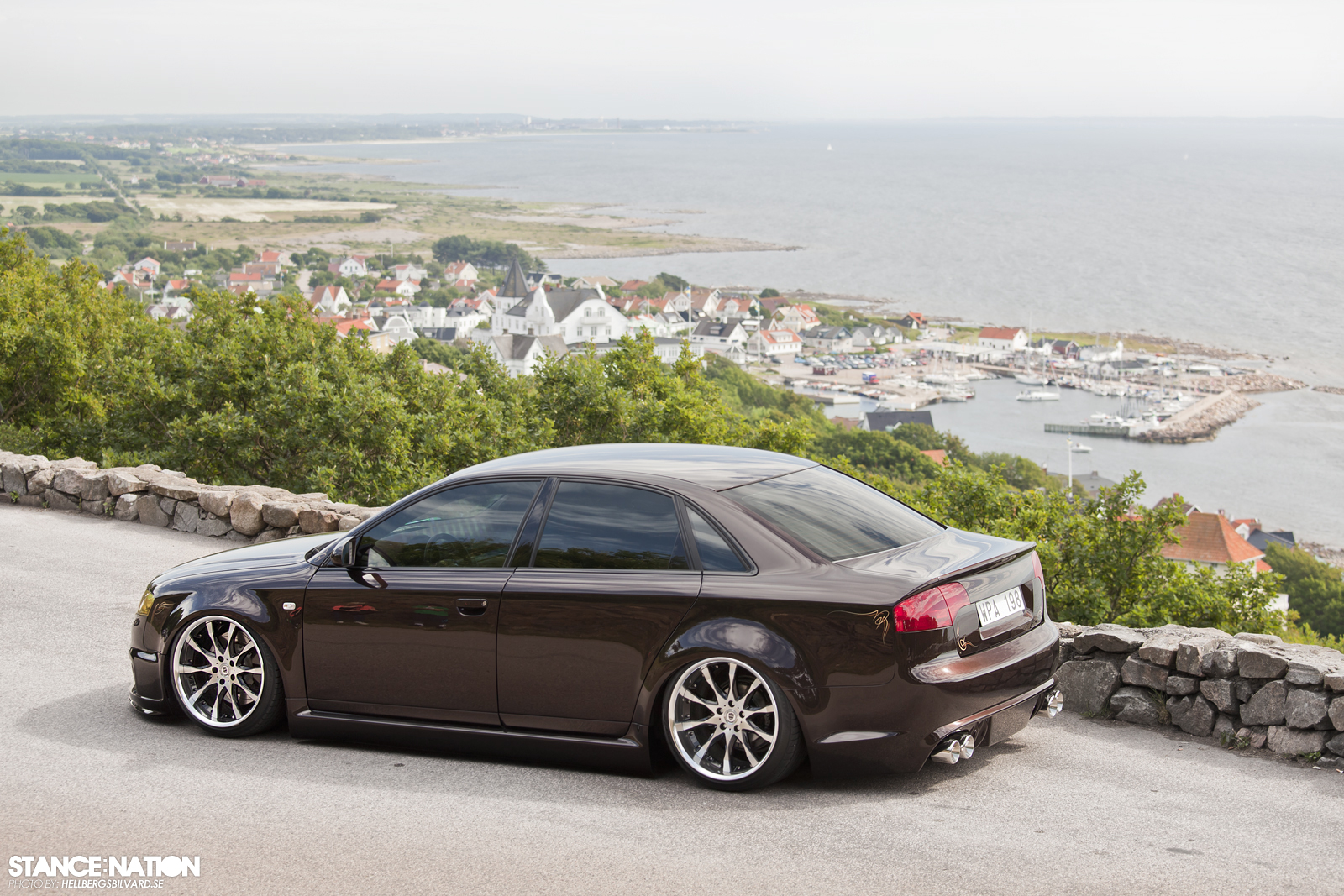 Where this car shines the most however is it’s interior. When we spoke to one of Christoffer’s friends, he told us that there are literally about 1800+ hours in it. Judging by the photo below, it’s pretty obvious that Christoffer is one of those “perfectionists”. You see, other then the floor & dash, every little thing inside the beautiful A4 cabin has been redone. Everything has been covered in special high-end leather and fabric, including the aluminum roll cage that was purchased from Wiechers-Sport in Germany. But don’t think that’s all this Audi has going for it. Our friend Marcus tells us that the sound system can literally be heard from miles away. Hit the Read More button for more photos and specifications. 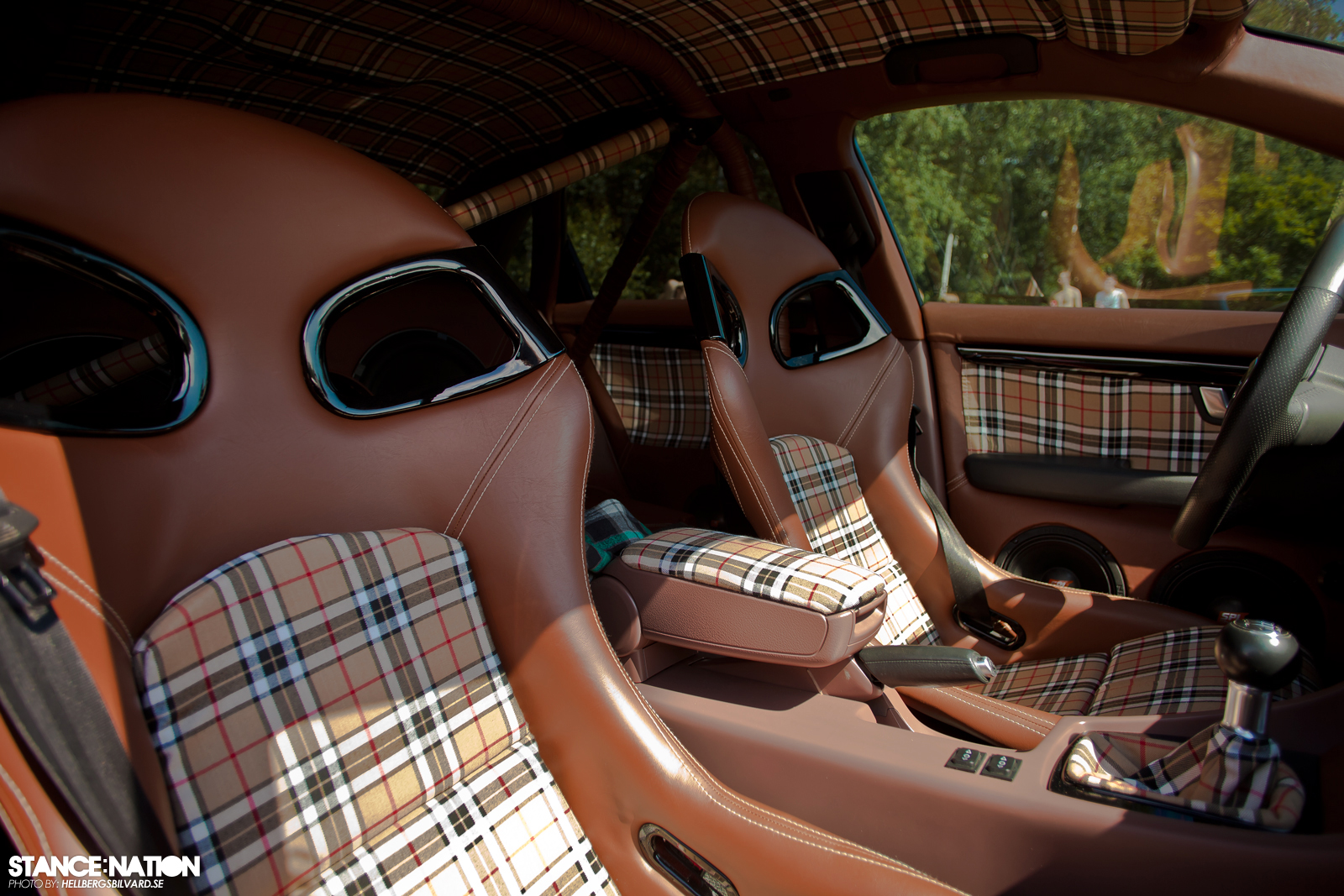 No you’re not seeing things, those are indeed 3 pairs of 8″ speakers in the front doors. What you don’t see in these photos unfortunately is the 2 pairs of 6.5″ speakers in the rear doors & 2 more pairs of 6.5″ speakers mounted in it’s trunk. What you can see fortunately is the photos below. Those would be and 2 15″ subs. Powering all this work of art are 4 2-channel amps & 2 4-channel amps. On top of that he also has one humongous mono amp. There are also 6 Stinger SPV70 batteries and dozens of feet of hidden wires. We’ll admit that we’re not the biggest audio freaks, but this right here gives us chills. 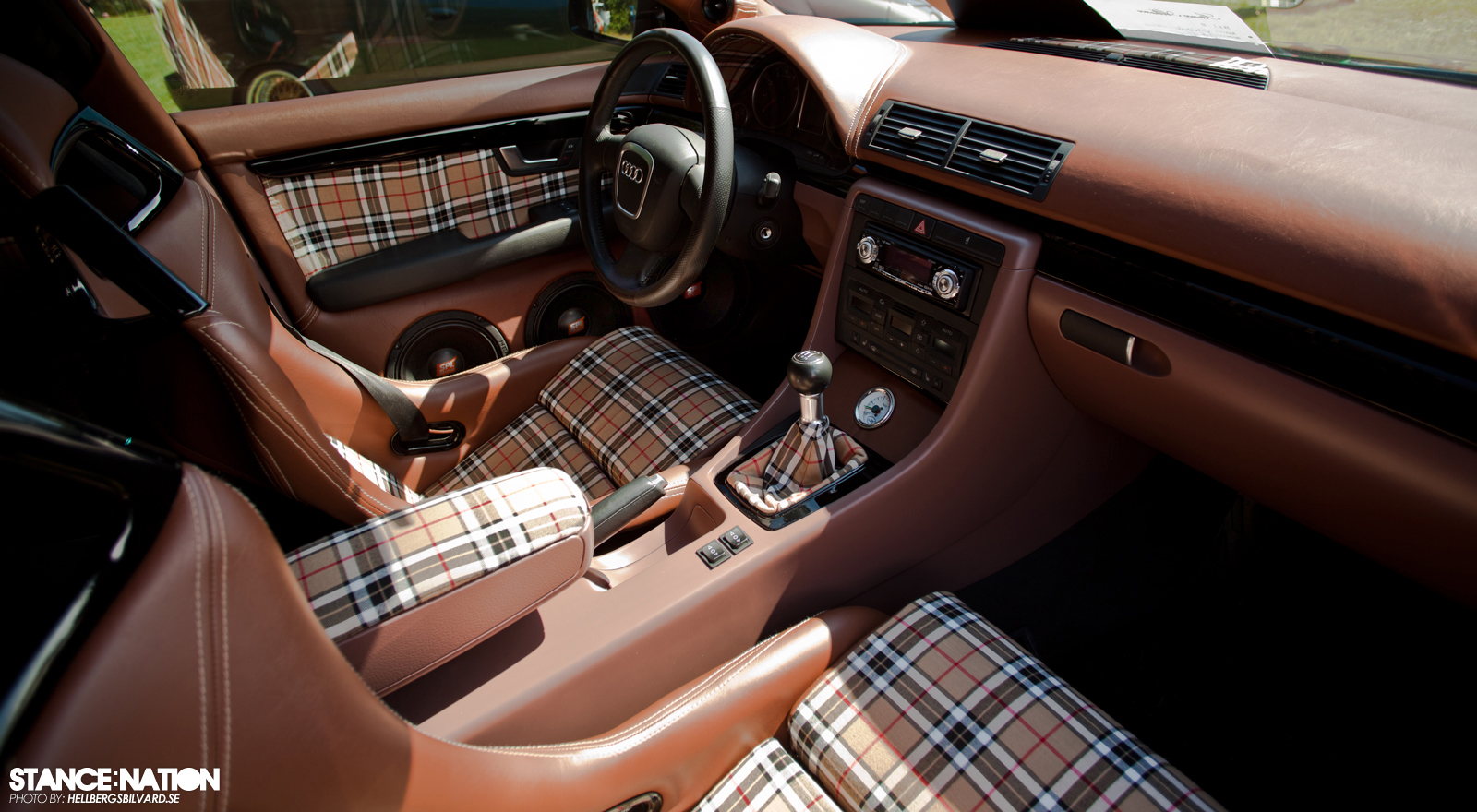 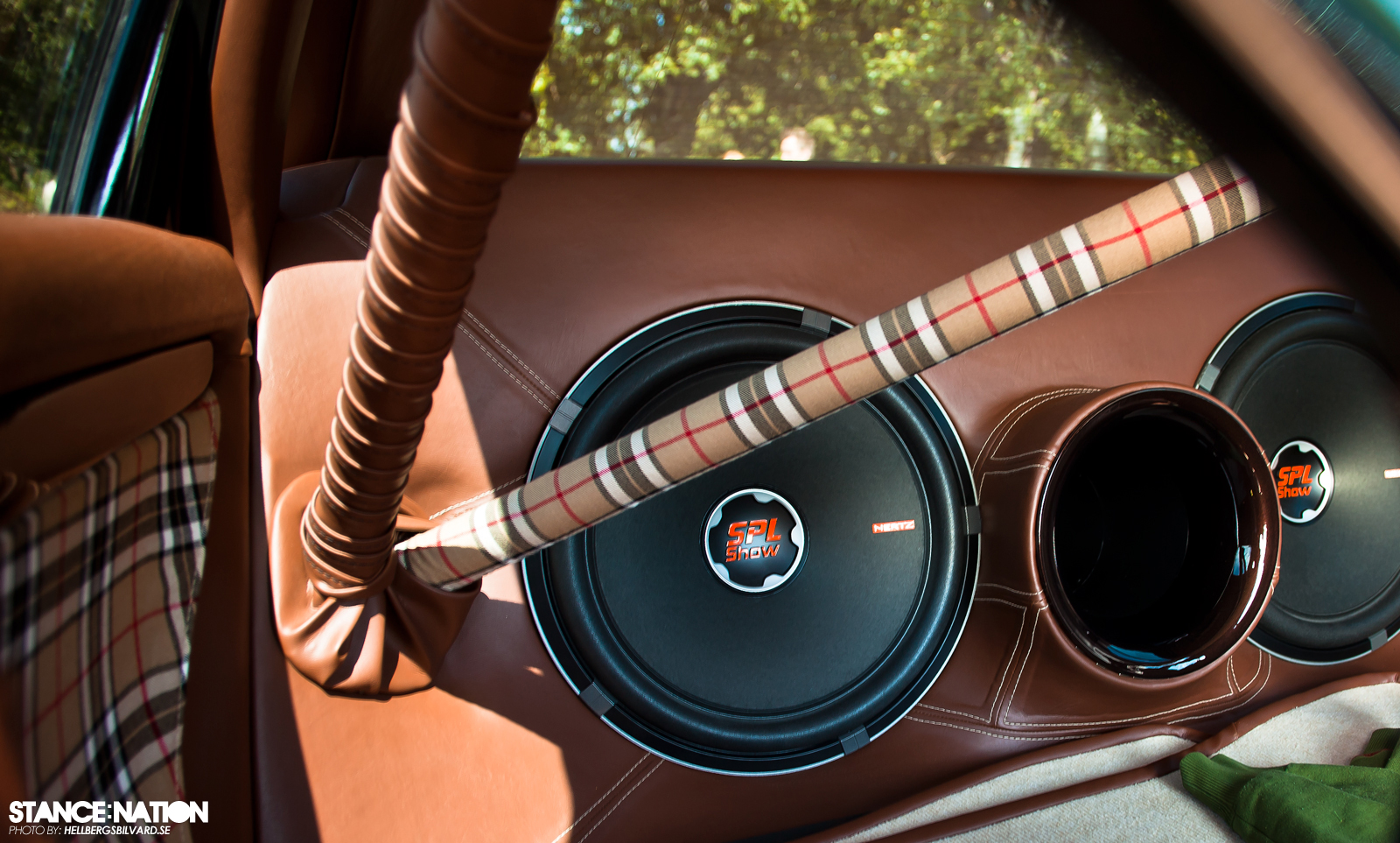 We then come that awesome fitment. Christoffer is all about trying new things so instead of being just anther “fitted” Audi, he went with the Work Schwert SC2 wheels and wrapped them with Falken Tires. Fronts are 19×10.5 (+5) with 235/35/19 tires while the rears are sitting at 19×11 (+10) with 245/35/19 tires. Now someone correct us if we’re wrong, but isn’t that extremely aggressive for these cars? 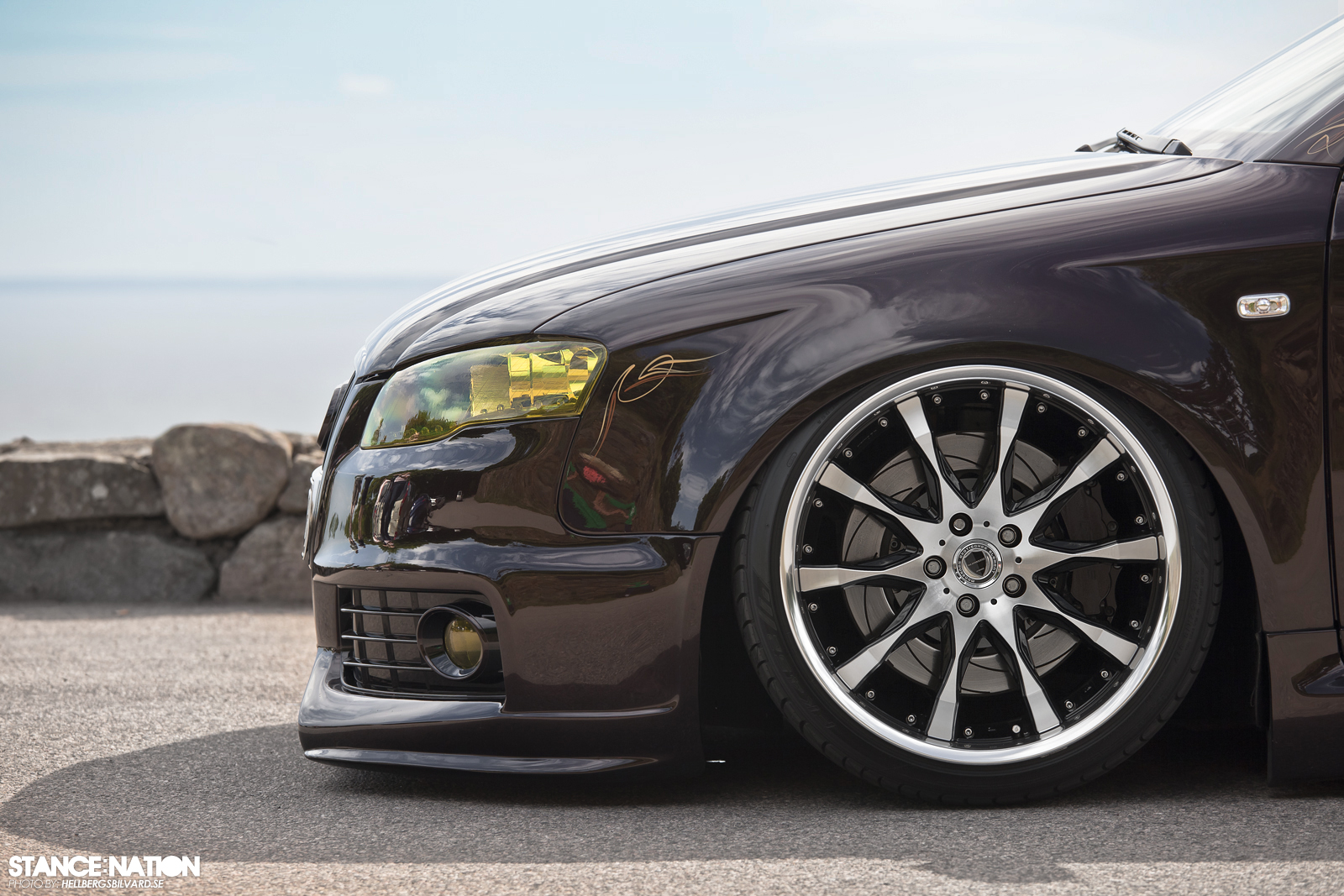 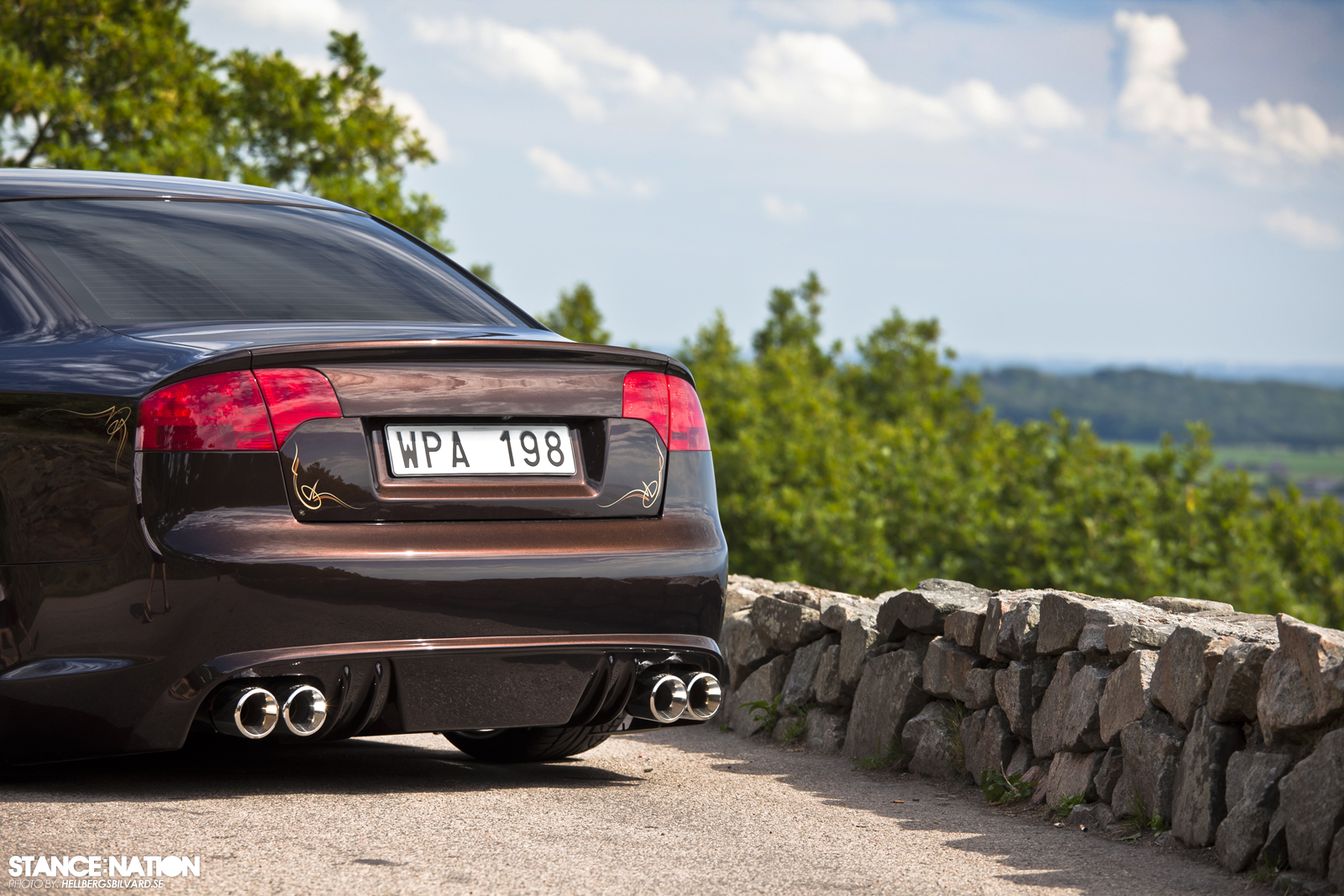 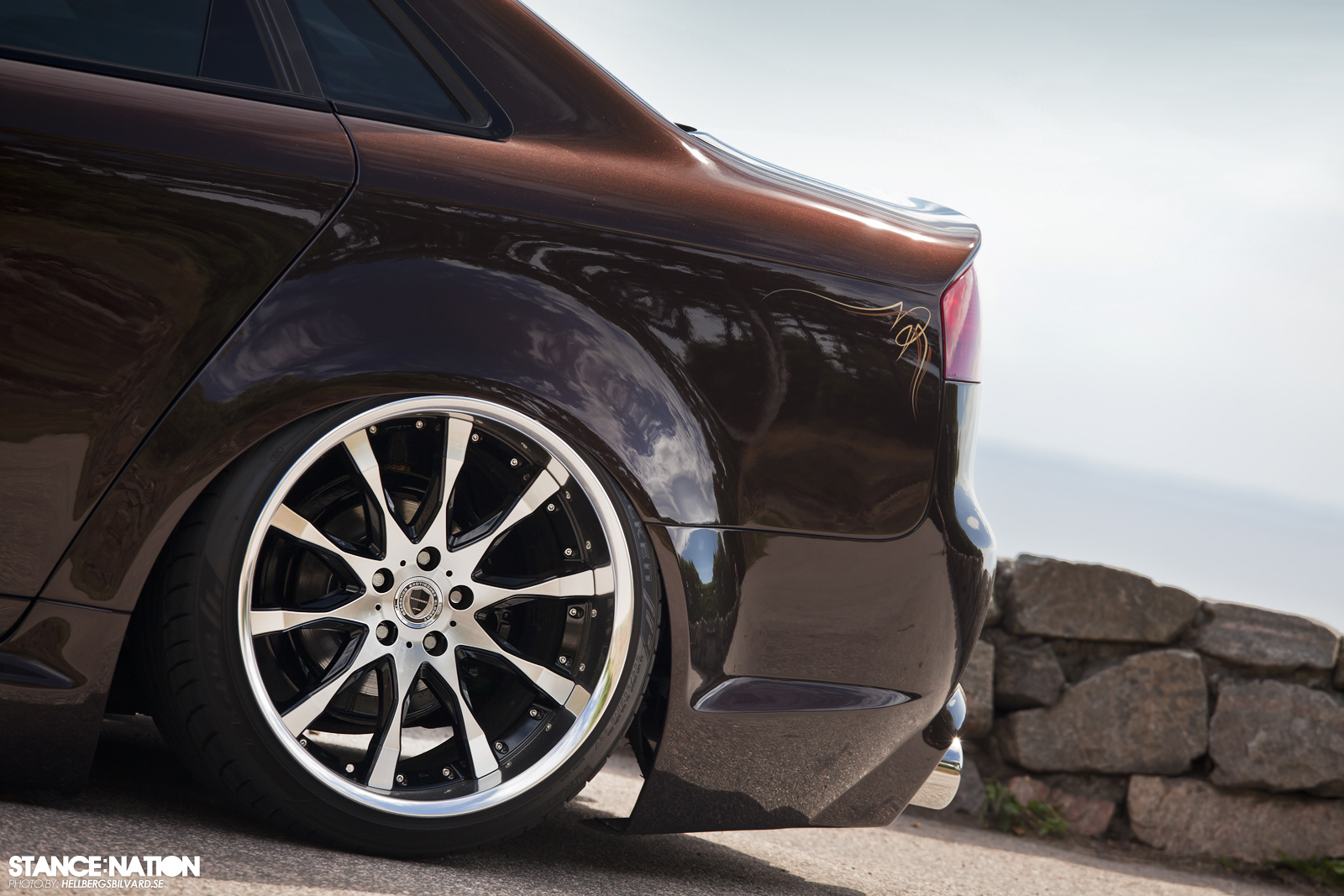 It’s sitting on (G.A.S.) German Airride systems V1 with koni shocks. Front & rear airbag mounts were redone by Christoffer to give him exactly what he wanted, the famous “Lip/Fender” fitment. He is also rocking 2 Viair 460c compressors and a 3 galon tank. Now we all know that there are a few of you out there that tend to look down on “bags”, but when a bagged car sits as proper as this, it deserves all the respect. Christoffer also rolls pretty damn low, just check out the photo below of his “driving” stance. 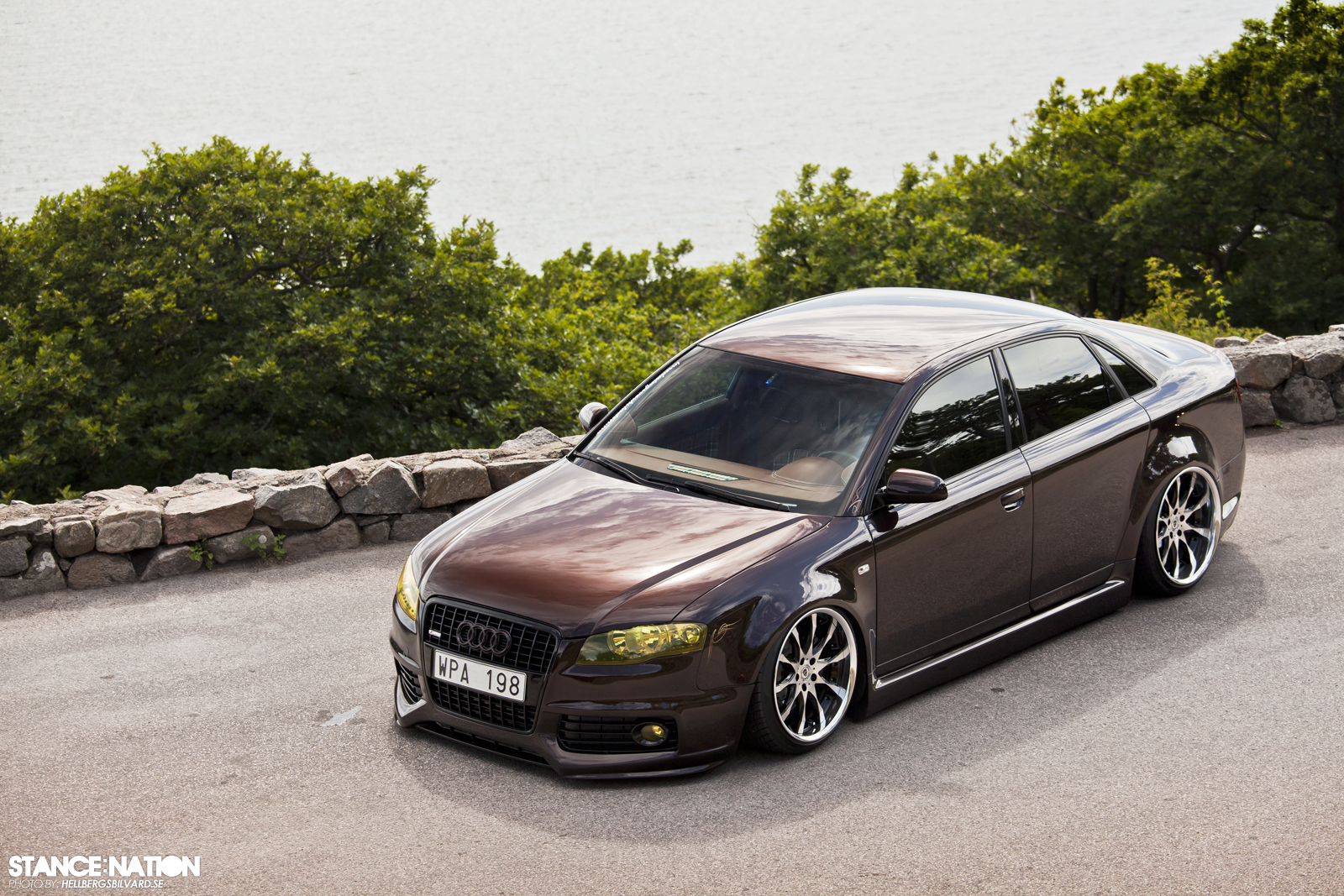 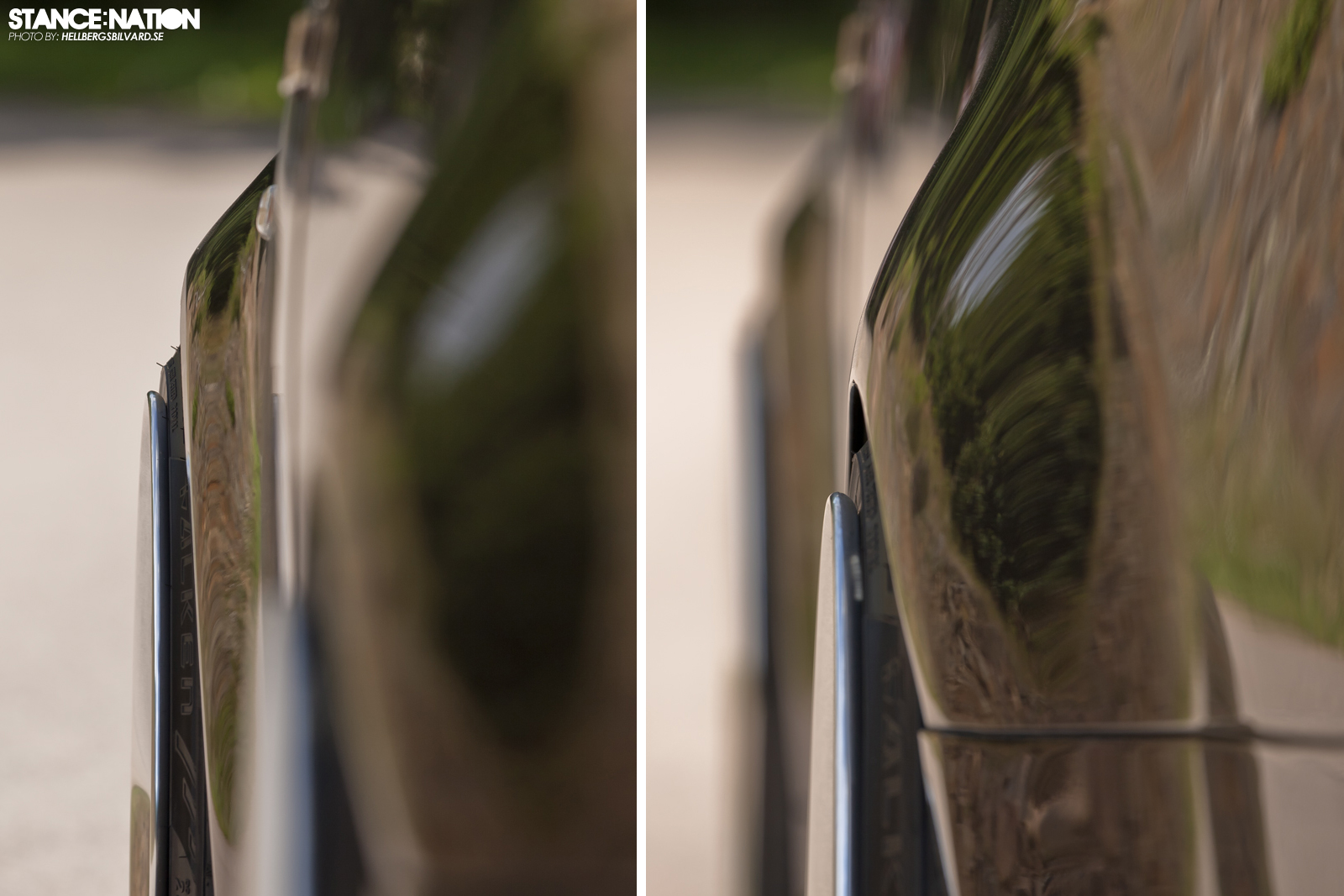 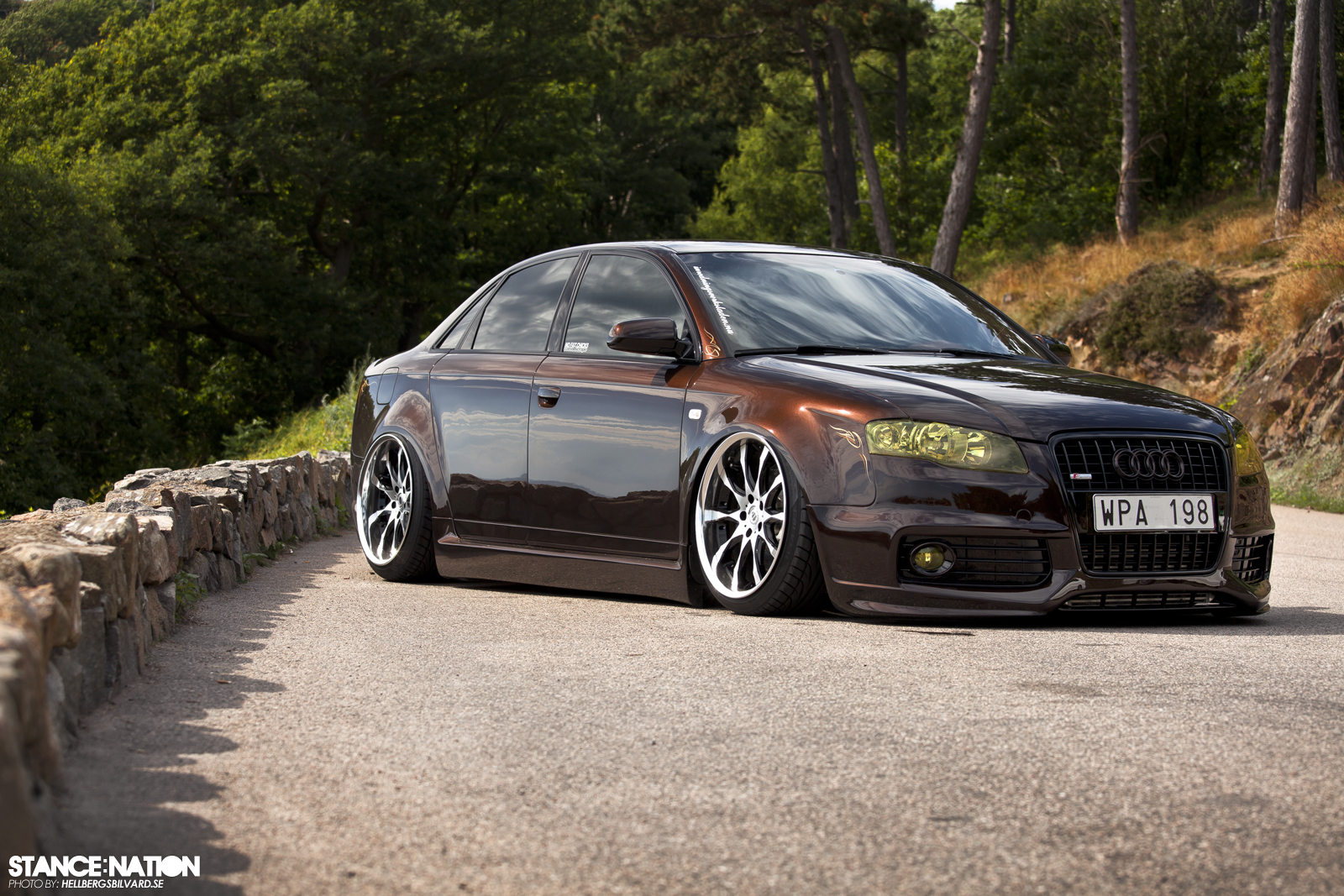 With all that said, we would like to give a huge shout out to Christoffer for being as innovative and open minded as he is. You’ve built a car that will be admired by thousands of people across the world and we’re honored to be that “bridge” in between. We hope that Christoffer’s ride inspires and motivates you to step out of your comfort zone at times and try something new. Old or new, domestic or foreign, don’t let anyone’s opinion influence your decision. Do what makes you happy. 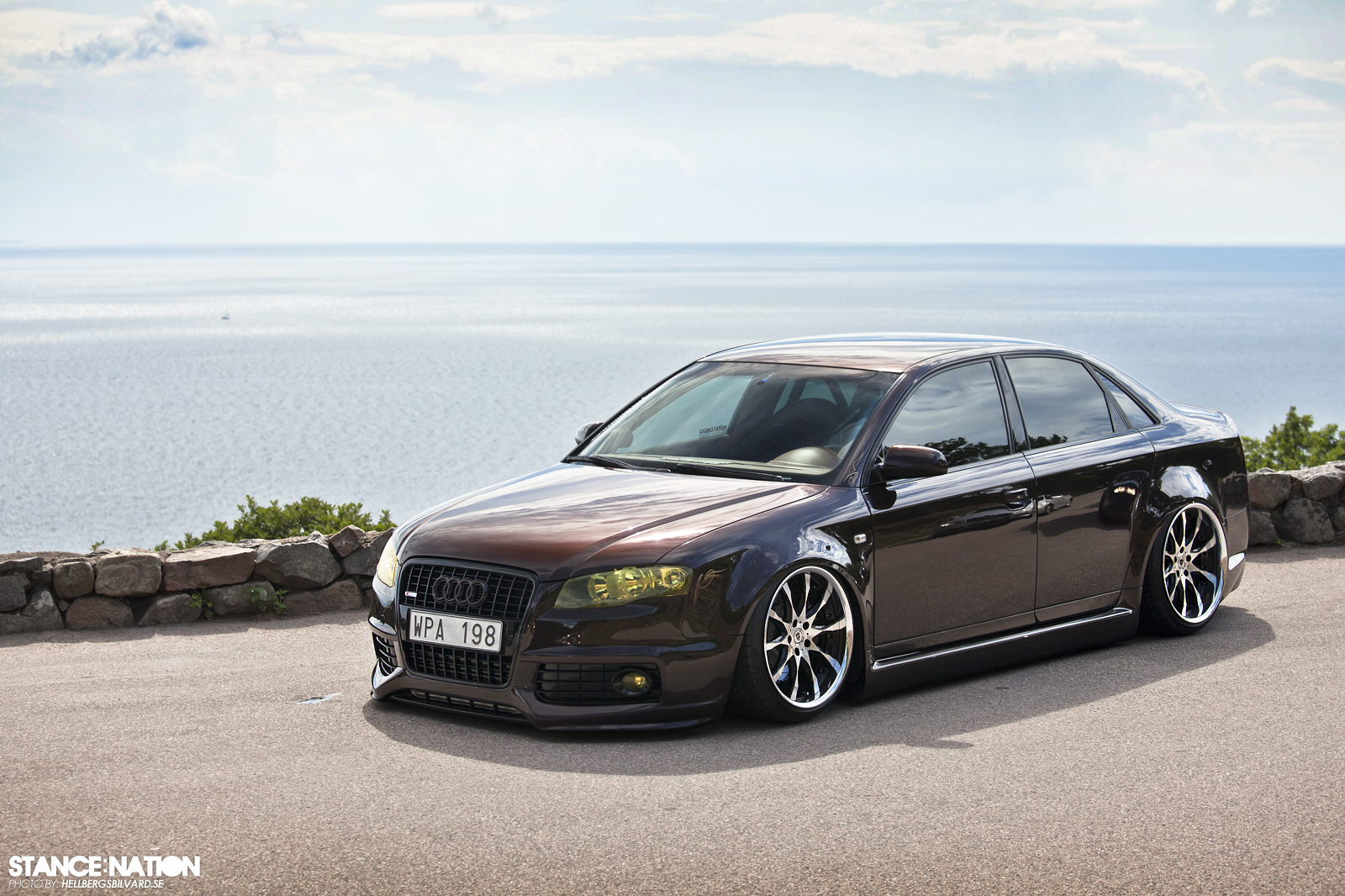