I’ve always been a fan of BMW E36s, or really any of the various generations of 3-series.  They commonly have the largest aftermarket support of the manufacturer’s offerings and for people like us, that’s a huge advantage.  In fact, I recently bought one of my own.  The E36 design is distinctly German in nature; its sharp lines are utilitarian but still very attractive.  The same understated design elements that make it so attractive, however, make it difficult to change without becoming tacky — which is why in most cases modified E36s end up just looking like the M-versions of the chassis (like mine…lol).  For some, this simply isn’t enough.  They must go further, though they still have taste so they focus on small details in order to fully convey their individuality.  Michael Rabe out of North Carolina is one of the dedicated few that find themselves on this detail-oriented quest, and that has contributed to the quality of this 325is build.  While the major body components are tasteful M pieces, it’s the tiny differences that stand out. 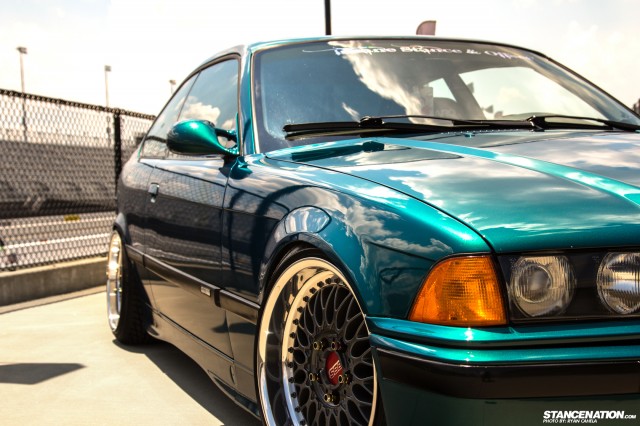 Upon trading his ’87 Jeep Cherokee for the car around 4 years ago, Michael began by overhauling all of the bushings with Powerflex replacements and a set of Ruff Racing wheels he picked up on the cheap.  However, he would soon part from these wheels and jump on an opportunity to obtain the BBS Style-5s (RC090s) that he now rolls on.  Rabe tell us the stance bug bit him hard and thus his car then began its ascent to the current state. 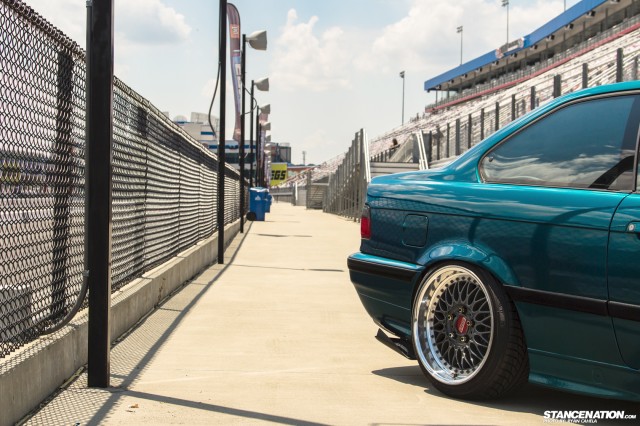 The BBS’ needed refinishing when he got them, but Michael decided to take it a step further from your average polish/repaint course of action. The faces were powdercoated Ferrari silver and the rear barrels were sent off to Weldcraft Wheels in Michigan where 2” were added created the first (and only that I’ve heard of) 17×10” BBS Style-5s. Red BBS center caps were integrated into the hub bore of the wheels and the end product is very clean and complete looking. 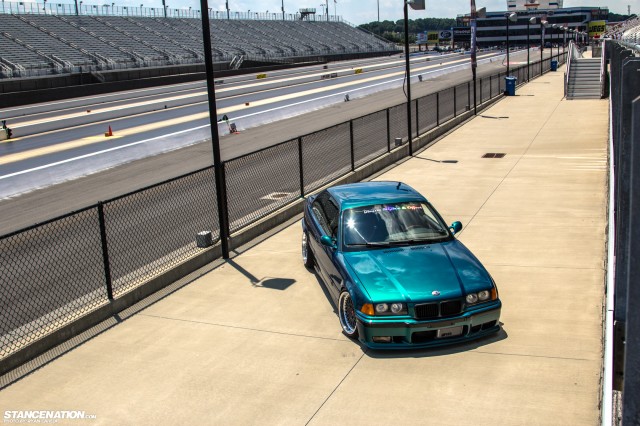 This isn’t a simple “lowered on wheels” build.  The M50B25 was treated to handful of upgrades including S52 camshafts (from a late model USDM E36 M3).

BC Racing coilovers coupled with Racing Dynamics swaybars maintain the handling characteristics of the E36, an aspect of the vehicle that contributes heavily to its popularity, while providing the uber-crushed stance.  Michael tells us he was very careful throughout the build to keep the fenders unmolested, even going as far as to cut the rim-guards off a previous set of Nitto Neogen tires.  It’s this kind of attention to detail that really shows in the overall quality of the car. 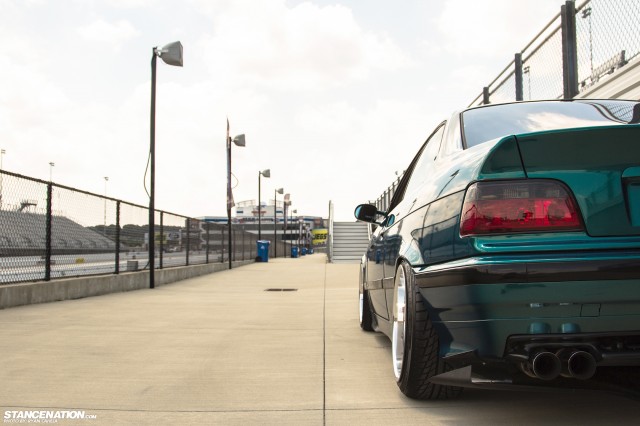 One of the most unusual additions on Michael’s car is the carbon diffuser, originally intended for a Mazda FD3S.  This is probably the most talked-about piece on the car, and has prompted my personal friends to advise me how much I need a diffuser.  It’s definitely a unique modification and is one of Rabe’s favorite components on his vehicle.

The interior was treated to a plethora of quality modifications.  The seating is by Recaro, steering by Nardi, and shift effort executed via a custom 5” solid brass shift knob that Rabe fabricated himself.  He speaks very highly of the shifting feel that has resulted from the baller knob. 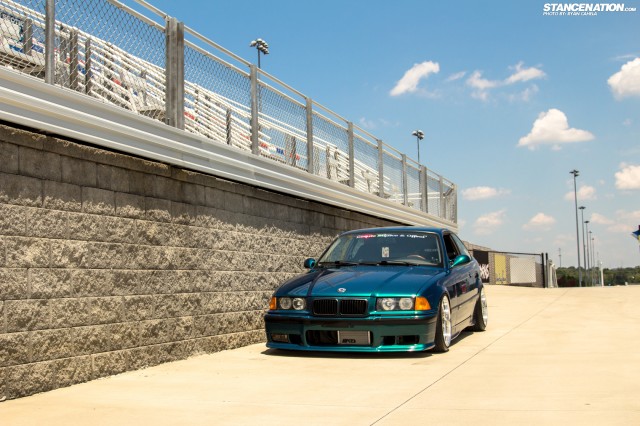 The CES Motorsports oil cooler continues the  ‘race-inspired’ look of the rear diffuser to the front of the car. 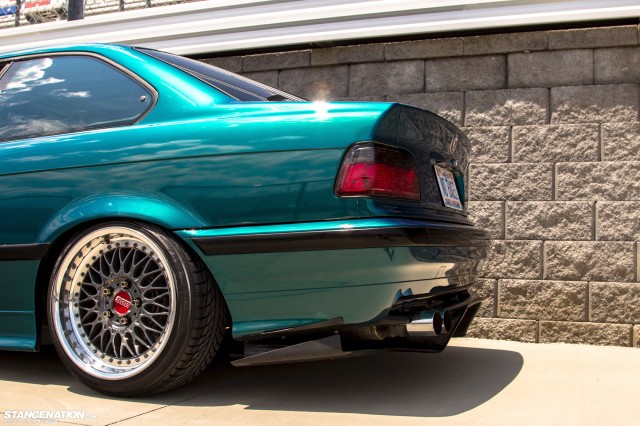 Unlike many of the vehicles I have the pleasure of writing about for Stance:Nation, this one is local and I’ve seen it in person at several events.   You see, Michael represents Insane Stance & Offset, which is a crew and event organization entity out of North Carolina.  They are huge contributors to the Southeast scene; always bringing a large presence of quality builds (and models, of course) to various shows and meets.  Most recently, I ran into his E36 at Import Alliance in Concord, the immaculate Mystic Laguna green/blue pearl paint was gleaming in the bright North Carolina sunlight and it simply looked fantastic.  I’m especially fond of the Alpina roundels in place of the factory-issue BMW ones. 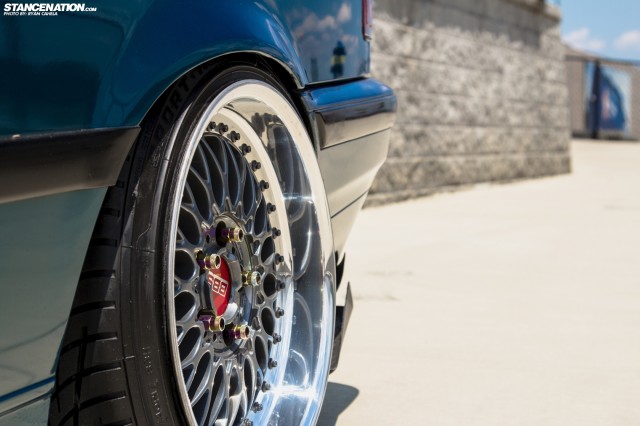 Just like in cooking, it’s the subtleties that truly separate the good, from the better, from the best.  Be it a dash of salt or 2” extra width in a wheel – these seemingly minor qualities will ultimately “make” the build.  Guys like Michael Rabe have committed wholeheartedly to the details and it’s the enthusiasts like him that end up bringing the “cool” cars to events.   Your average on-looker may not notice, but those in the know will take note and appreciate the extra effort.  If you’re ever in the Southeast and notice the Insane Stance & Offset crew is there, you can be sure to find Michael’s BMW with them.  Look closely and pay attention – you might just miss something inspiring. 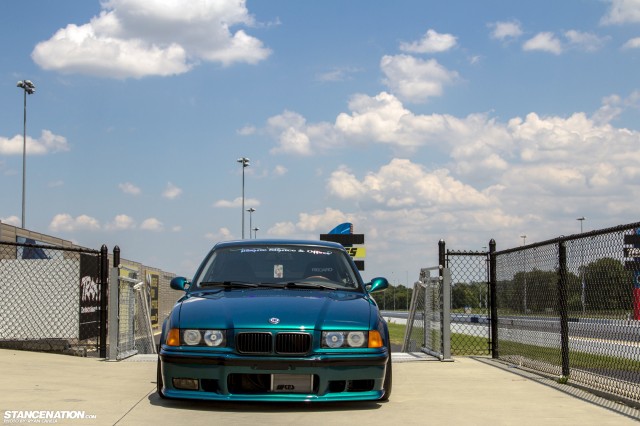 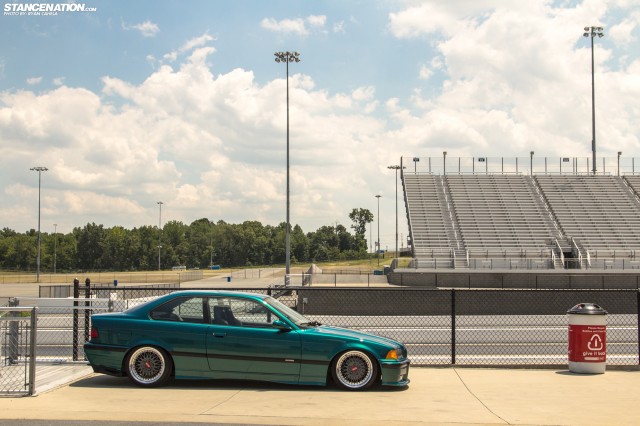