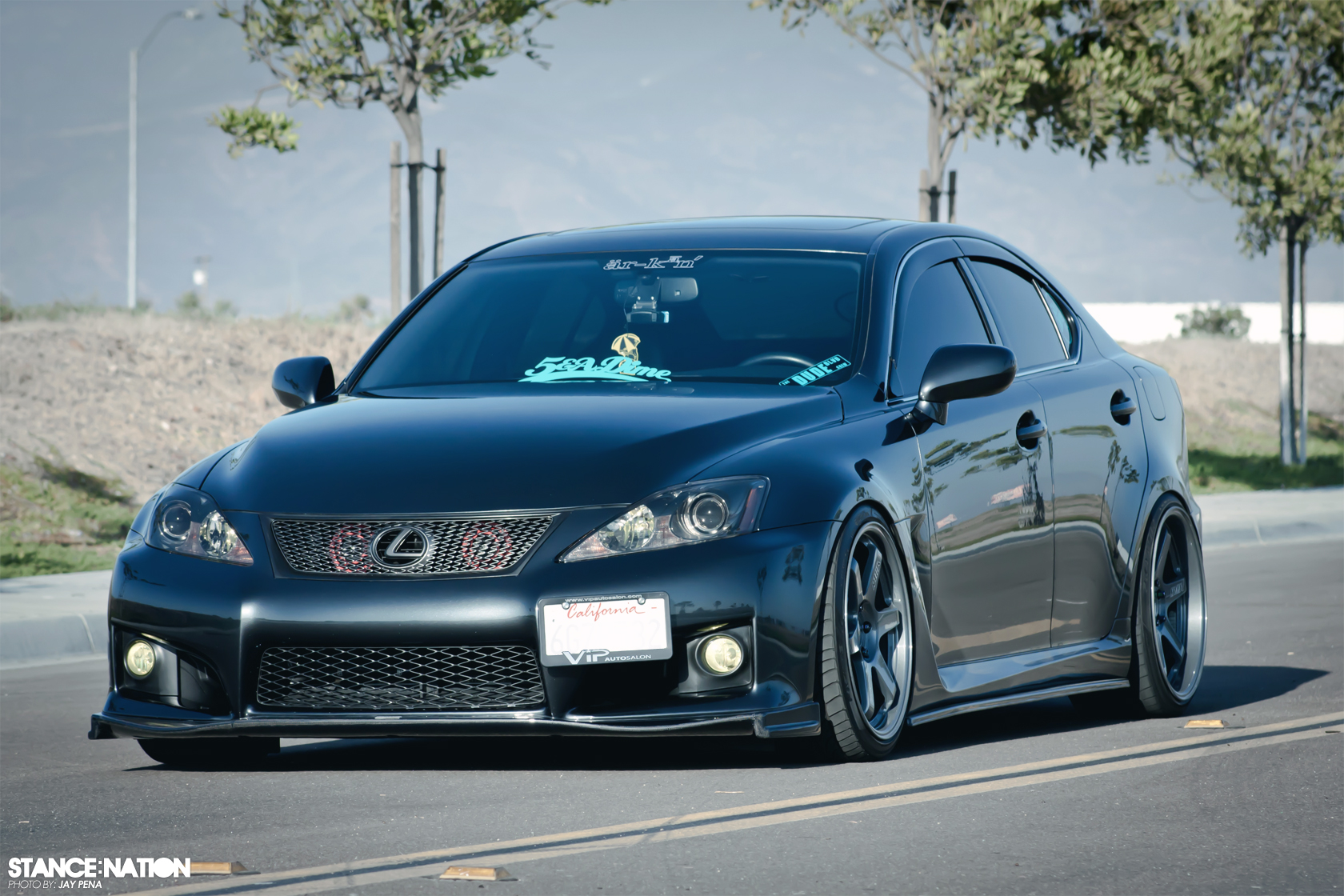 With the “wheel fitment” scene constantly growing, it is easy to get carried away and end up with a set of wheels that were clearly not meant to ever be on your car. Whether it’s their width/offset (yes, there is such a thing!), design or even their finish. Running the craziest offsets or the most expensive set of wheels doesn’t “magically” make your car “proper” if we may, it’s the overall look that matters, to us at least. If you agree with us, you will love the car we have for you tonight. This beautiful Lexus IS-F belongs to a good friend of ours out of San Diego whose name is Cris Mcallister. It’s a perfect, and we mean perfect example of how you too can have a proper sitting car without going overboard. 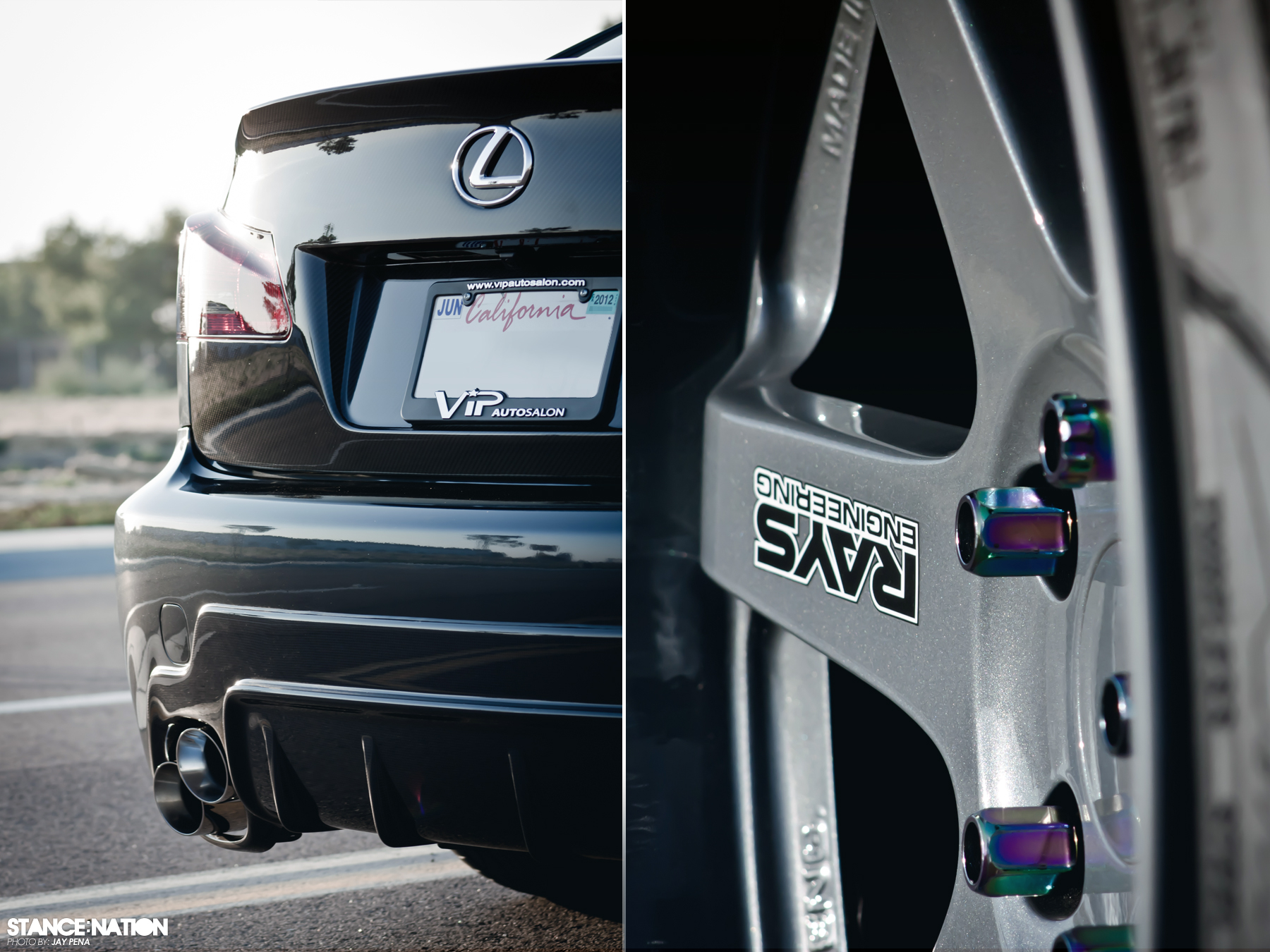 It features a few quality carbon fiber parts such as Tom’s CF body kit and the Ventroos CF trunk made by Vorsteiner. Cris also de-badged the entire car and took off the “shark fin” diffuser that can be found above the roof spoiler on stock IS-F’s. We still can’t get over the fact that this is an IS-F and not just a standard 250 or 350. What we love the most about the car though is the way it sits of course, so why don’t we get into that some more? Check out the custom finished wheels that this thing is rocking! 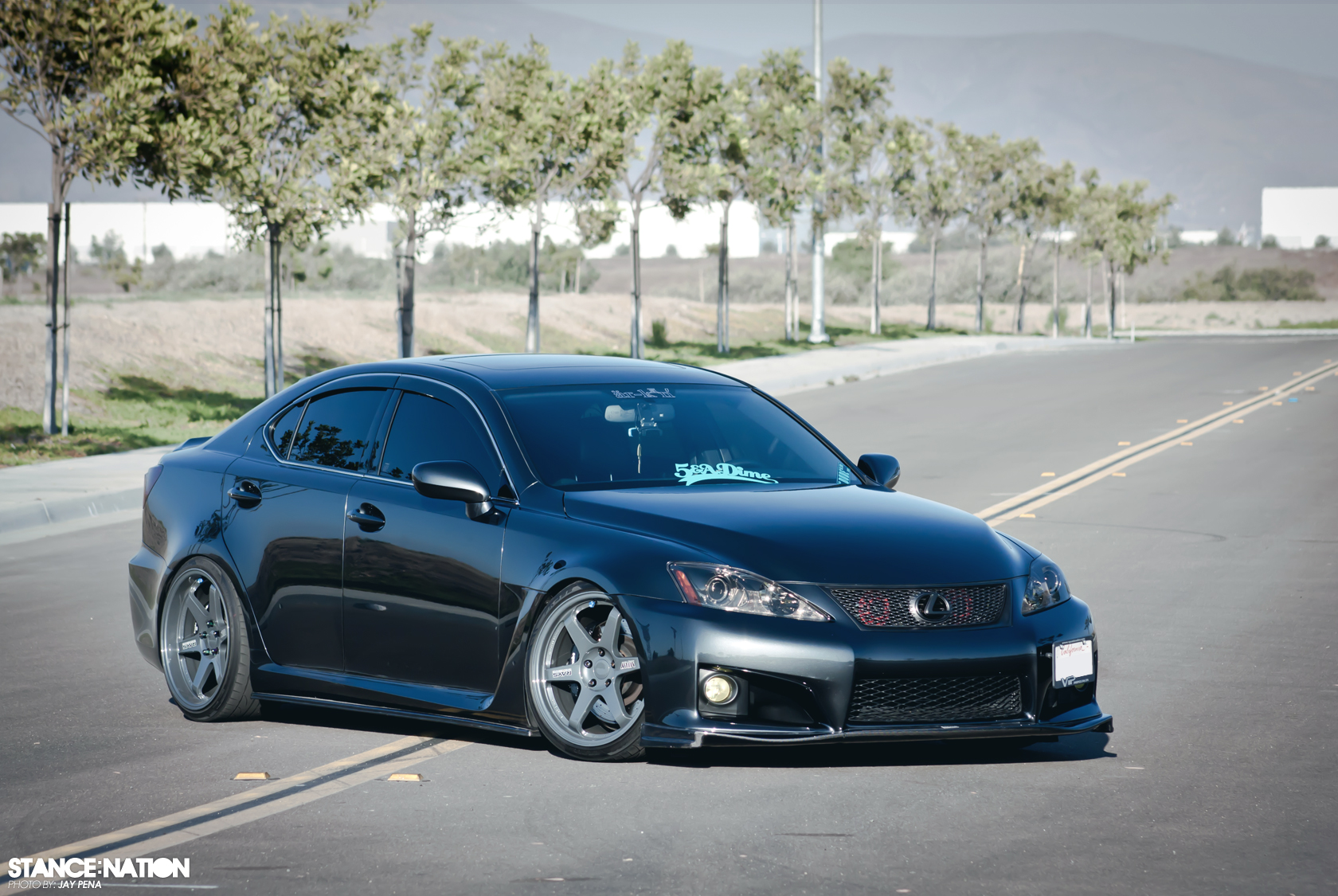 Here comes the good part. Cris dropped the car on KW V3 coilovers, he installed the Toms strut bars and undercarriage bars, and he then mounted a set of custom finished (Battleship Gray) set of Volk TE37’s. They are 19×9.5 (+25) upfront and 19×10.5 (+35) in the rear wrapped in 265/30/19 and 235/35/19 Falken tires. He finished the wheels off with some Project Kics neo chrome lug nuts and put on Project mu street pads! Hit the Read More button for more specs and dope photos. 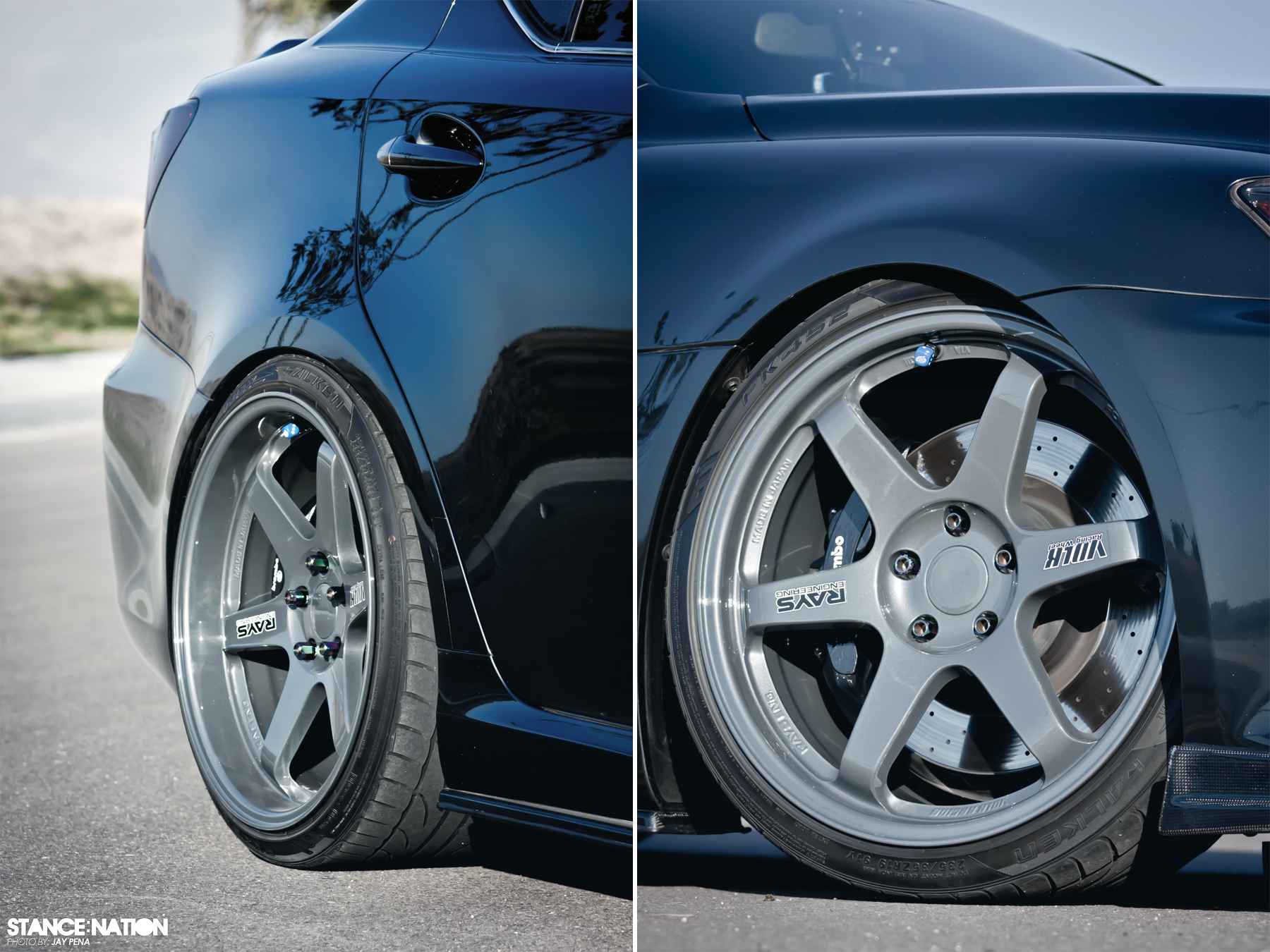 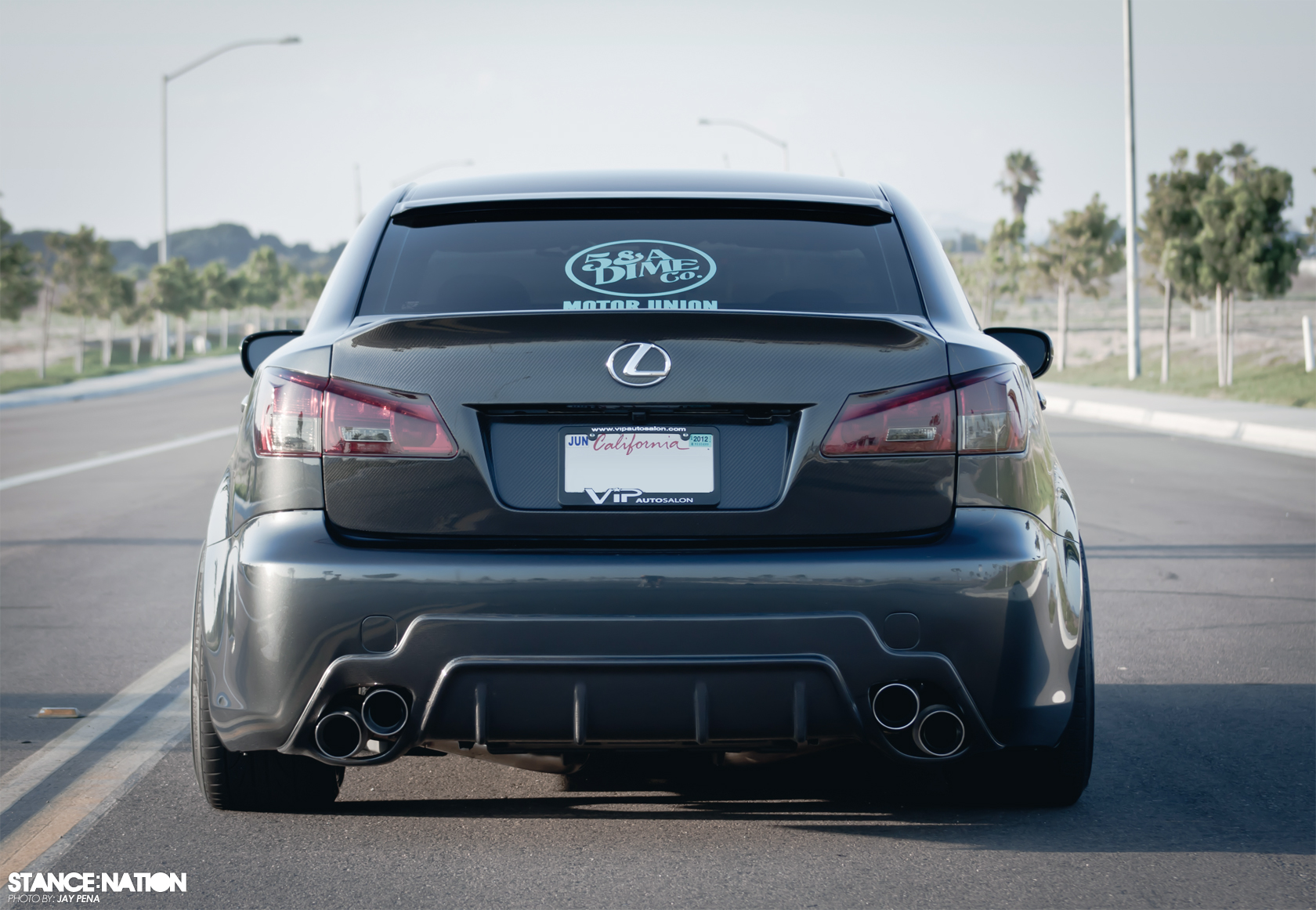 In case you are wondering, the car does get tracked quite often. While you won’d find anything wild under the hood, Cris just had to add a few things here and there. Things like Tom’s throttle controler, some Sikky headers, ISS Forged track exhaust, Tom’s hybrid filter, Joe z intake and small things such as Tom’s GT shifter that many in the IS-F community say nothing but good things about. 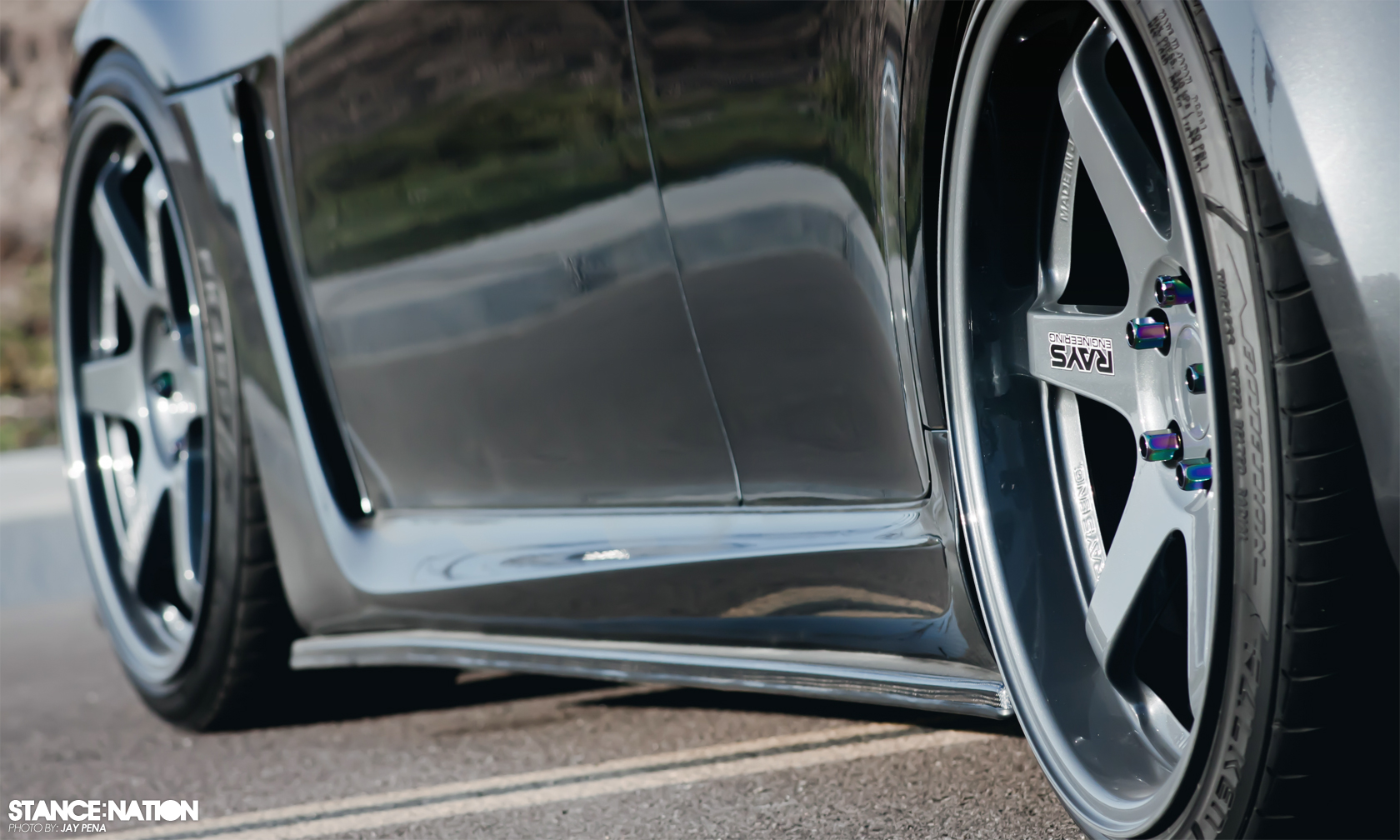 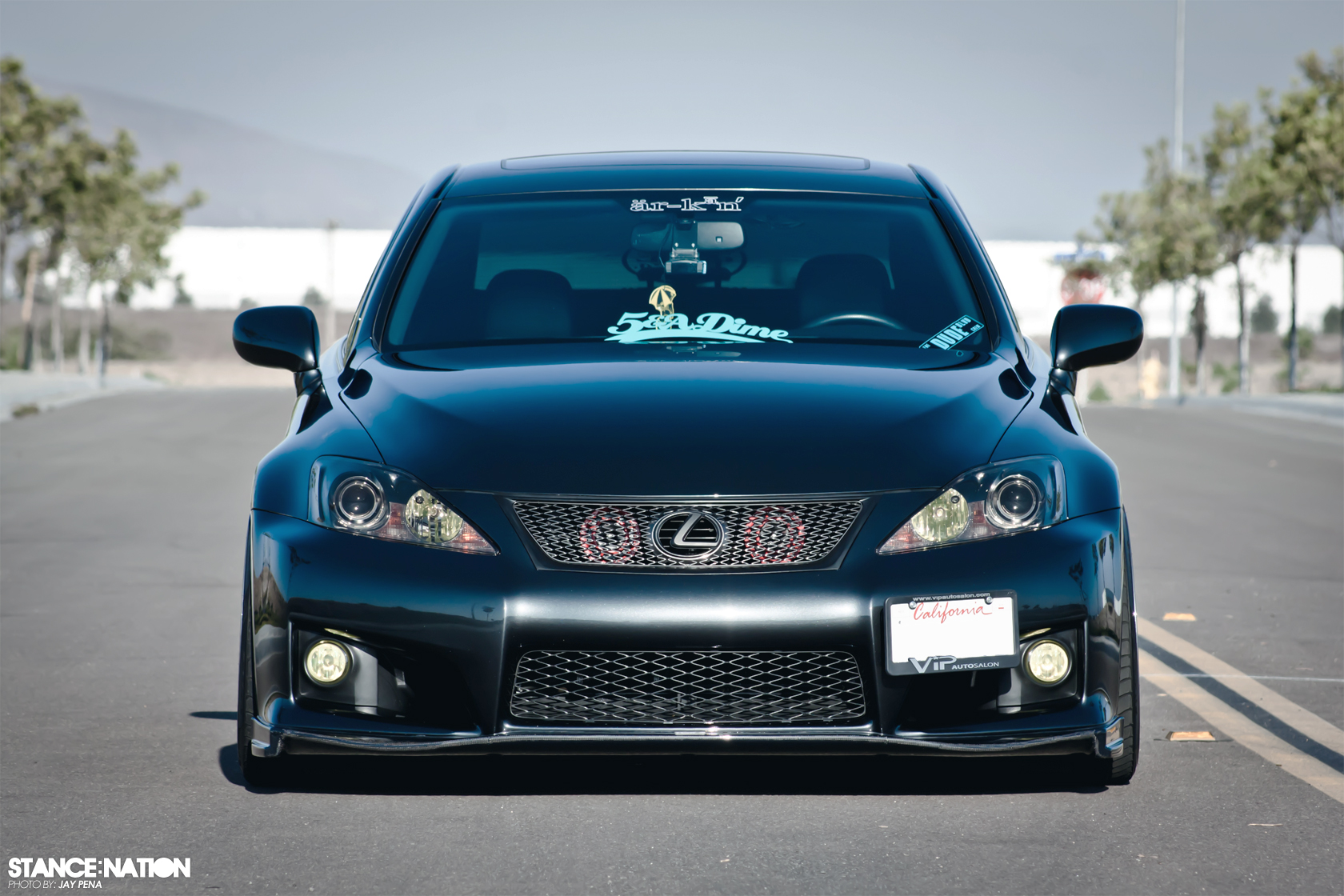 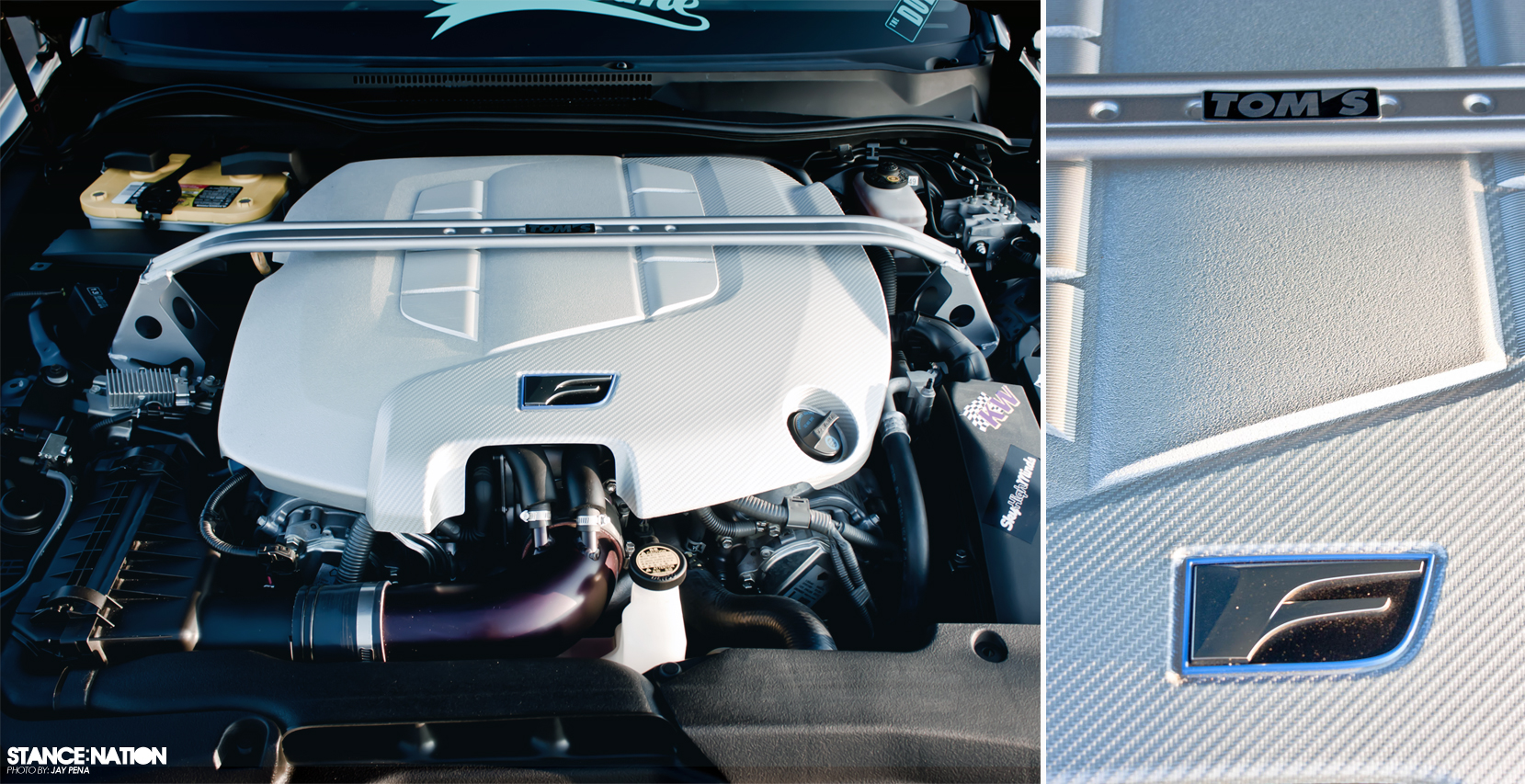 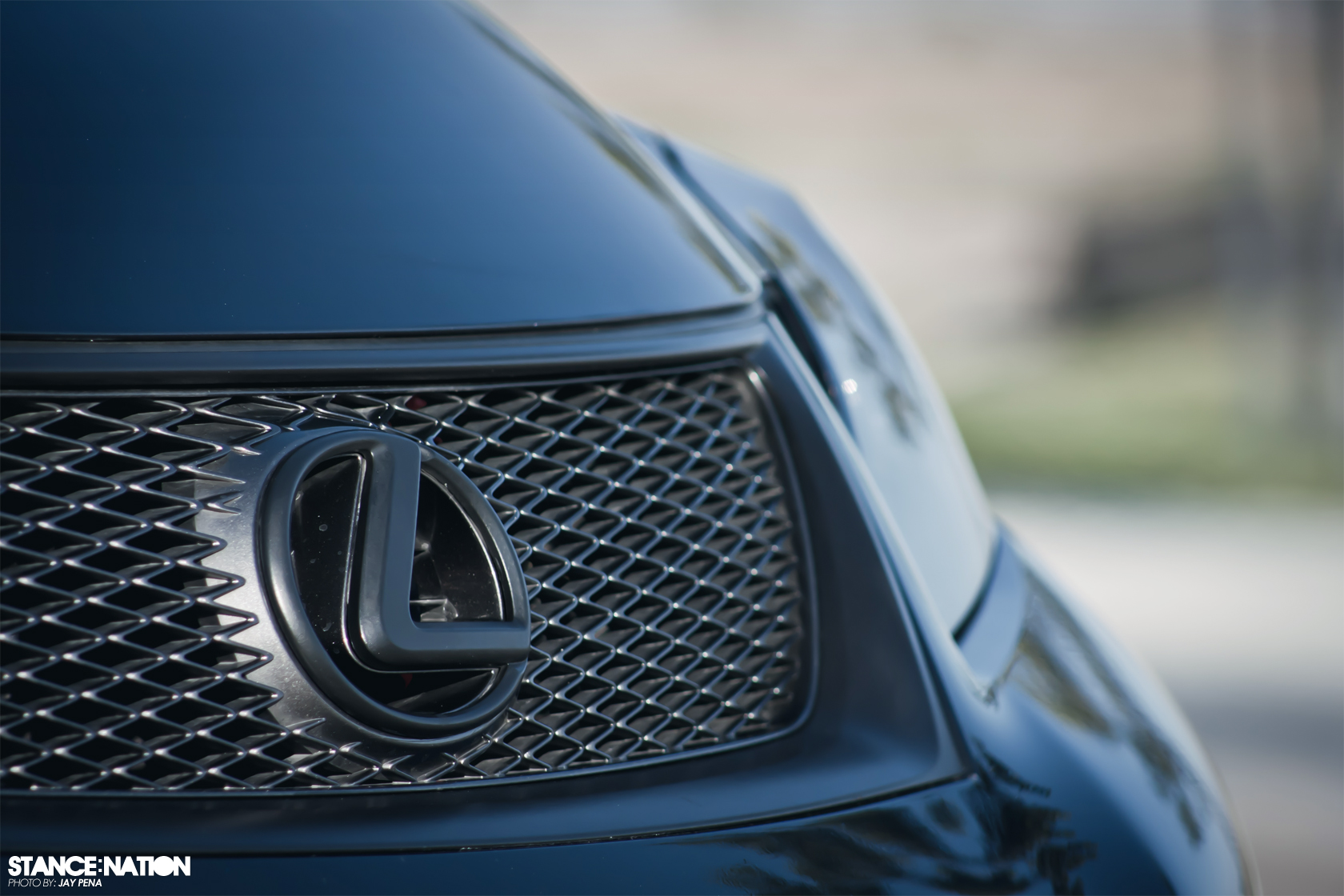 We’ll wrap things up with a few photos that our photographer Jay Pena snapped a couple days prior to the ones you see above. Huge thanks to him as well as Cris for agreeing to this feature. Cris wanted to give a shout out to Jay Pena, his family, his girlfriend Eileen, Team Arkan, DUDE BLVD Crew, 5&ADime, all of his friends that helped him with the build. Cris tells us to expect a full cage, new seats and a supercharger in the very near future! Email us your rides to snfeatures@gmail.com if you think your ride has the “fitment & looks” it takes to end up on our site. 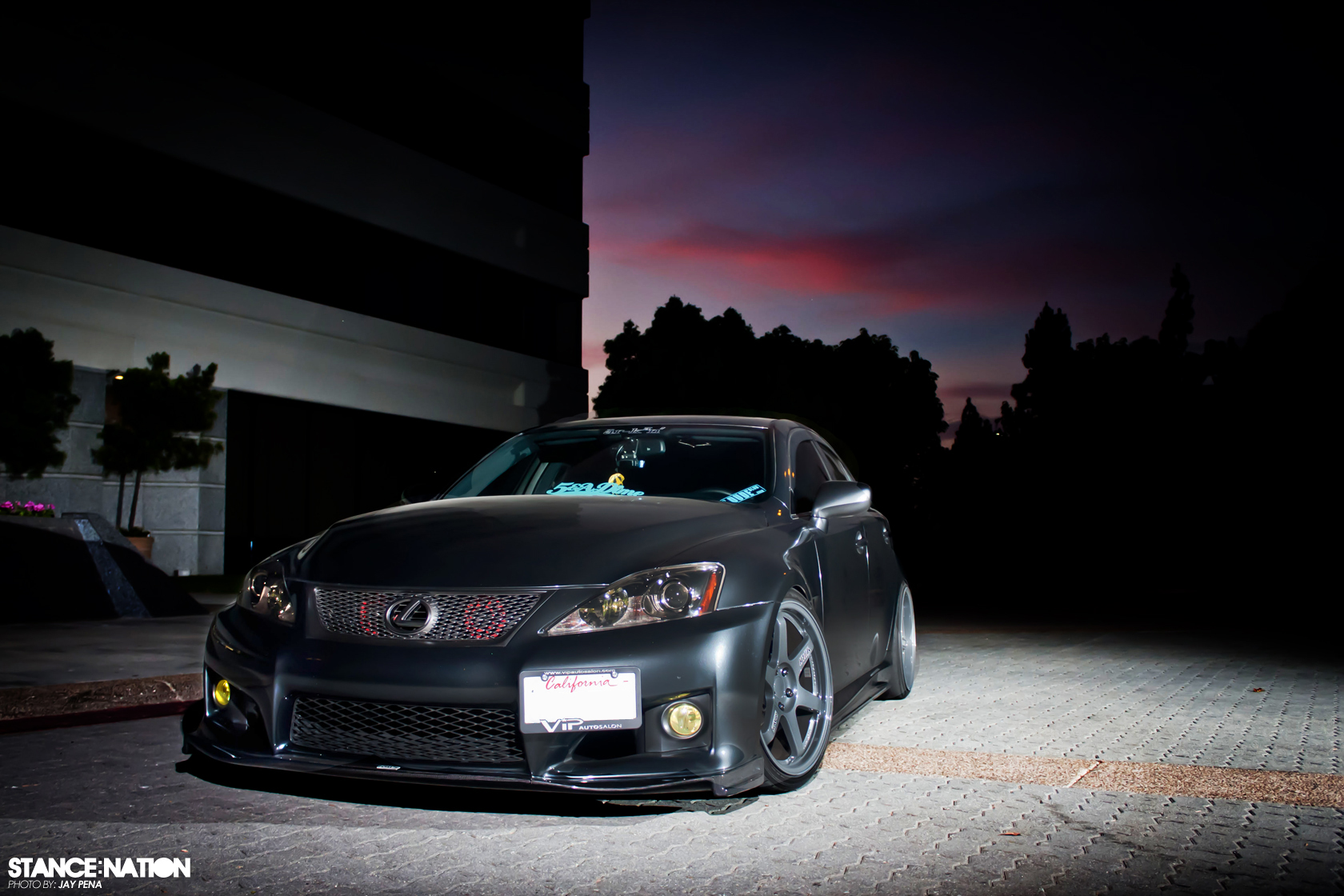 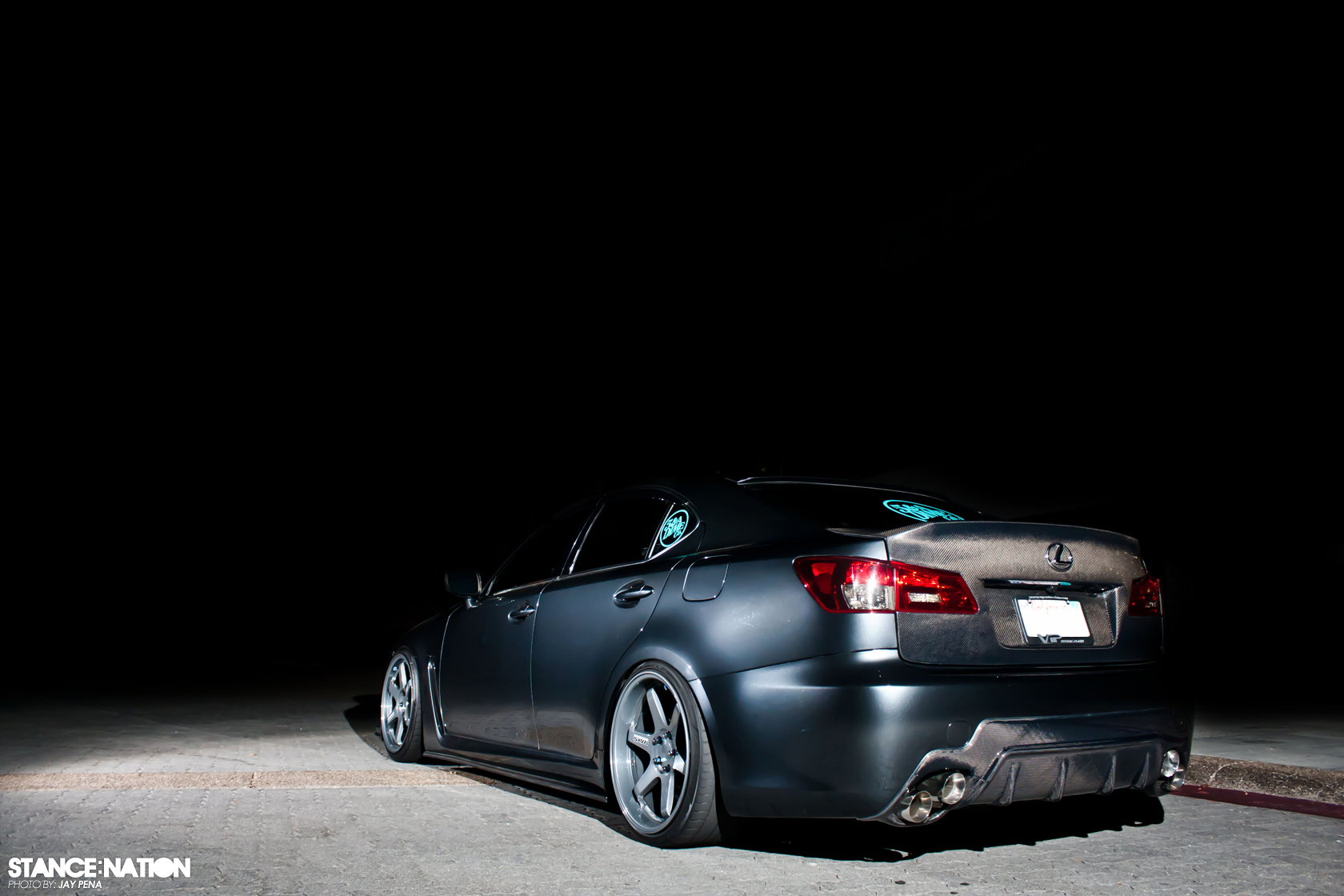 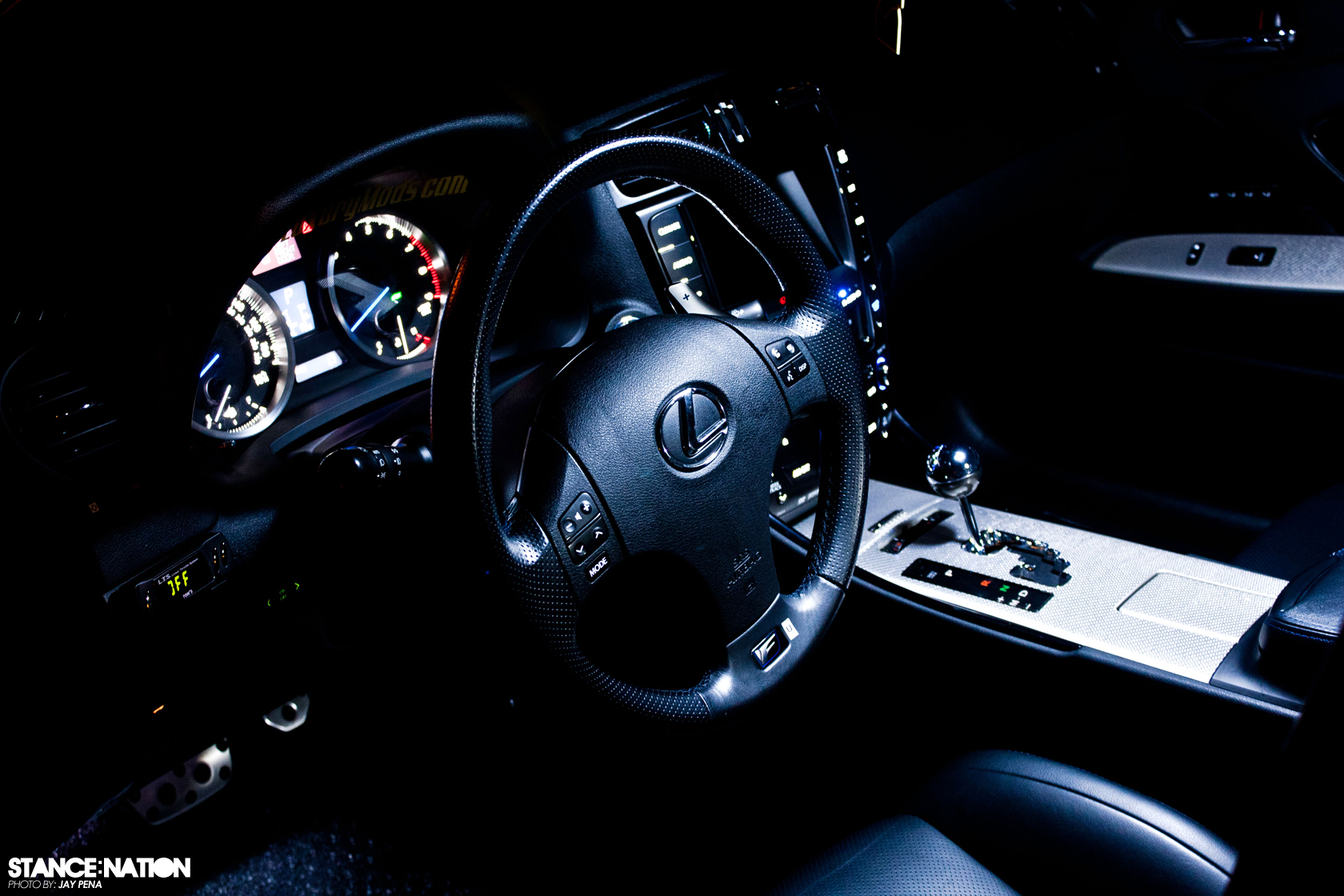 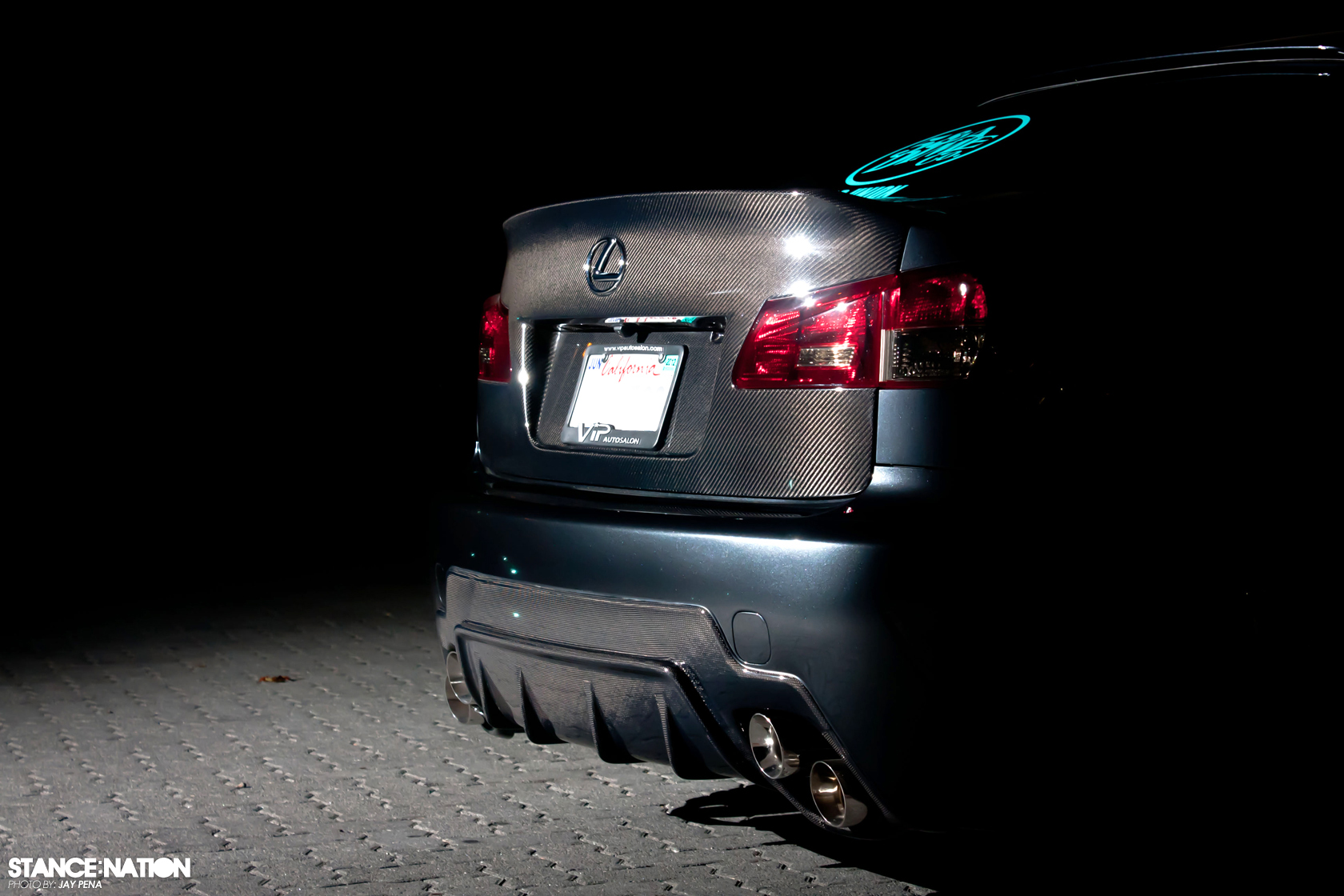 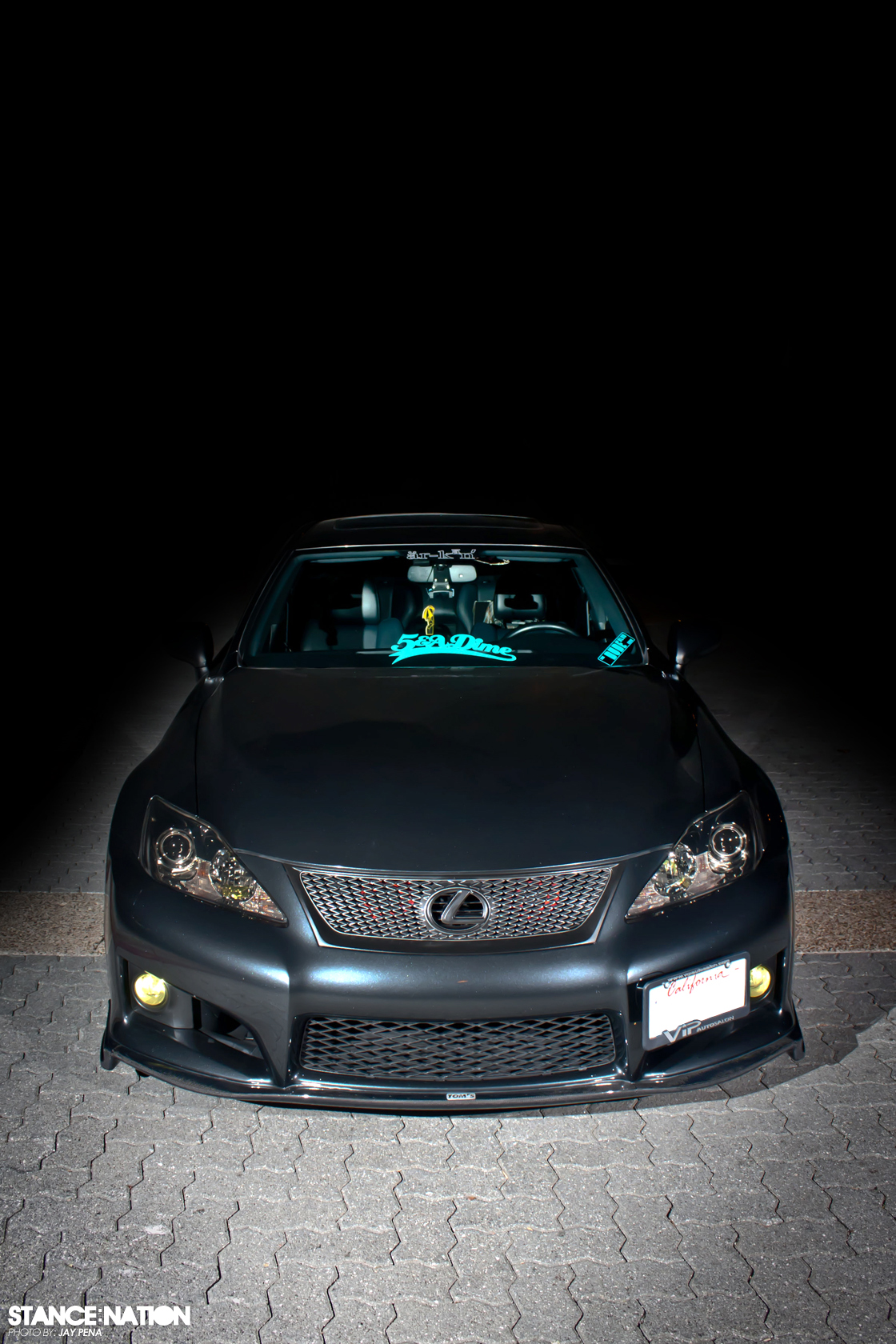 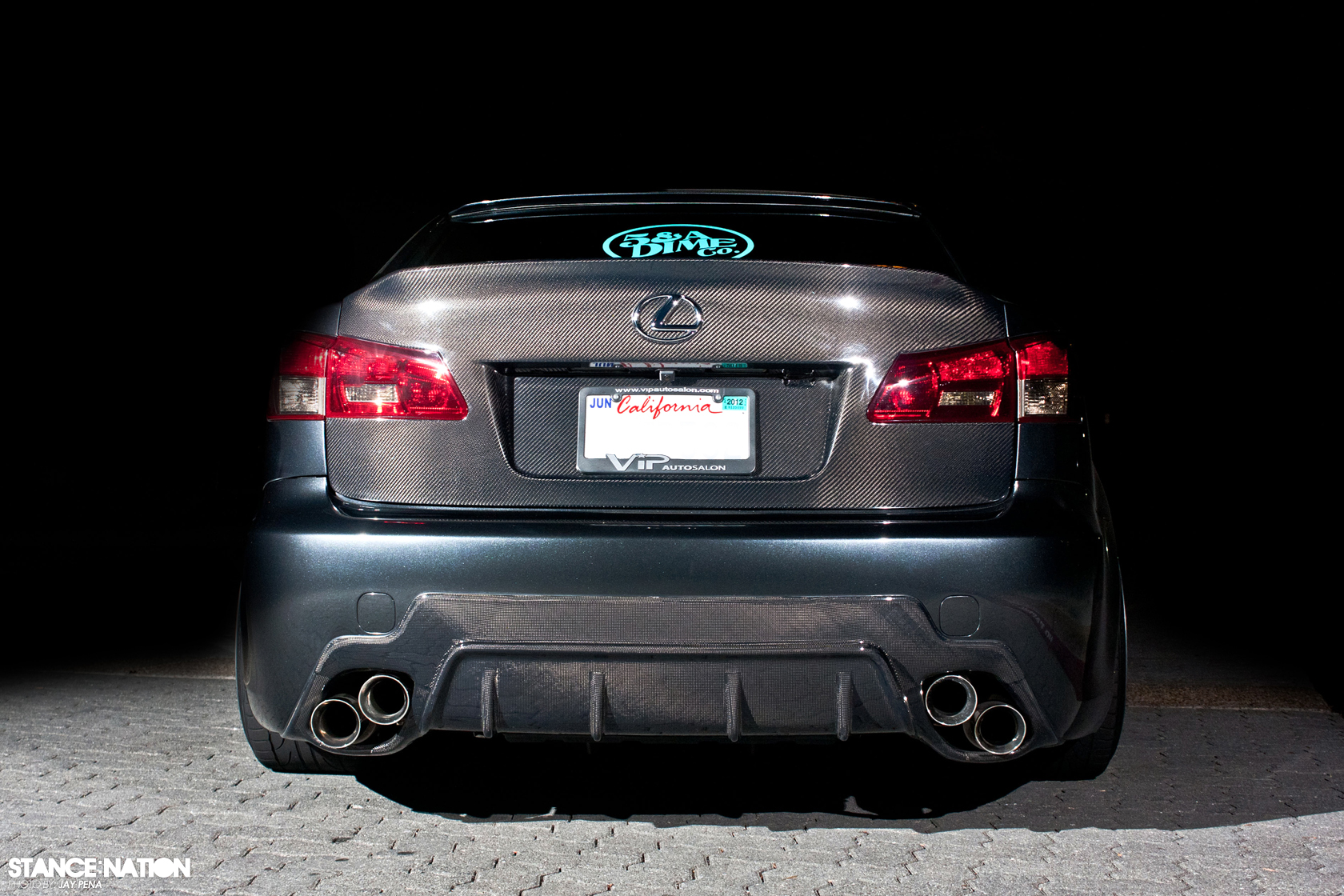