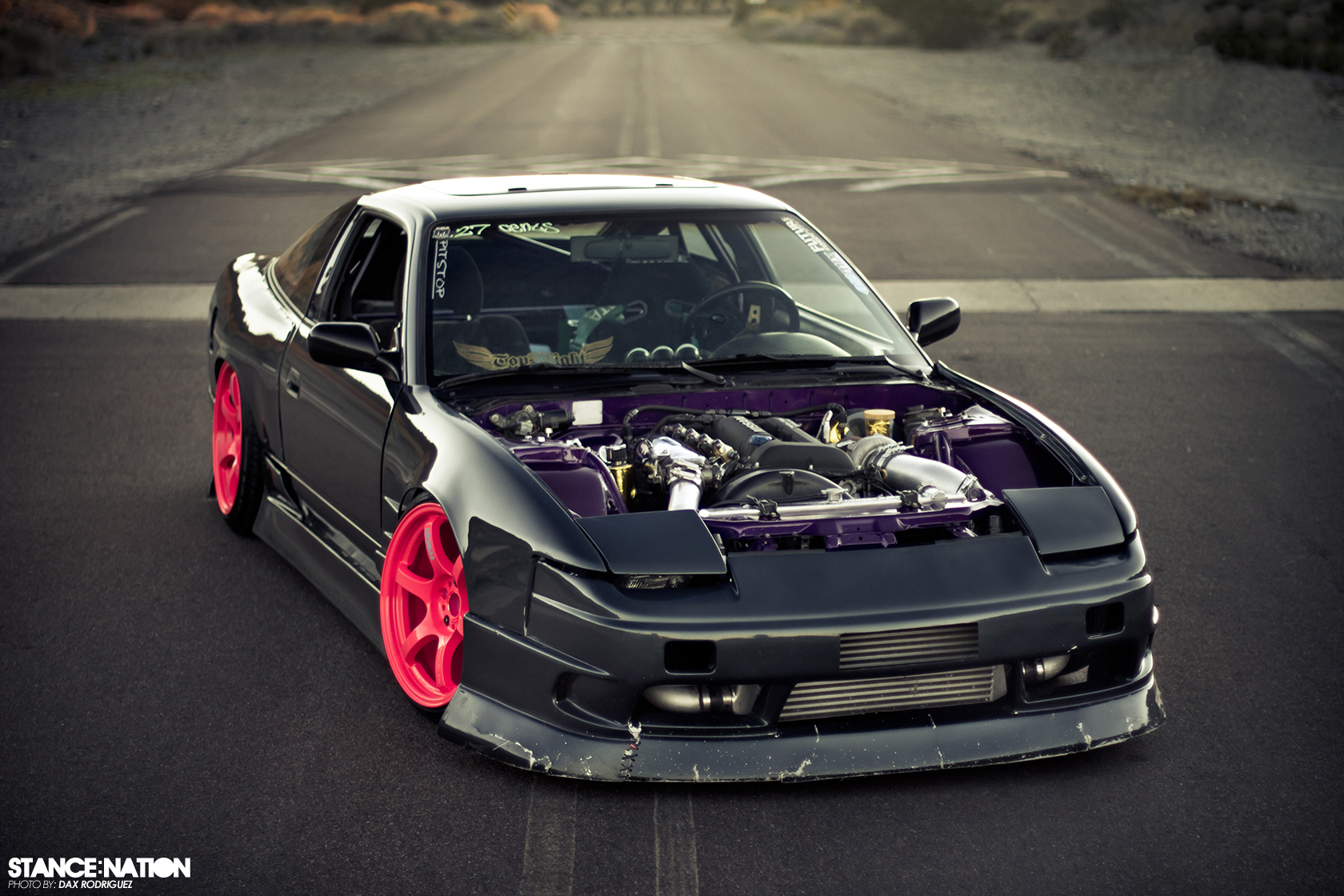 There is “clean” and there is “rough”. Pretty obvious what Jared’s 240SX would be listed under. Yup, rough & raw all the way! It seems like it’s the complete opposite of our last feature. It all started about two and a half years ago when Jared picked up a shell of this ’89 240SX. During the build he ran into many obstacles. Fact that it was an ’89, he had to be careful when dissembling everything. One of the first issues he ran upon was when his friend Raymond accidentally snapped the bolt holding the rear subframe. The only way to fix that was to remove the broken bolt and weld on an equivalent sized, but they got it done. And so the issues began, but before we get into that let’s take a look at some photos that our Arizona based photographer Dax Rodriguez captured! 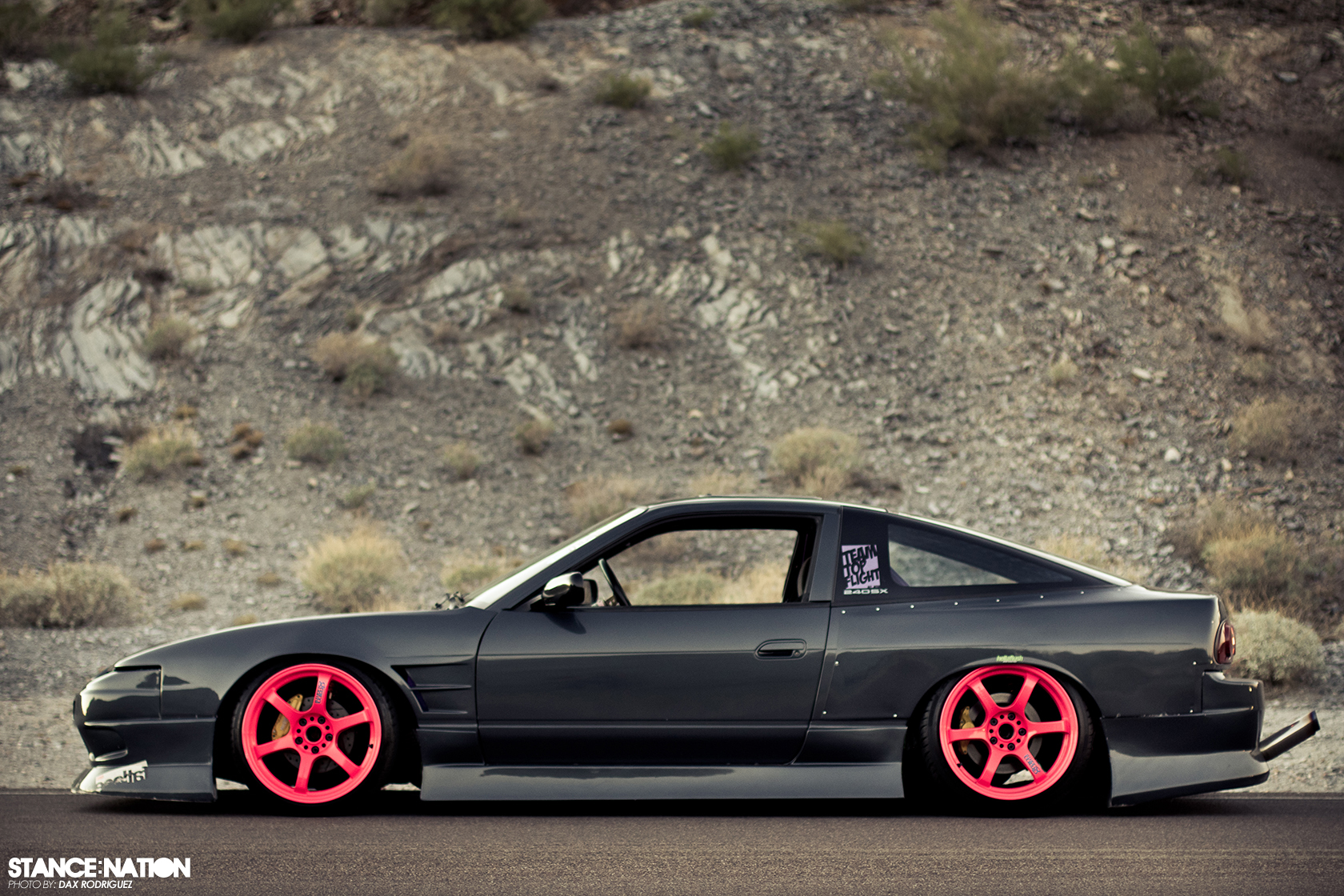 We are loving the color combo on this thing especially down in the bay. It all started at a local drift event when the wiring harness decided it didnt want to live anymore and caught fire inside the wheel well which eventually led to a complete wire tuck. The hardest part of the tuck was that having pop-up headlights and insisting on keeping AC as this is Jared’s daily driver out in Arizona. With the help of his friend Vitaly the wire tuck happened and soon after Jared decided to do a complete tear down and rebuild of the engine bay. He went with a candy purple color for the bay and a thought of adding in some bars and gussets would add some style. While the motor was out he figured he could use a little more power so he decided it was time to go top mount! While he was at it he also got rid of the mid-mount intercooler due to heat soaking instead he went with the stock SR fan shroud with a RB25 clutch fan. 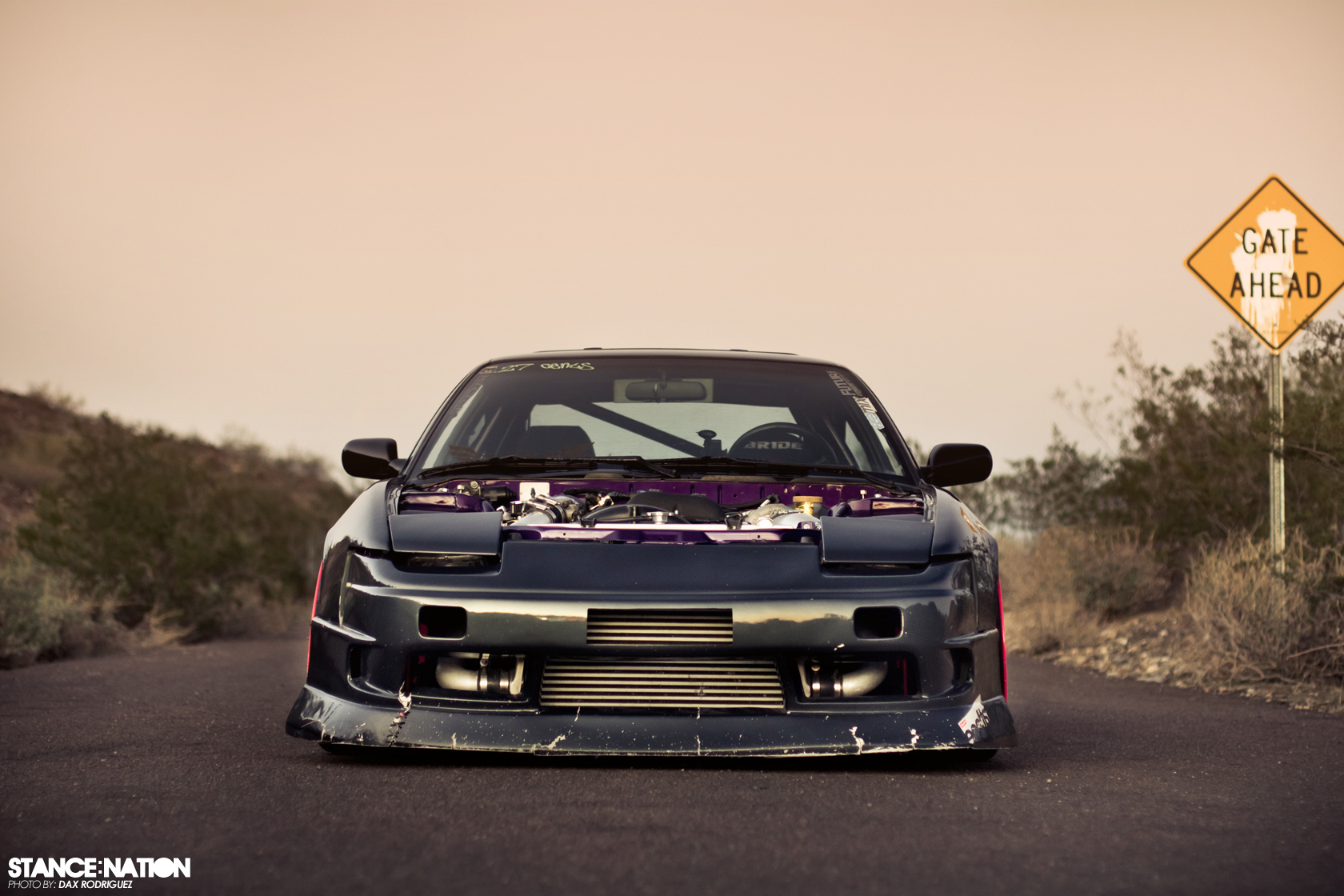 Since most of you are here for “stance & fitment” why don’t we take a closer look at that. While Jared is waiting on his new set of wheels to arrive from Japan, he is currently rocking a set of Gram Lights 57D in hot pink! They are 18×9.5 with 12 offset all around with 20mm spacers up front and 25mm spacers in the rear. for the suspension, Jared turned to PBM pro coilovers & PBM solid subframe risers along with CZP suspension arms and a fully seam welded chassis. He finally finished everything with Z32 brake calipers (front & rear) along with Z32 rotors & SG break/clutch lines. You can enjoy more awesome photos by clicking the Read More button under the photo below. 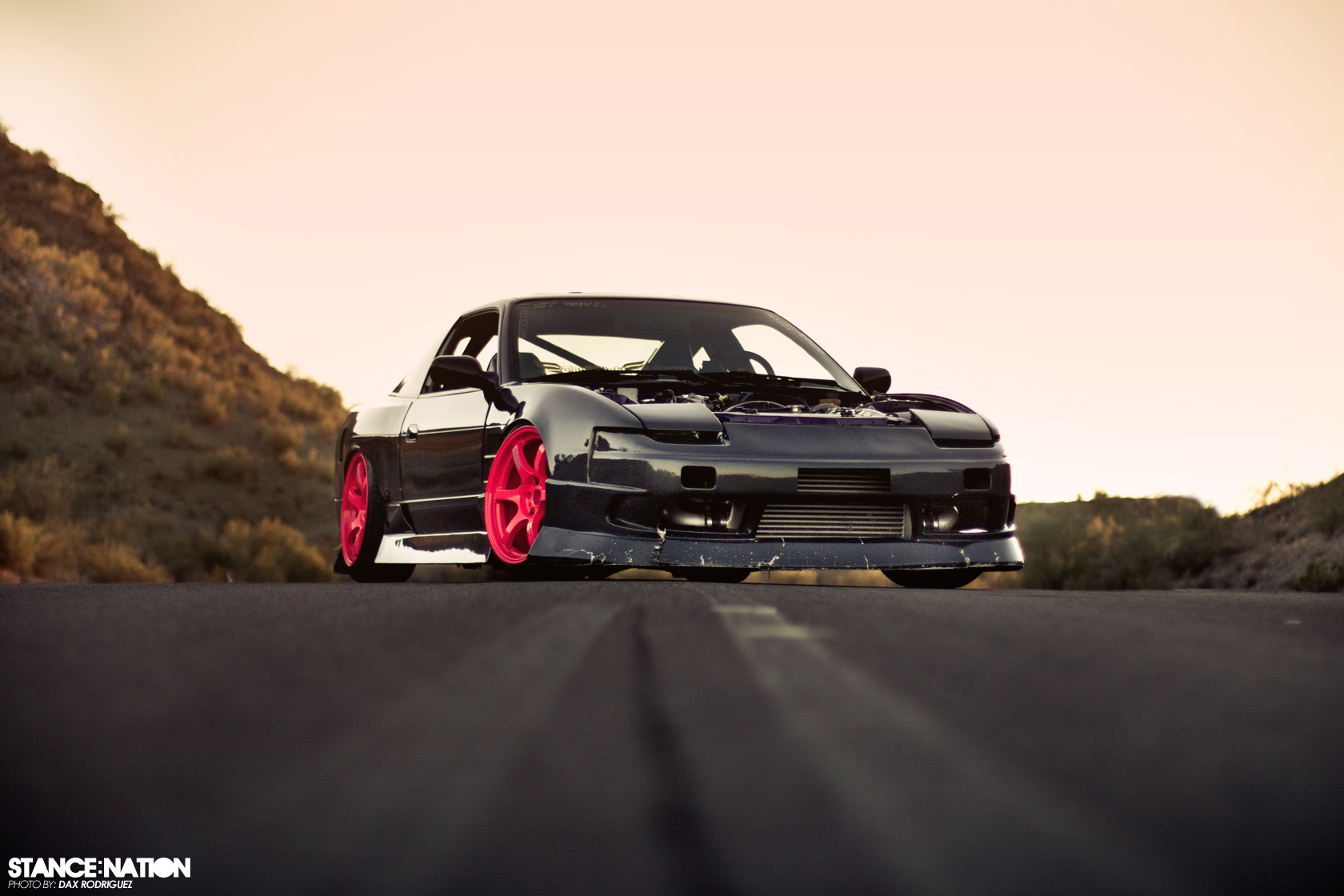 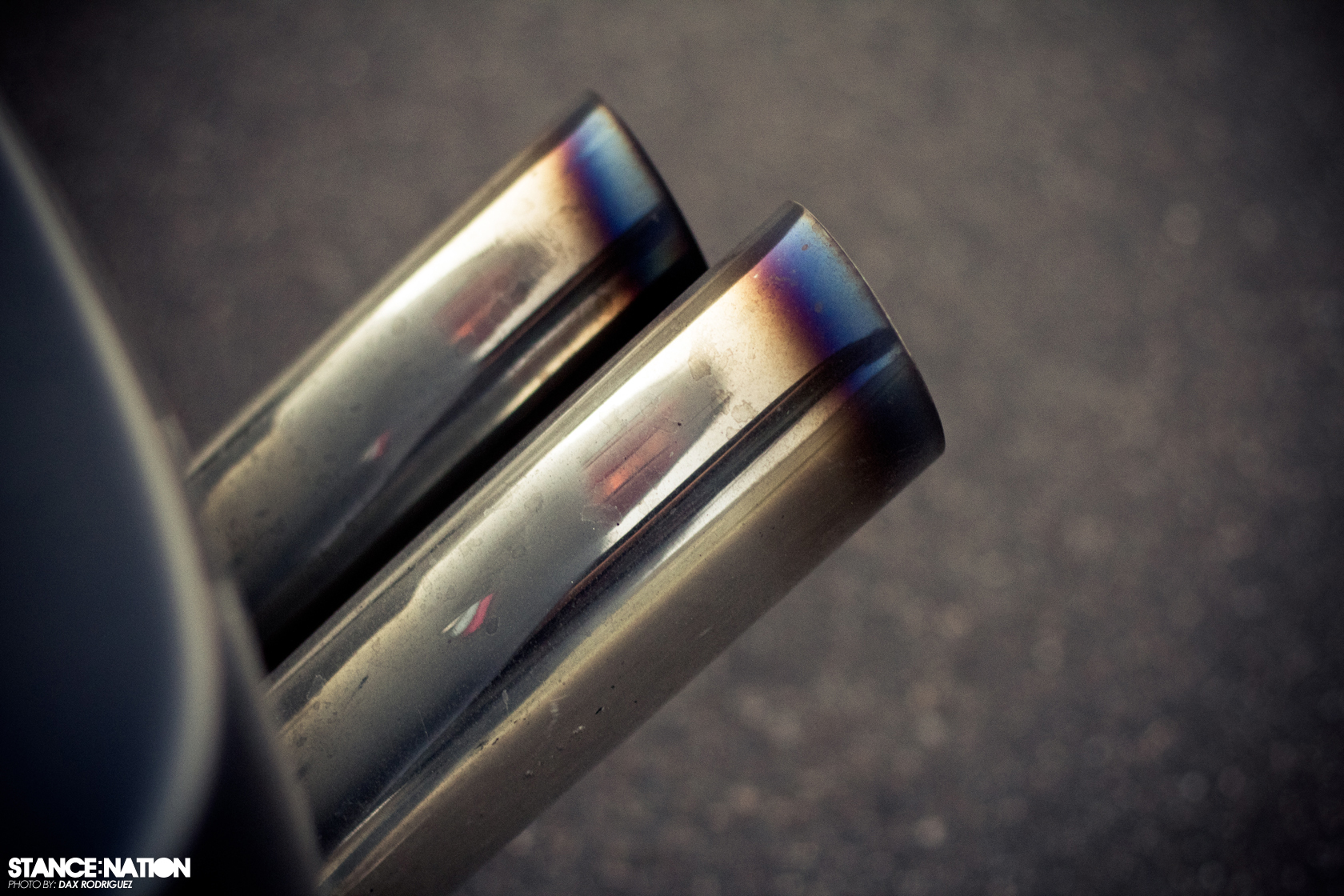 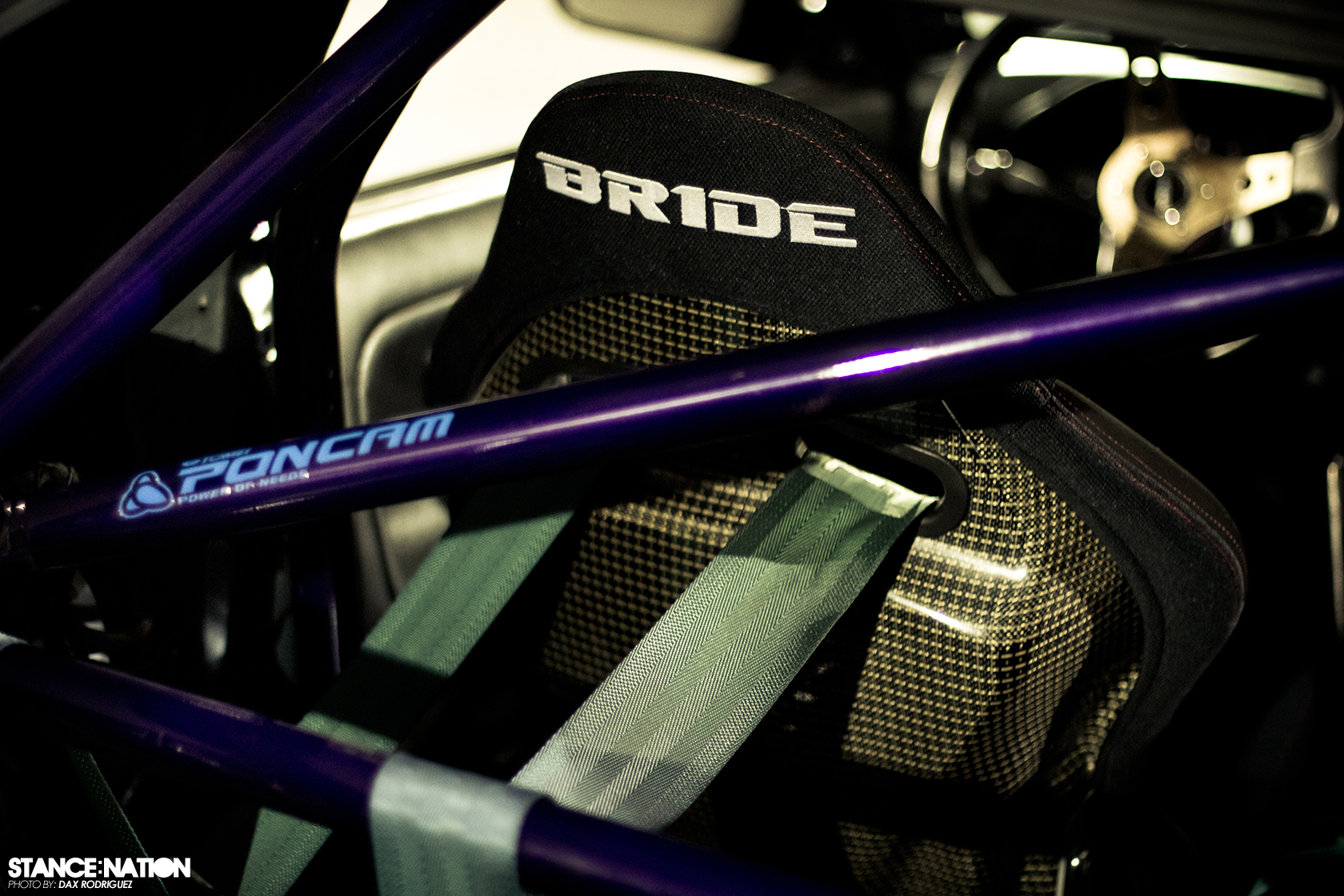 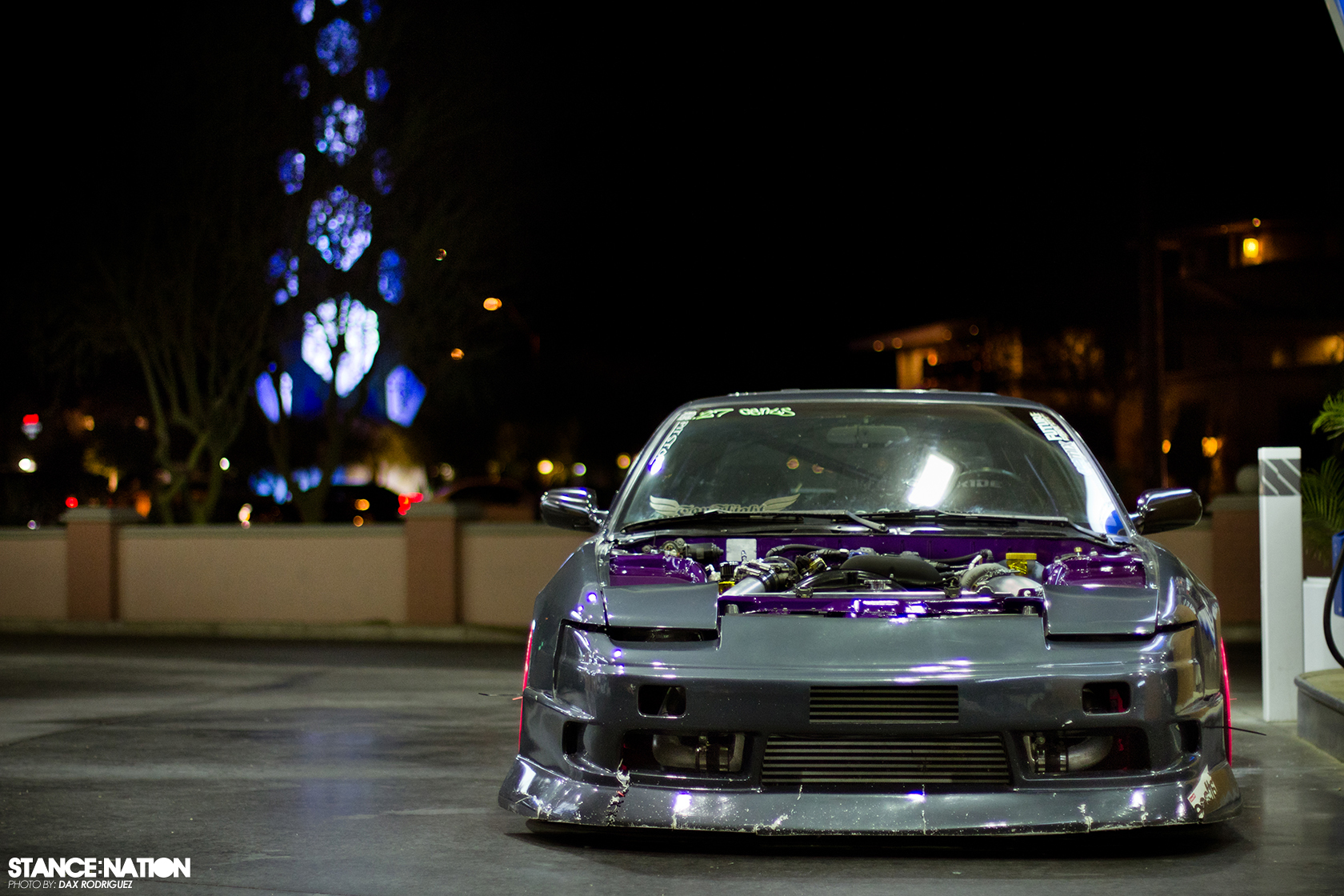 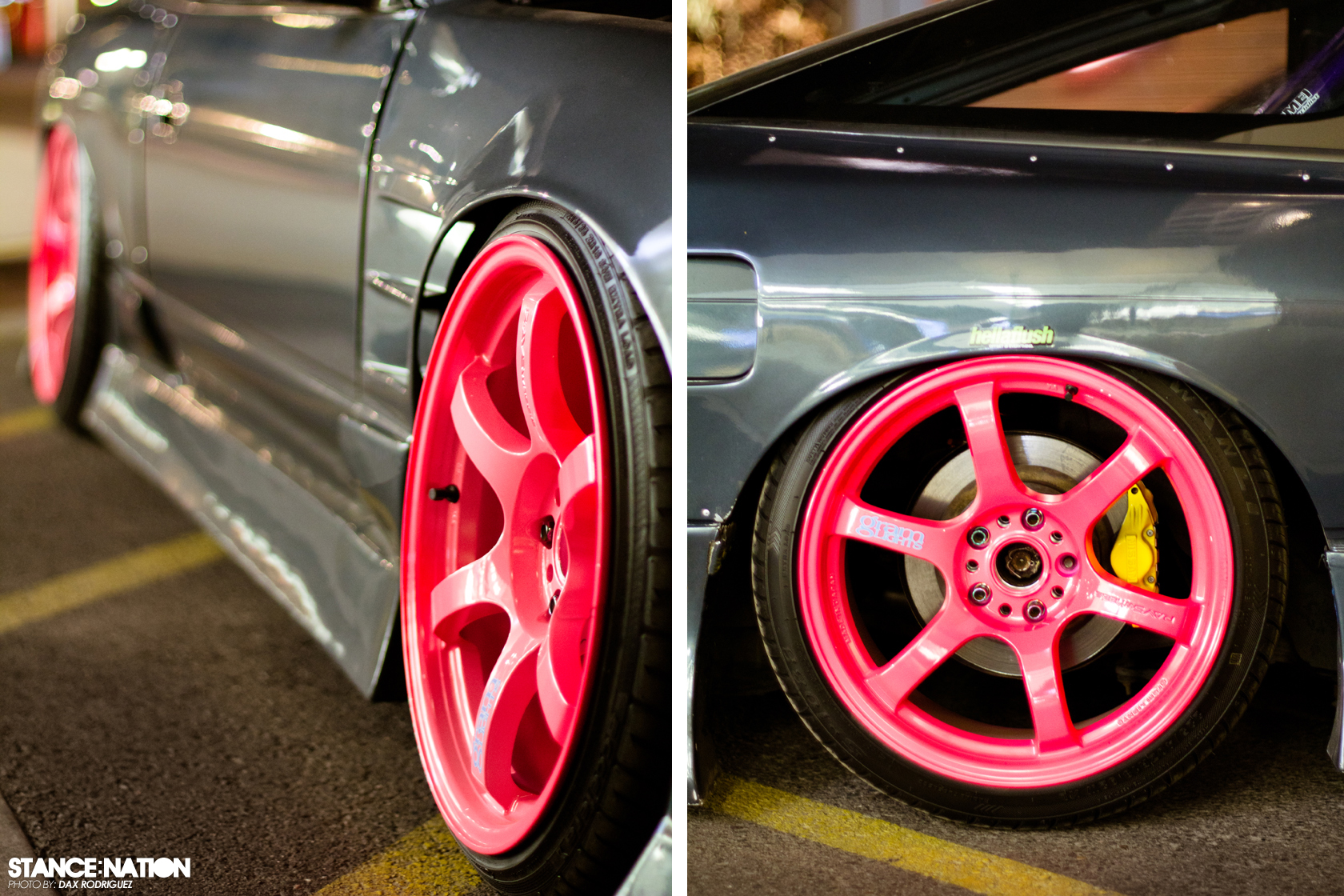 Finally the exterior. That banged up and zip tied front bumper may not tickle your fancy much but it means everything to those who live their life sideways. The entire BN Type 2 Kit looks absolutely awesome to us! Jared is rocking the 40mm Origin fenders up front and 50mm Origin fenders in the rear along with the sexy Kouki tail lights. The days that Jared does have a hood on, he runs a vented one by D-Max which we love very much! 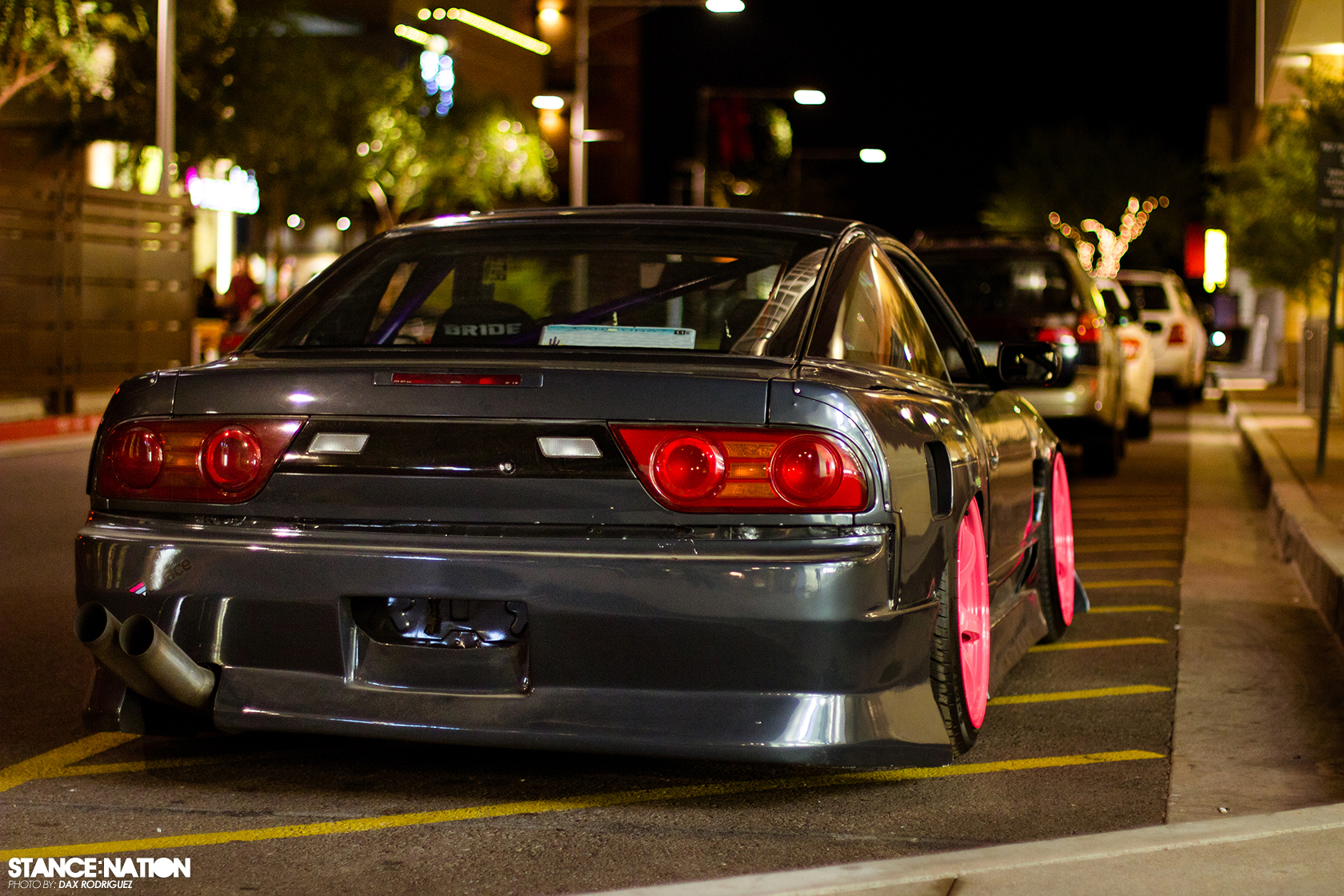 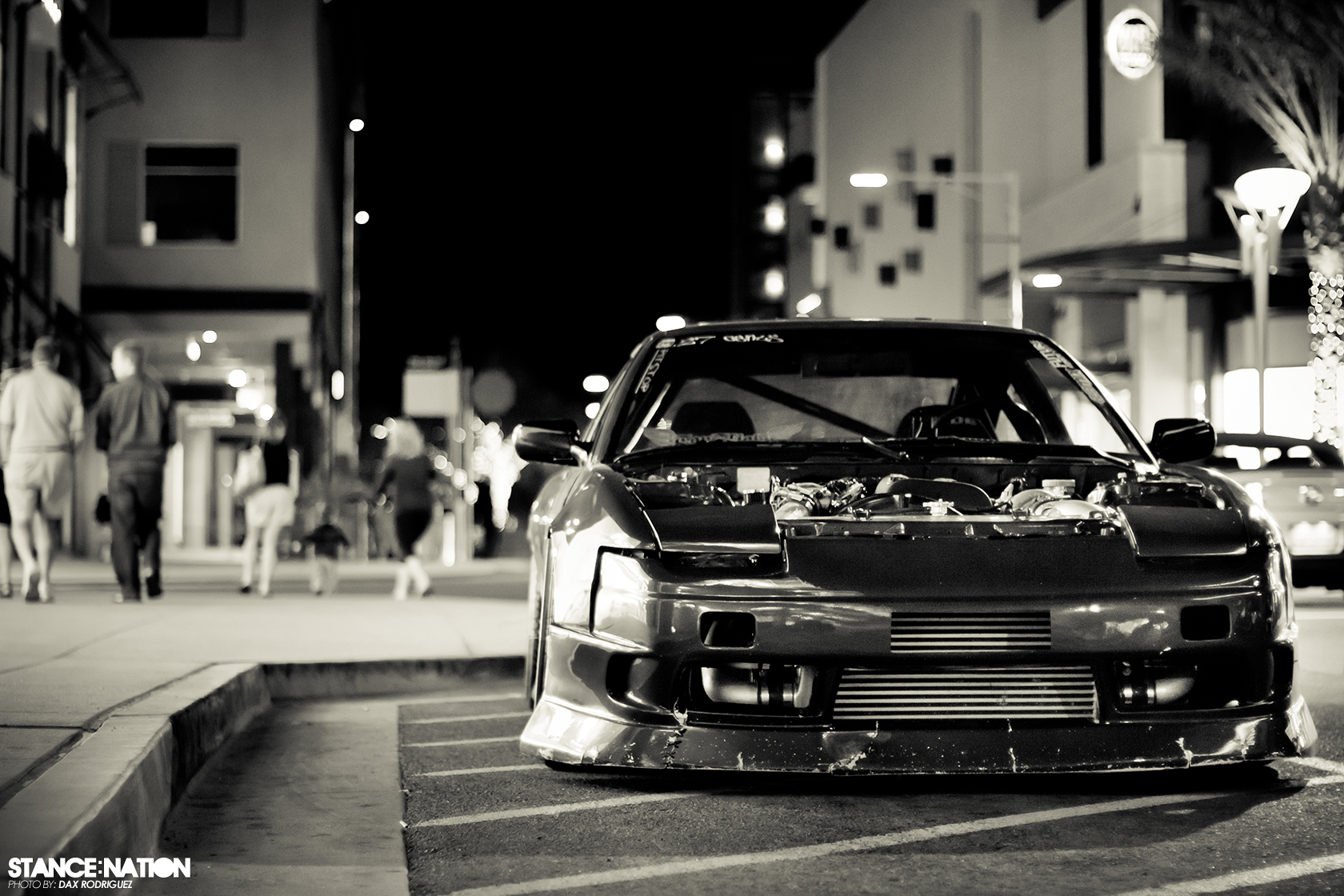 With that said, we would like to give a huge shout out to Dax and Jared for making this feature happen. Jared also wanted to give a huge shout out to his Team Top Flight friends for giving him a helping hand. Also, a huge thanks to COZ at ConceptzPerformance for many parts in this build. Last but not least, Pit Stop Performance as well. Feel free to shoot us an email at snfeatures@gmail.com if you think you’ve got a ride that deserves a feature! 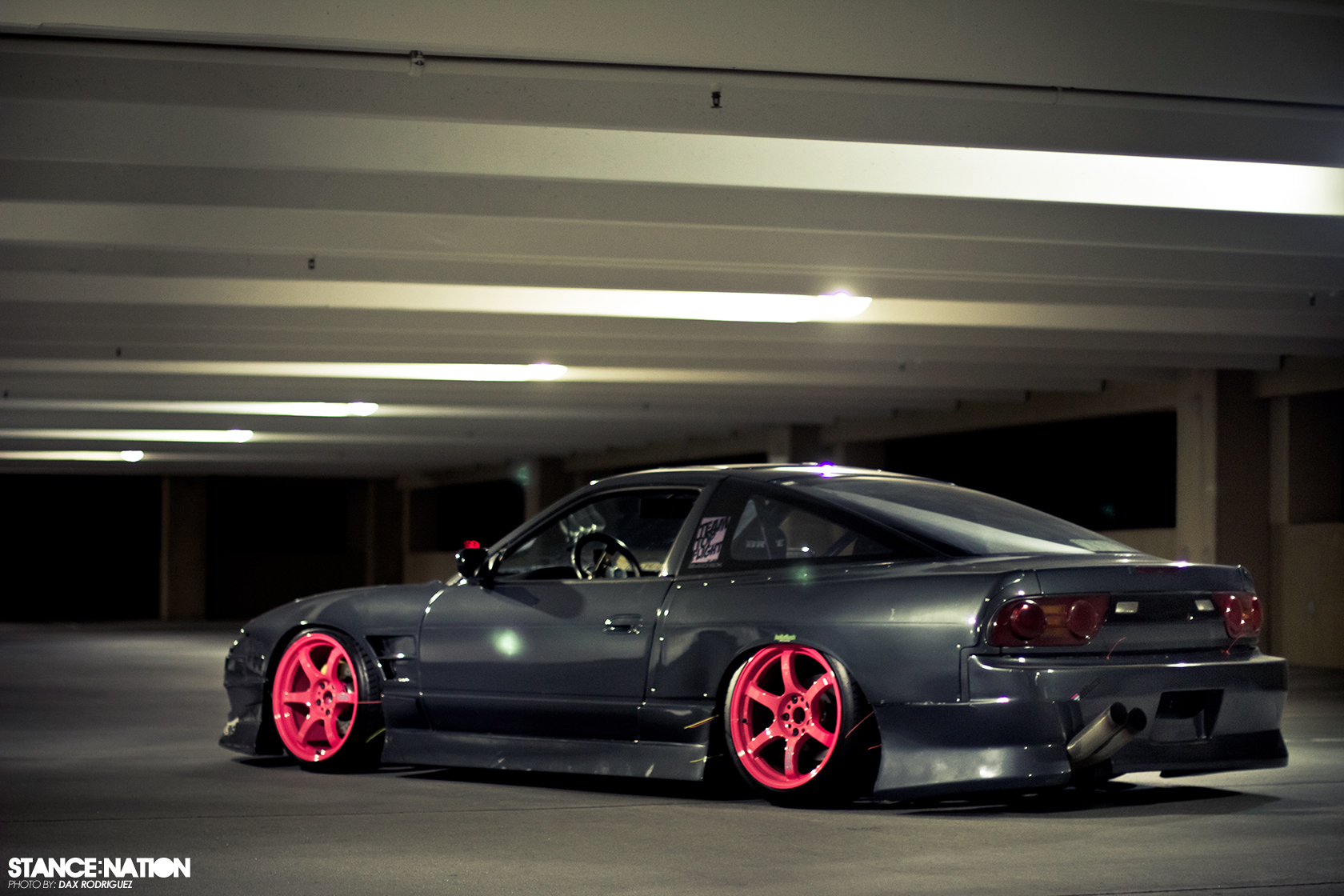 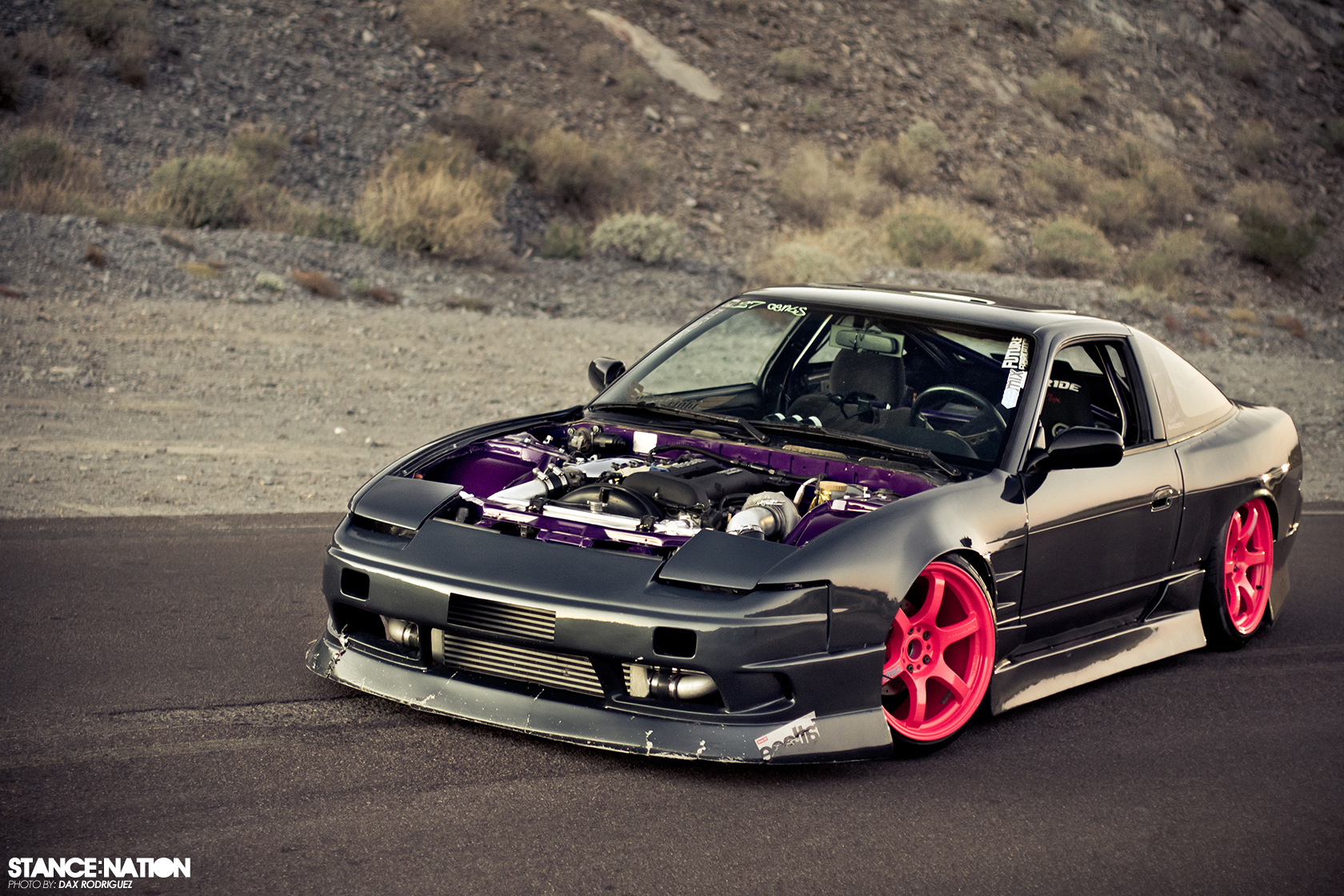