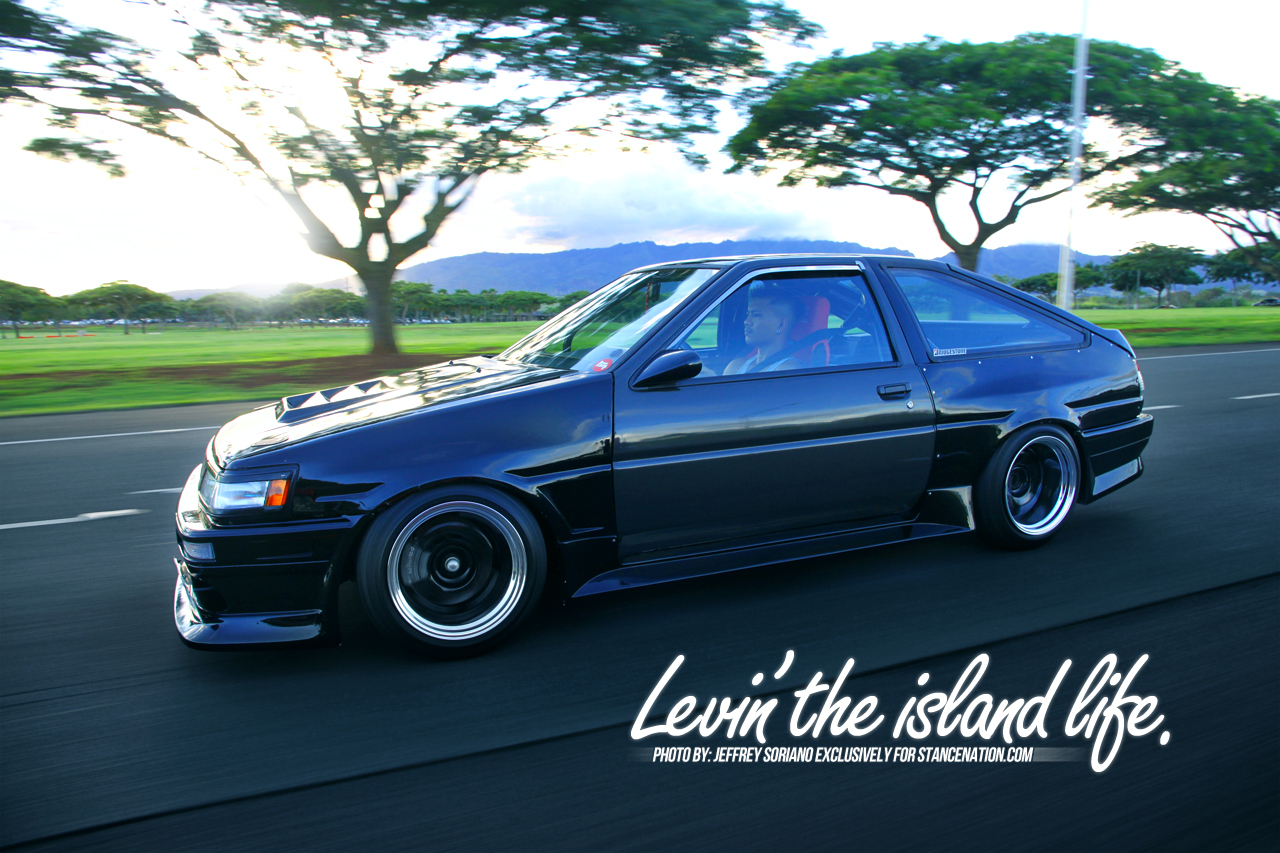 This is our very first AE86 feature, and we feel that we couldn’t have chosen a better one to start with. It belongs to a friend of ours who goes by the name Evade (hence the plates) and resides on the great islands of Hawaii. Feeling that it may be looked down on, he was a bit hesitant about having it featured on here because he purchased the car just the way you see it. He actually bought it from a really close friend of his who wanted to get rid of it after buying a new toy. Whom better to sell it to than someone whom you know will obviously take care of it and love it just as much as you would, right? 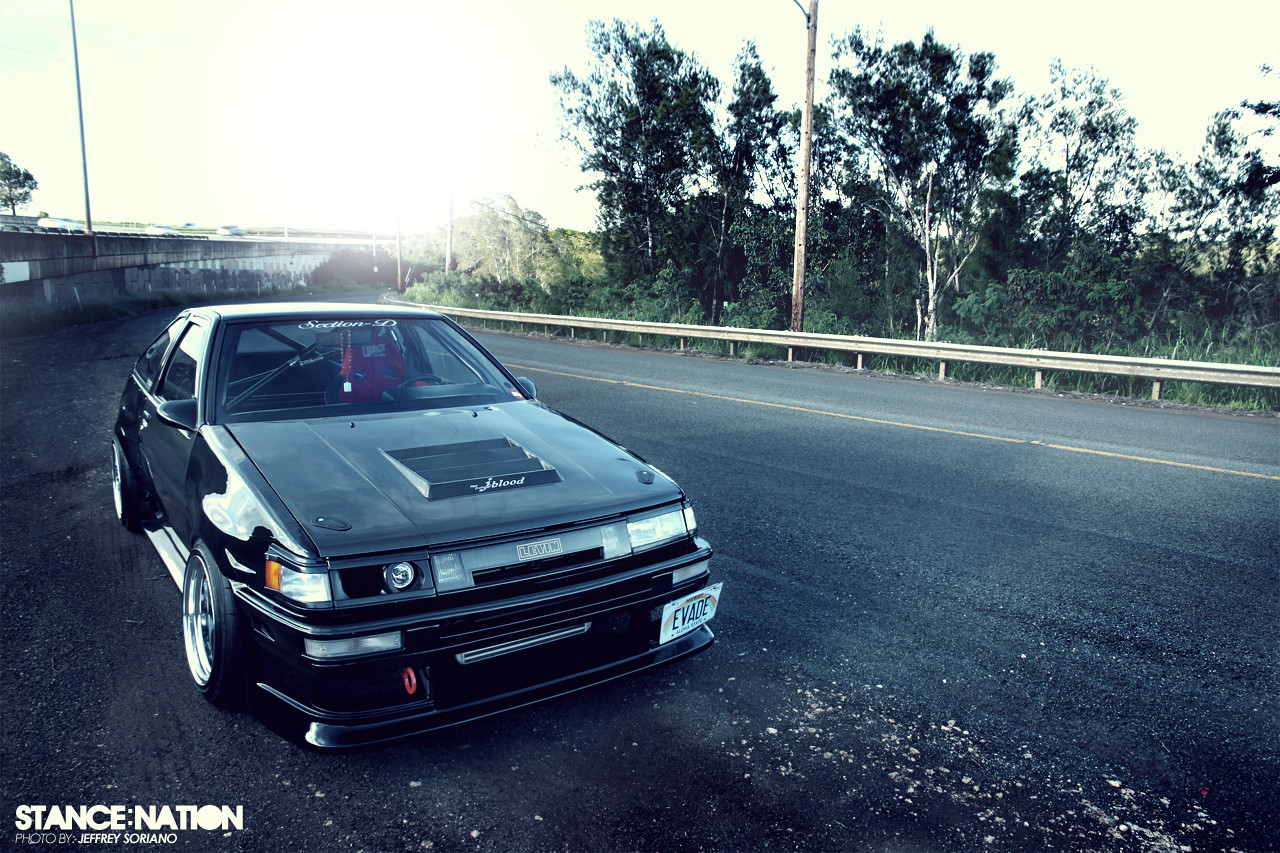 This isn’t Evade’s first ’86 though. He had another one that he used to slide and play around with earlier in his life, but after a couple of beautiful kids and a wonderful wife, the priorities took a huge turn. He now daily drives a clean Protege5, and uses this Levin to cruise in on the weekends and hit the local meet and greets! As a matter of fact, at the recent REMIX show he took two trophies home! While we won’t be posting the super long mod list of this beautiful thing, we’ll share some of the more important mods. Take the wheels for example, Work Meister S1 2pc in 15×9 up front and 15×10 in the rear. Double digits negative offset all around wrapped in Bridgestone Potenza RE-11’s. Behind the wheels, you’ll notice the Wilwood Big Brake Kit and Greddy Type-S Coilovers which do wonders for this car. 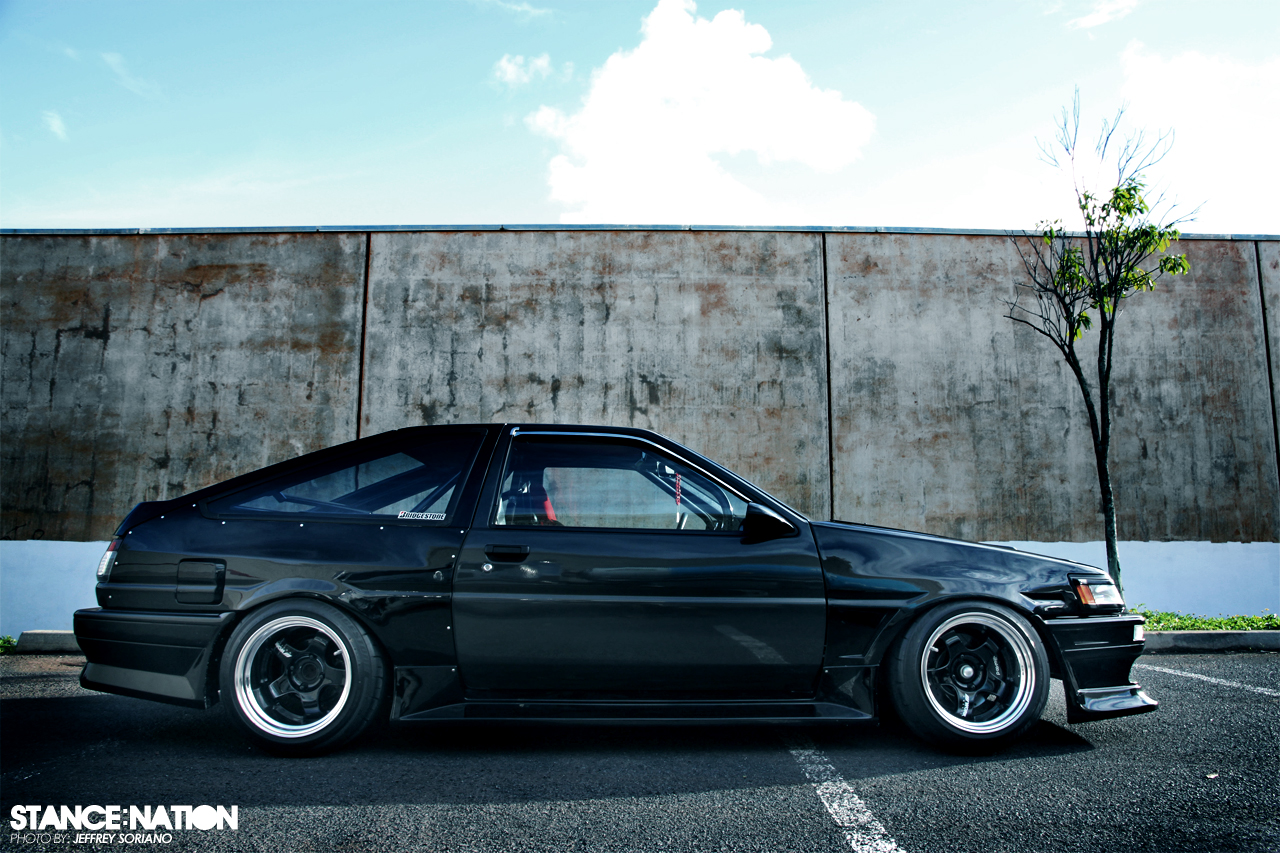 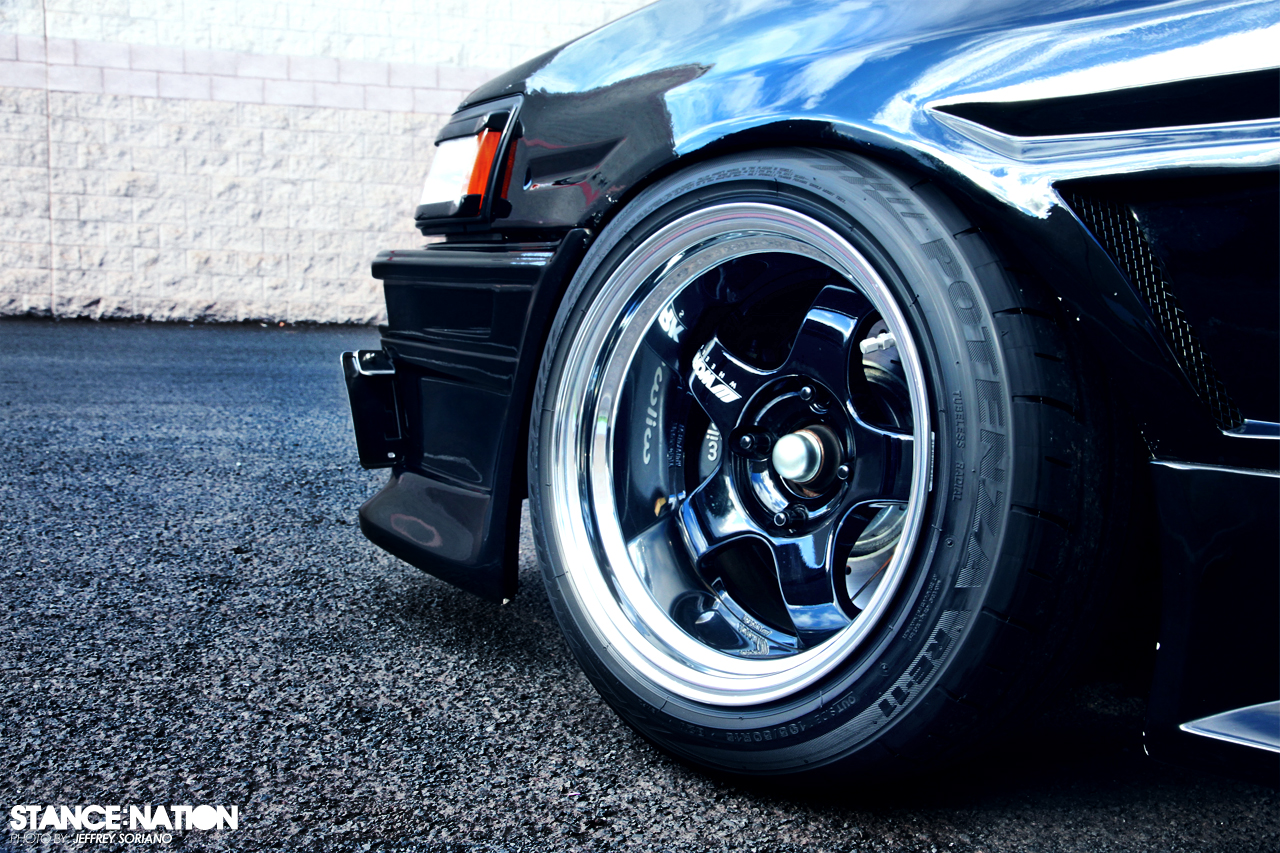 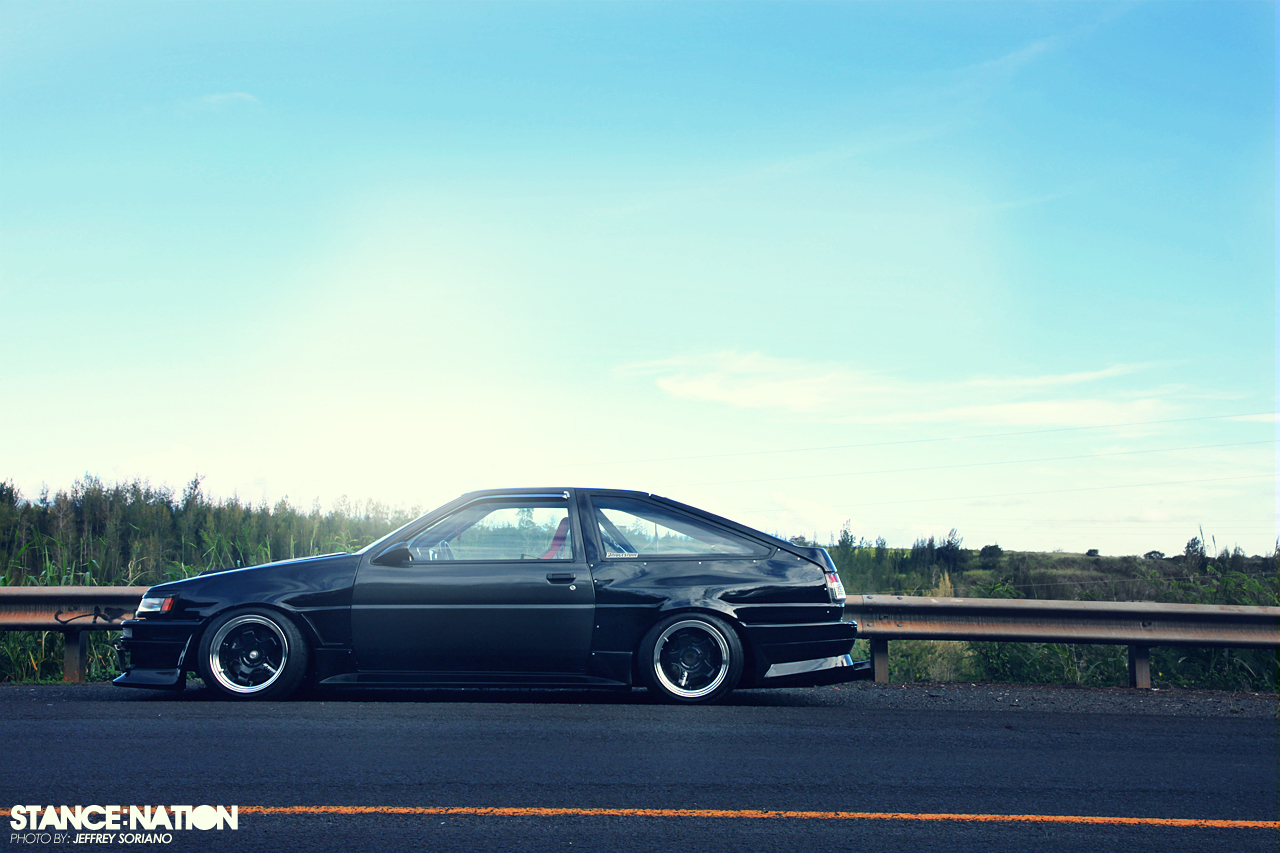 The exterior is dressed up with a Full Origin-Lab Stylish Bodykit (Levin), set of Front and Rear Wide Fenders along with a ton of other small stuff. If the “mismatched paint” on the door is throwing you off, don’t you worry. The doors are actually completely carbon fiber thanks to J-Blood. 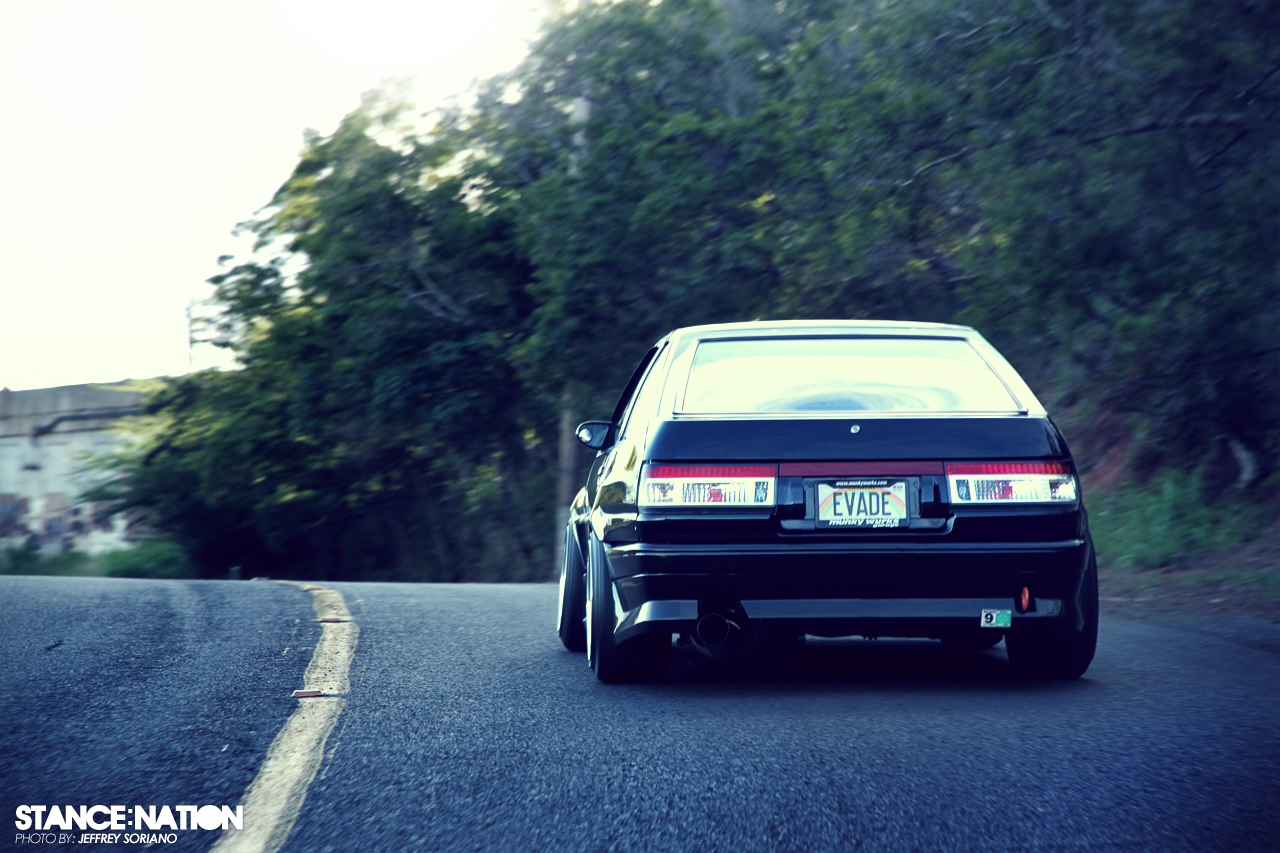 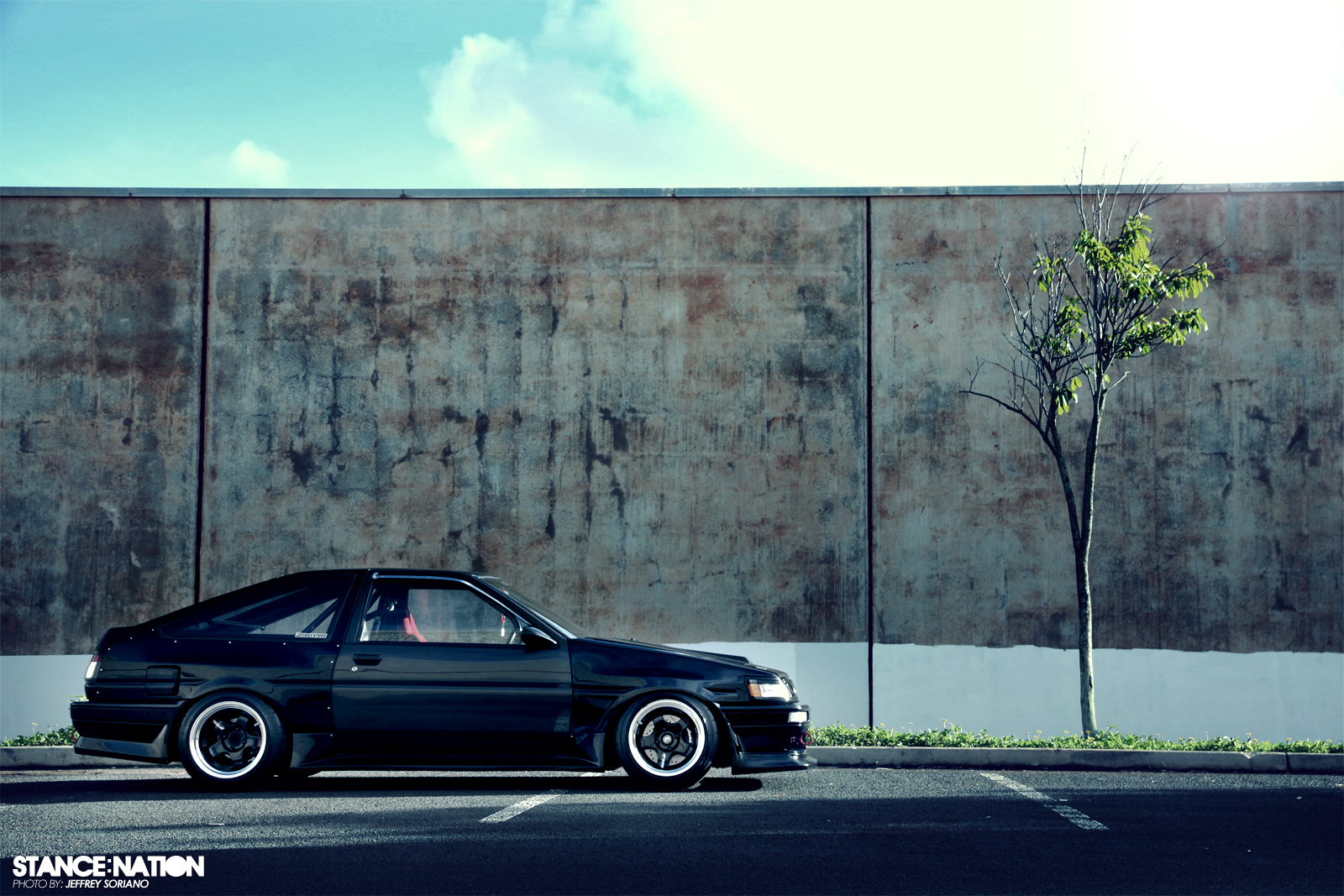 As you can tell from the pictures below, the interior has been completely gutted and redone. First thing you might have noticed is that bright red ChargeSpeed Bucket Seat and the incredibly awesome Safety 21 8pt Roll Cage with all the Cusco Add-On bars. Evade is absolutely loving his AE86, but he wanted to make sure we give credit to Russel who pretty much helped build majority of the things on this car. 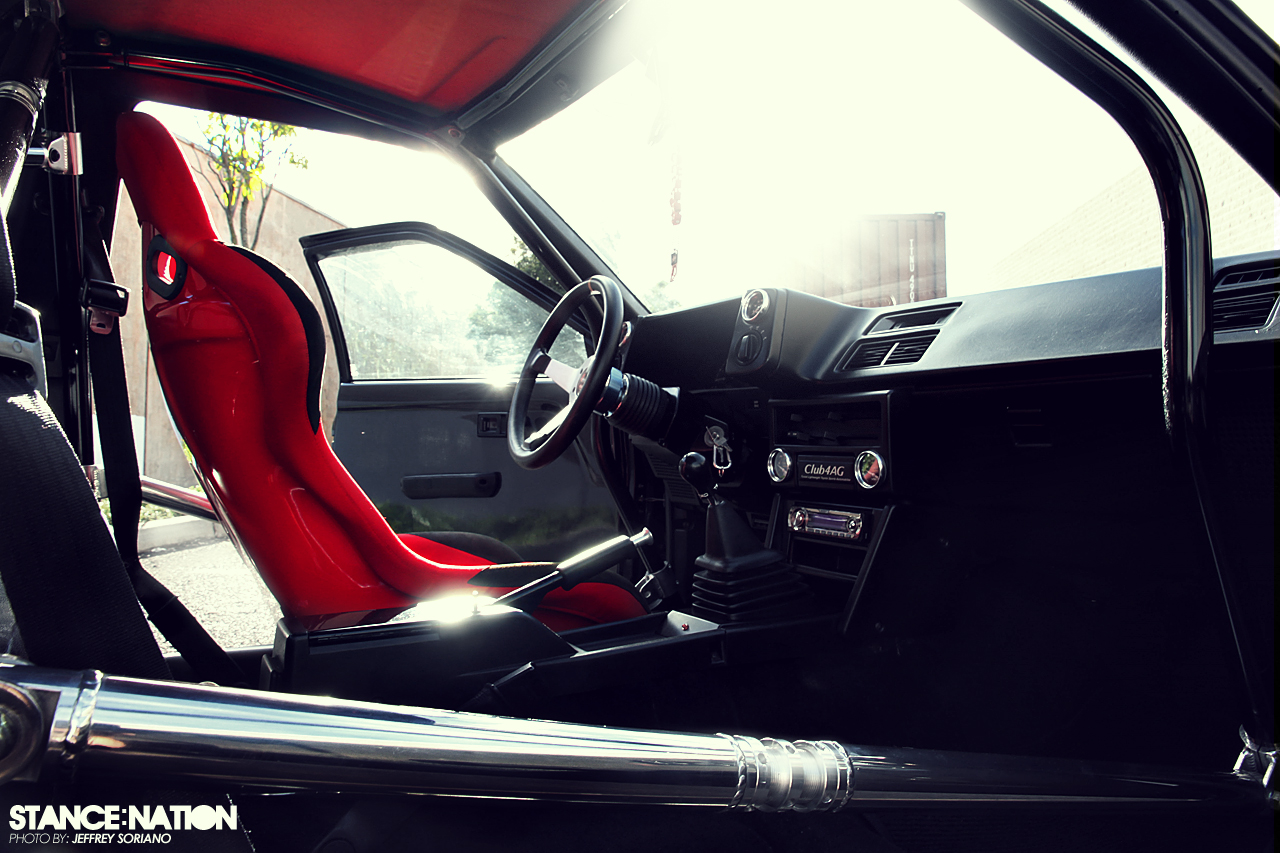 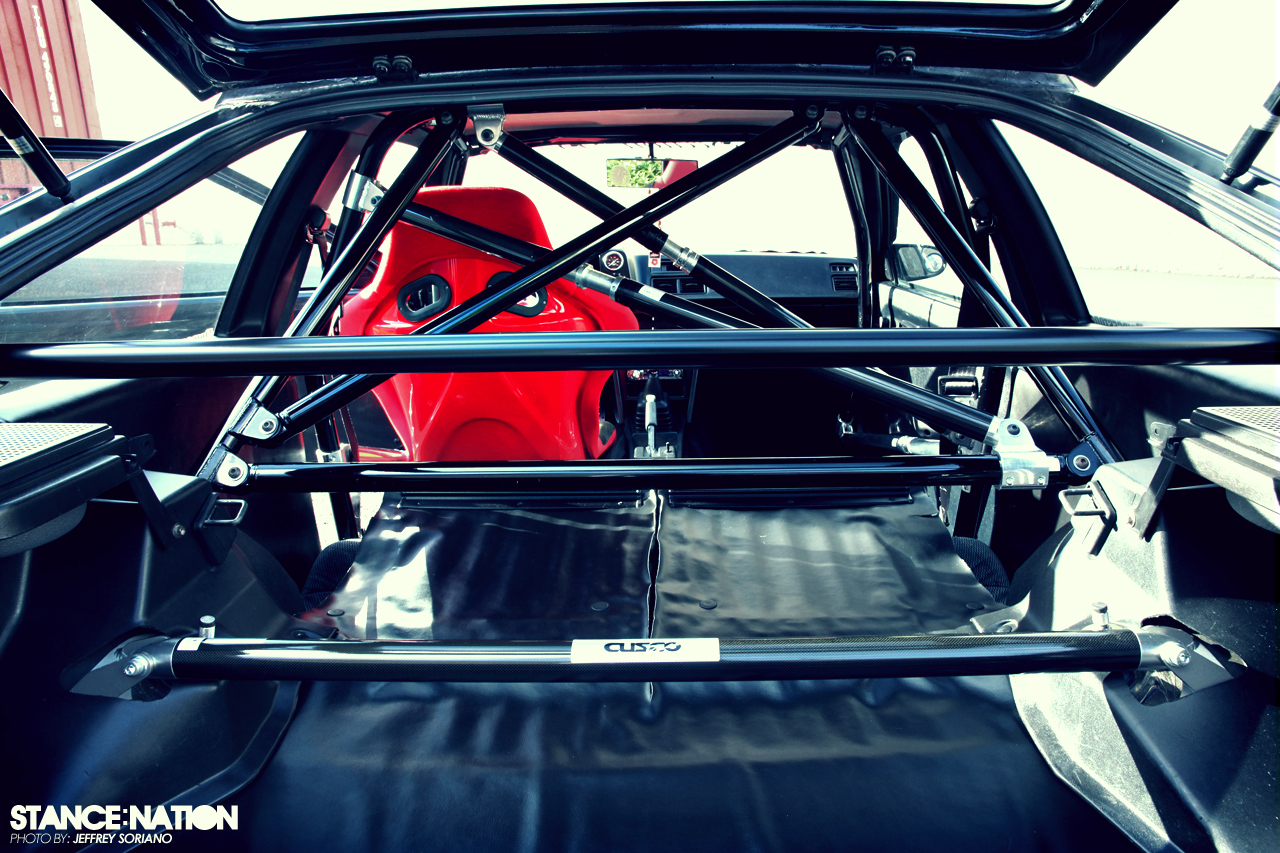 We were asked to keep the “small” modifications under the hood private *for now*, but if you know your Rolla’s you’ll notice the JDM 4AGZE AE101(DLI) engine and that C/F Cusco Tower Bar. We’ll respect Evade’s decision and keep the rest to ourselves, but he did let us know that he plans to strip it down and get it redone/rebuilt. Also, a new “extra” set of rims will be coming in the very near future. 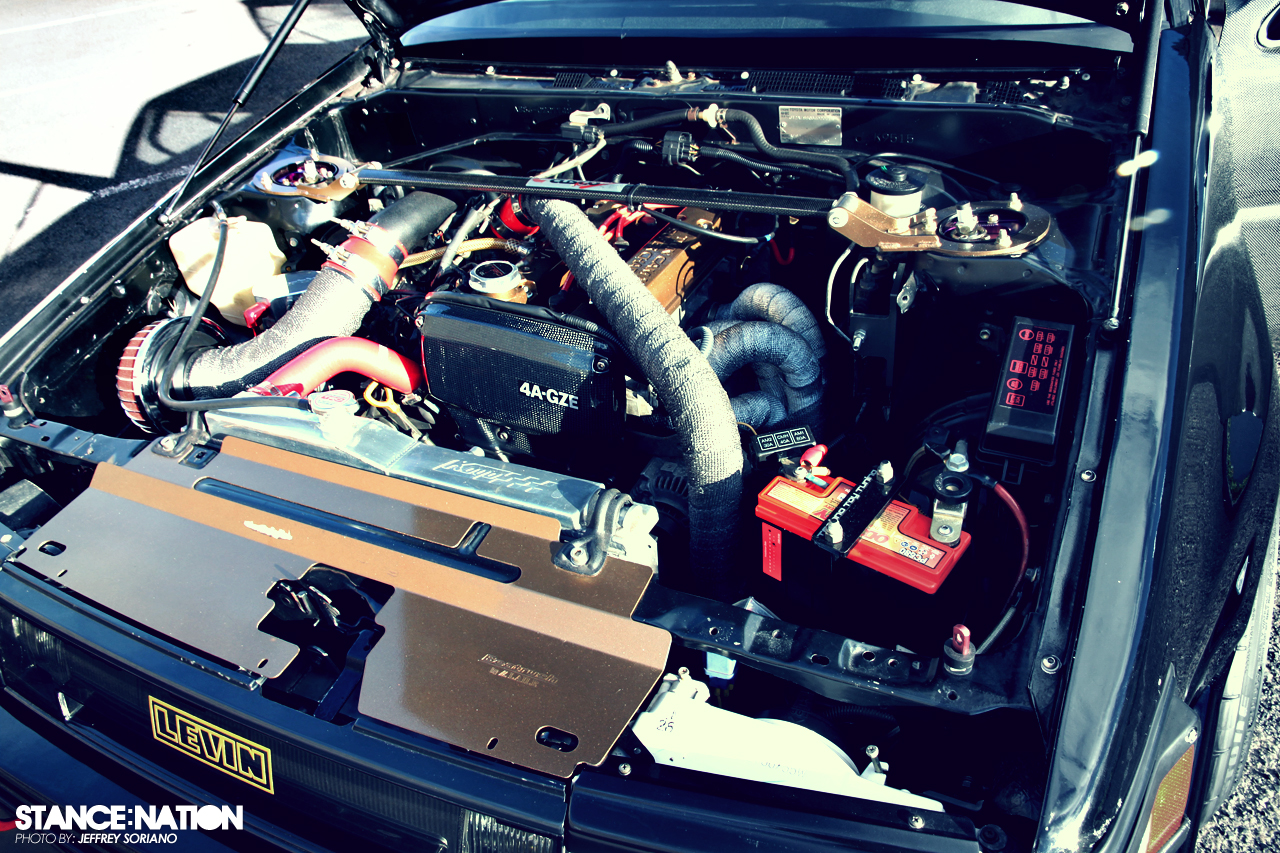 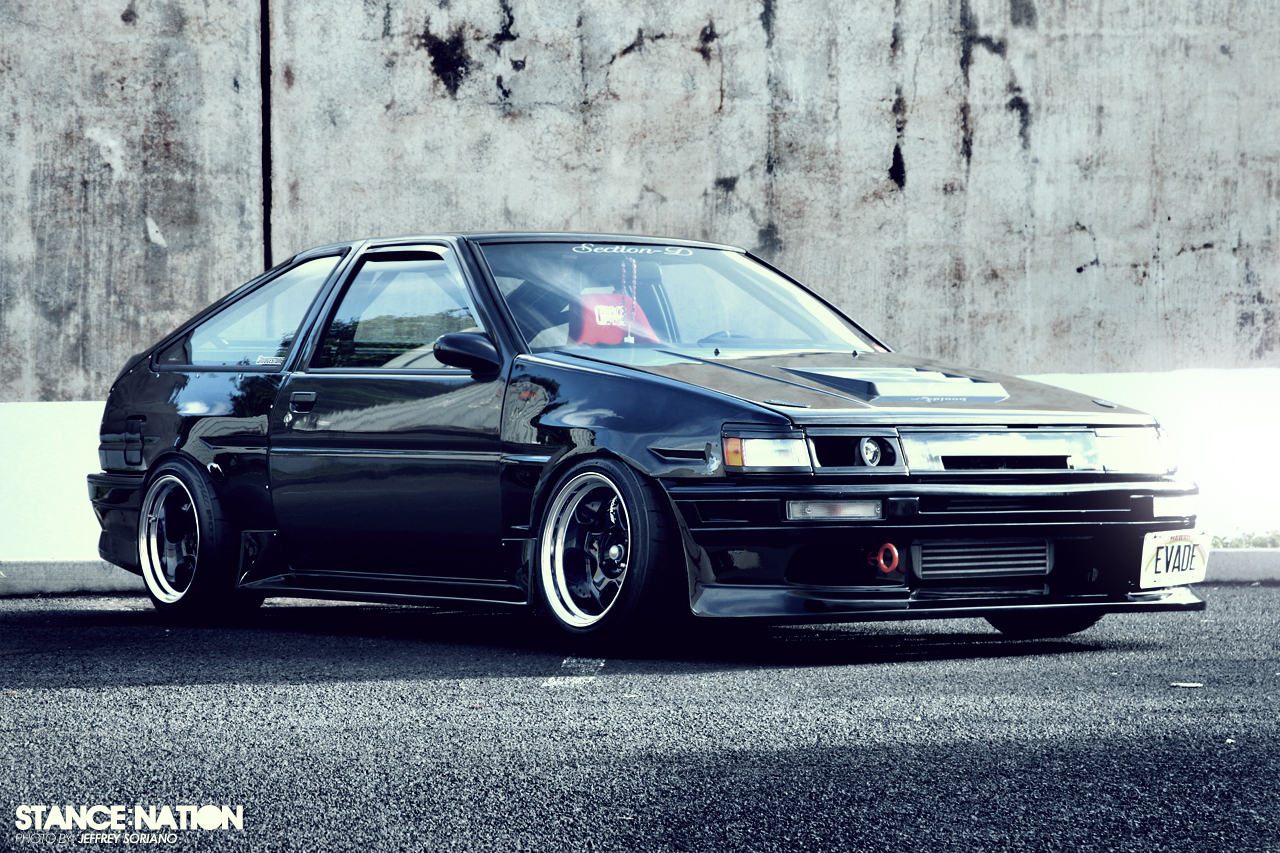 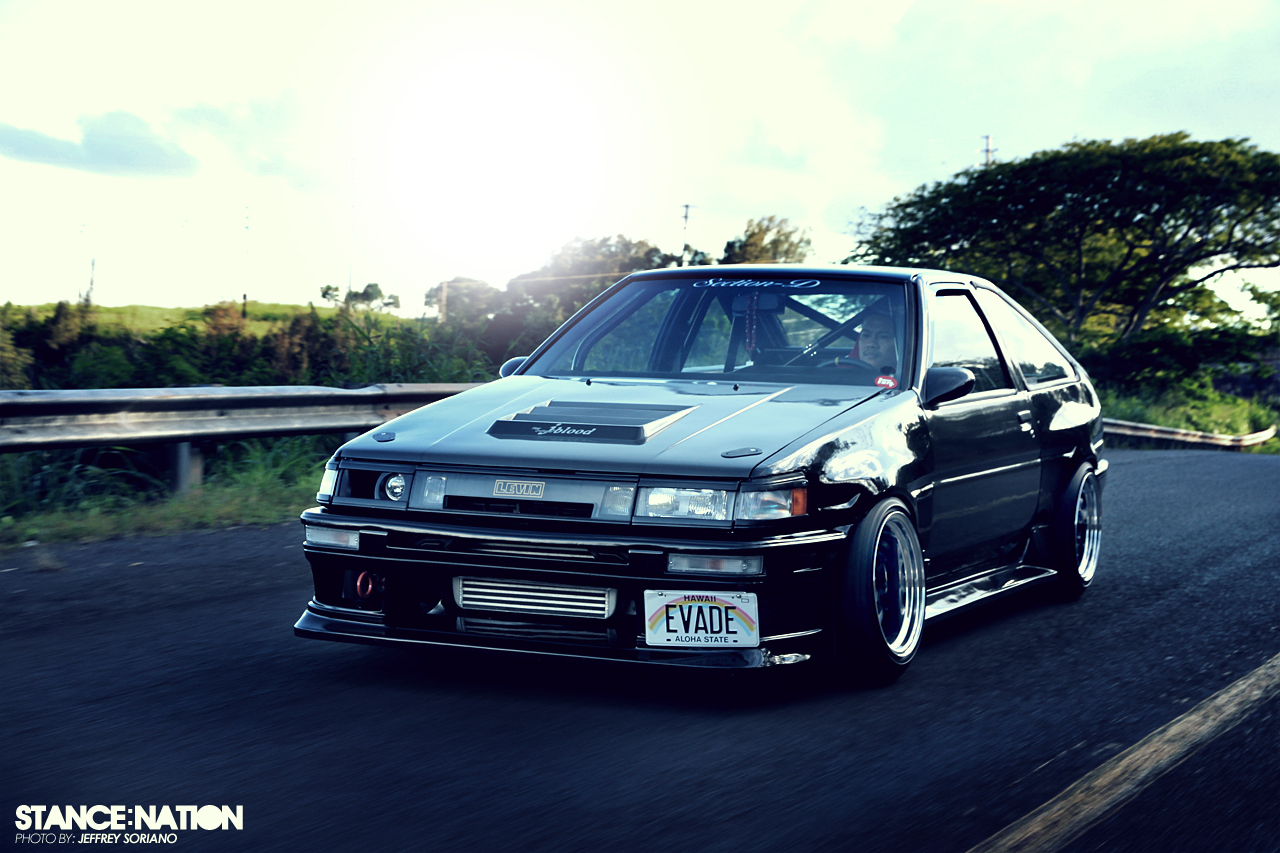 We will leave you with some shout out’s and thank you’s, as always. Big thanks to both our photographer Jeffrey Soriano as well as Evade for making this happen. Big shout out to Section-D for doing it big out in Hawaii and everyone else who plays any part of this “fitment” scene. If you’re located on the islands and would like to get your car featured on here, please shoot us an email right away! Until next time, please stay safe and make sure you hit up our forums from time to time! 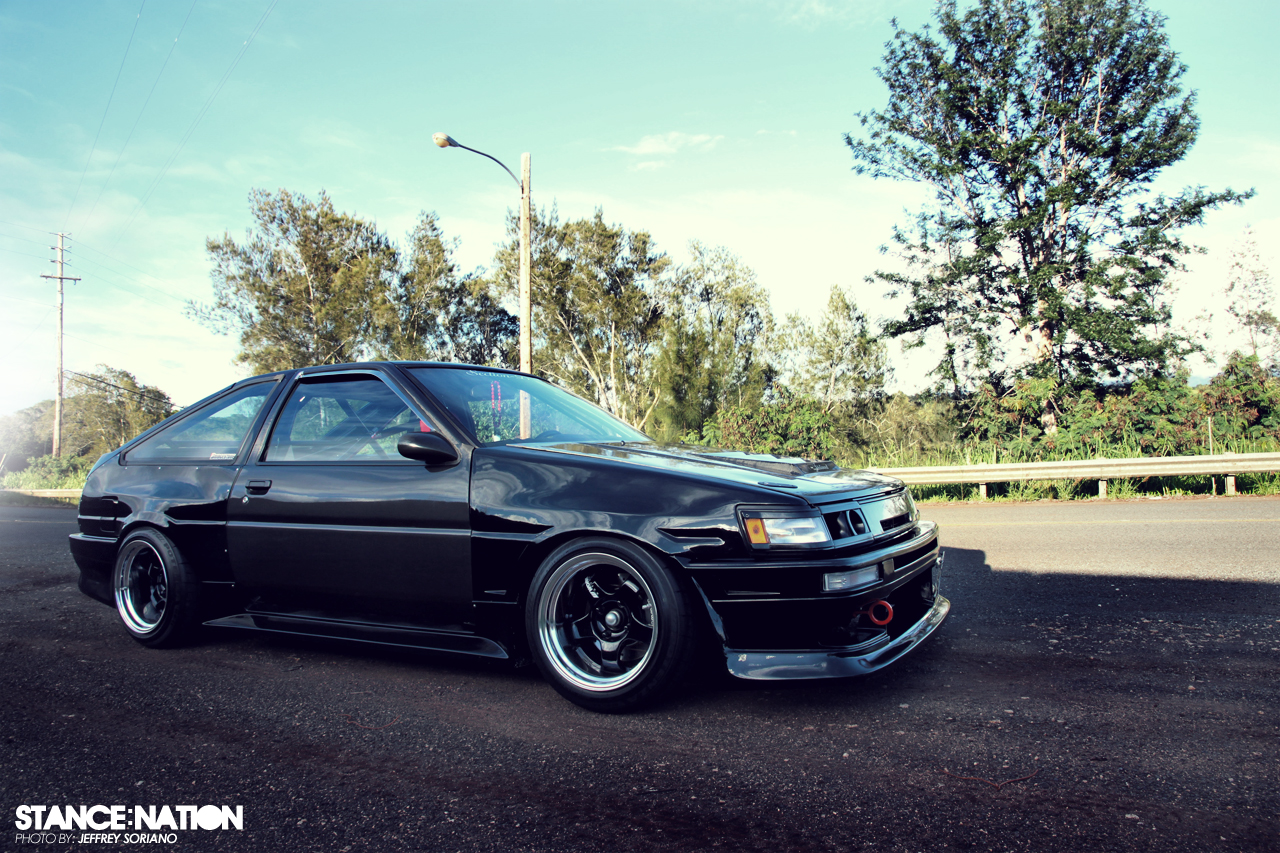 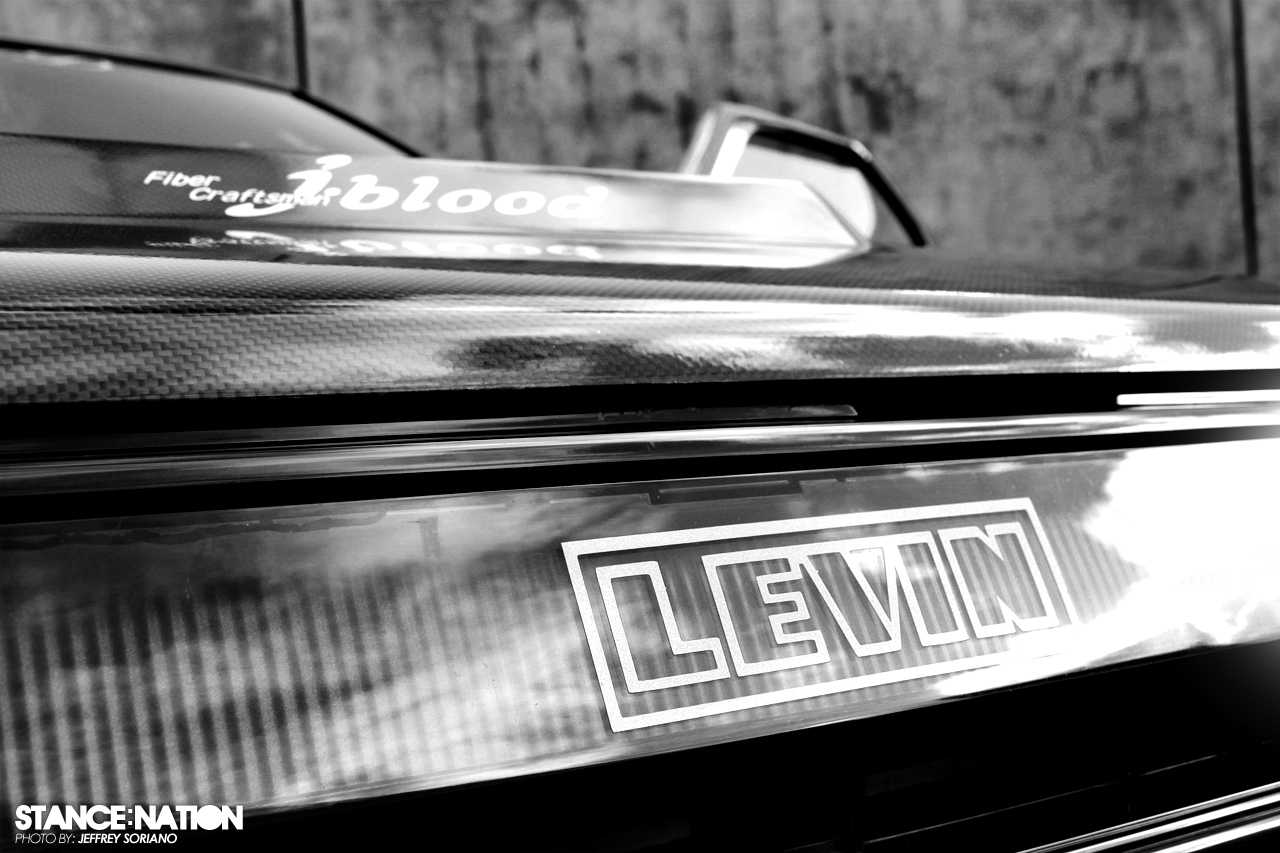