It’s a rite of passage. The great welcome to manhood (or womanhood). It’s what keeps teenagers up at night, bright-eyed and glued-to computer screens until the wee-hours of the morning. No. It’s not puberty and the…curiosities that accompany adolescence. It’s something much more important and vital to our happiness – the first car. 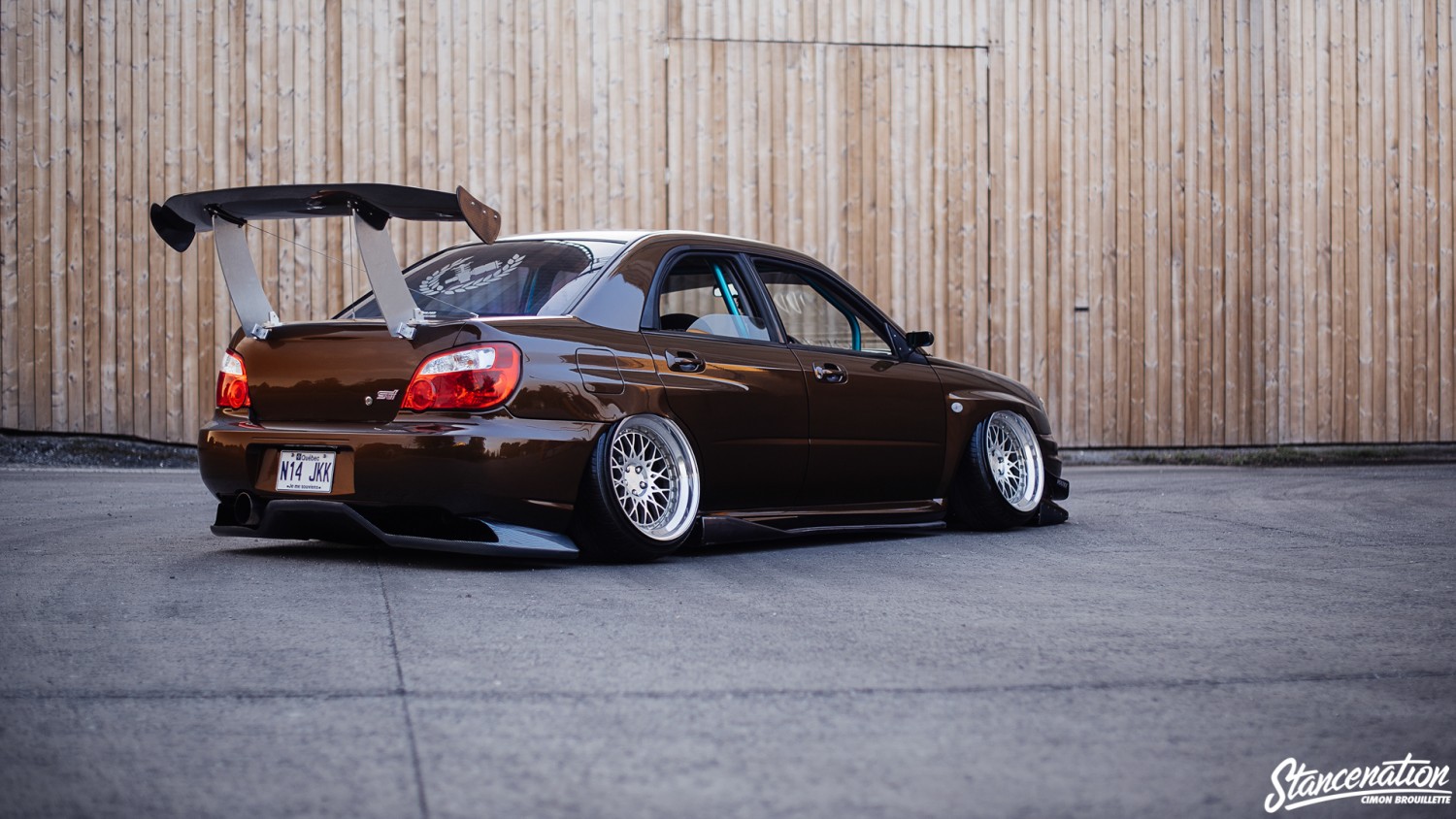 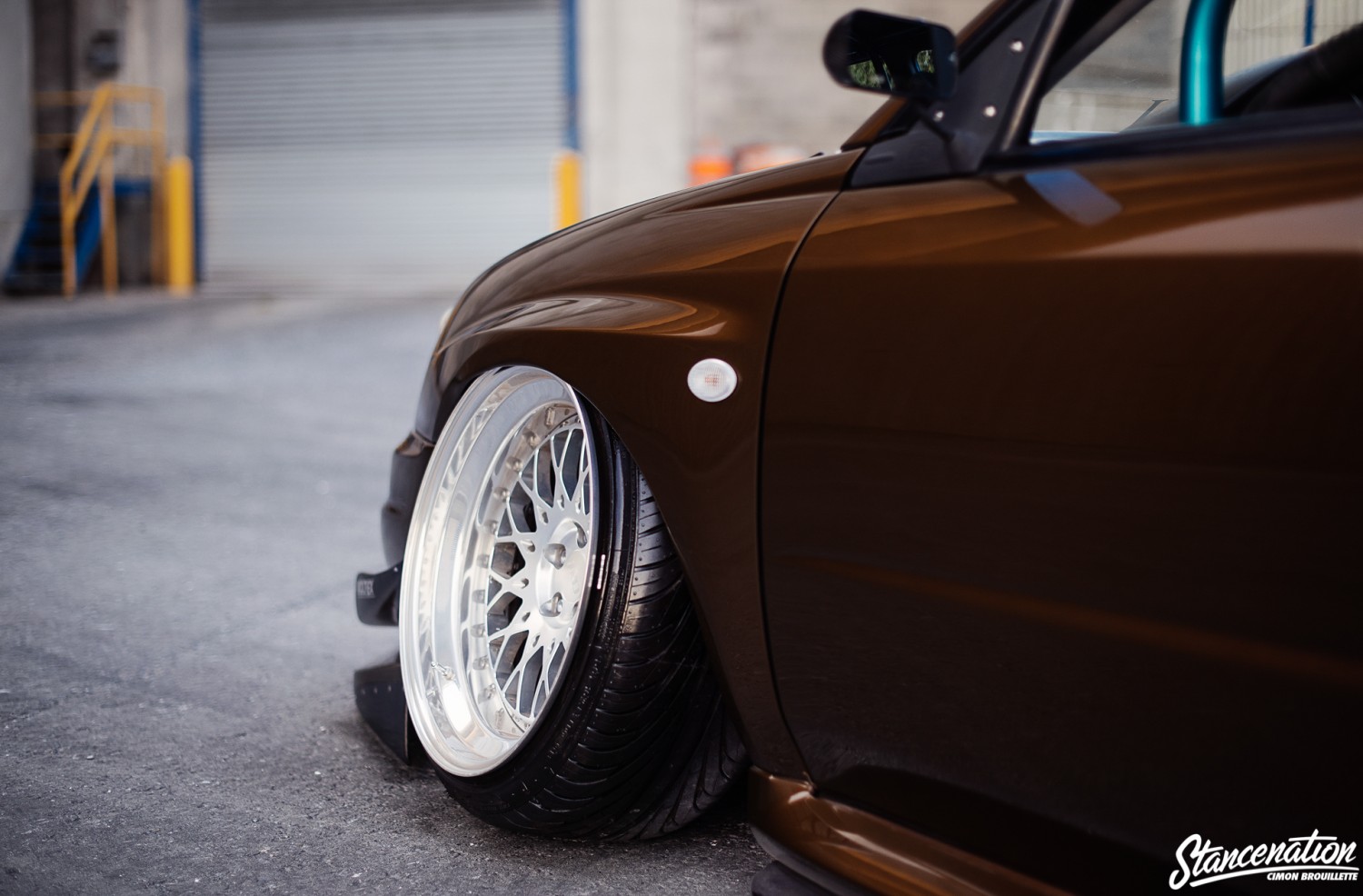 Now, some first cars are a bit more desirable than others. However our excitement and the pride derived from the freedom and independence granted by that car is unchallenged; regardless of the cost, street-credibility, or performance capability of the make or model we are blessed with. As time marches on, some of the most highly sought-after hardware has slowly become accessible to more buyers. Read: first cars keep getting cooler. 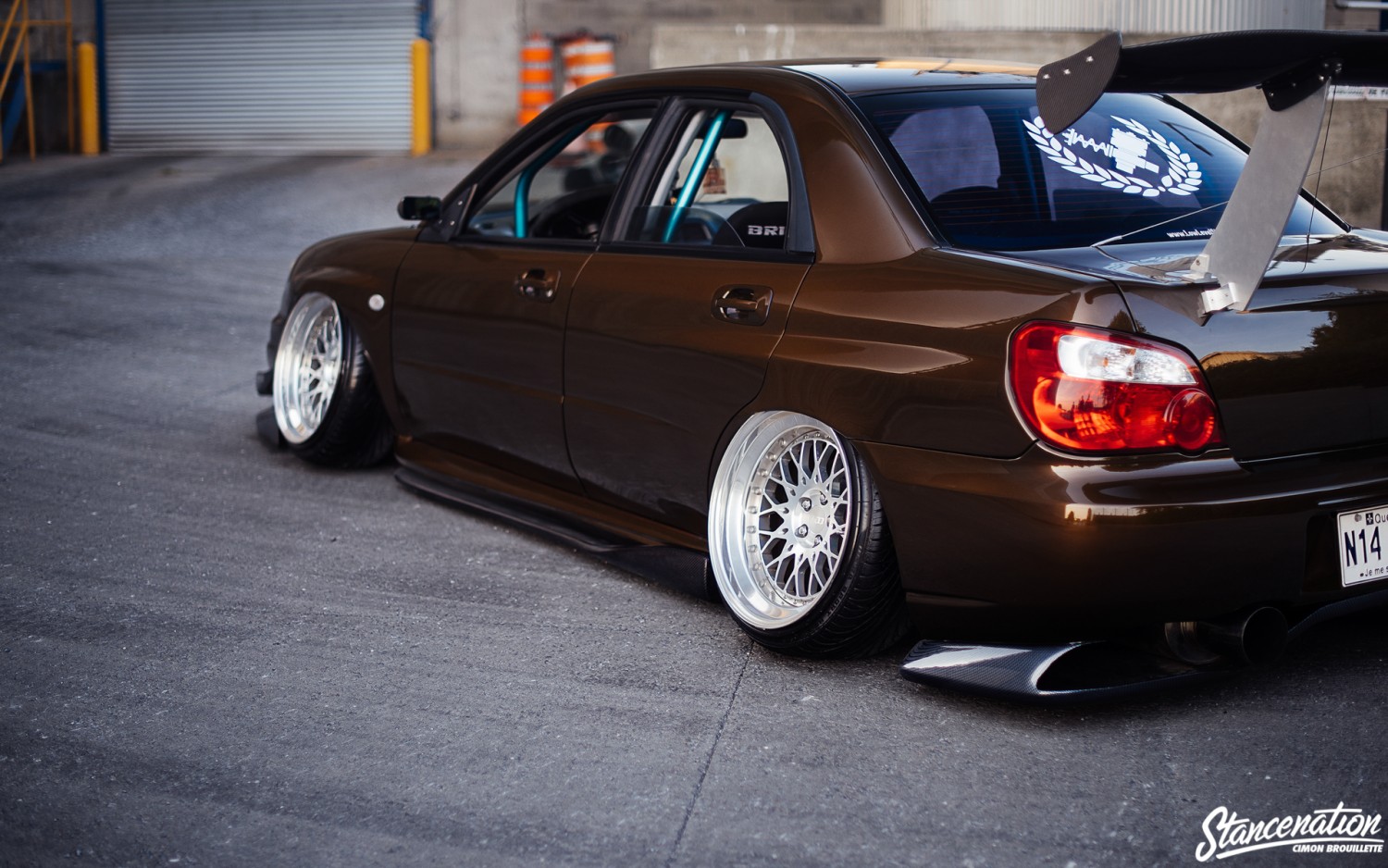 Louis-Phillipe Villiard took ownership of this 2004 Subaru Impreza WRX STi as his first car at the ripe age of 16 in 2012. He has spent the past three years ardently shaping the potent platform into its current state. When North America finally got their paws on the STi-variant of the Impreza WRX in 2004 enthusiasts went wild. Offering an impressive 300/300 power output out of the box along with the proven Subaru all-wheel drive drivetrain the STi continues to be a staple among gearheads everywhere. It is often difficult to avoid an encounter with a WRX or WRX STi at any given track day, autocross, test and tune drag night, or show/meet. 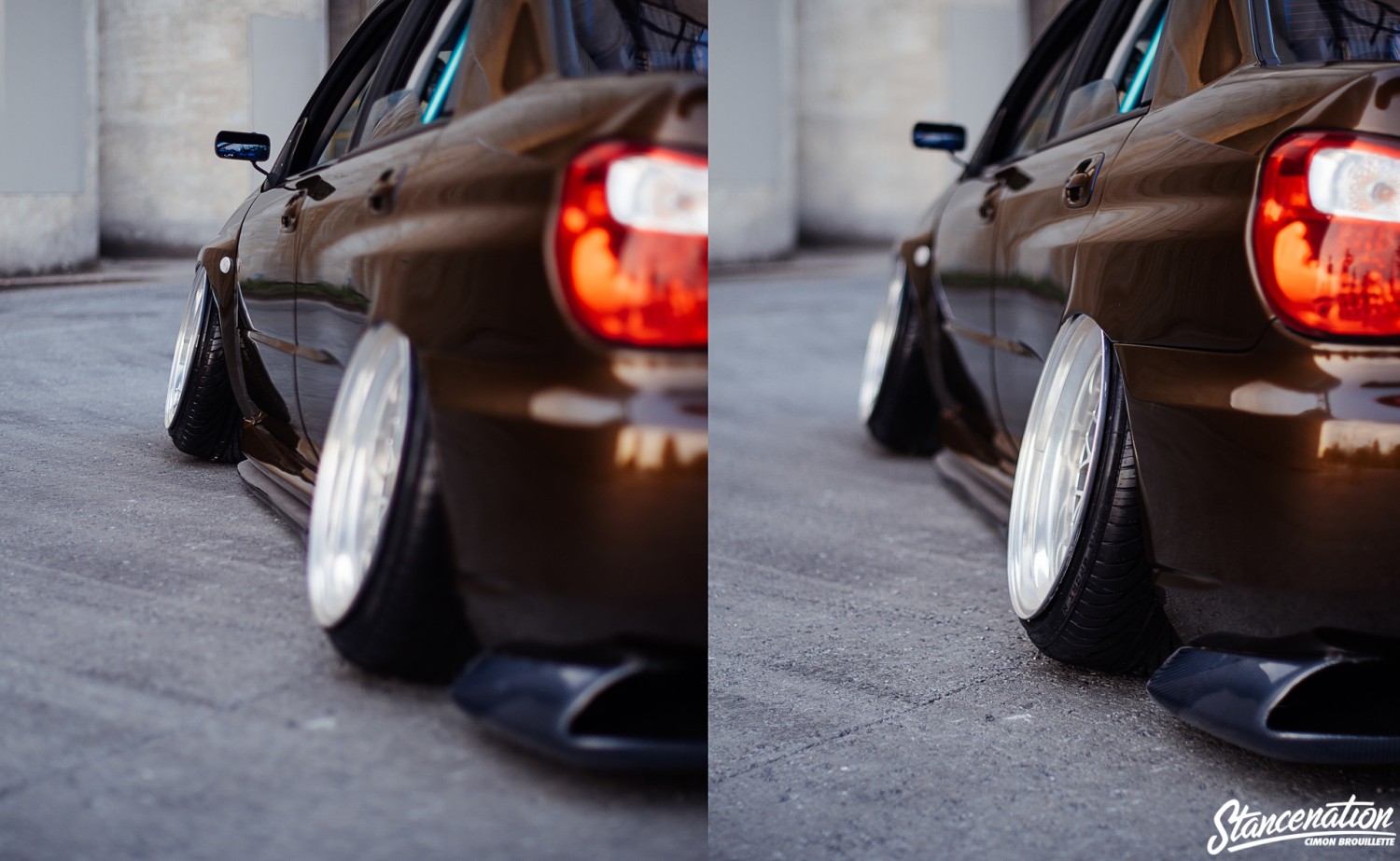 Of course, the motorsports heritage that brought the WRX into fruition has also provided the basis for intense division amongst its fans. Extremely low, stretched-tire examples such as this car have been at the center of many an online war for several years now. Regardless of your stance on Subaru stance: a closer look at Villiard’s STi reveals that it is a truly impressive vehicle that offers much more than jaw-dropping camber angles. 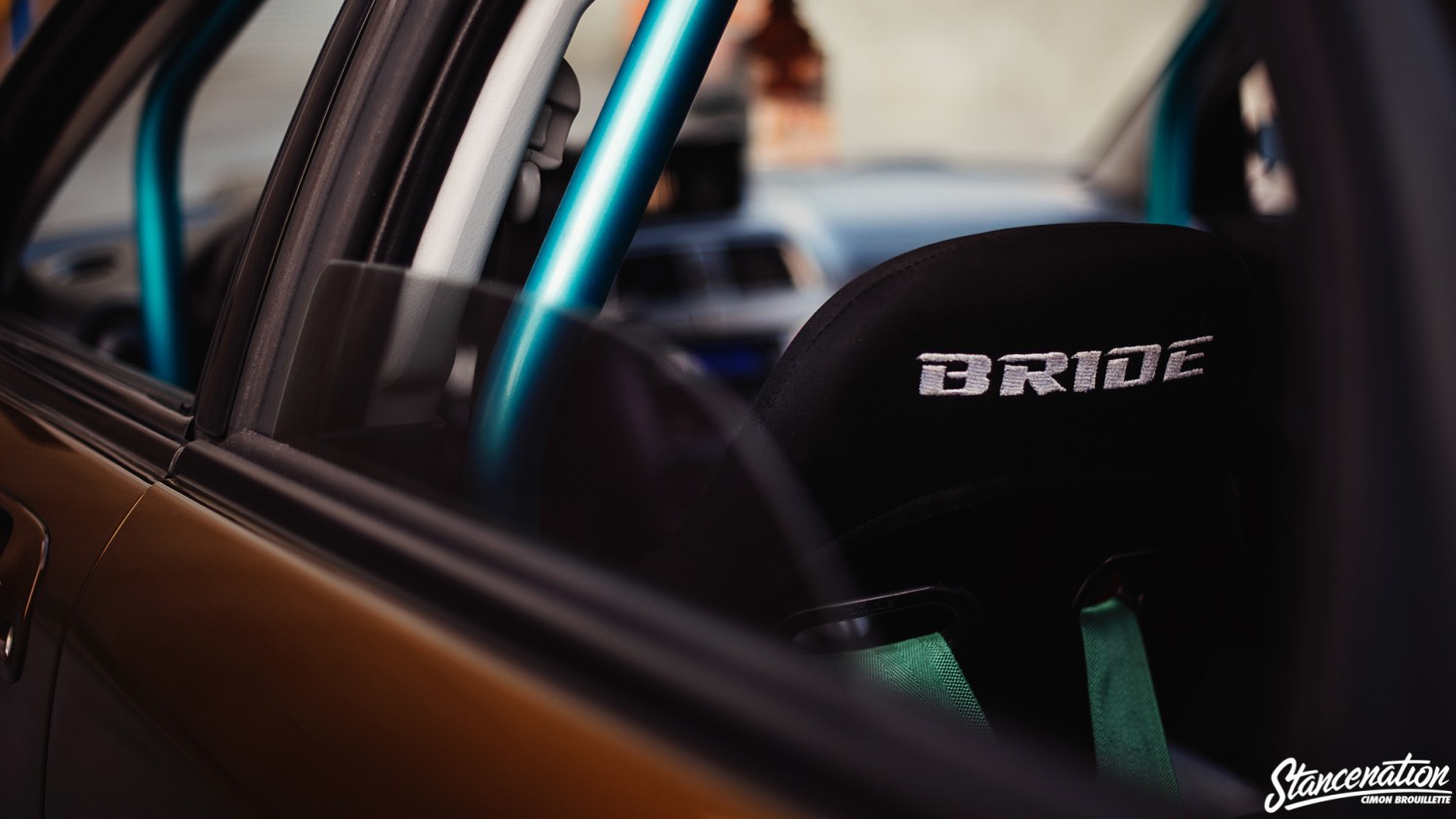 The current iteration of the Subaru is the result of a thorough rebuild completed this past year. Aggression is the name of the game. Voltex aero components are found at each end. A monster GT wing towers above the trunk, while a carbon hood ventilates the engine bay. A rich chocolate brown finish covers the car, accentuated with various carbon pieces. Villiard tells us the wing may be removed in the next phase of the car. 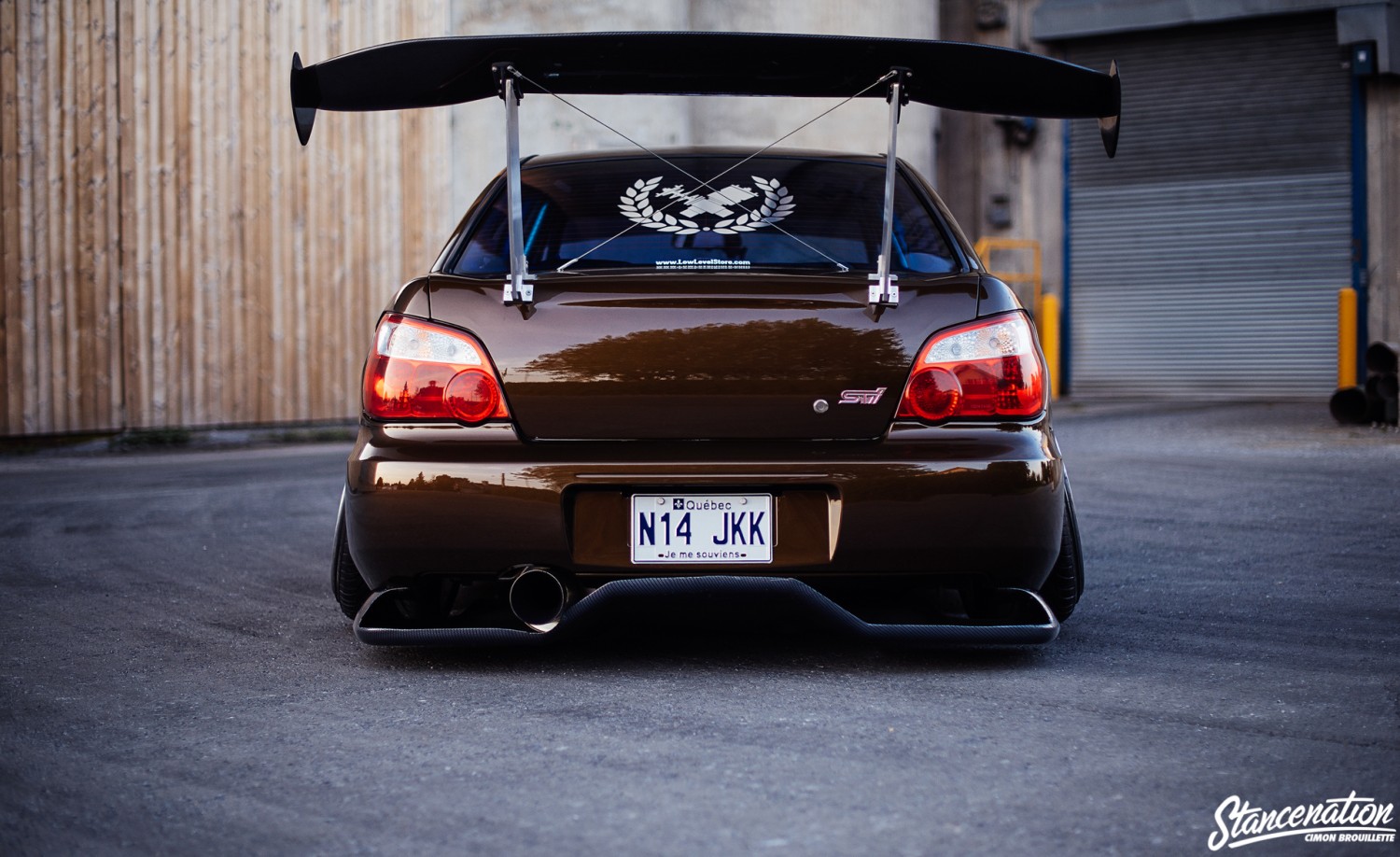 Enhancements within the STi cockpit read like a who’s who list of Japanese interior tuning. Nardi, Bride, Cusco, and Takata join forces to ensure the experience within is just as impressive as the car’s exterior belies. 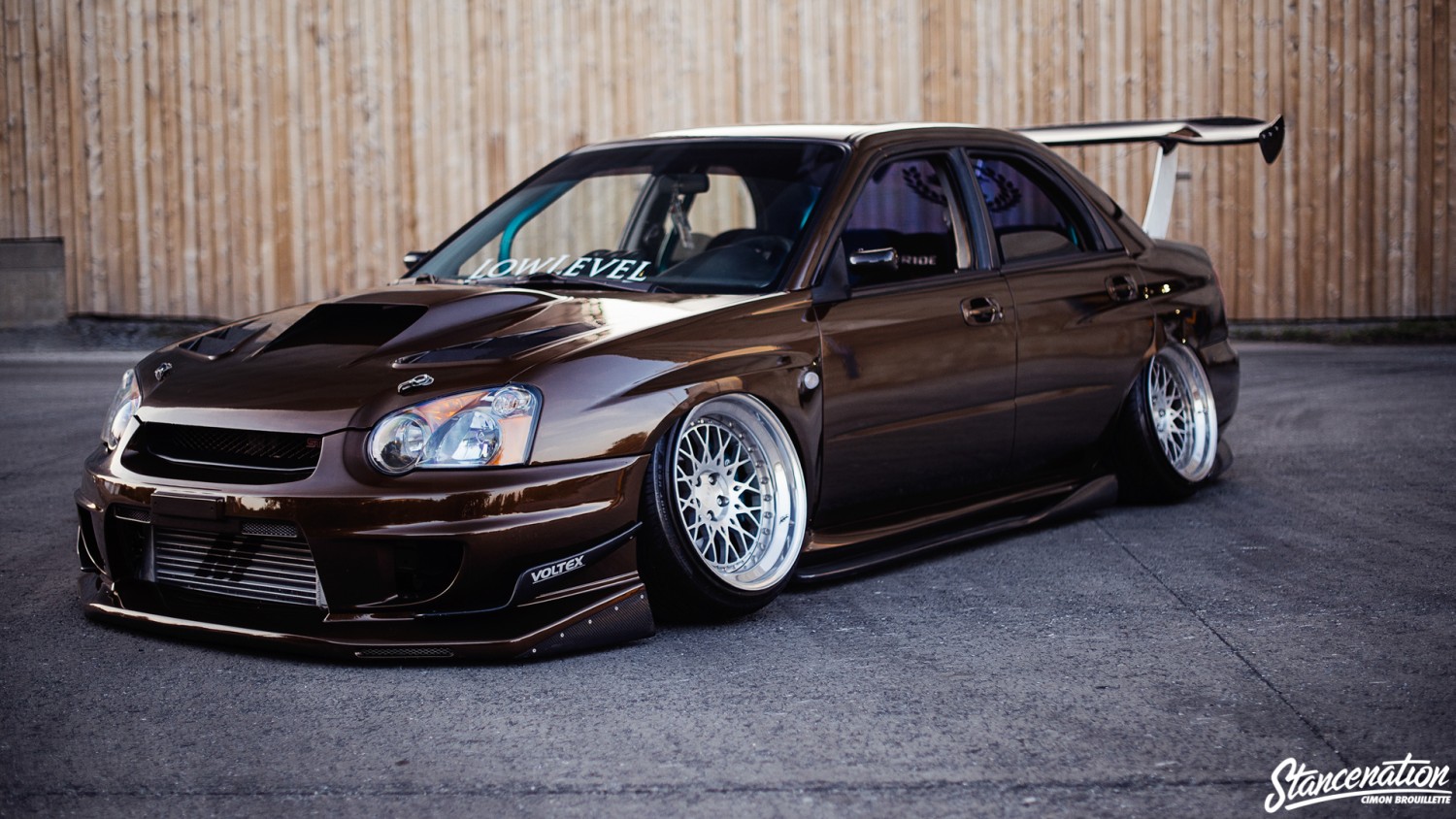 Early years of Louis-Phillipe’s STi were spent static. However, the un-adjustable daily experience of incredibly low ride height began to take its toll on the chassis. The complete build-up over the past year sought to remedy those complications. AirLift Performance managed via Autopilot V2 now allows for necessary height adjustments. 18×10.5” CCW D240 wheels sharply tuck within the chocolate brown fenders at extremely dramatic camber angles, leaving the 225-treadwidth Nankangs holding on by the skin of their rubber teeth. 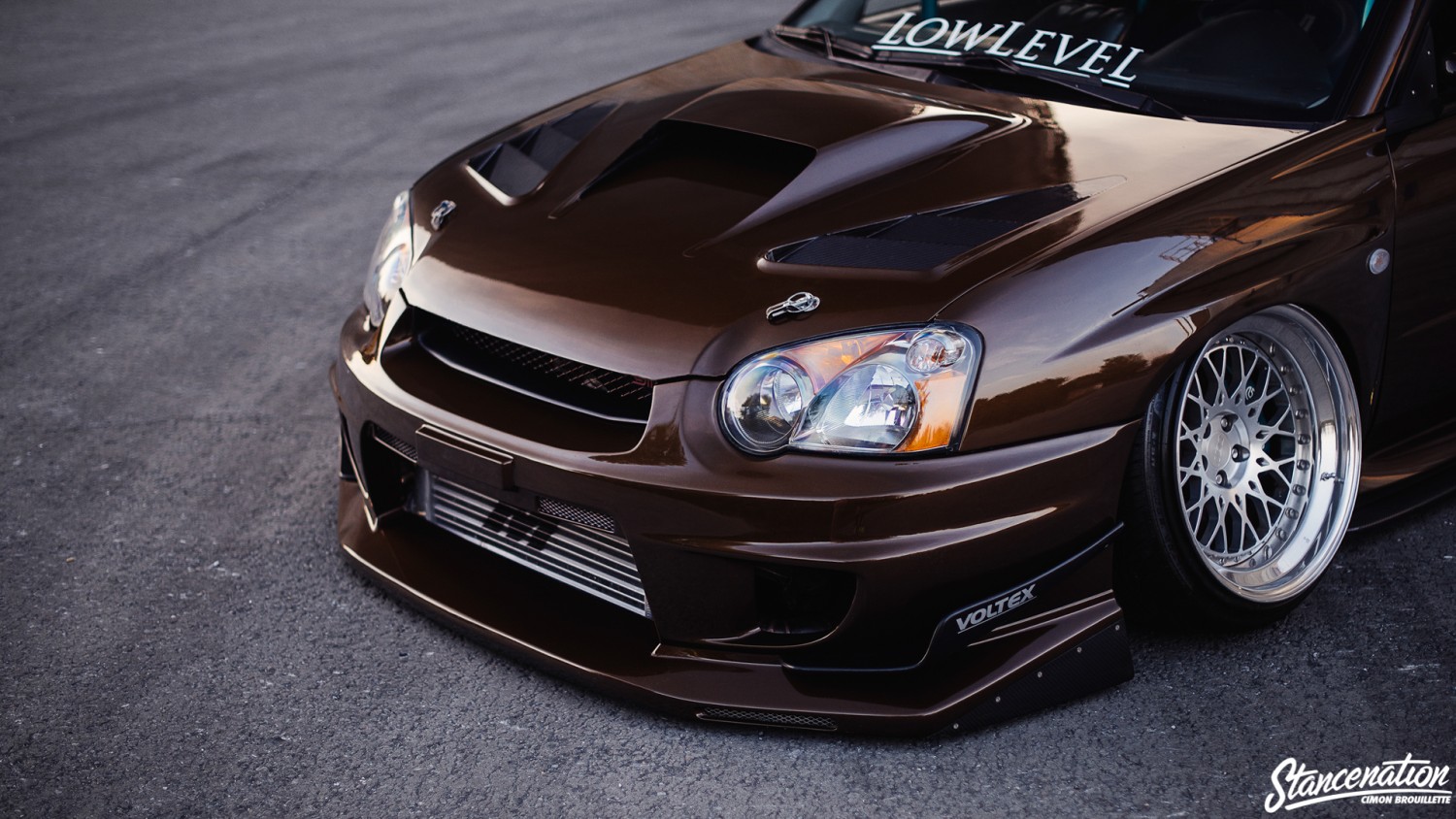 The Subaru EJ25 is available in many variations now, however each version of the 2.5L horizontally-opposed four offers impressive potential. Villiard’s STi was blessed with the powerful engine originally pressurized by a responsive IHI compressor. Of course there is always the push for more. Unfortunately, the meticulous build process shit the proverbial bed in the 11th hour when the engine failed on the dyno during pump-gas tuning. Not one to accept defeat, Villiard took a trip back to Manley Performance in New York. Louis-Phillipe was pleasantly surprised when Manley not only replaced the failed parts under warranty – they went even further than originally intended. Manley rods and pistons, late-model STi crankshaft, and Crower cams accept and flow gobs of fuel and atmosphere supplied through the Cosworth manifold by the Garrett GT3582R turbocharger and Deatschwerks fuel system. The final product tuned via COBB Accessport yielded impressive numbers (440awhp on pump gas/673awhp on race gas) and a very pleased owner. 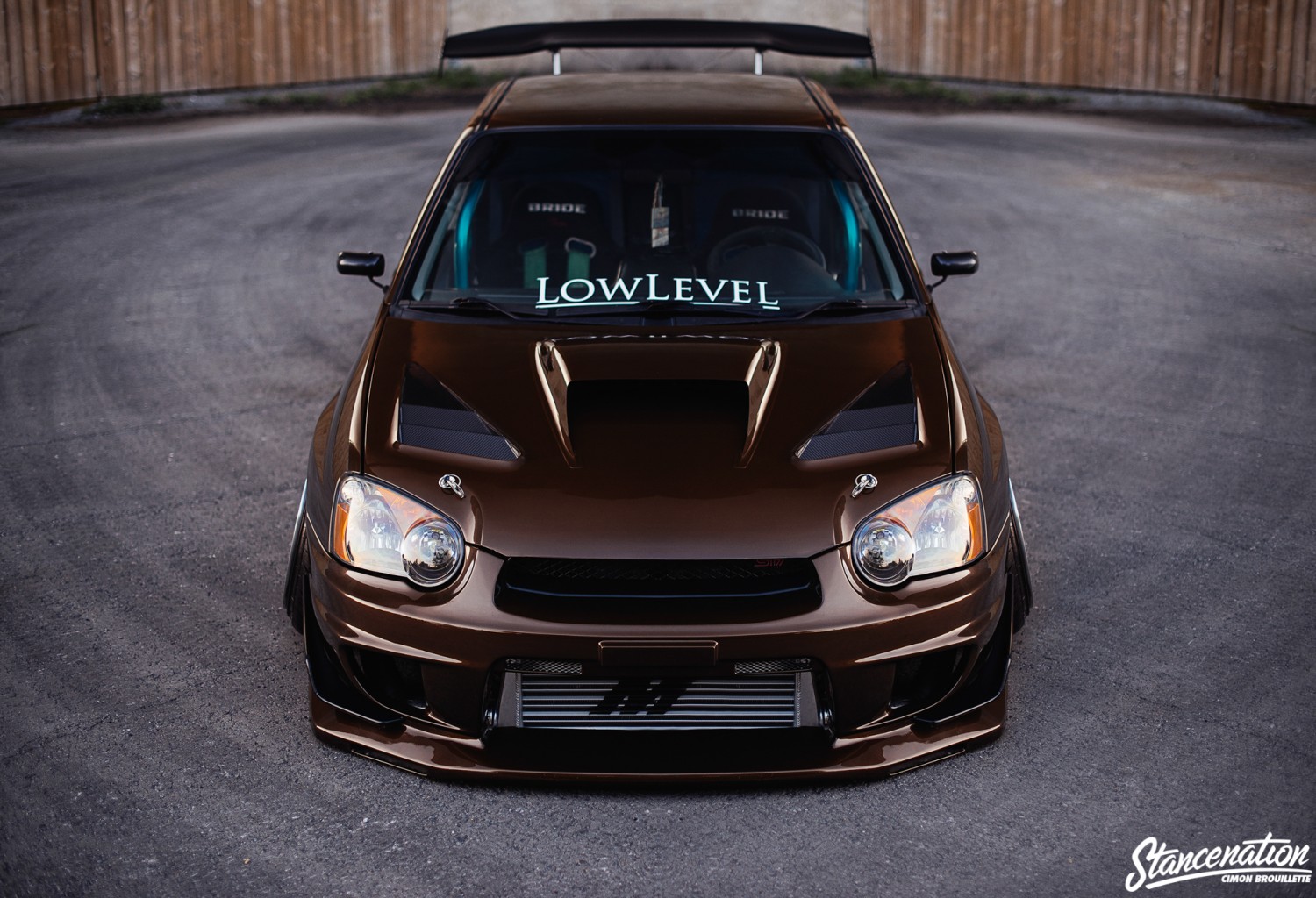 For just about everyone the first car is only the beginning of a certified plethora of firsts. The first car is what you learn with, succeed with, and make mistakes with. Villiard’s first car has evolved into the first culmination of his dreams; it has shown him the first heartbreak of a blown engine along with the first smile after cracking open the throttle. You never forget your first, and Villiard hasn’t even given it the thought – he excitedly reminds us that no car is ever truly finished hinting at much more to come from his STi. With a start like this, one can only imagine what the future holds. 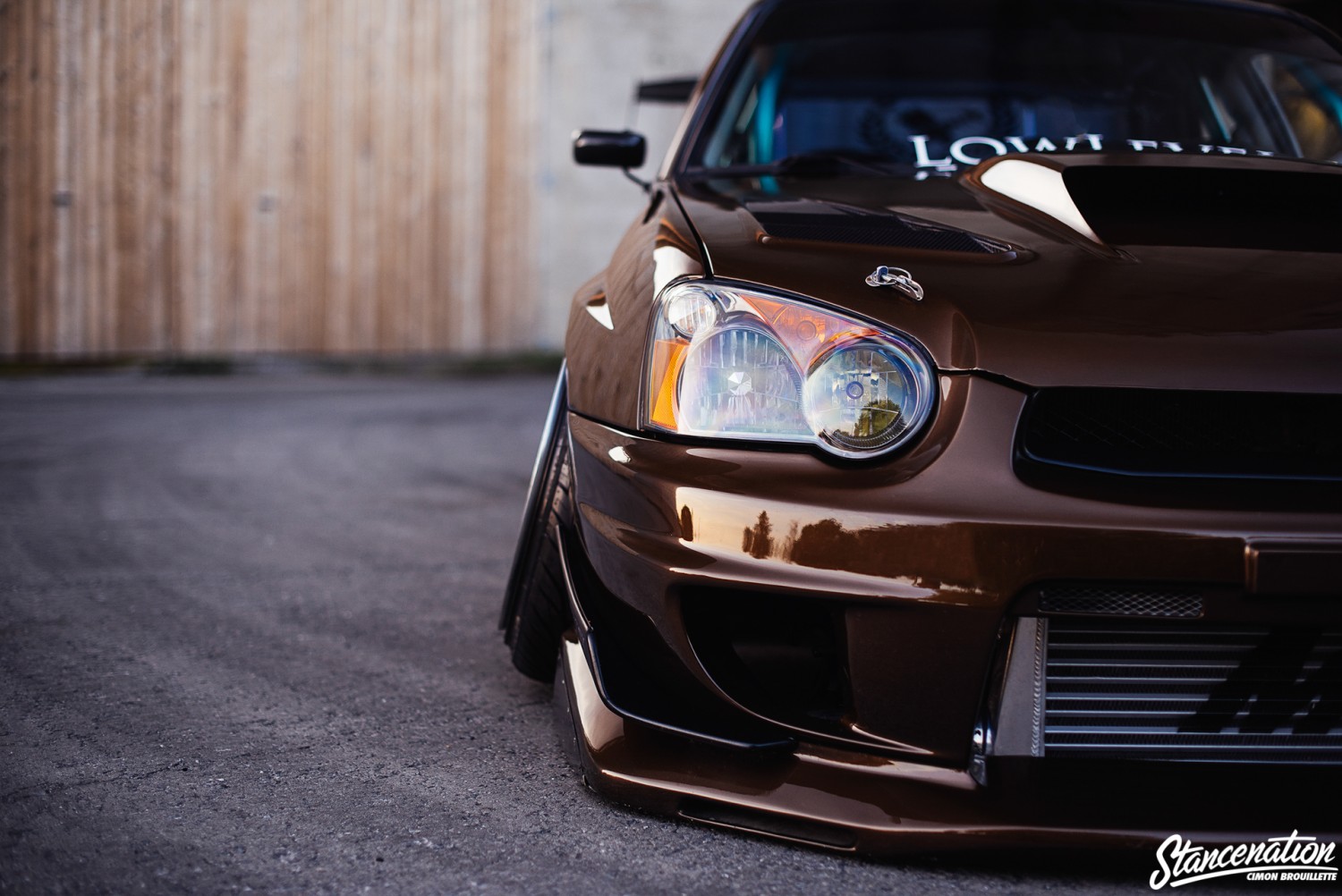 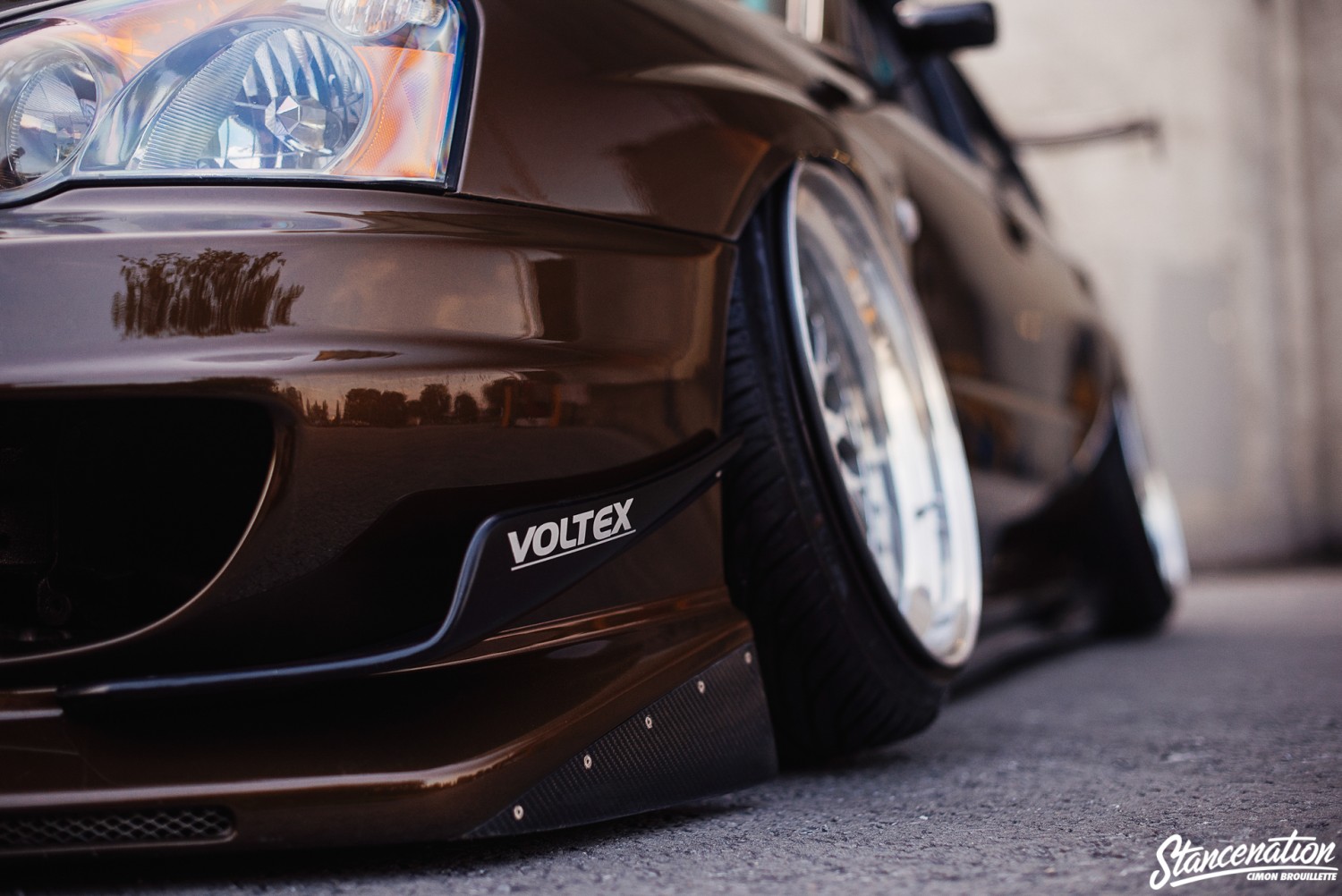 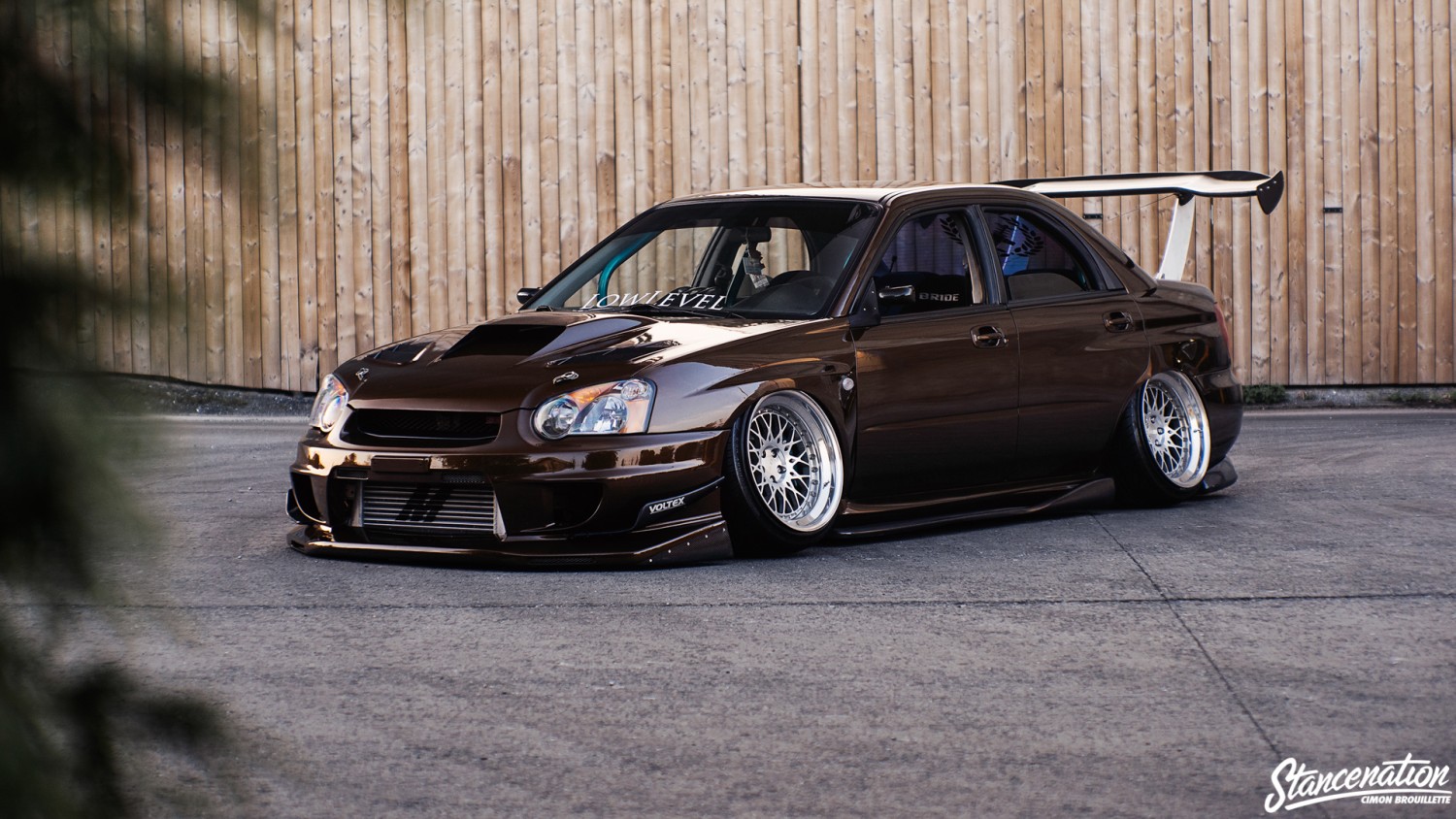 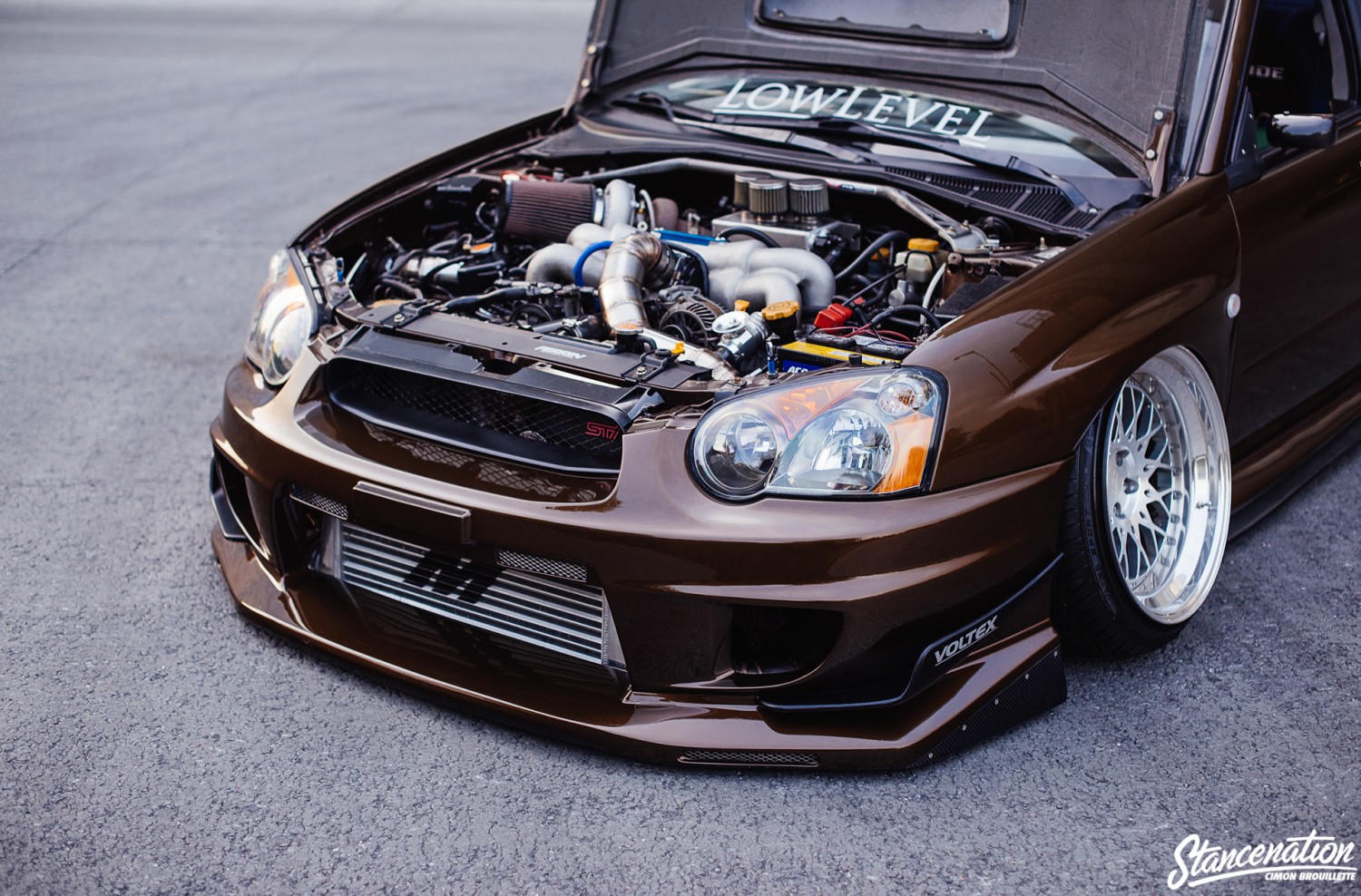 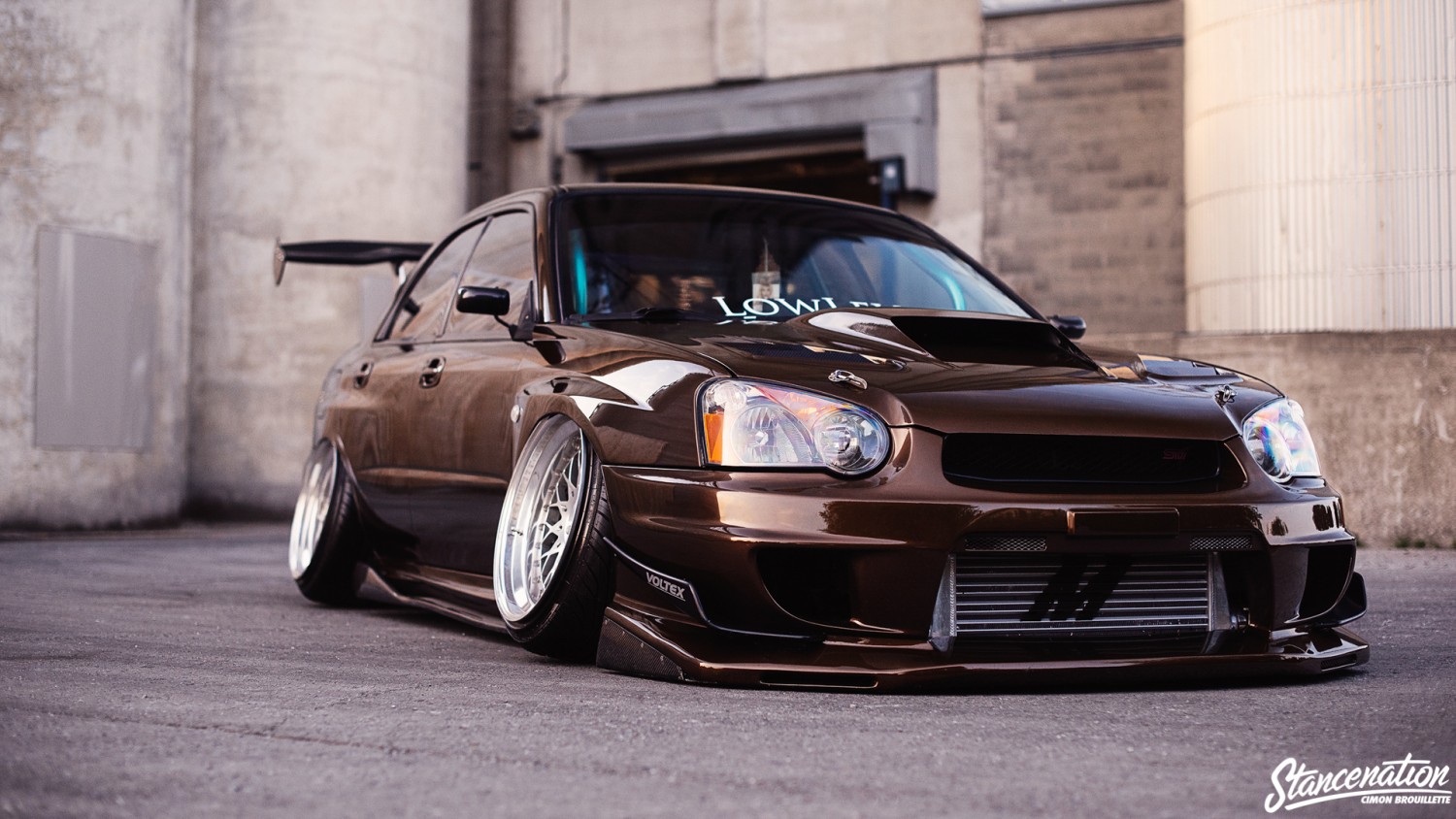 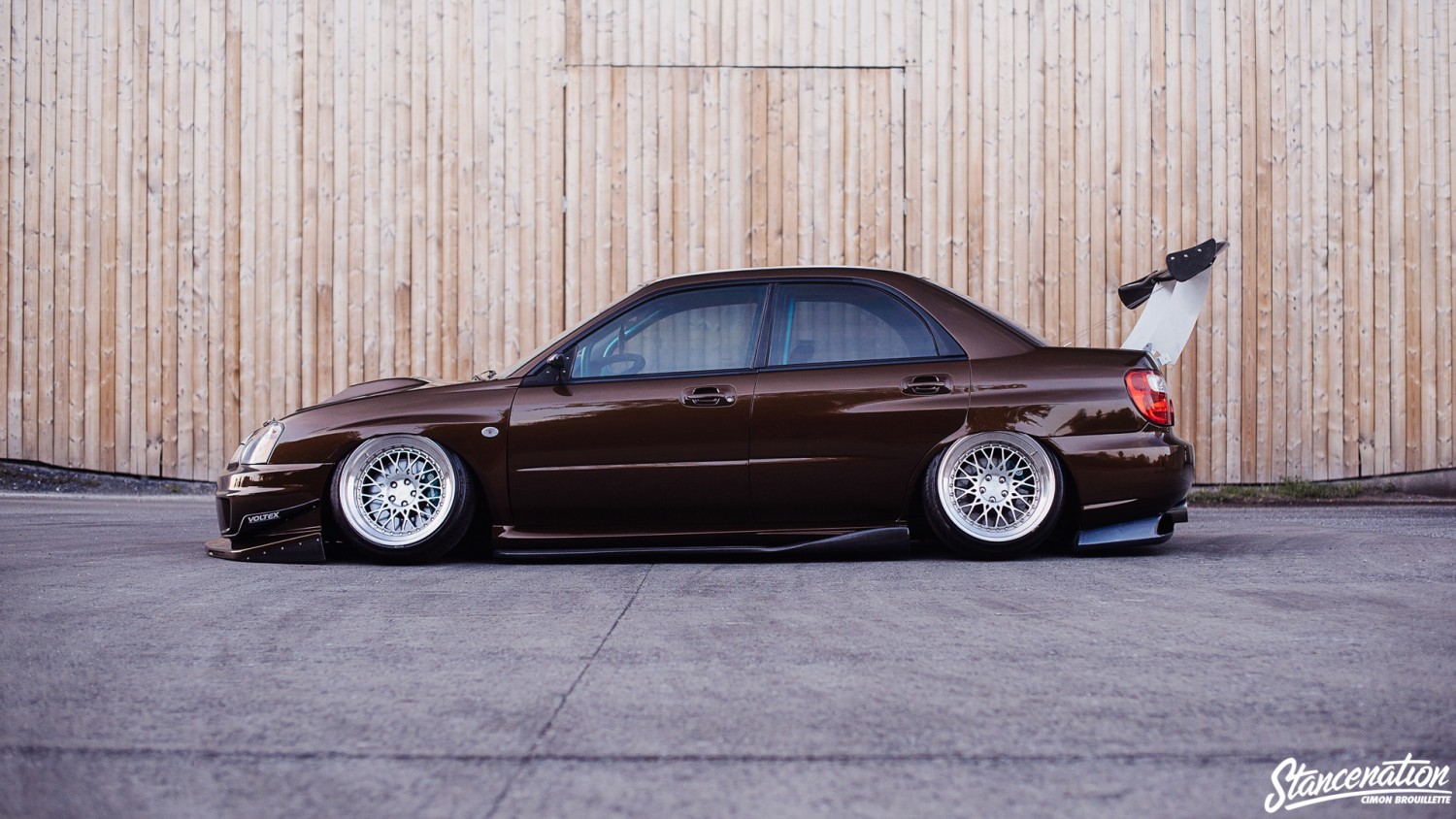 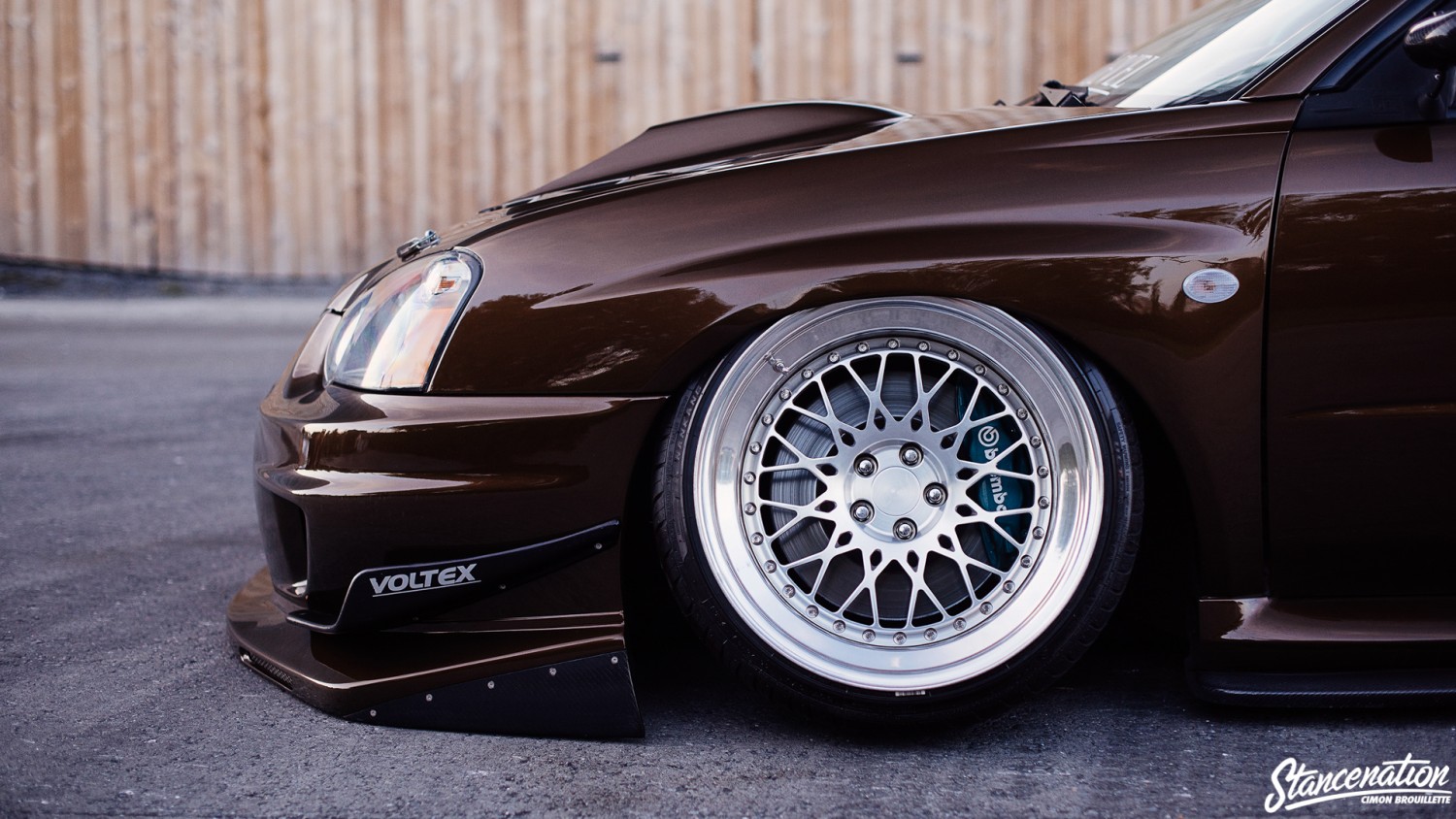 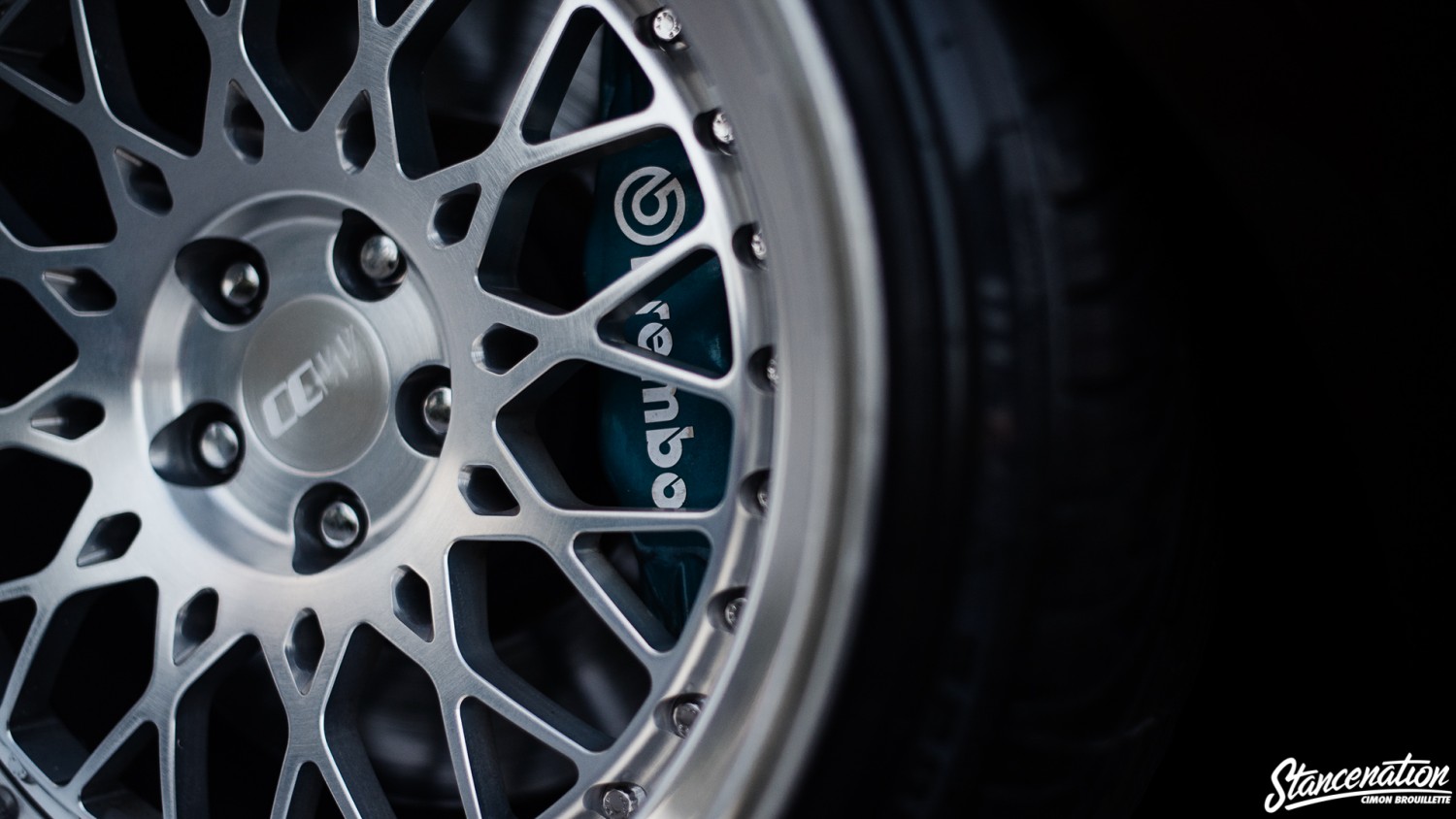 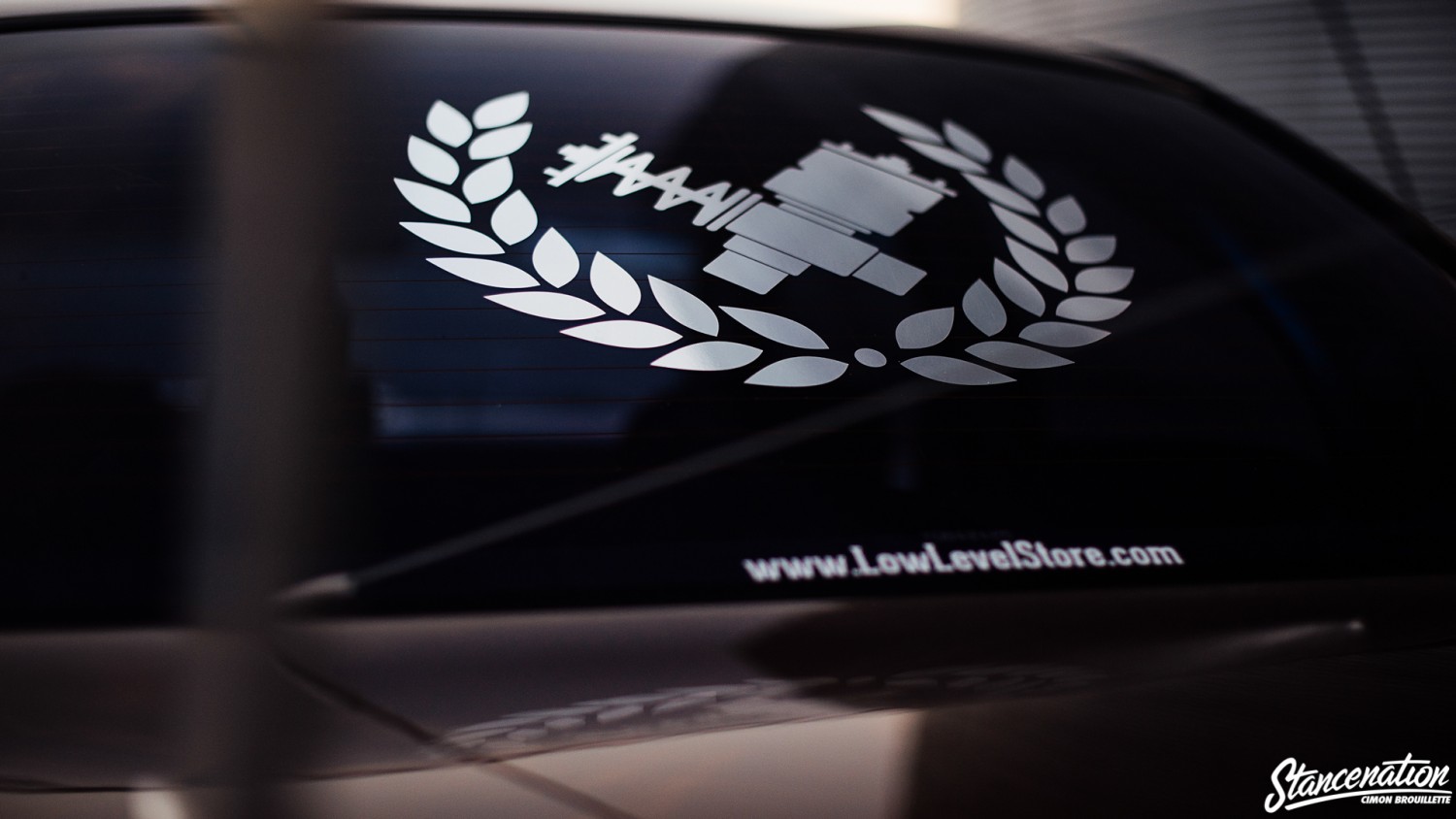