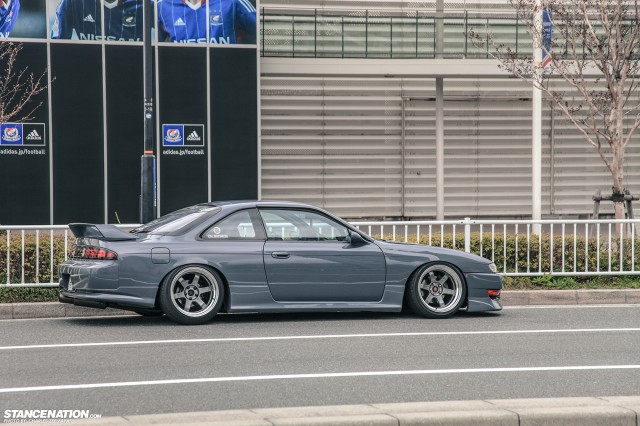 The Nissan Silvia has certainly slid its way into becoming one of the most popular cars in today’s car scene.  Like the Honda Civic, the Silvia boasts a cheap entry price and loads of customizing options.  The fact that it’s rear-wheel drive and comes from the factory with a 2.0L, turbocharged engine (at least in Japan) is another reason for the sporty coupes popularity.  With so many examples out there it can be quite the challenge to stand apart from the crowd.  Yokohama, Japan resident Shun Saito was up for that challenge though, and today we have his incredibly clean S14 Silvia to share with you. 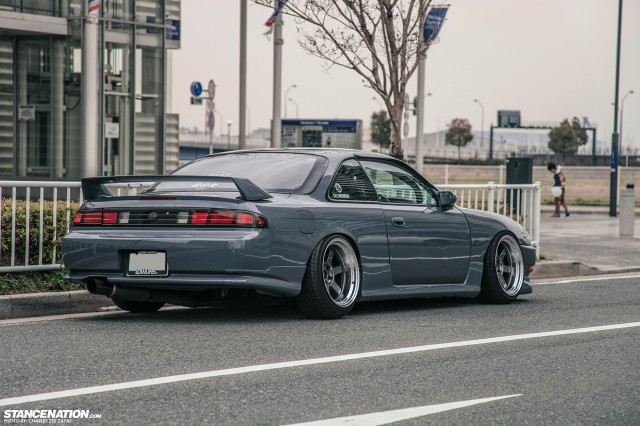 It’s almost a rarity in today’s scene to see a Silvia that isn’t smashed up and painted a multitude of colors.  “Missile” cars suck big-time (at least that’s my opinion) and are one of the reasons why it’s so hard to find clean examples of Silvias anywhere.  I understand that drift cars get used and abused, but it’s totally different to run around and flaunt a beat-up car like it’s something other than a beat-up car.  Luckily for us, Saito-san has kept his S14 in a pretty good condition, and is certainly a car worth featuring here on S:N. 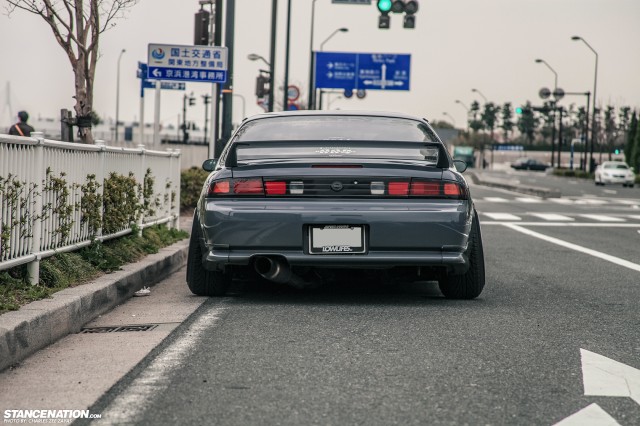 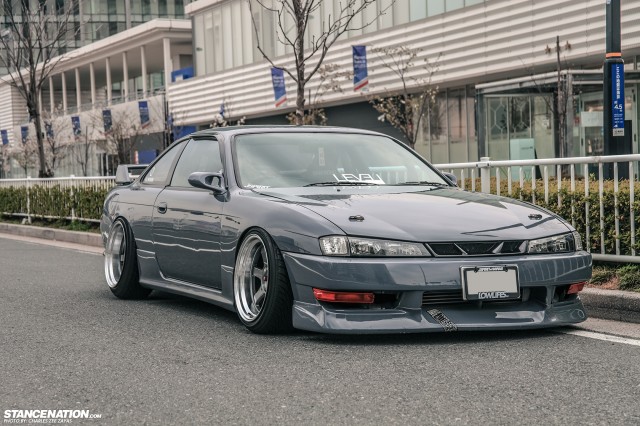 Saito-san has owned his S14 for close to two years and it’s pretty obvious from the wonderful photos that he has been pretty busy with it.  Clean is an understatement, and the car has an almost classic look to it.  It doesn’t sport any wild aero, giant spoilers, crazy paint or graphics, or a wild set of wheels.  The car is simple, understated, yet it still looks oh-so good. 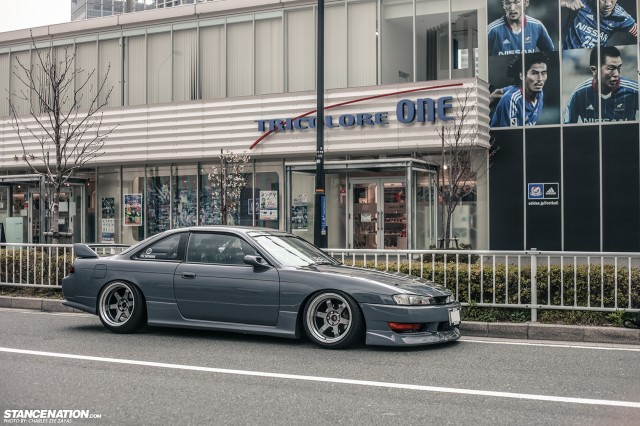 Saito-san’s S14 is adorned with a few choice exterior mods that keep things subtle, yet play well with the car’s stock, aggressive lines.  The kouki S14 looks pretty good from the factory so you don’t really need to go crazy on the exterior with body kits and the like.  Maybe this is why Saito-san’s S14 stands out to me?  It’s rare to see a nearly stock-bodied S14 these days.  This S14 wears body-armor from C-West which has a reputation for clean, track-inspired aero pieces.  Saito-san also deleted the fog lights and swapped out the JDM tail lights for USDM tail lights.  With the fresh body mods laid down, it was time to load the spray-gun.  For the paint, Saito-san chose Nissan’s Gun Metallic Grey from the Nissan Cube, and it looks amazing on his S14.  Grey is always a hit-or-miss color for me since it’s a neutral color, but it works really well here with this S14. 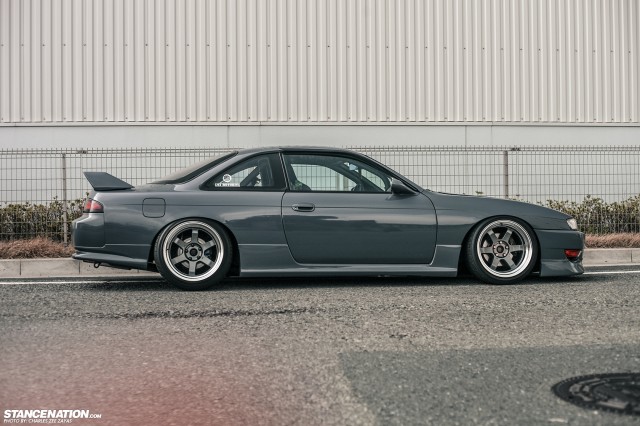 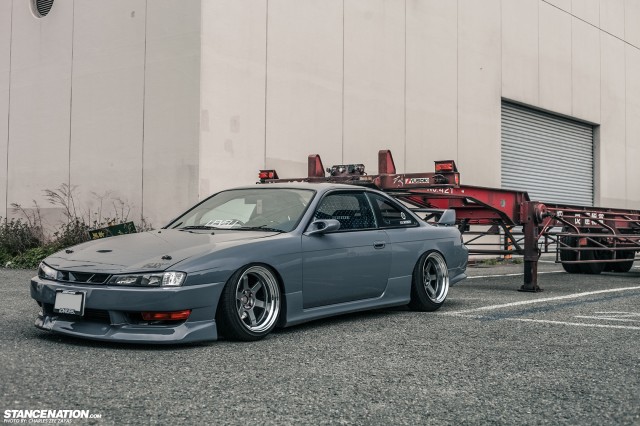 For his wheel choice, Saito-san went with something equally as classic and subtle as his S14.  Volk TE37 are certainly an iconic wheel, and I’m glad Rays is continually “reinventing” the wheel, so-to-speak.  The TE37Vs look right at home on Saito-san’s S14, and the deep, step-lipped design is just so delicious.  Great fitment is pretty much a standard now when it comes to Silvias, and this S14 certainly doesn’t disappoint.  These TE37Vs are sized up at 17×9.5 -15 in the front and 17×10 -20 in the rear, and combined with the copious amounts of camber front and rear tuck nicely under the arches.  Simple, classic, beautiful. 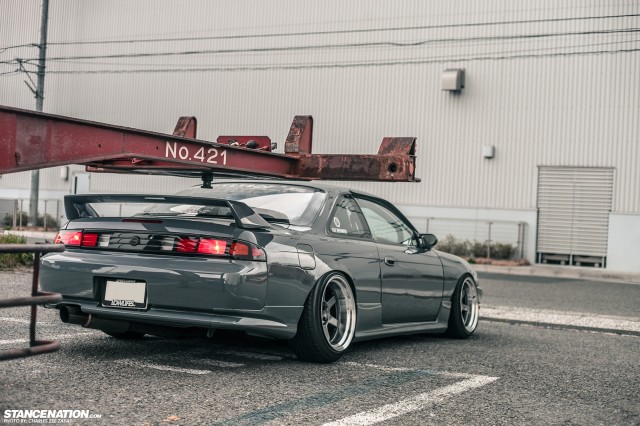 With the wheel choice completed, Saito-san turned his attention to the suspension.  For his Silvia, he turned to the maestros at Kunny’z and is running their Racing Gear dampers.  For those not in the know, Kunny’z is pretty much synonymous when it comes to drifting in Japan.  Saito-san is also an avid drifter so he puts these dampers to the test personally, and not only do they perform well, but they also help his car achieve, and maintain, that awesome stance.  To further fine-tune his suspension, Saito-san added adjustable toe arms and upper control to the mix. 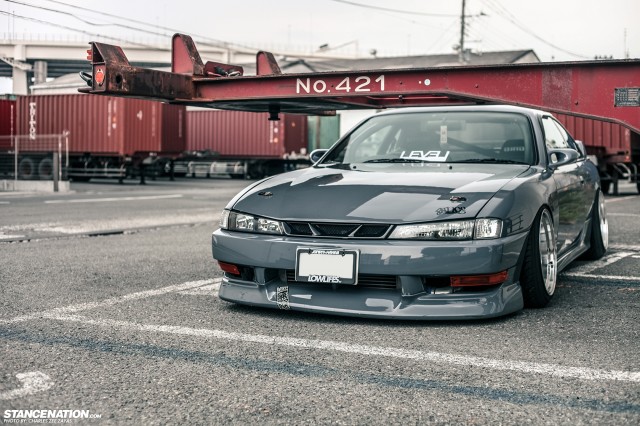 Despite the Silvias in Japan coming with the option of a turbocharged, 2.0L SR20DET motor, a stock SR wasn’t going to cut it for our man here.  Saito-san’s S14 isn’t just about a killer stance and nice set of wheels, he’s worked over the SR fairly well too.  At the heart of it all is a HKS GT-RS turbo kit and exhaust manifold which feed compressed air through a Greddy intercooler before meeting entering the SR.  A quartet of Tomei 740cc fuel injectors feed the thirsty 2.0L, and combined with HKS 264 camshafts (both intake and exhaust), and an HKS F-Con V-Pro controlling everything, this S14 is conservatively at 300hp.  On the inside, things are all business.  An 8-point roll-cage dominates the interior along with a pair of Bride Zeta3 seats.  A Momo Drift 330mm steering wheel provides Saito-san’s input, and a STACK instrument cluster replaces the factory unit.  STACK units are extremely trick, and add a very race-car touch to any interior. 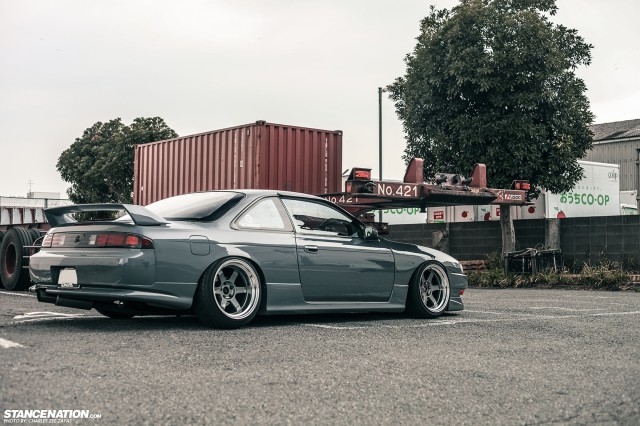 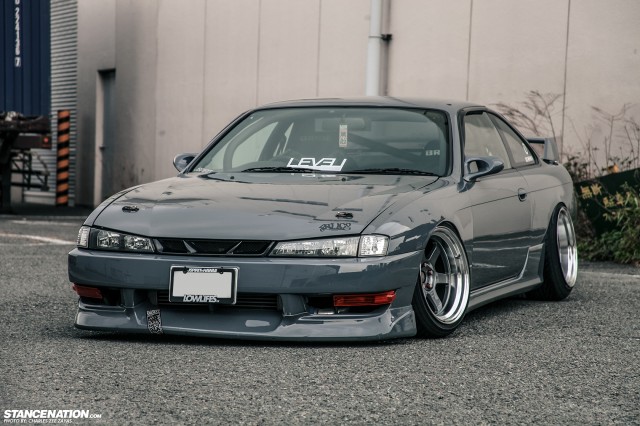 So with everything laid out bare, can everyone please take note?  This is how it’s done.  No flashy aero, no mis-matched body panels, no smashed up bumpers and fenders, a proper set of wheels, and complete motor and interior to match the aggressive looks.  Saito-san kept things clean and simple, and he’s caught the eye of a lot of people, because there is no denying that this looks damn good.  With so many Silvias and 240sxs being wrecked (literally and figuratively), it really is comforting to see Saito-san’s car in such impeccable shape.  I can only hope this article will help influence others to keep things clean while still pushing the limits.  Don’t say it can’t be done because you’re looking at the proof right here.  Enjoy a few more photos, and feel free to share your thoughts below. 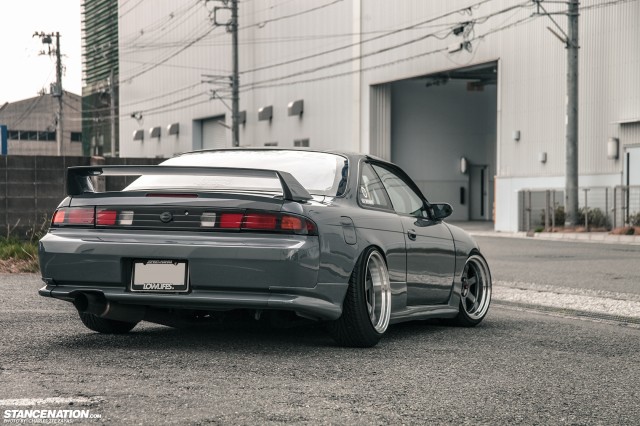 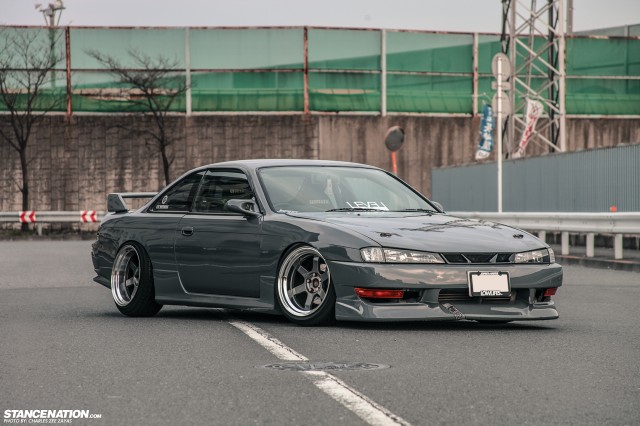 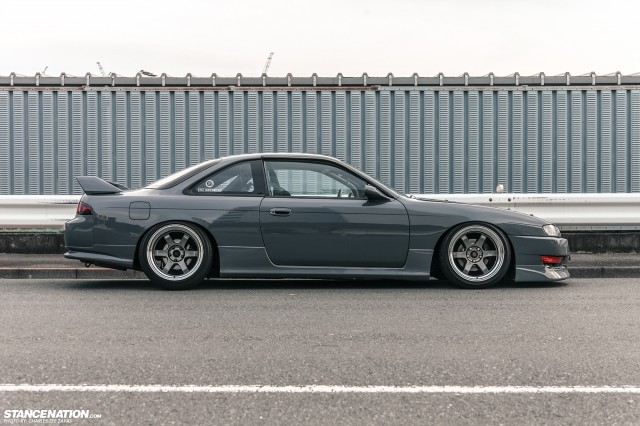 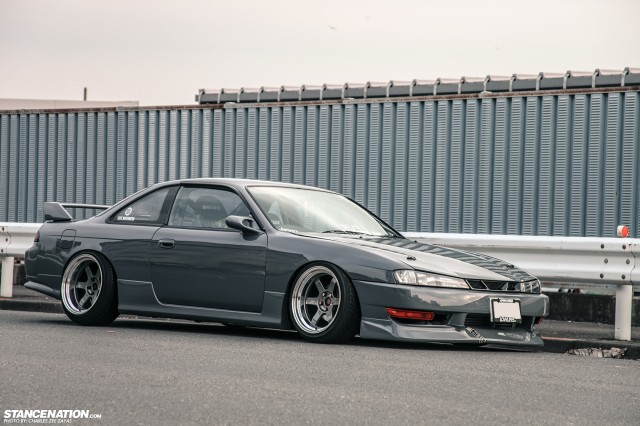 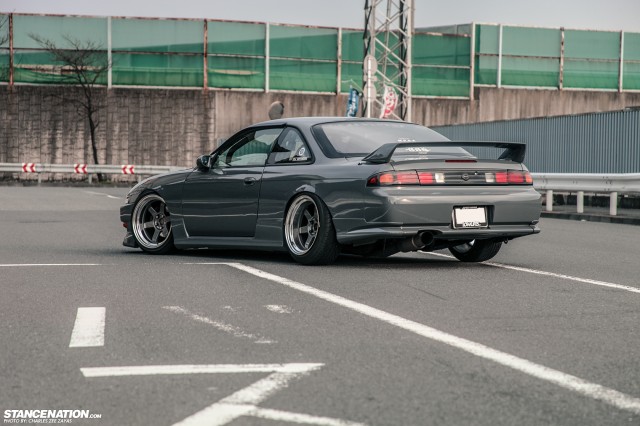 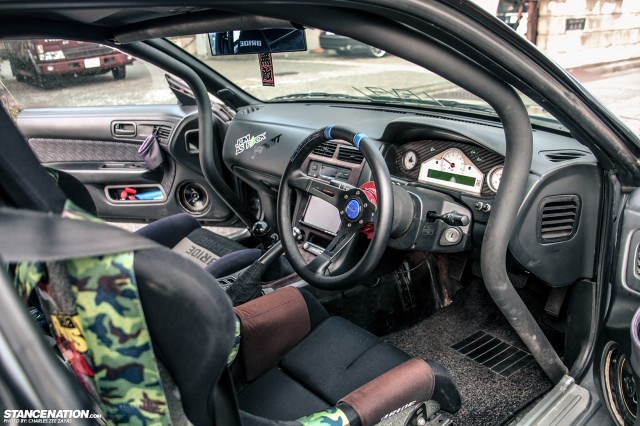