When I decided to follow through with this feature I honestly wasn’t sure if I wanted to drop two similar cars from the same marque back to back on the site, but with the level of quality that they both share it was difficult to say no. These luxury gliders are both adorned with the Mercedes badge, ride on air suspension, and sport gorgeous rollers, yet they both differ greatly in terms of styling and overall feel in regards to the way that the owners pieced the projects together. Enough small talk and minute comparative thoughts though, lets give the stage to Denny Putra and his gorgeous E300. 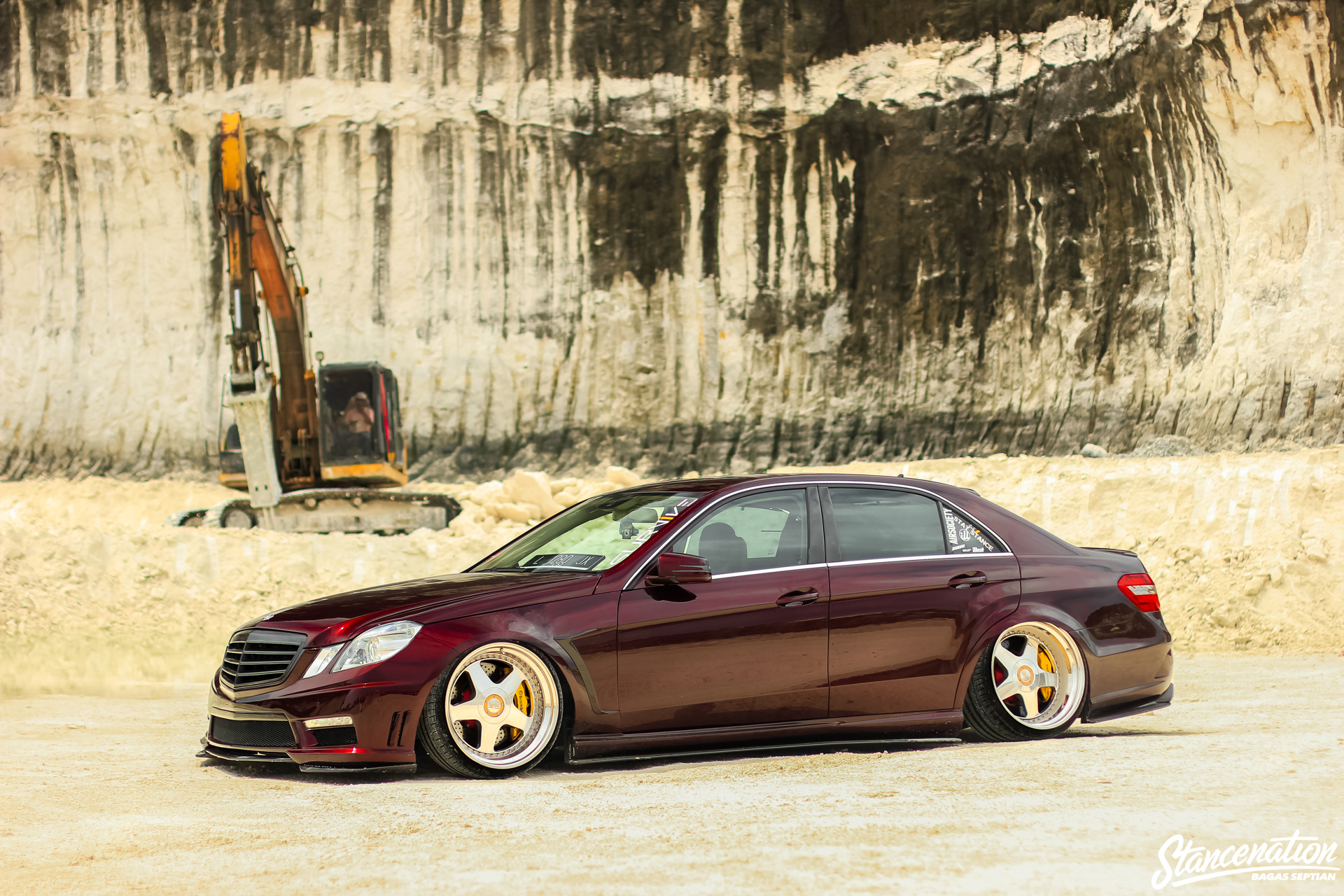 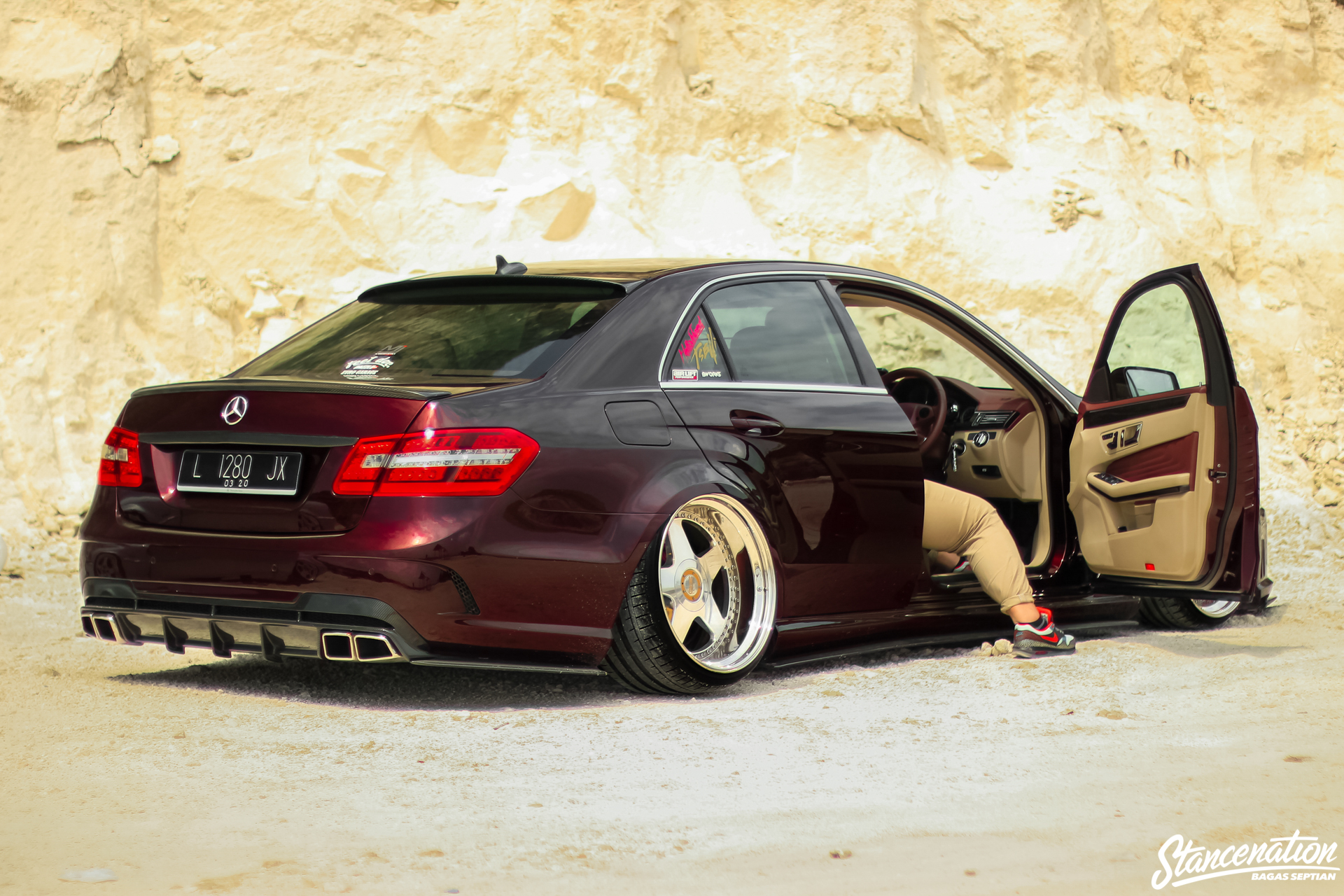 It isn’t anything new to see jaw dropping cars coming out of Indonesia and I feel that although they have a much smaller community than we do here in the States or countries like Japan or the UK they make up for the lack of quantity with outstanding quality. It may sound cliche’, but no truer words could be spoken especially when you first see Mr. Putra’s  Mercedes. I started off the interview just trying to get to know Denny and it was very apparent from the start that he was not one to take any shortcuts or use parts that weren’t top notch. In the span of just over a year he, along with the help of a few friends, have built one of the more proper VIP styled rides that Jakarta has seen in a long time. 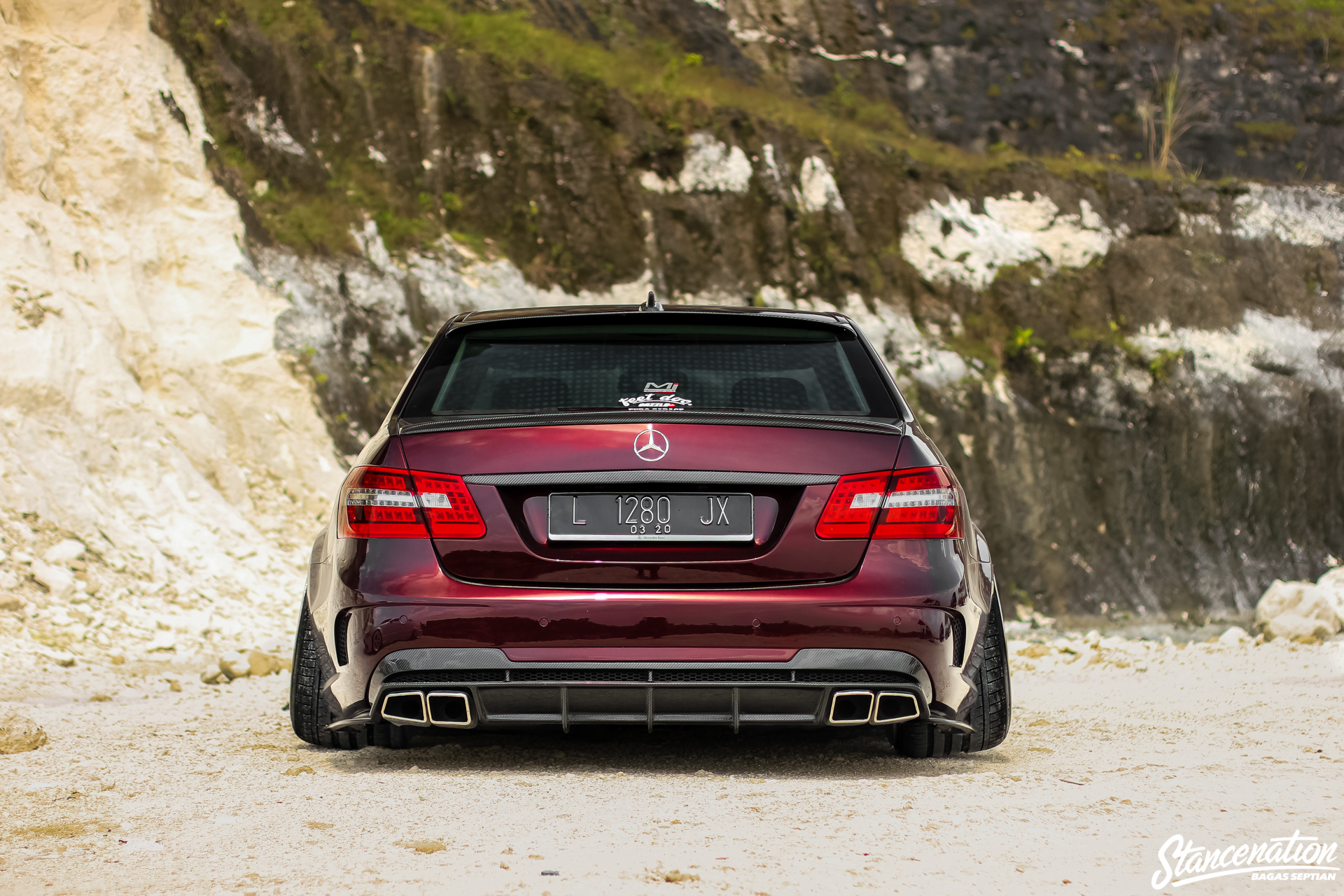 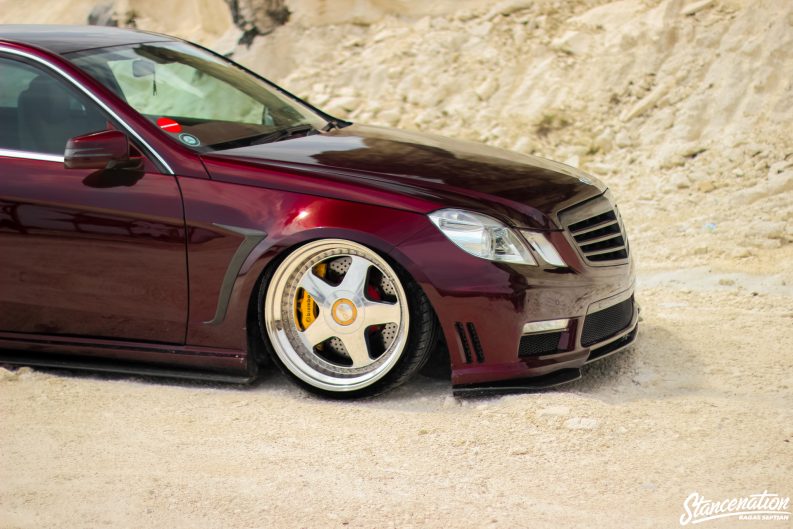 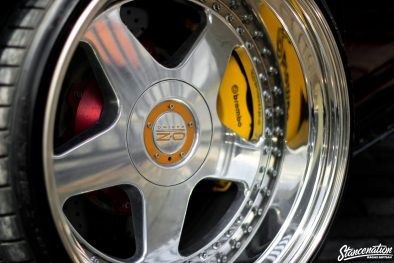 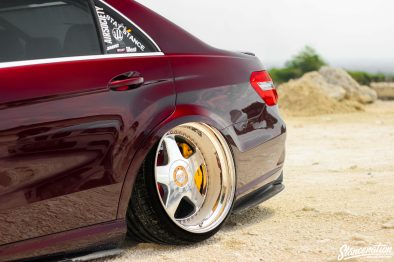 Denny has always enjoyed the classic lines that the Euro cars have to offer along with the visual flair that the VIP guys always seem to add to their creations and his mind was set on blending both styles together for the build. I applaud the man for taking a SawZall to a brand new Benz as it is something few of us would have the balls to do, but the end result makes everything worth while. The custom metal wide-body and radiused arches add aggressive posture to the car all while retaining a crisp, OE look nonetheless.  The front and rear bumpers come from the this car’s bigger brother, the E63 AMG, but have been trimmed and made to fit the wider hips and shoulders of the vehicle seen here. Once all of the body work was sorted and complete a respray was in the works. Most Mercedes’ seen on the highway and even those gracing the grounds at larger shows are going to be your typical Euro sedan blacks, silvers, or whites. A car that has this much going on warranted something out of the ordinary and the Candy Maroon paint really sets the car off. 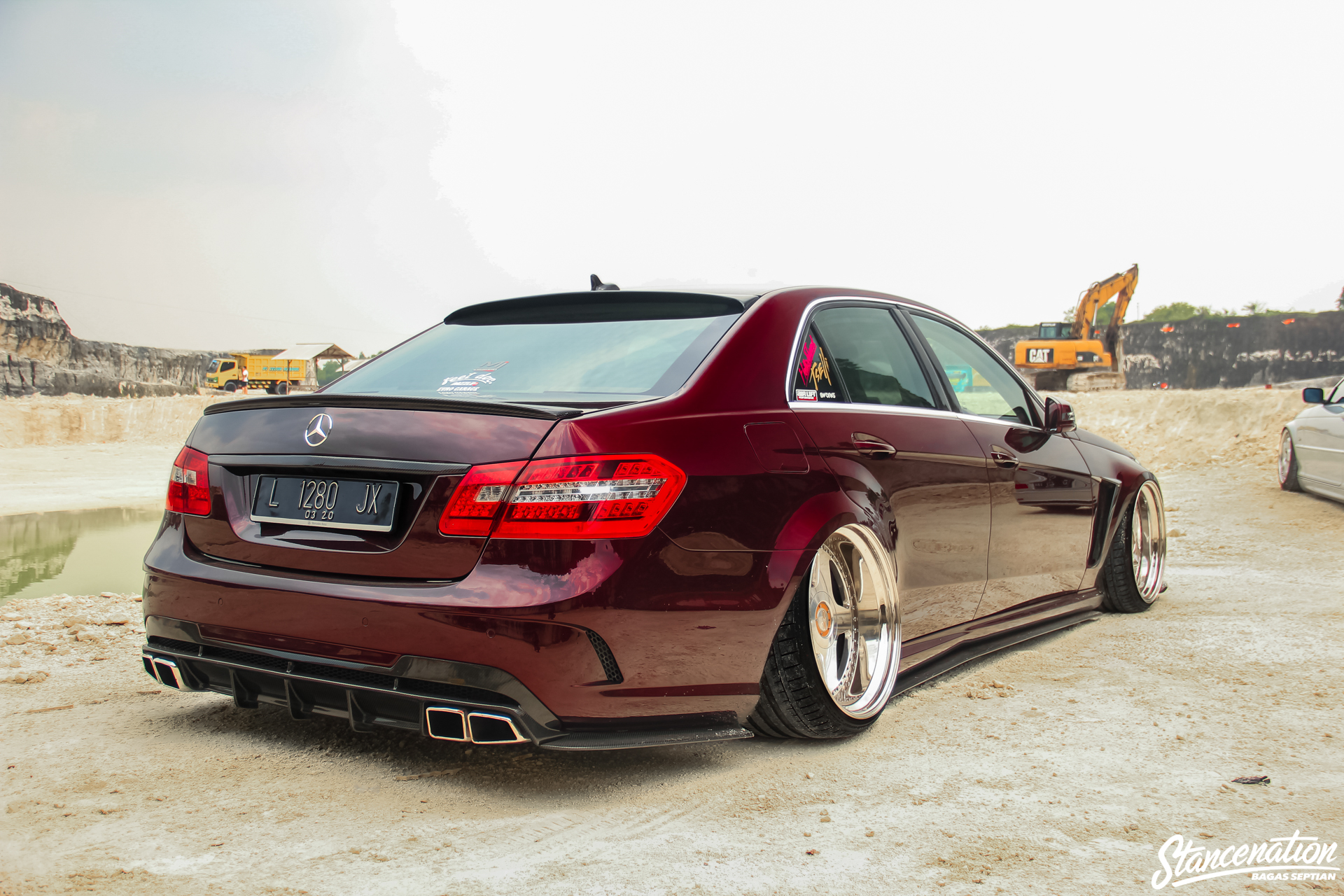 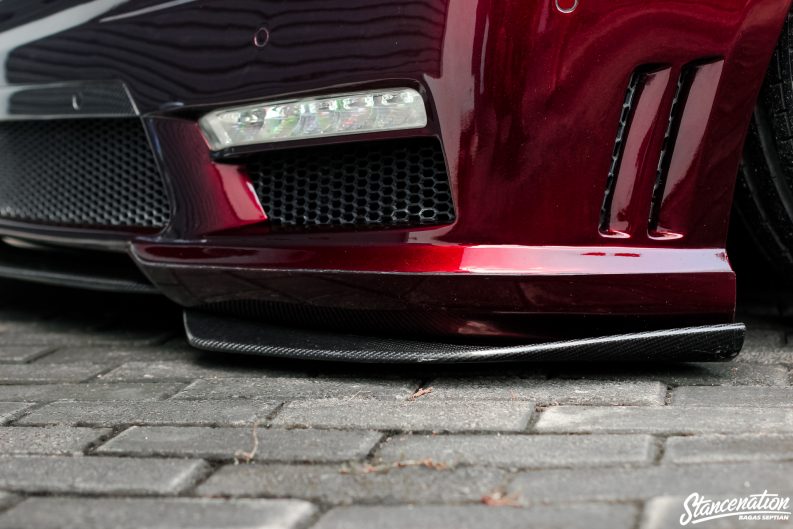 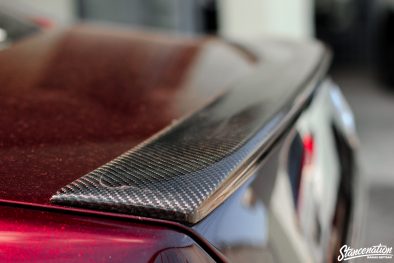 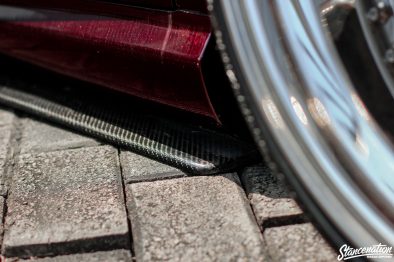 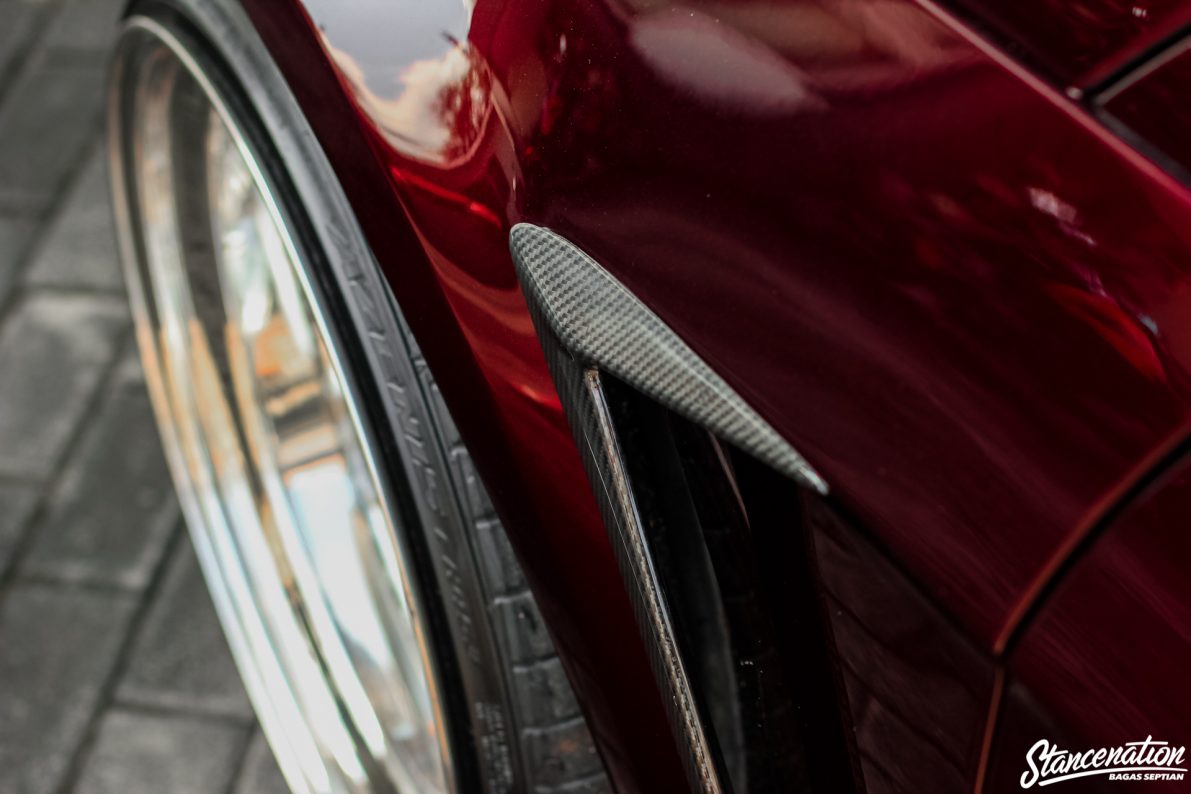 Adding to the in-your-face aesthetic nature of the car are the fully rebuilt and refinished O.Z Futura’s. I am slightly biased being that I am a big fan of rebuilding older wheels from years past and turning them into new works of art to fit a particular project, but it is very hard not to love what Denny has done with the setup here. The Futura is a bonafide classic and being stepped up to 20″ all around looks trick. Air Lift Performance struts and management tackle the task of bringing the arches and lips closer together with the push of a button. Their latest 3P/3H management system which combines pressure and height sensing adjustability ensures that the Radinox hoops don’t kiss Mercedes metal unless the bags are completely empty. 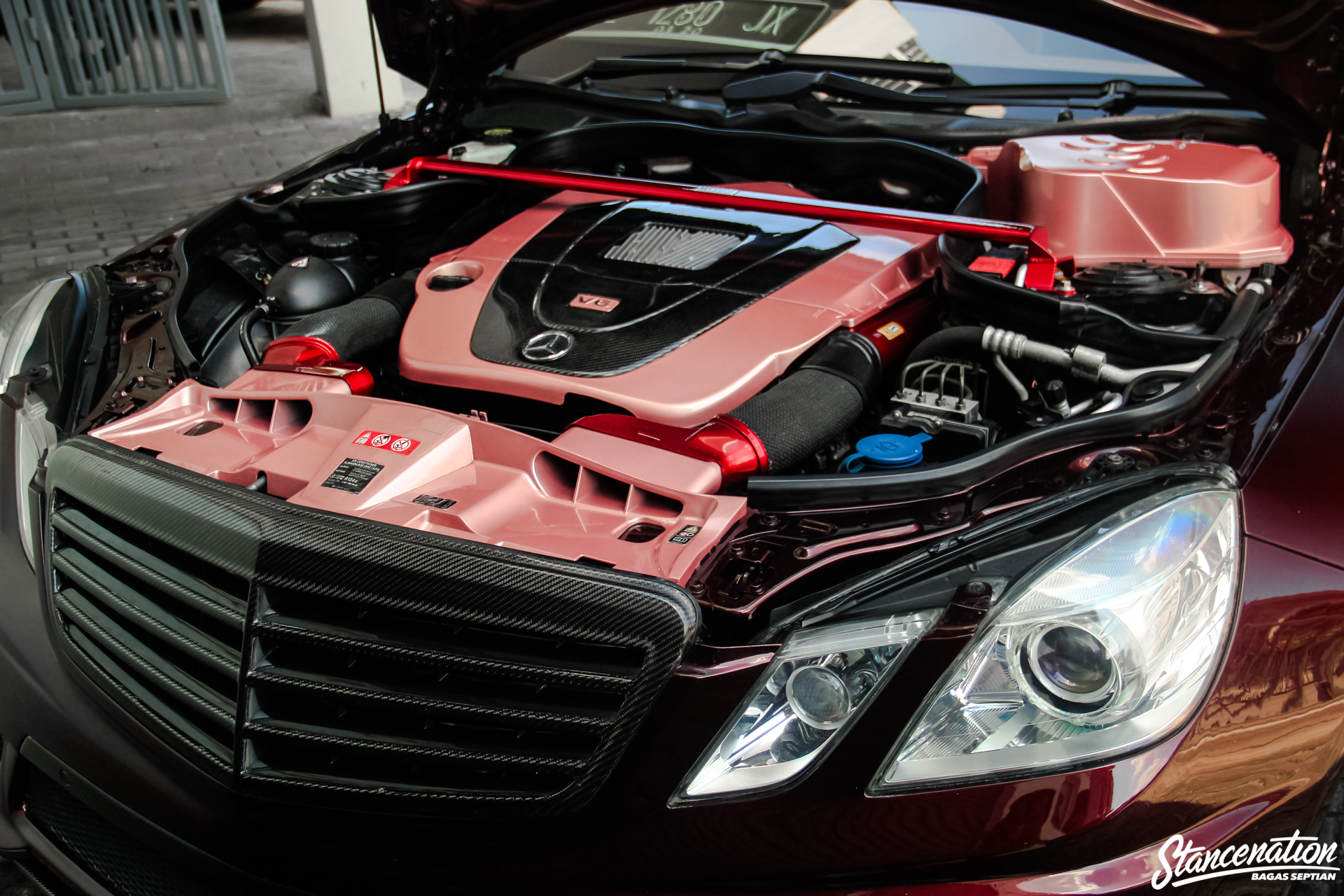 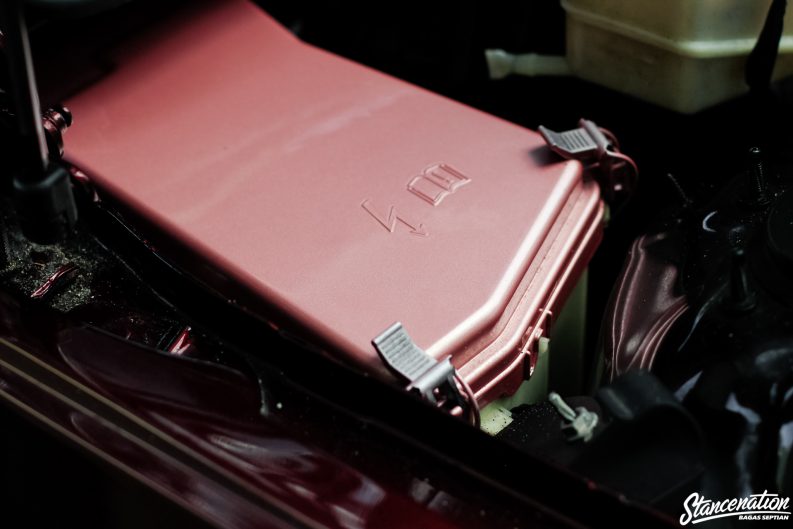 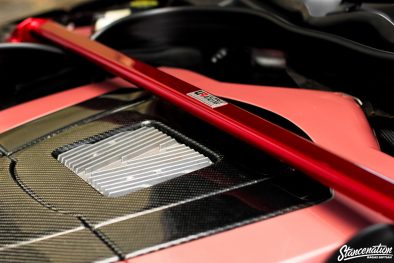 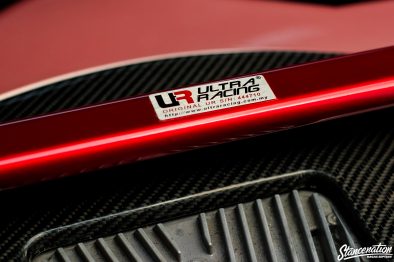 Although Denny’s E300 could have easily landed a feature for the impressive bodywork and fitment alone he followed through with his love for VIP and knocked the trunk, bay and interior out of the park. Bolt on’s and color matched plastics add zest to a usually boring engine bay and the suede wrapped components vibe well with the polished compressors and hard-lines in the boot. The guts of the car have all been well sorted with custom pieces throughout. The seats have been rewrapped and the steering wheel no longer resembles the factory example either. This build is the definition of class, scene research, and dedication to the latter. Understanding how to involve two very different communities that also have the potential of meshing extremely well together if done right. He thought outside the box and took a car that isn’t normally associated with traditional VIP styling and killed it. It’s people like Mr. Putra and his friends that keep the scene evolving and growing on a daily basis and that is what Stance Nation loves to see. Keep it up man. 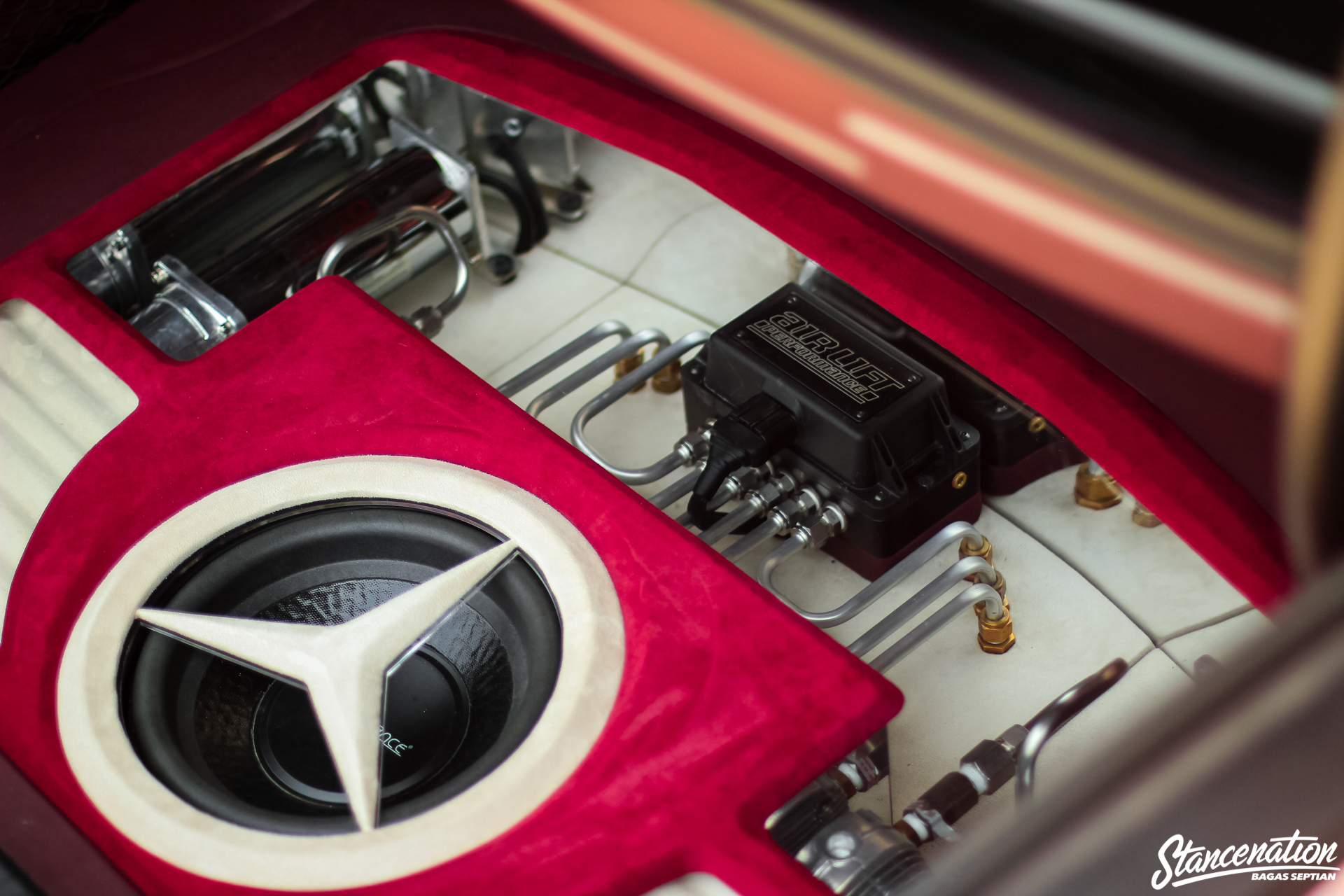 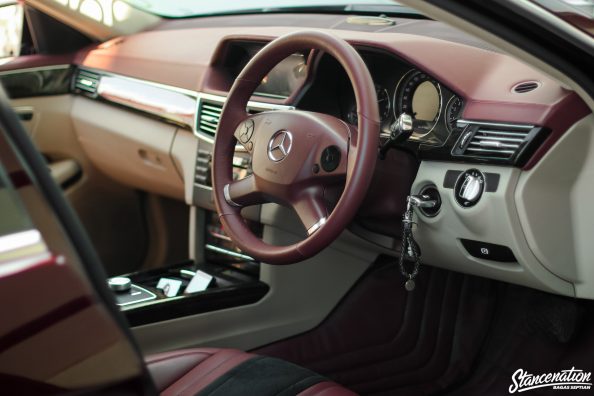 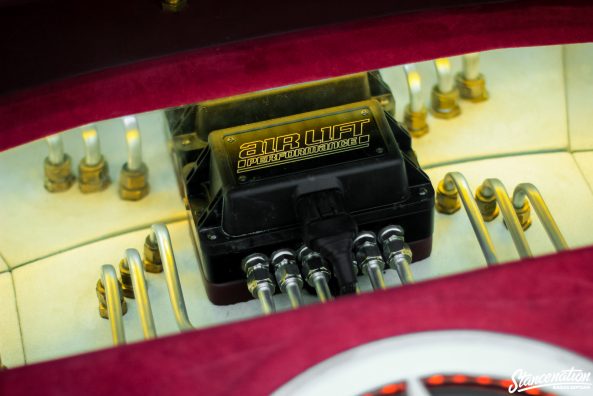 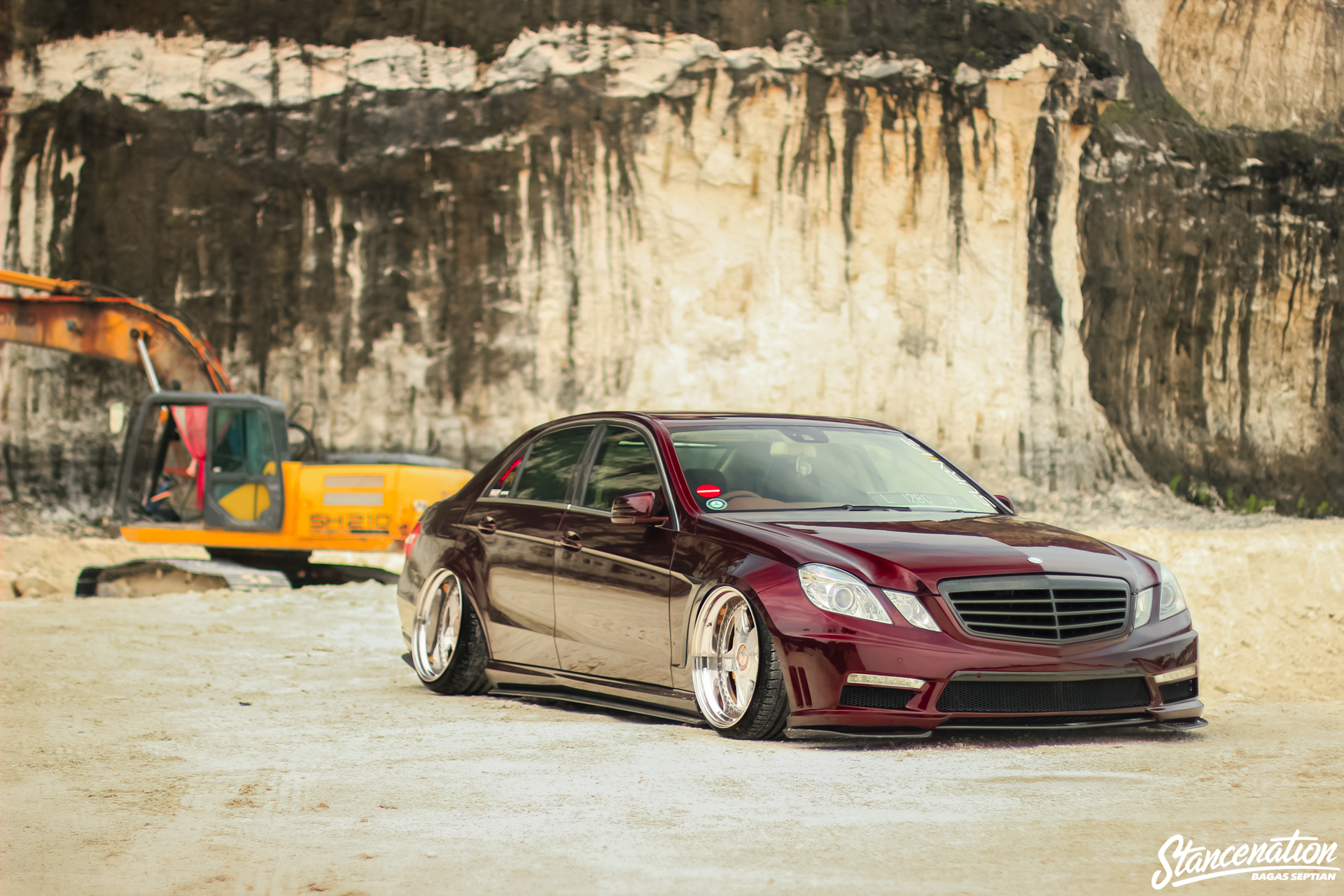 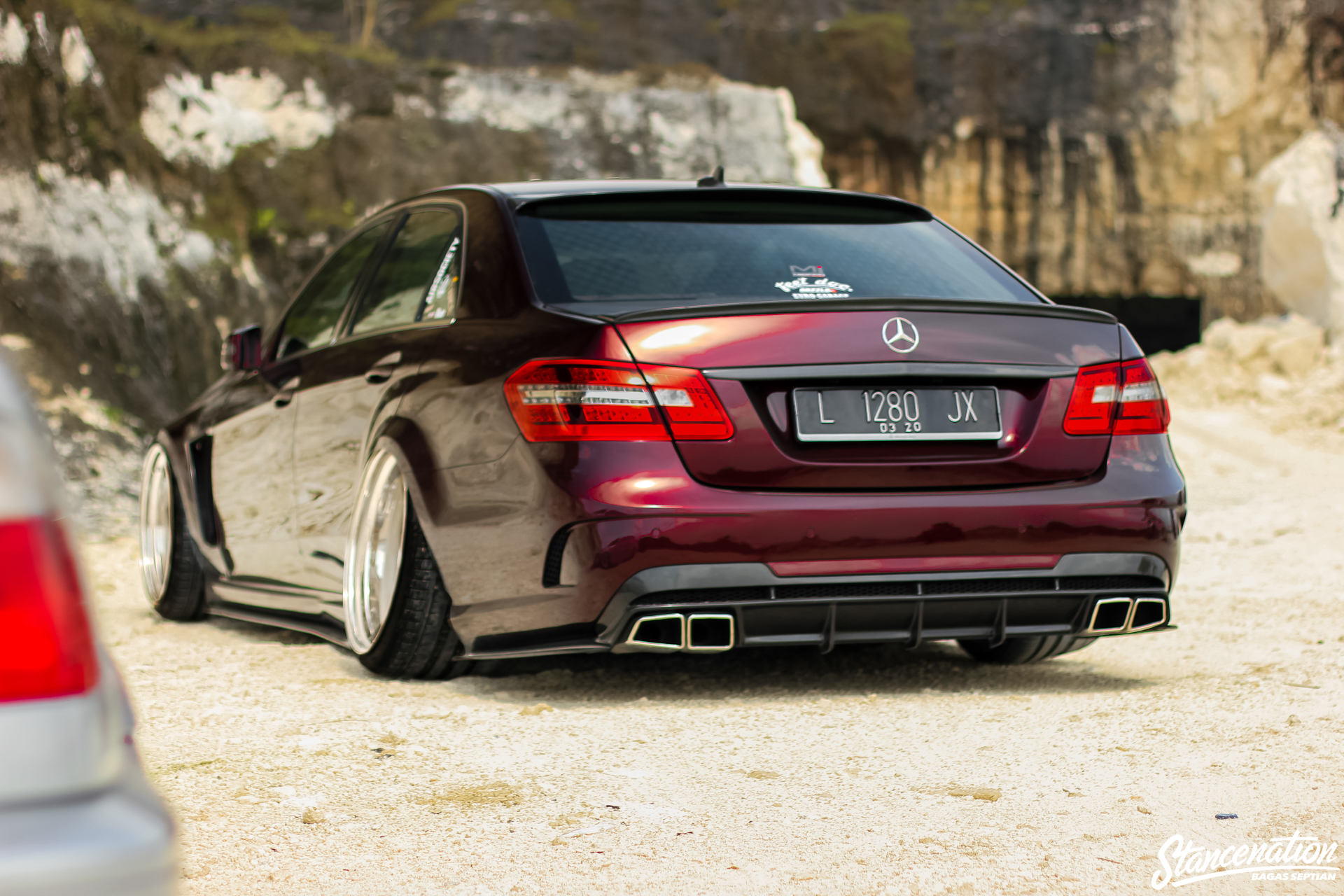 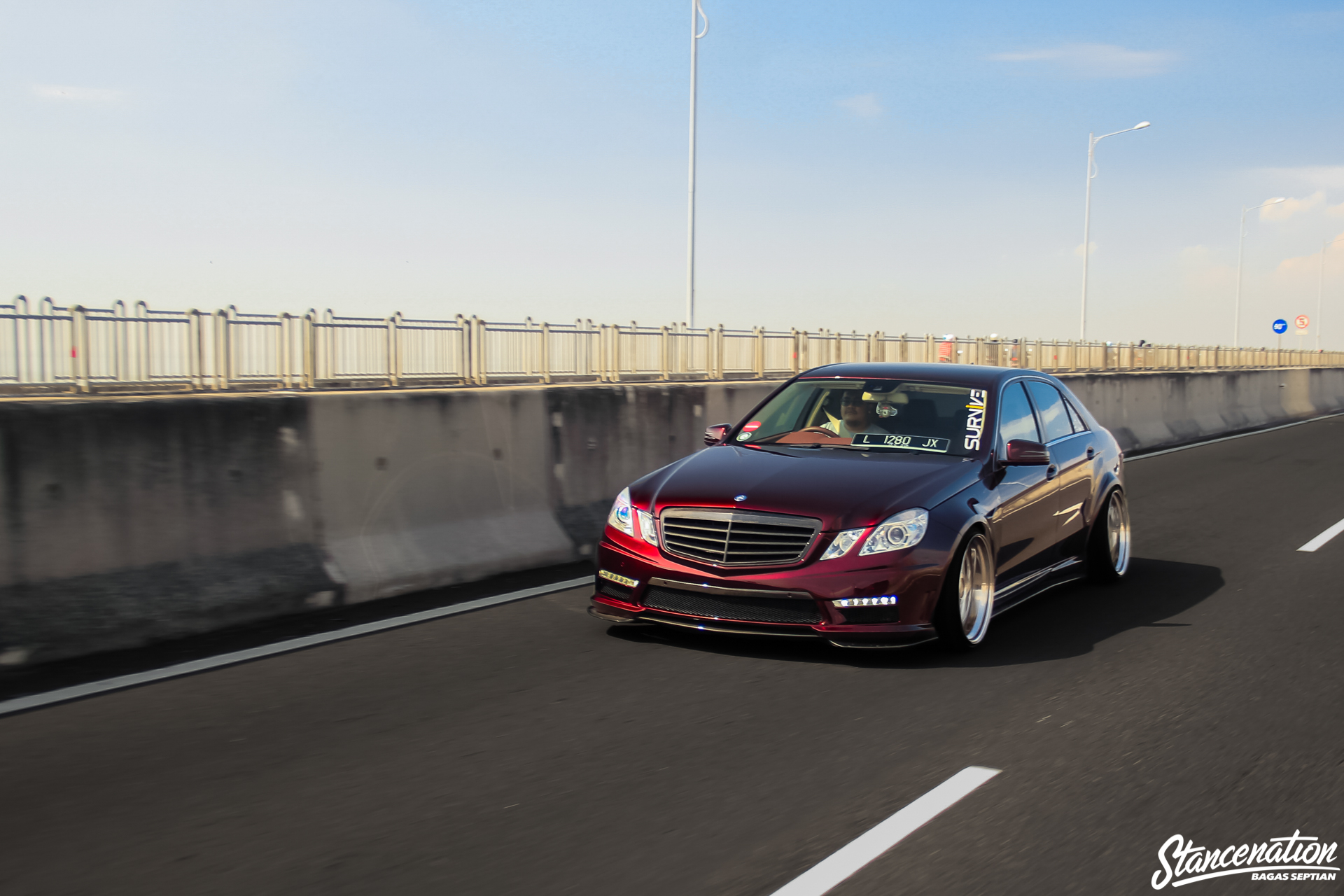