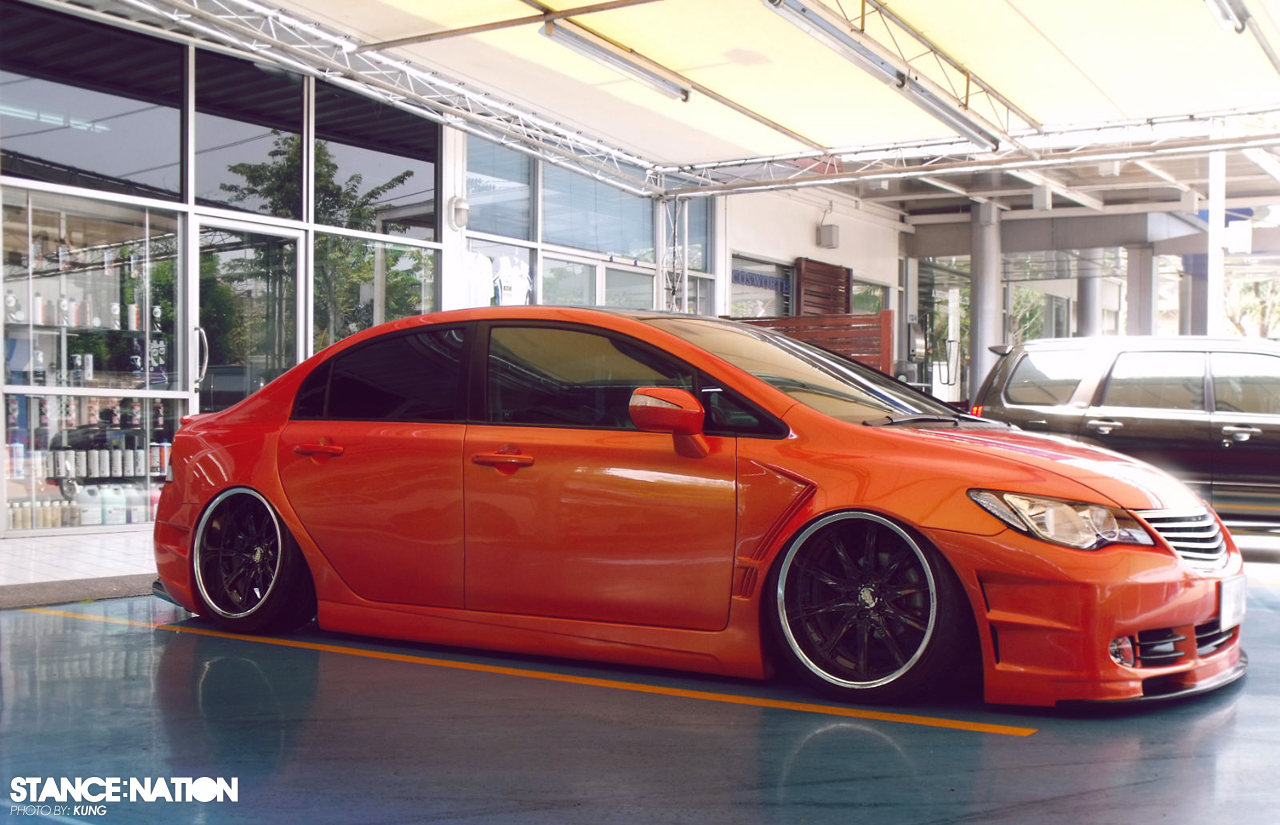 We’re all well aware by now that Japan has the VIP game on lock, but just a couple of thousand miles southwest of Japan is another country that we should all keep our eyes glued on. Mark our words, in the next couple of years (if not sooner) Thailand will be playing a very important role in the VIP world. What differentiates Thailand from Japan is their lack of support from the after market companies. Unlike Japan where you have Crowns, Aristos, Celsiors and Cimas running around everywhere, Thailand is all about their Camrys, Civics and Accords. One thing that both of these countries have in common however is their passion for uniqueness and the ability to pull off some of the best body work that you’ll ever see. Please allow us to introduce you to Kung and his extremely badass, VIP Style Honda Civic.

Photos By: Kung exclusively for StanceNation.com 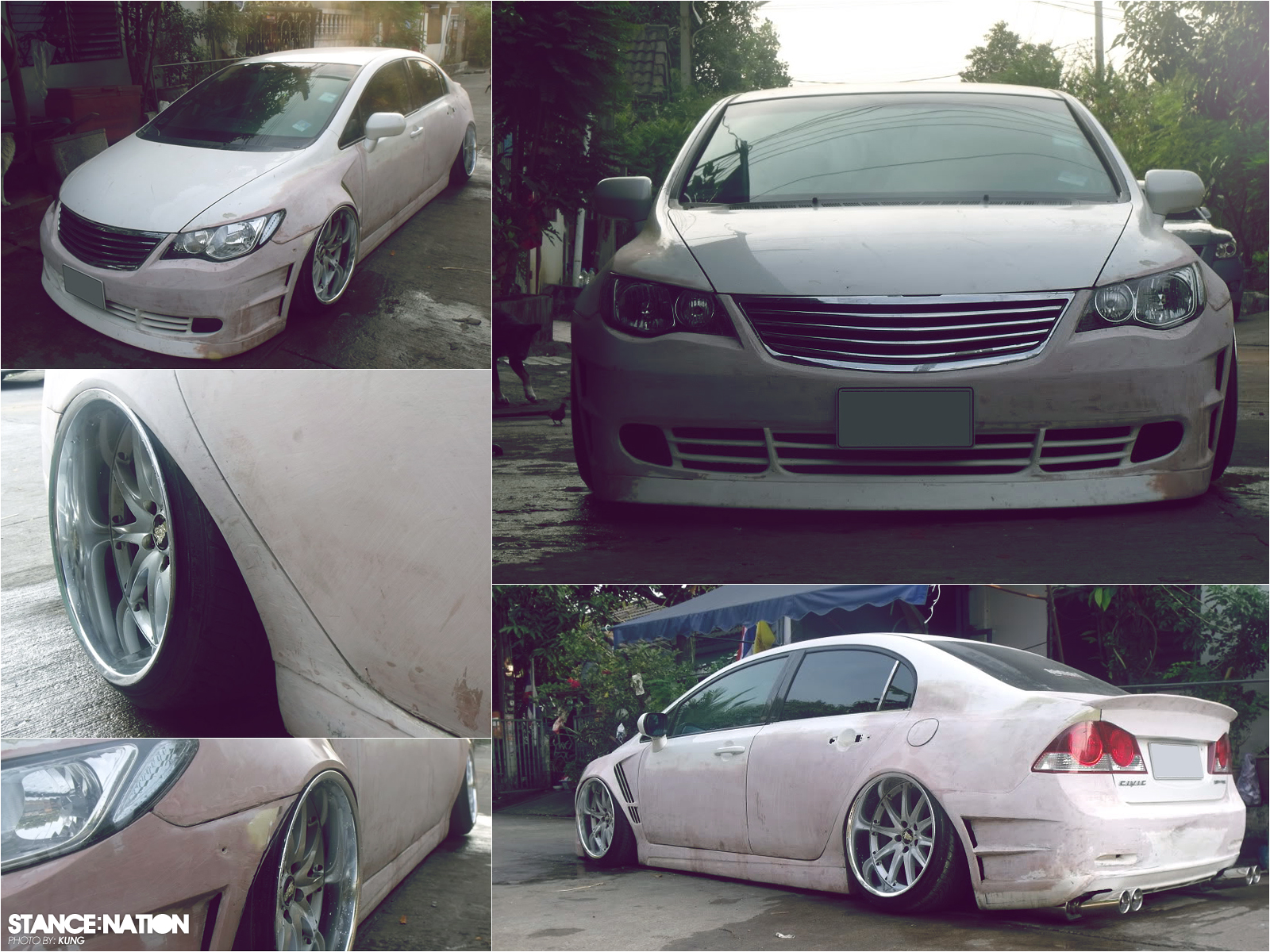 As you see in the photos above, literally every piece of this car has been modified in one way or another. While Thais truly enjoy a good wheel fitment, sitting on a stock bodied car won’t get you much respect. We’ve been watching Kung build his Civic for months now with the help of fellas from Car-Dance, and the work that was put into this thing is pretty damn incredible. All the hardcore VIP fans will right away recognize the Mode Parfume kit, and the OG Kranze Shoki wheels. The kit was obviously modified specifically for Kung’s Civic and a couple of vents were added here and there just to be that much different from others. Front fenders were widened 3 inches, and the rears were widened 4 inches! 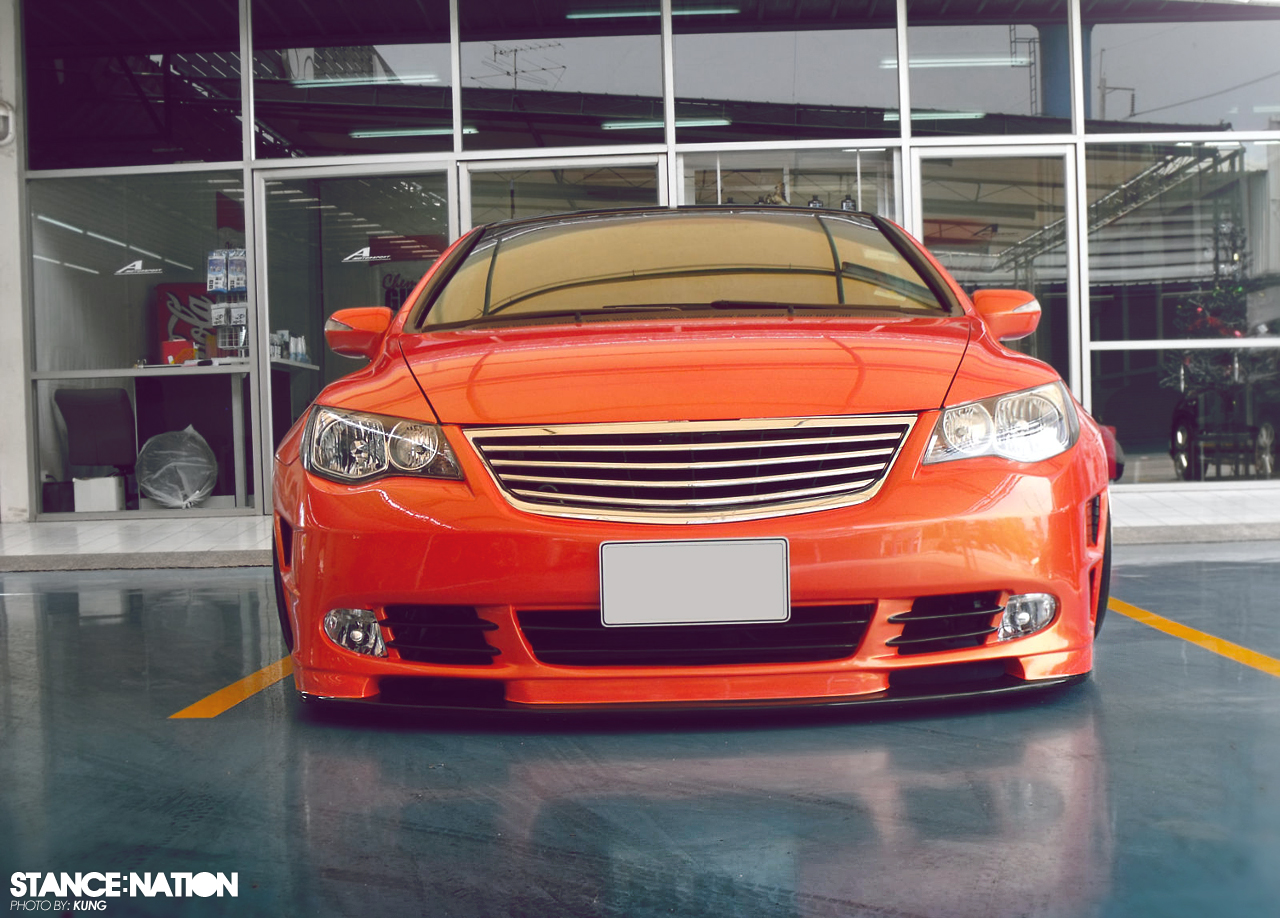 We’re also loving those aggressive Weds Kranze Shoki wheels! They’re 19×9.5 [-25] up front and 19×10.5″ [-35] rears. We never would have thought 19’s would look right on a Honda Civic, but this changes things. Kung couldn’t have picked out a better size in our opinion. The thing that threw us off at first was the “positive-like camber” up front, but if you look at it from certain angles it’s really not positive. Crazy rear camber and the shape of the front fenders are just playing tricks with our eyes. Hit the Read More button below for some more pictures of this awesome VIP Style (inspired) honda Civic! 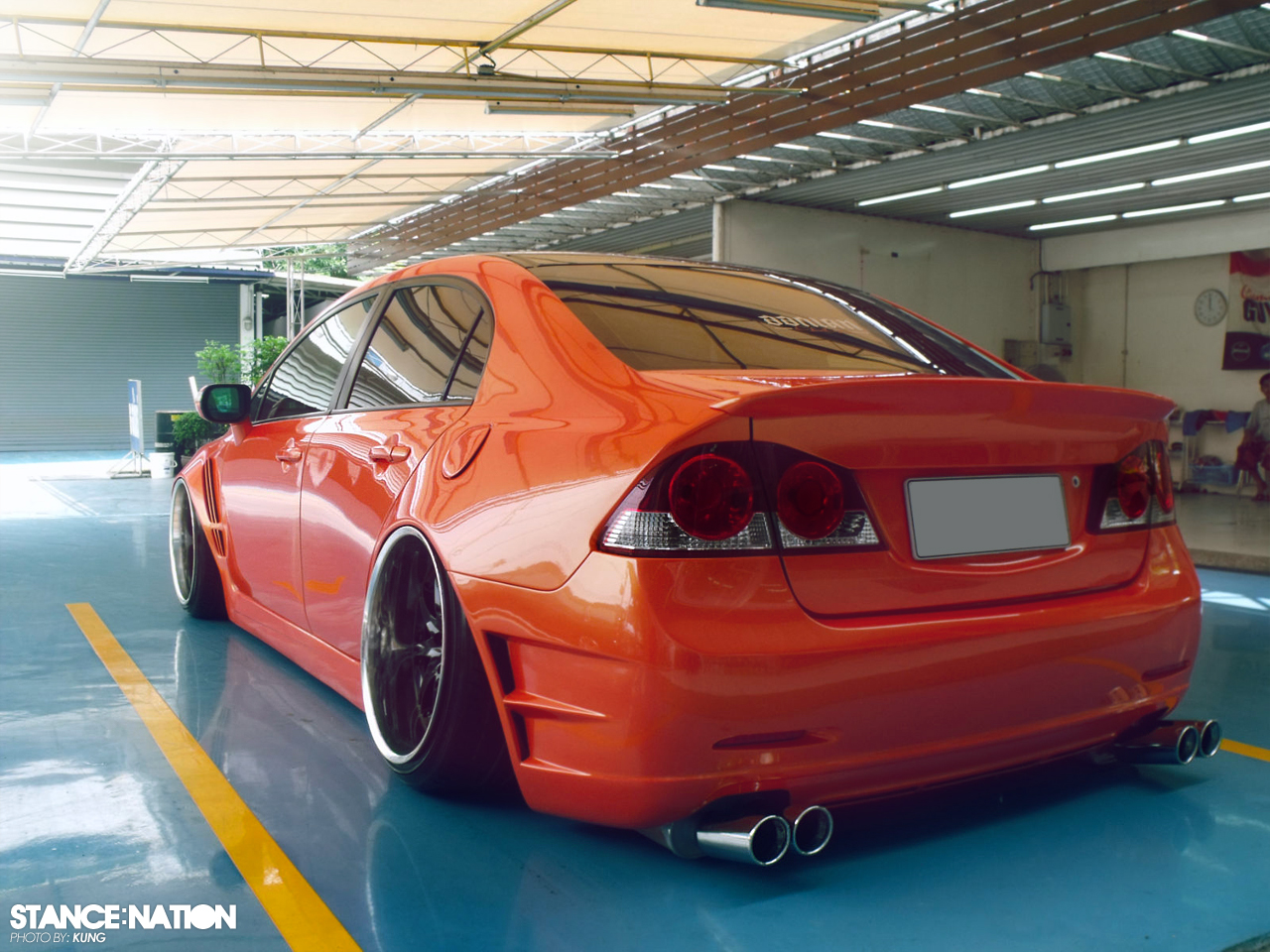 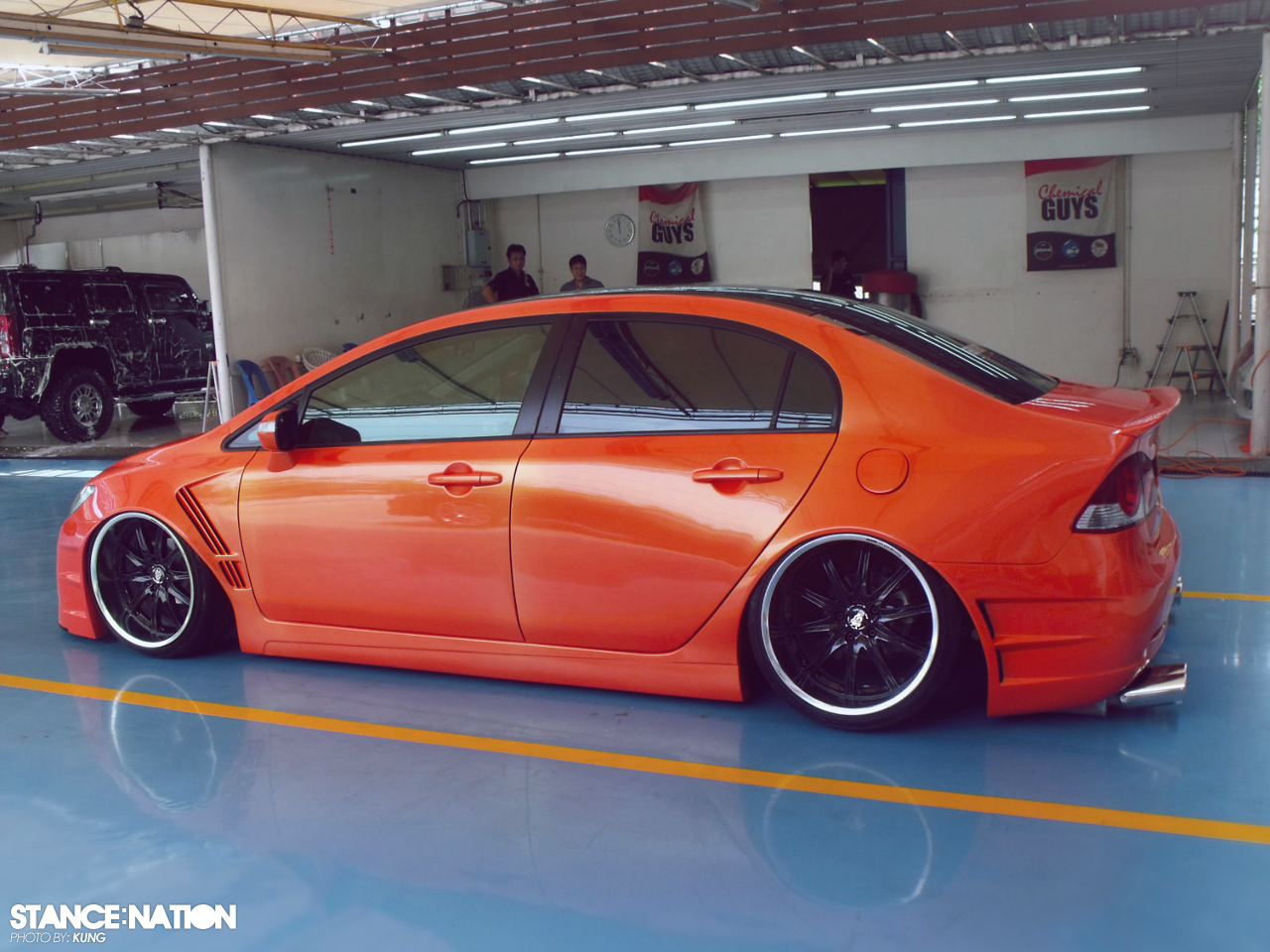 You’ll be seeing a lot more cars from Thailand in the very near future. We sometimes feel like we’re the bridge between all these countries, and it’s our obligation to bring us all together. We can’t thank Kung enough for wanting to show off his car with rest of the world! Also a big thanks to our friend Queie for all of his contribution to Stance:Nation. We know that a lot of you Thai guys will be looking this feature over, and we would like to tell you that it’s an honor to show your cars off. We’re huge fans, keep doing your thing! Make sure you scroll down to check out rest of the pictures, and be on a lookout for more! 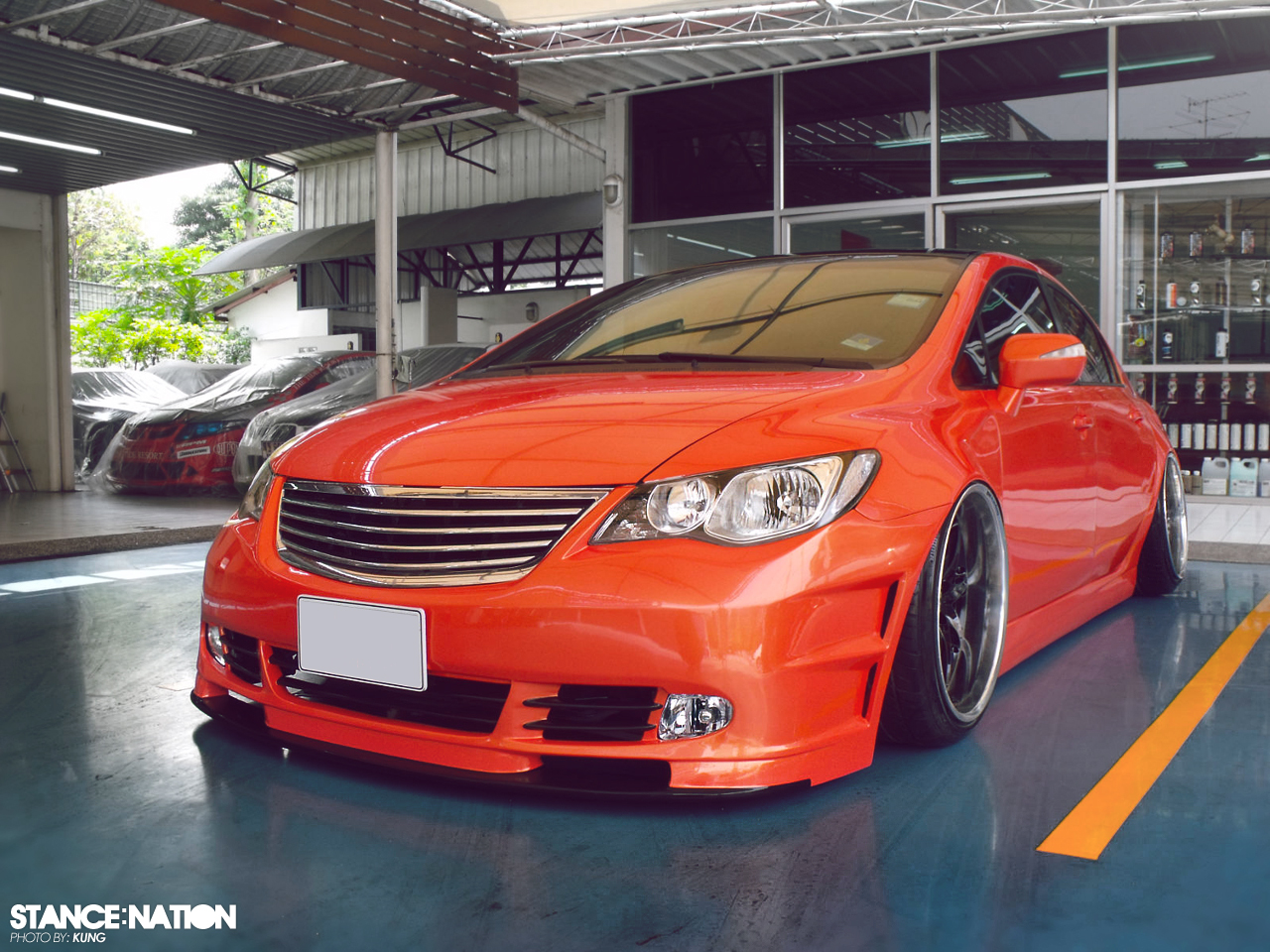 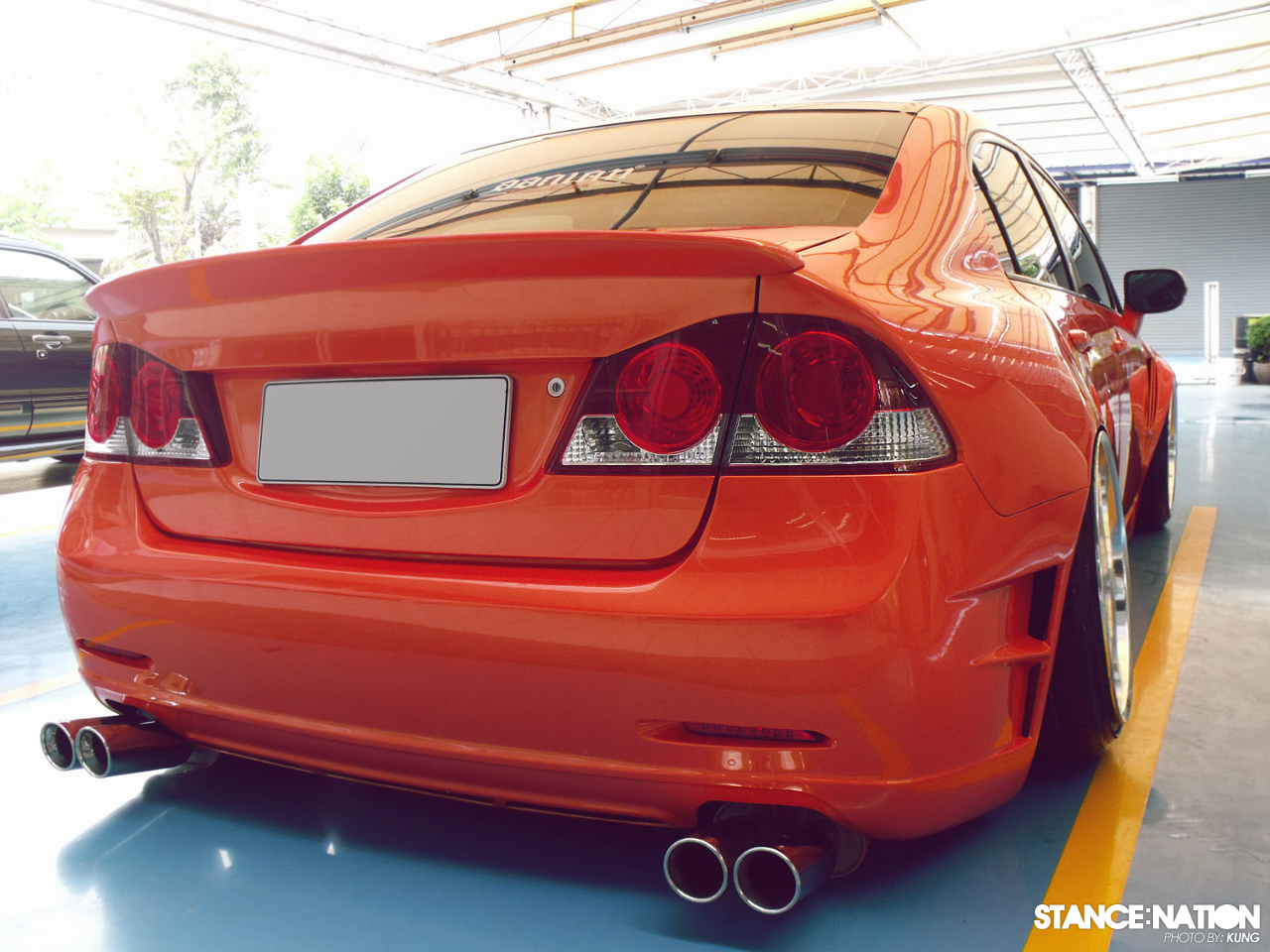 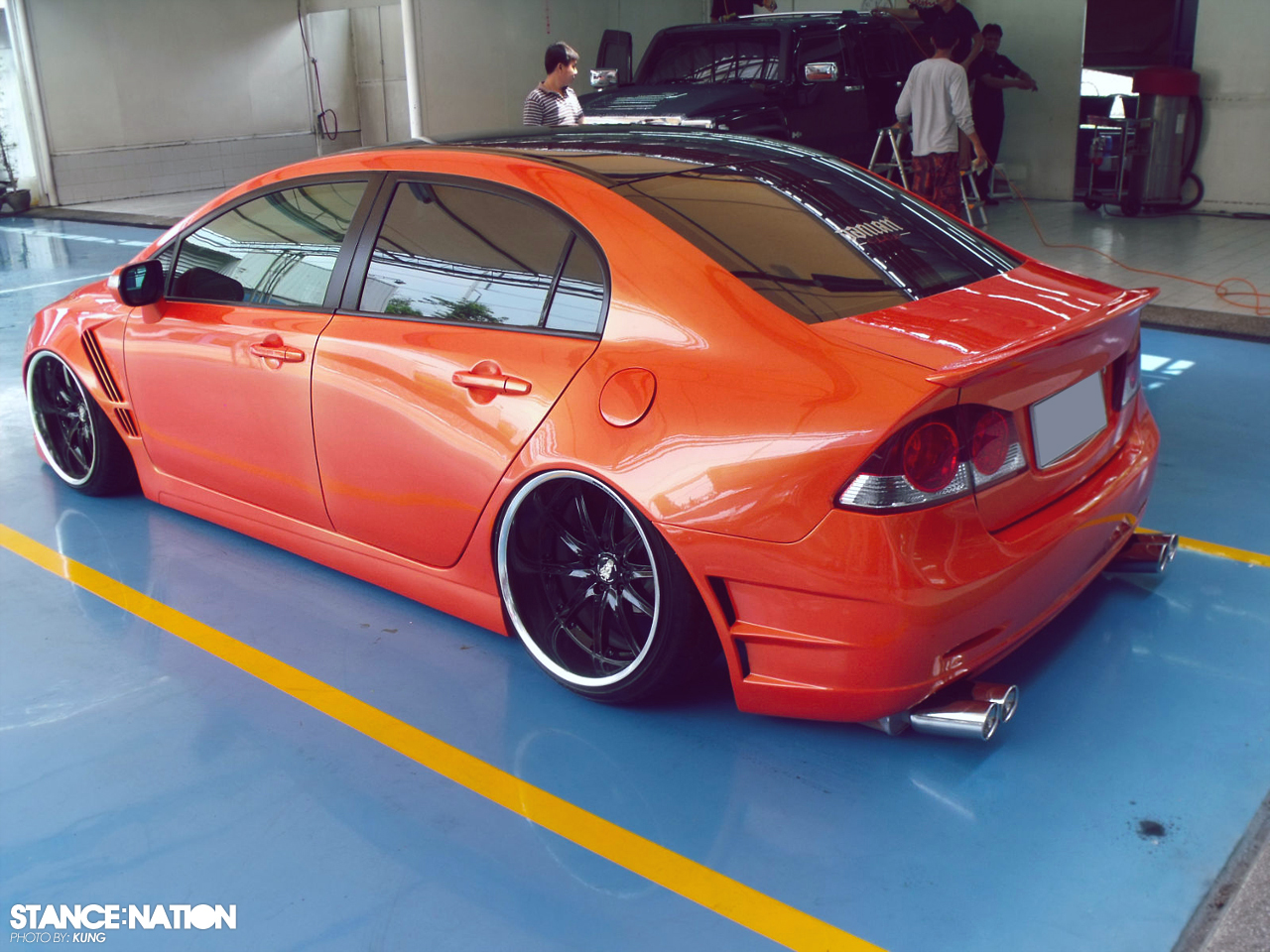 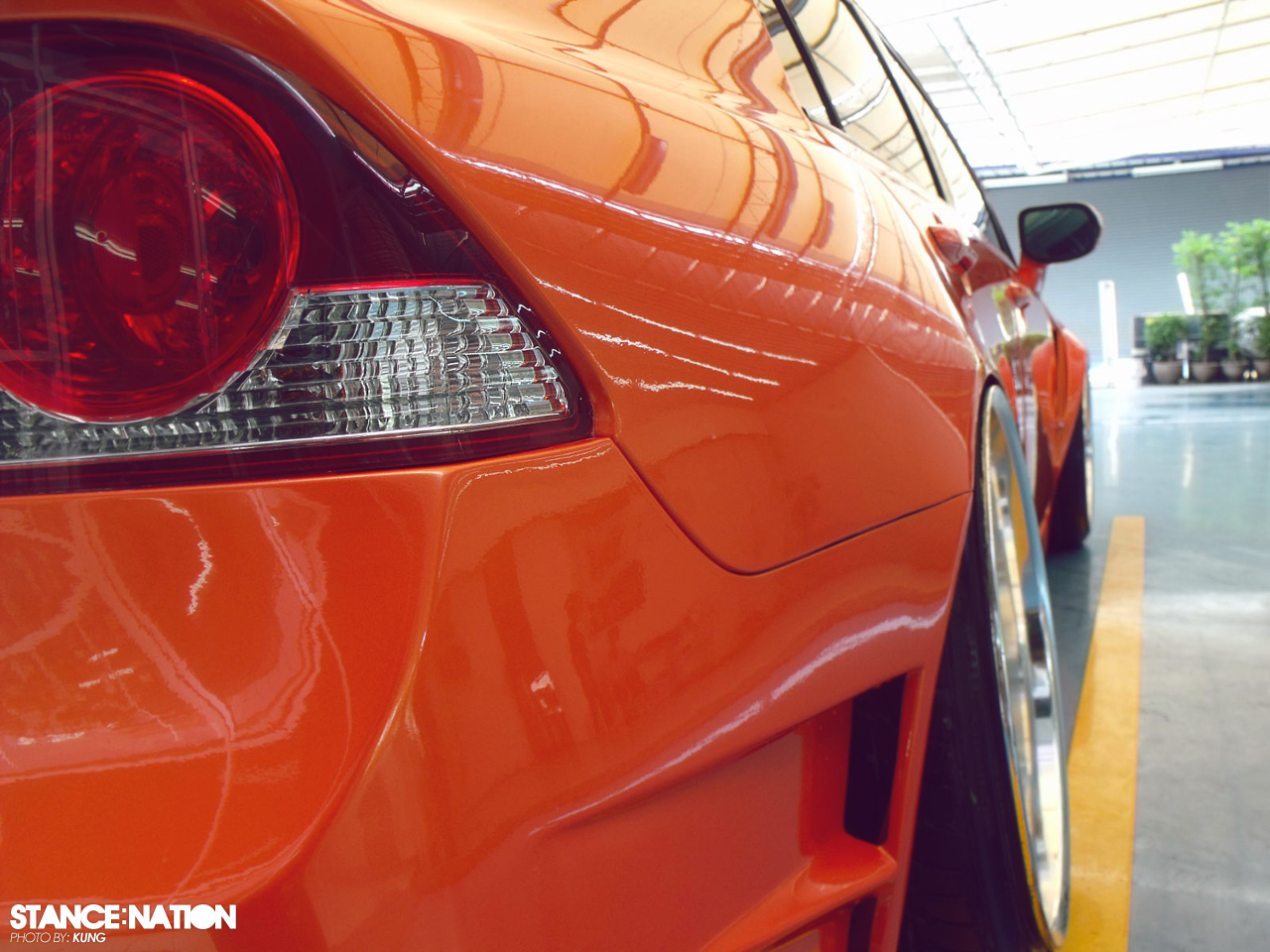 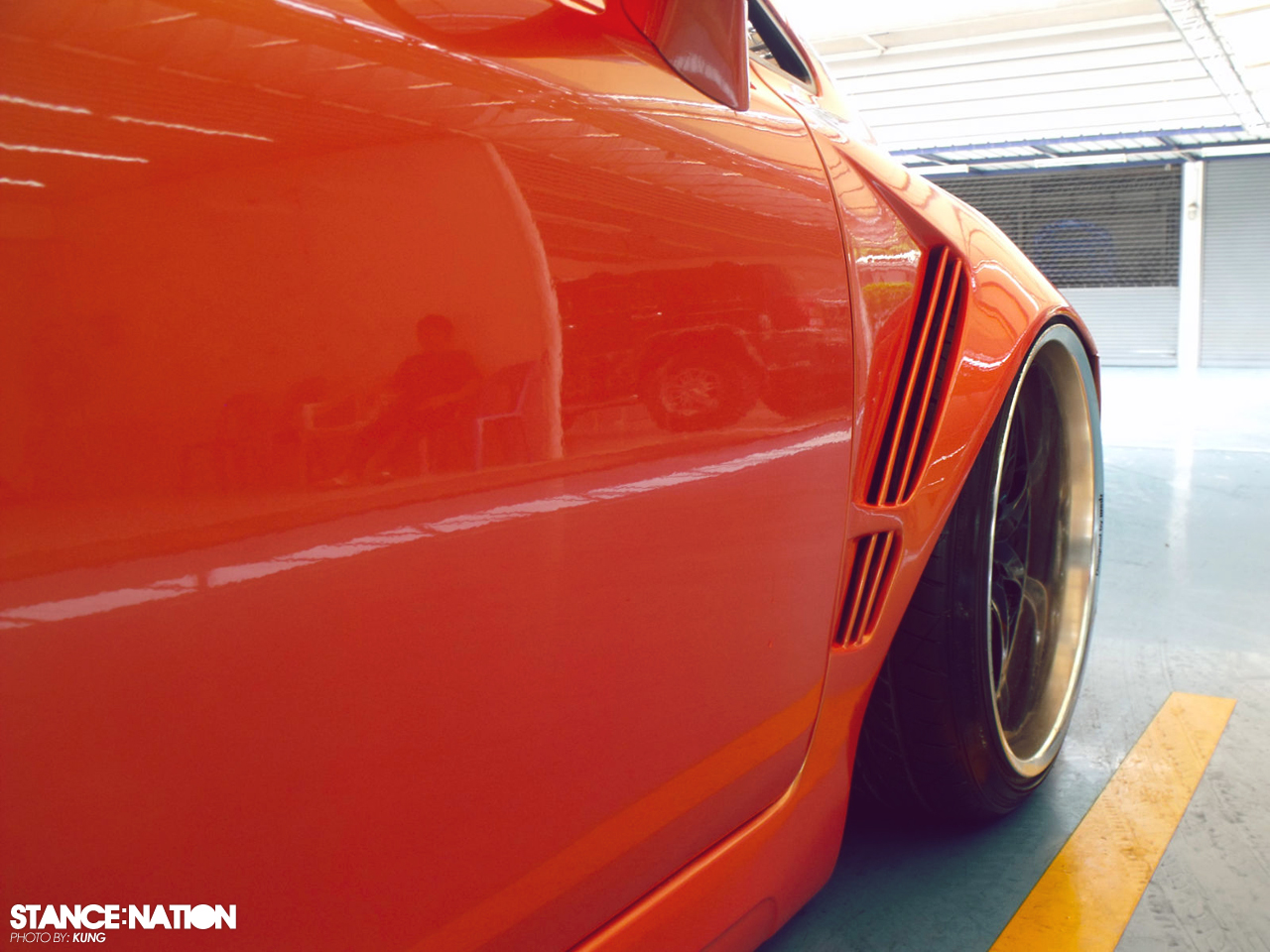 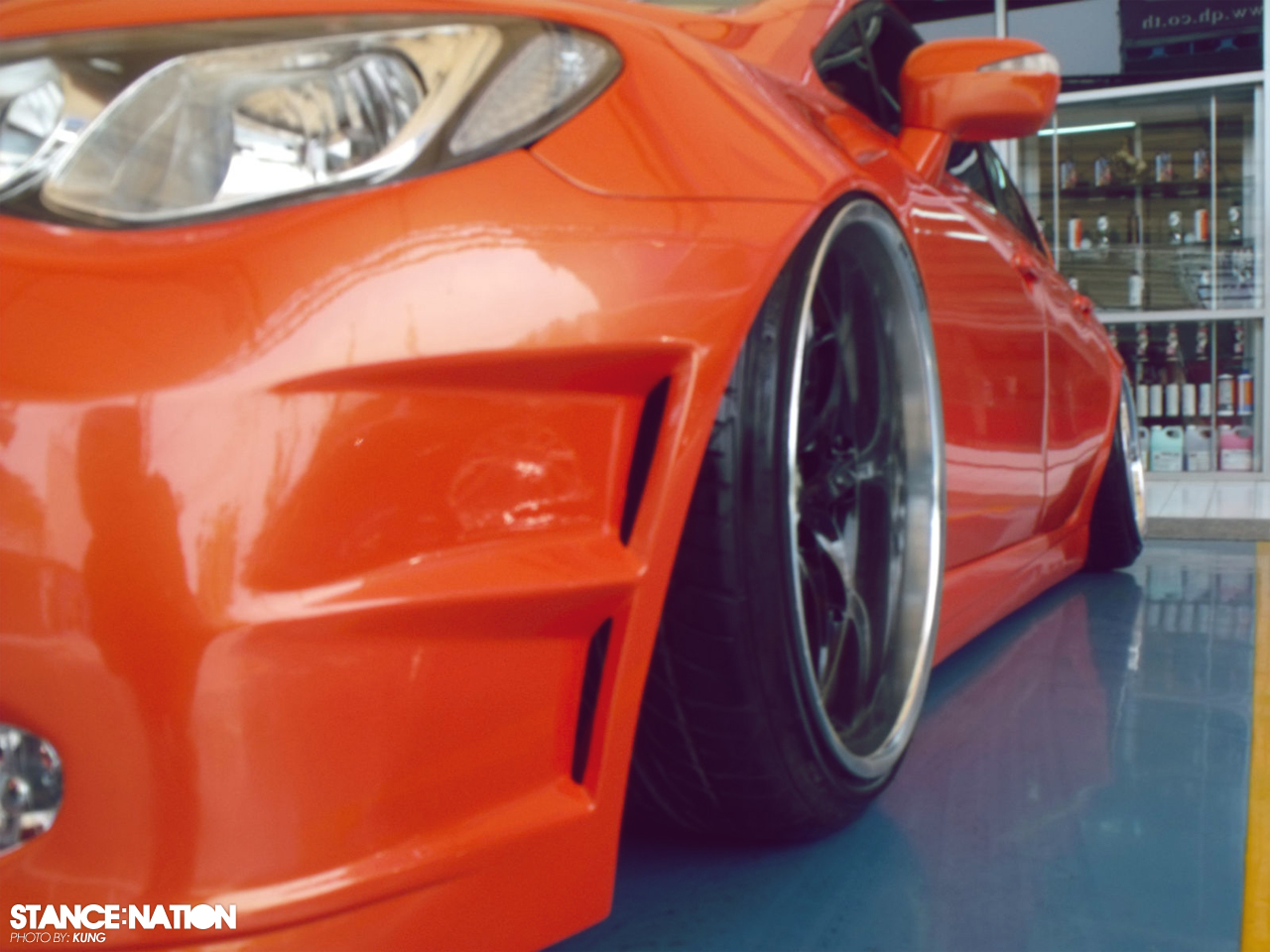