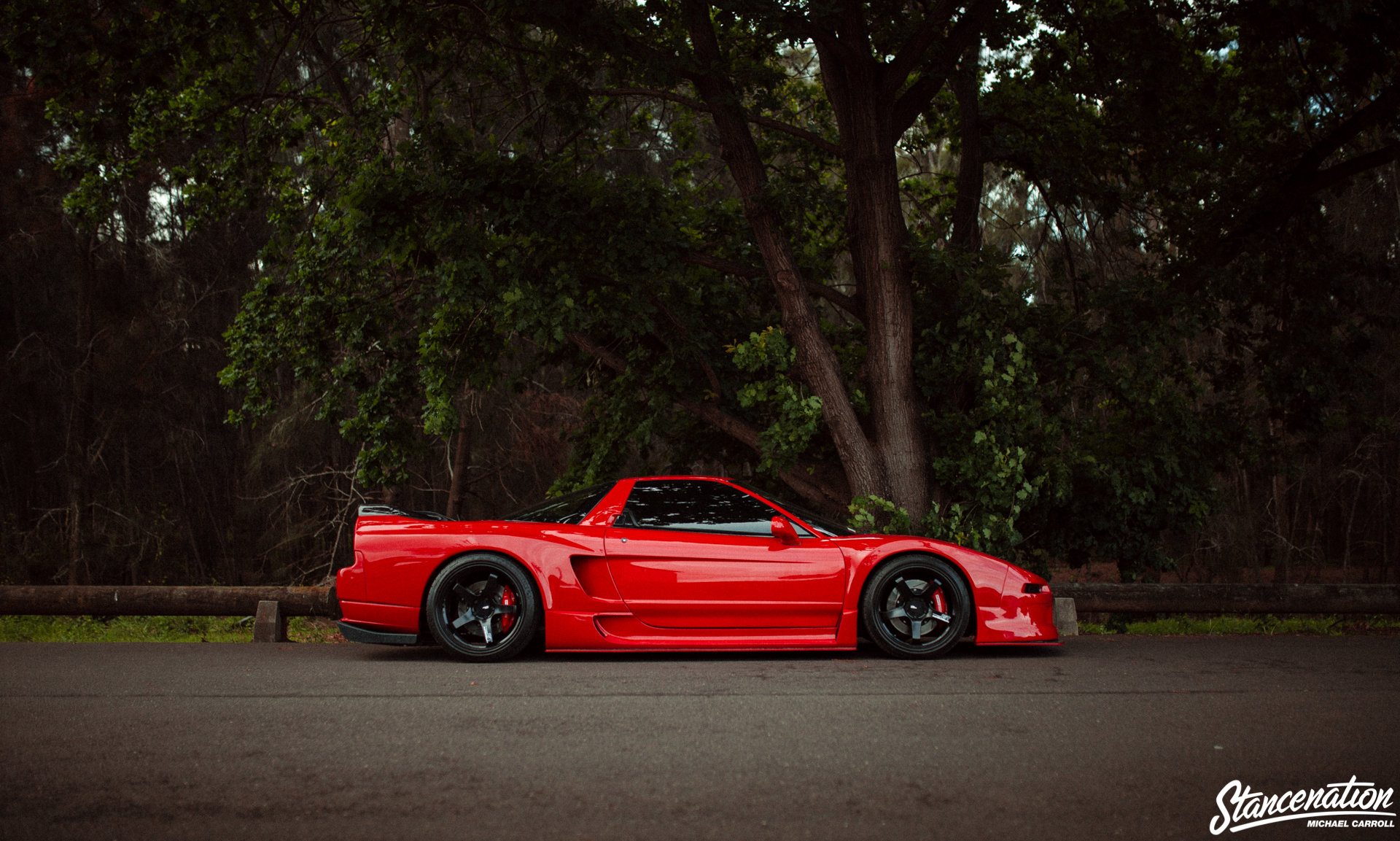 The Pinnacle of Perfection // The 5ENNA NSX.

Honda introduced the NSX in the 90’s, which, in my opinion happens to be the best era of cars. The perfect balance between “safety” and amusement, the 90’s blessed us with many beautiful platforms such as the Celsior, Estima, Porsche 964, and the E30 reiteration of the BMW M3, just to name a few. These magnificent snapshots of the era all come to mind when I think of the 90’s. However, sitting there at the very top would have to be the Honda NSX, the pinnacle of perfection – and I didn’t think a bar set so high could sit so damn low. 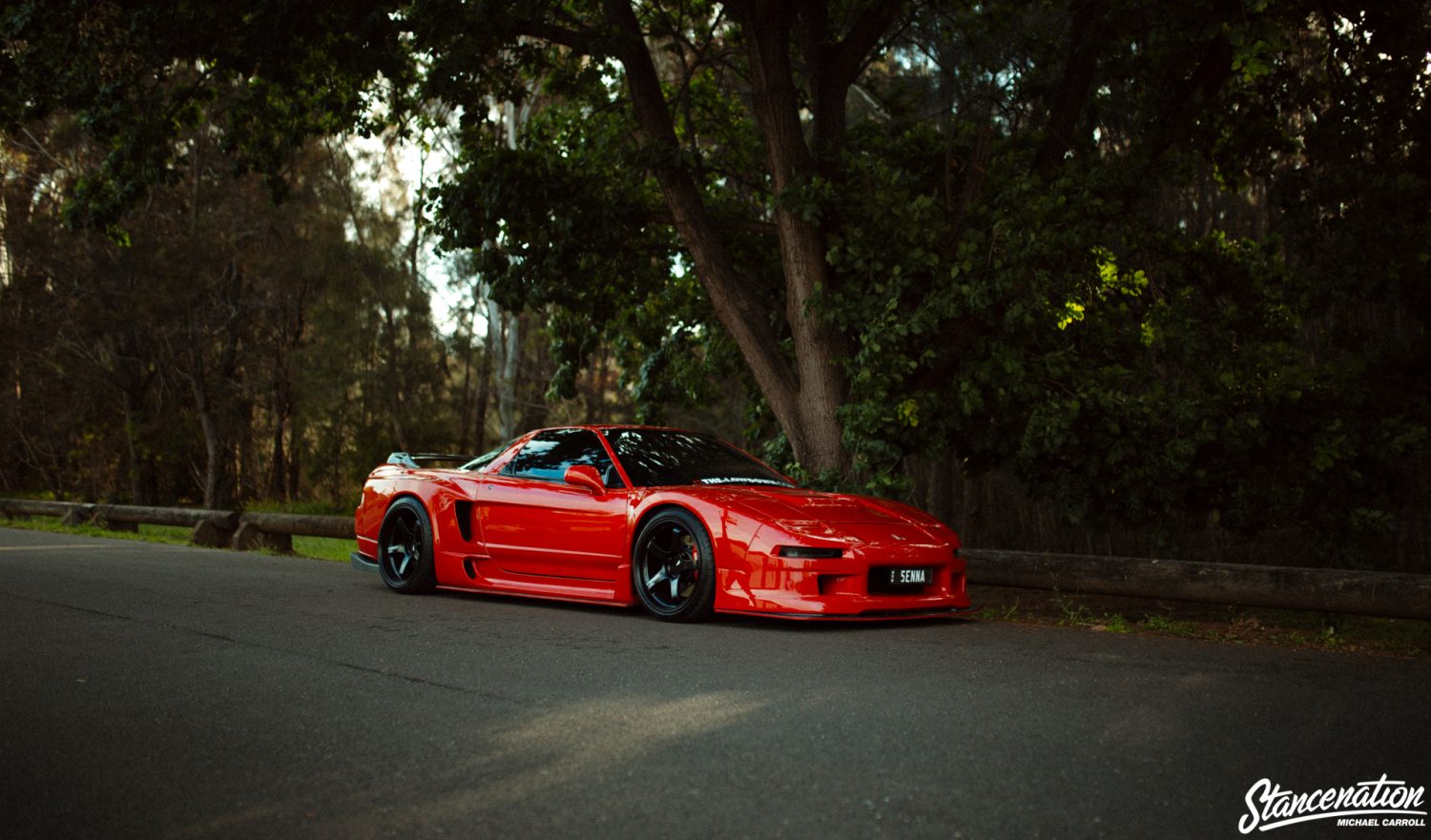 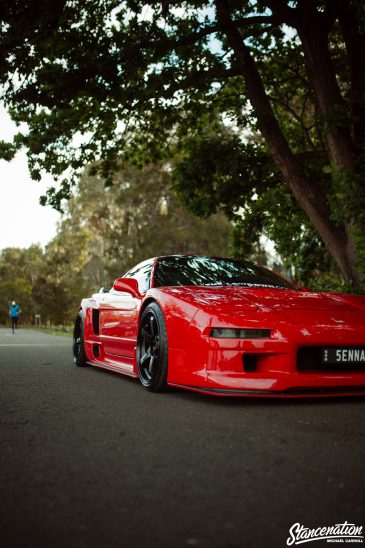 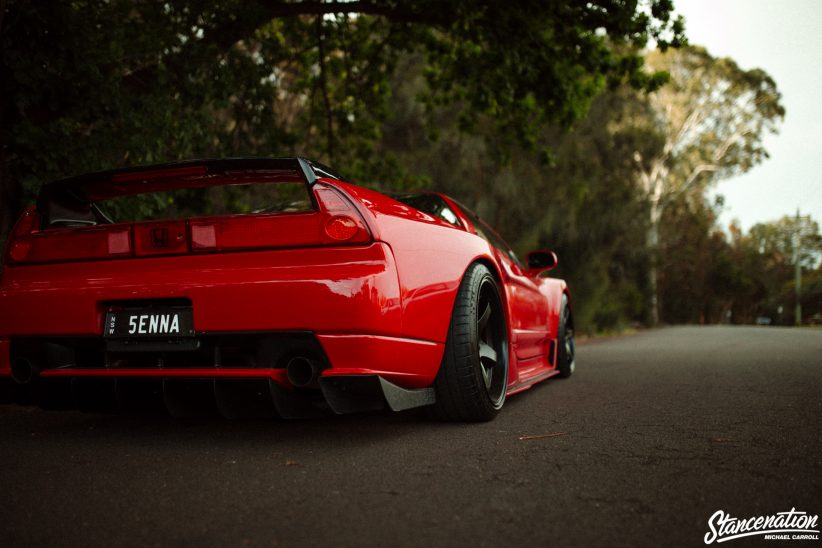 Arguably, some would say that the nineties MKIV Supra should take the top position as the “Best JDM sports car of the 90’s”, and if this was a speed contest I wouldn’t argue. But the way this tastefully modded creation sits, I just can’t give that award to the Toyota. The gentlemanly lines of the NSX win the imaginary competition hands down, extended beautifully by the Marga Hill sideskirts finished with custom extensions. At the front, is a custom bumper and Seibon Carbon Front Bonnet, keeping many of the original features of the NSX, with a modernized and aggressive twist. At the rear is a custom set up, implementing a JDM rear bumper, Downforce Rear Valence, and a Difflow rear diffuser bathed in matte black for an impressive color scheme that I absolutely adore. Sorcery V2 widebody extends the width of the car giving it much more presence and grandeur similar to Italian supercars. 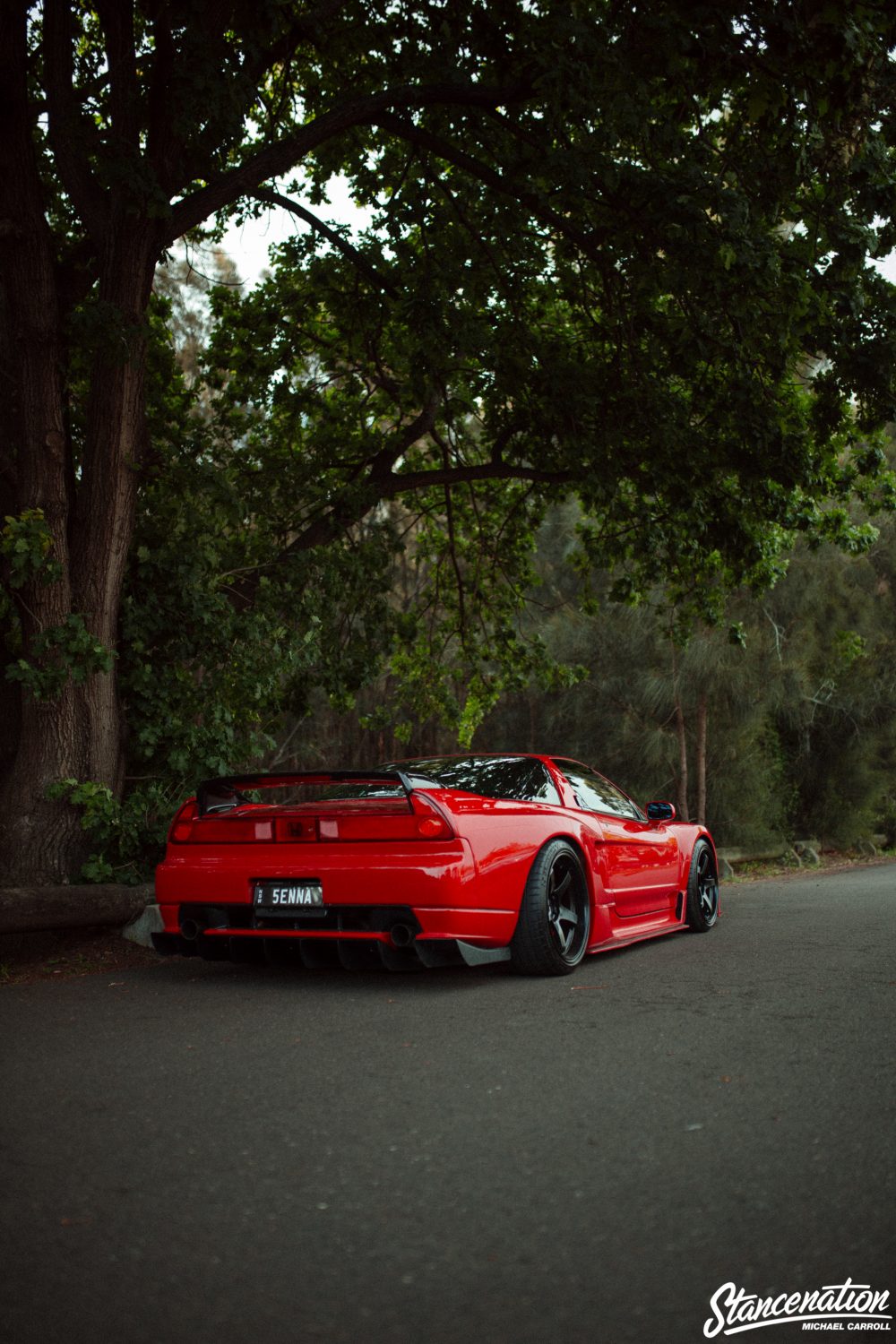 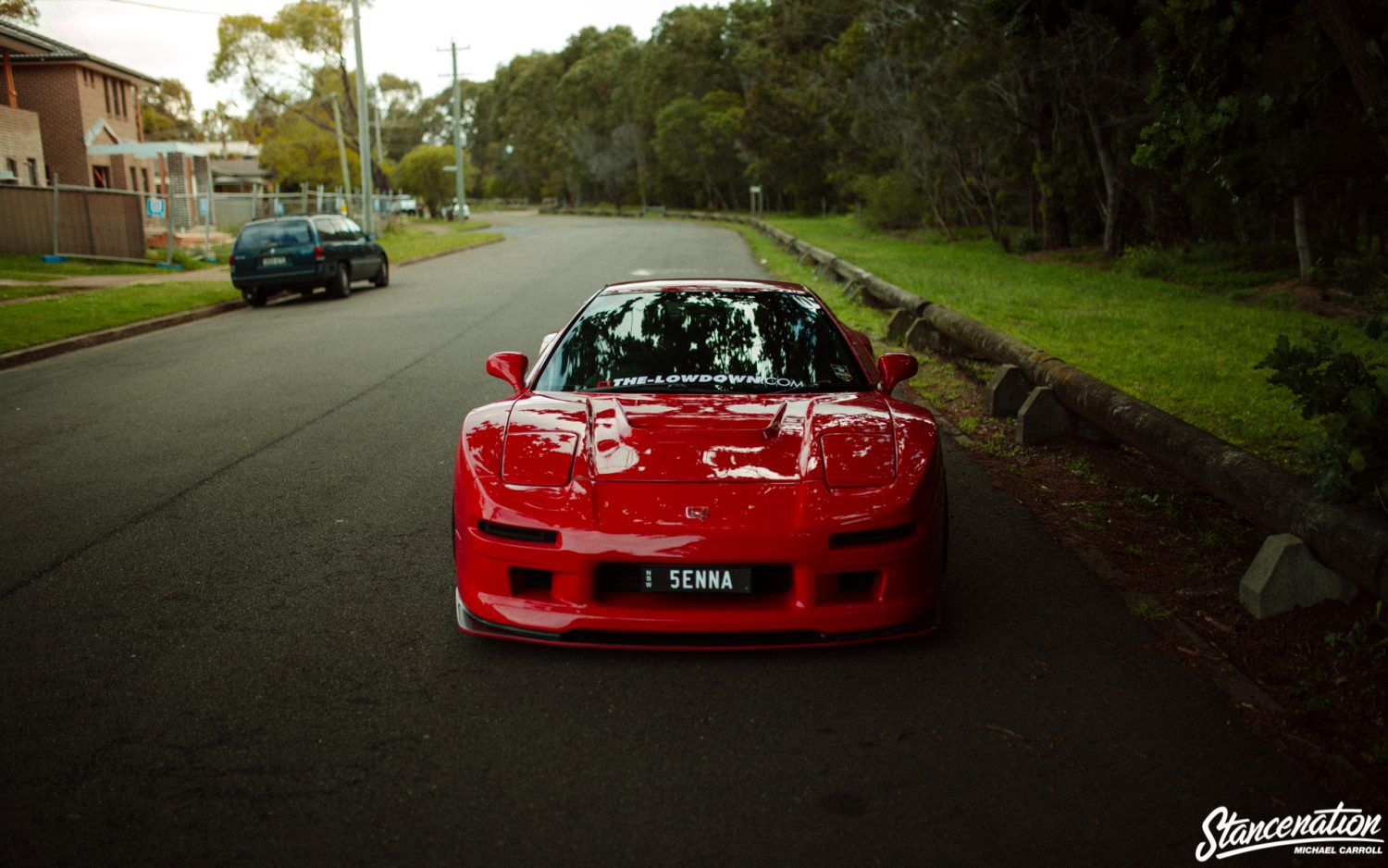 The way this car sits is just perfection, which contributes to the name. With the ideal amount of wheel gap for what it is, this NSX looks to have no issues at full lock. Although no crazy camber specs or absurd wheel specs, this NSX doesn’t really need it to grab your attention. With these tasteful and well picked modifications, it gives this iconic car even more presence with a hat tip to those with the eye to spot the mods. I’m sure to the uninformed public, this car could be considered a retro-inspired supercar from Ferrari or Lamborghini, with the paintjob adding another meaning to the phrase “Red Herring”. 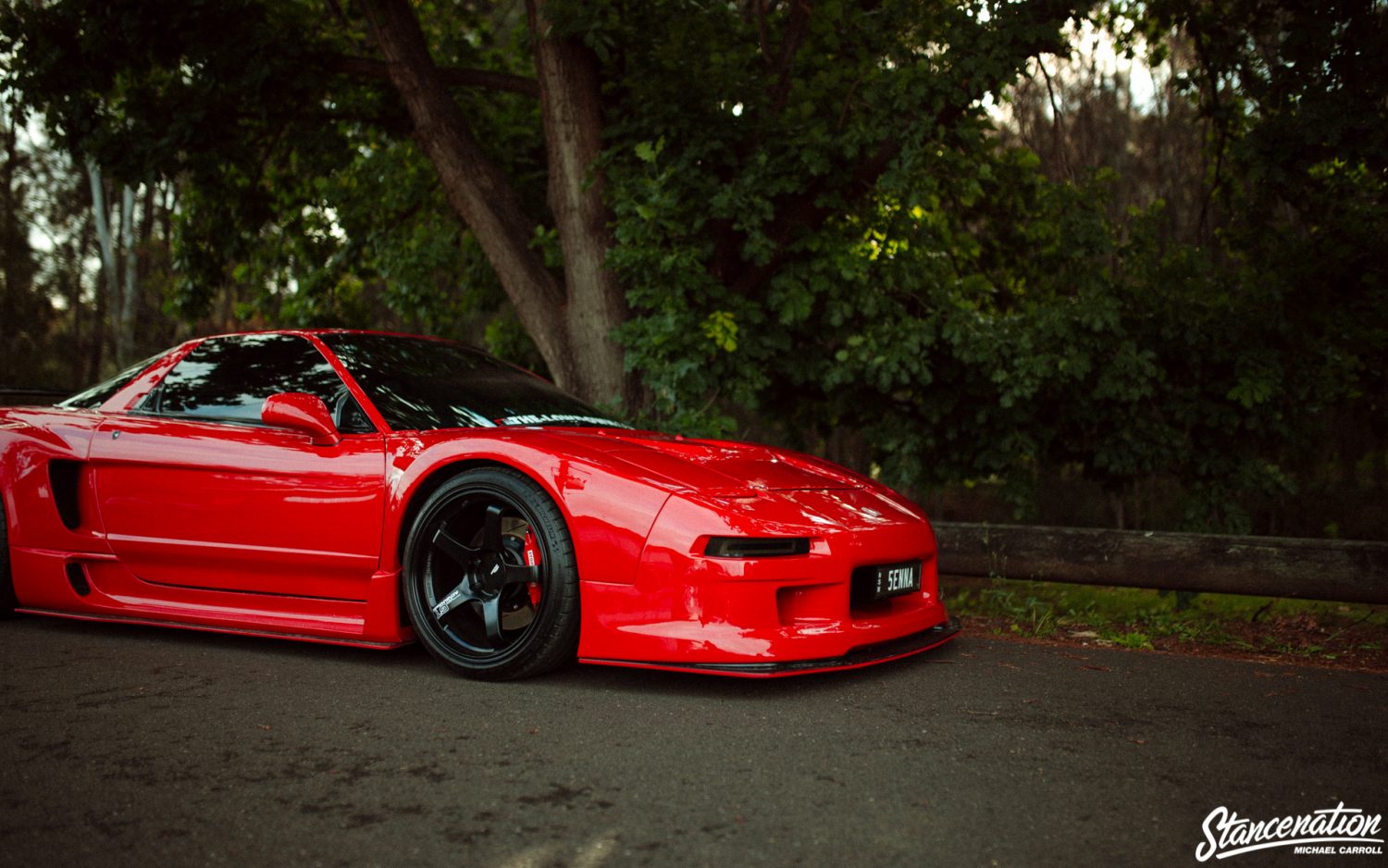 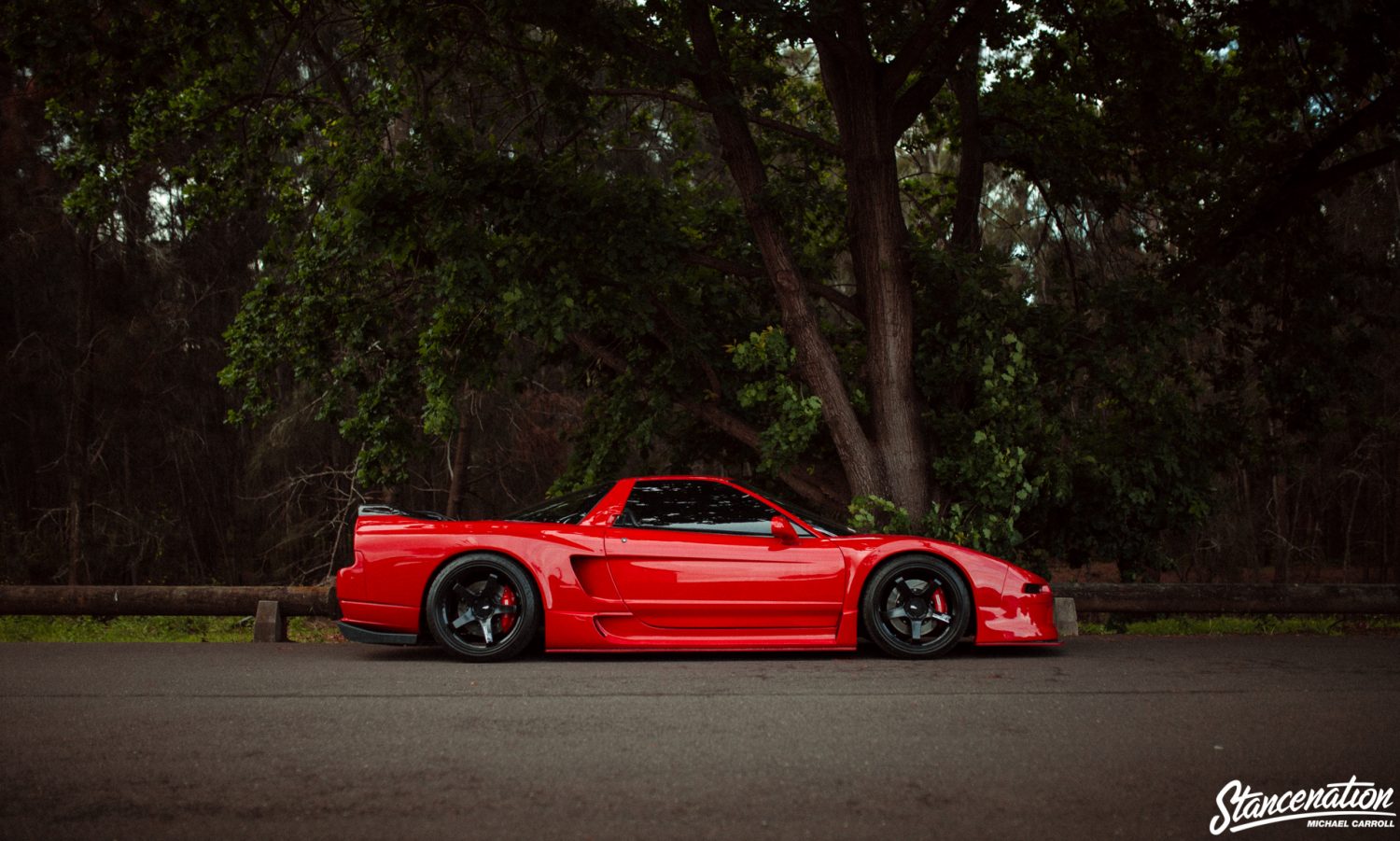 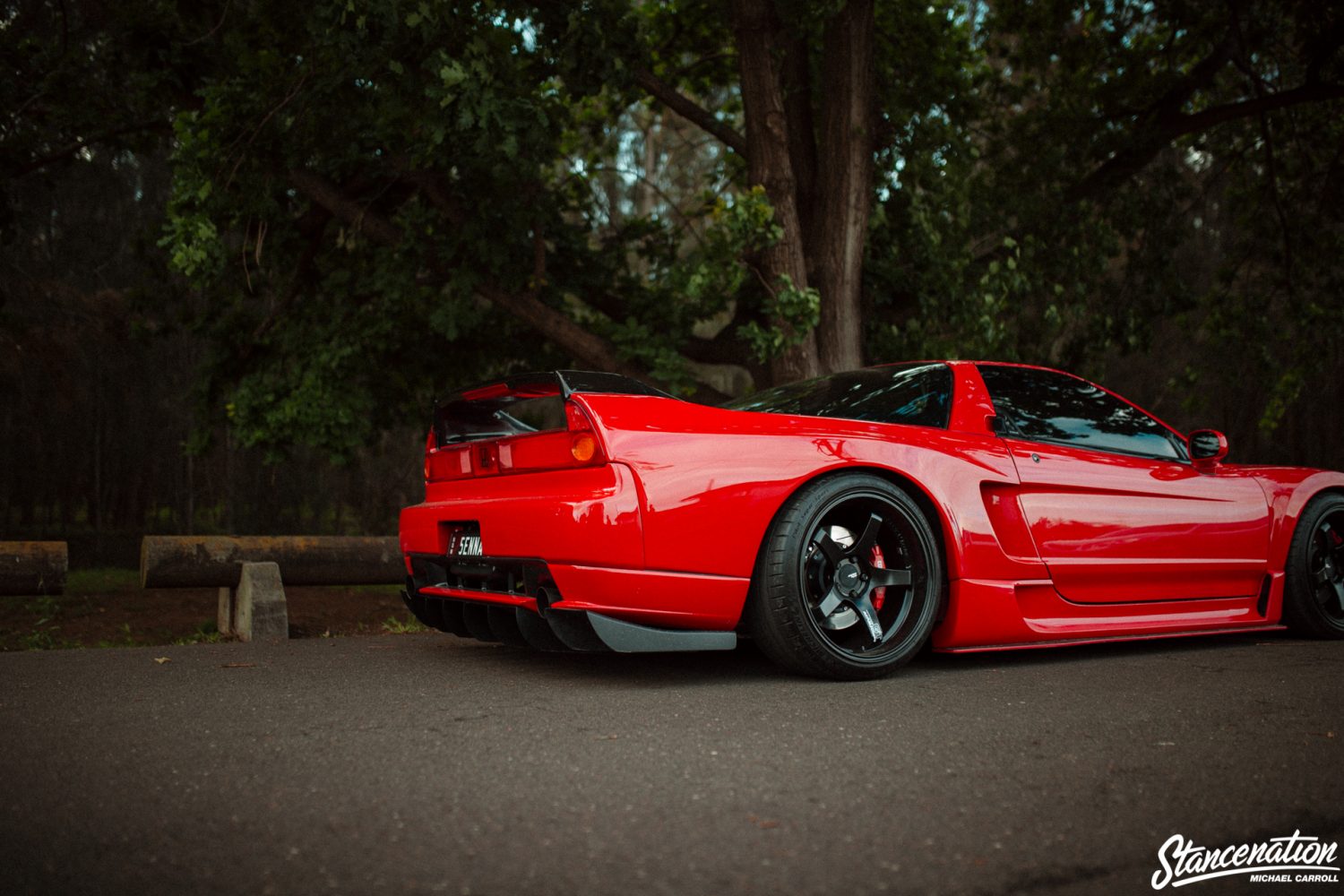 Attributing to the satisfying stance of the car is the finely tuned suspension systems. KW V3 Coilovers start as the base with iLift Hydraulic Cups over them, allowing for the raising and lowering of the car without sacrificing the performance of coilovers. Performance braces and sway bars from Dali Racing, Lovefab, and STMPO reinforce the already rigid chassis of the NSX, improving the handling of this nearly 30 year old car. Advan GT’s sit at all four corners in conservative, but respectable specs and are coated in a silky black that aligns to the color of the diffuser and Downforce carbon fiber rear spoiler. Stopping power is provided by 2pc floating slotted aero rotors and a 4-pot Stoptech BBK, with E-Brake if needed. 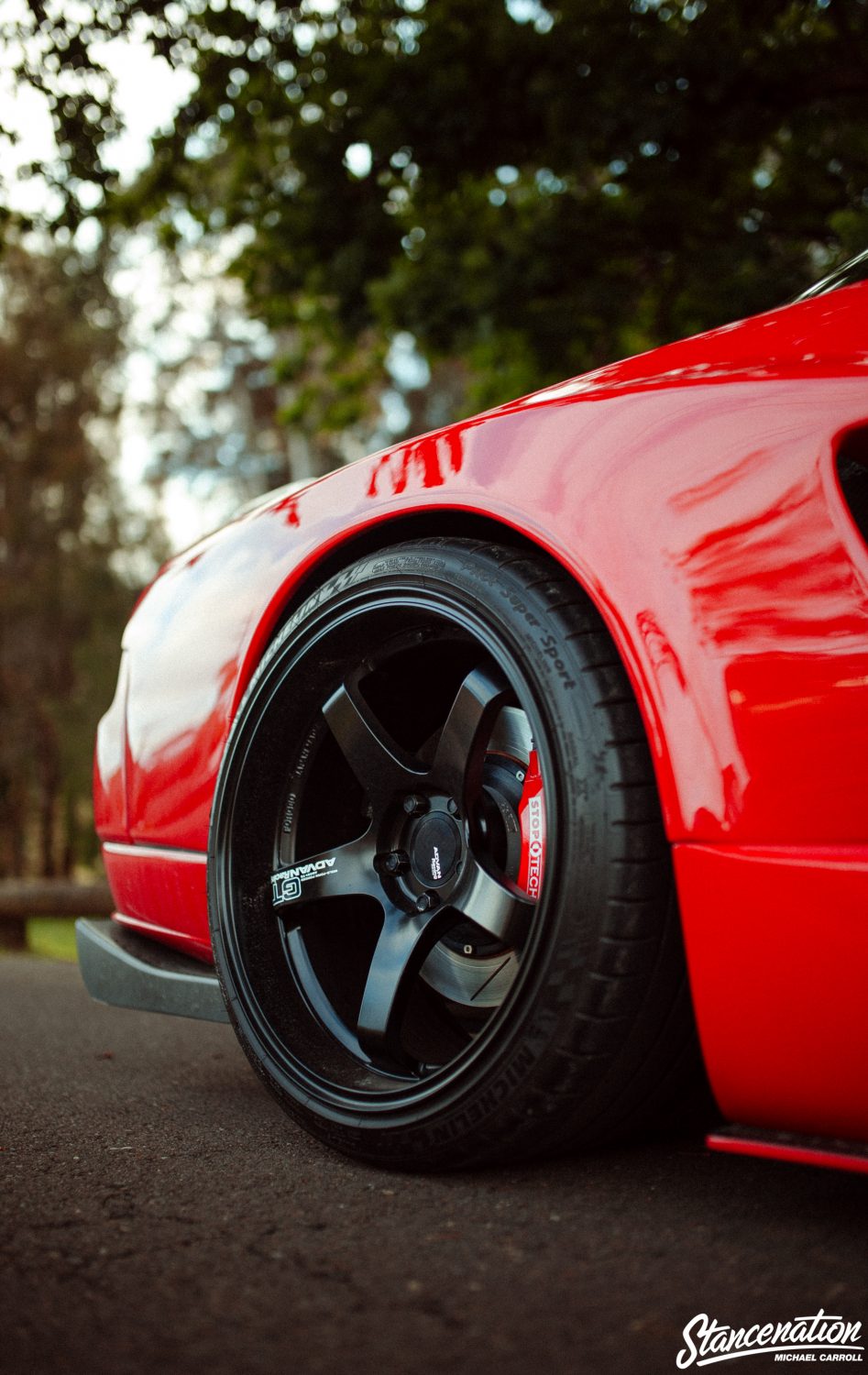 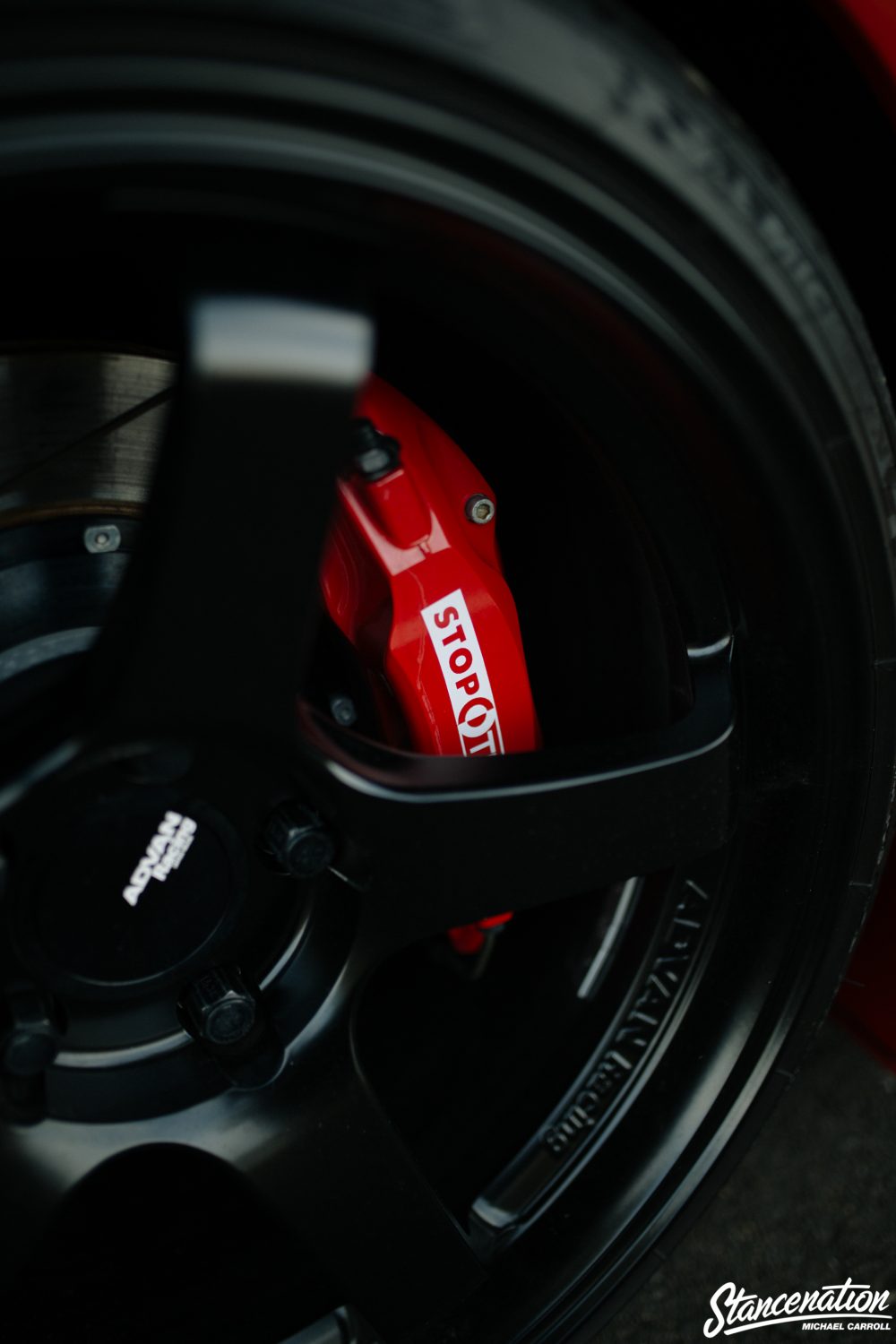 Within the immaculately kept engine bay, sits the 3.0L V6 power plant, with a feature that makes this one different from the others. Features like a Procar carbon fiber intake and Taitec headers help with the respiratory factors of the engine but the coolest features would be the NSX-R manifold cover which sits the autographs of Motoharu Kurosawa, a racing driver, but more notably, Shigeru Uehara, the project leader of the NSX, as well as the S2000 and RSX. A Lovefab coolant tank and oil catch can keeps the fluids proper within the engine during spirited driving. 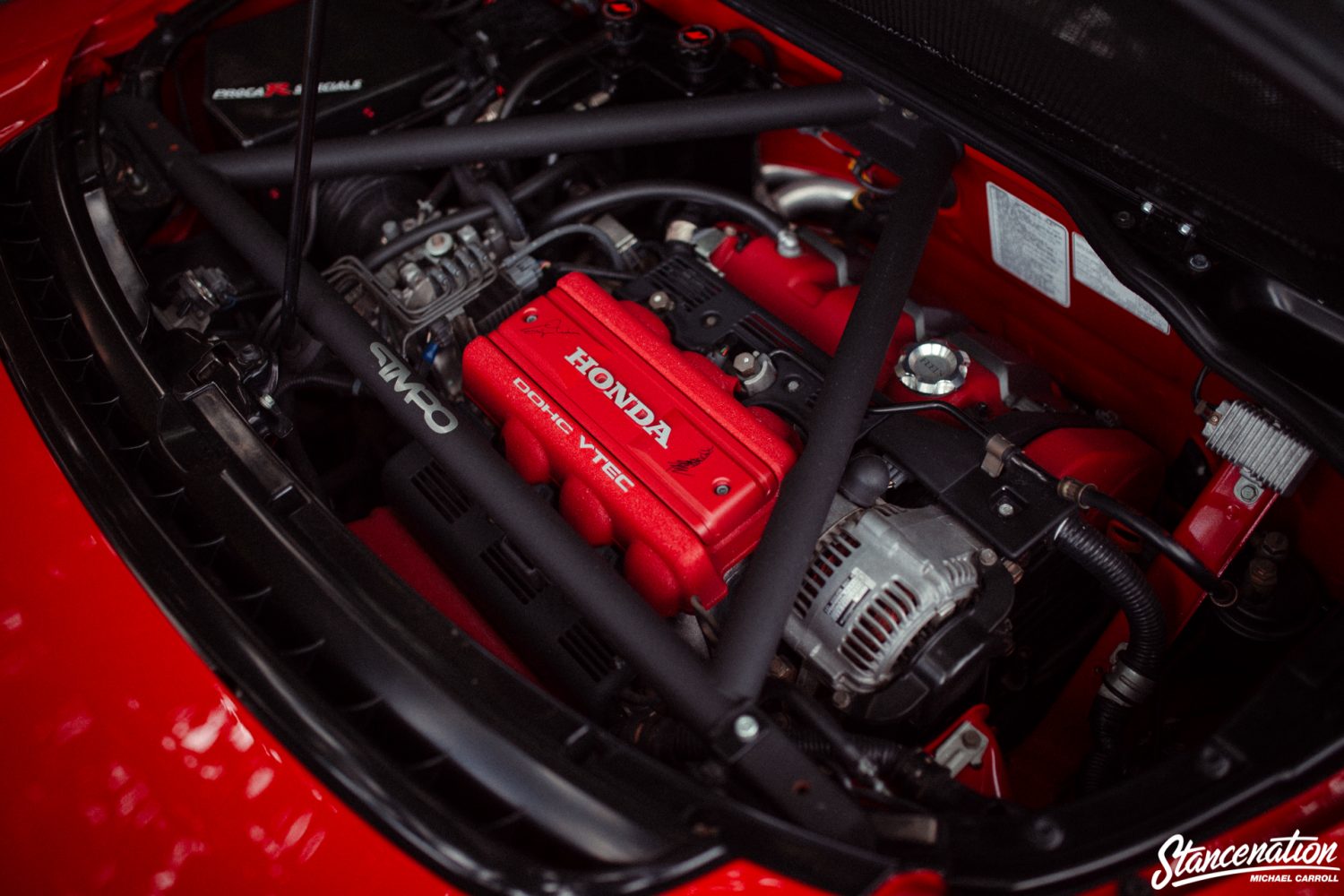 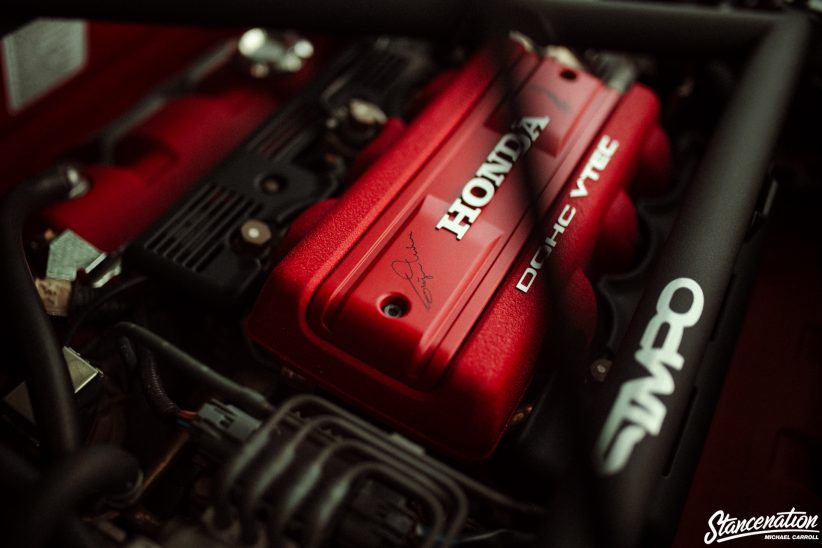 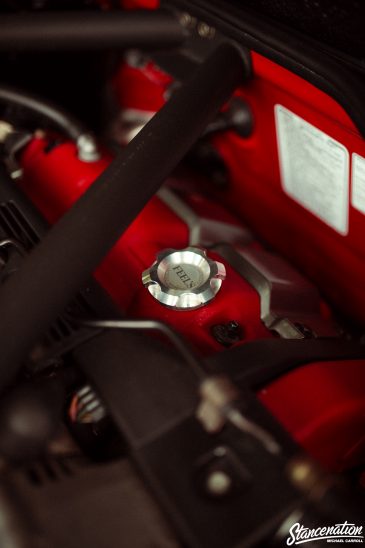 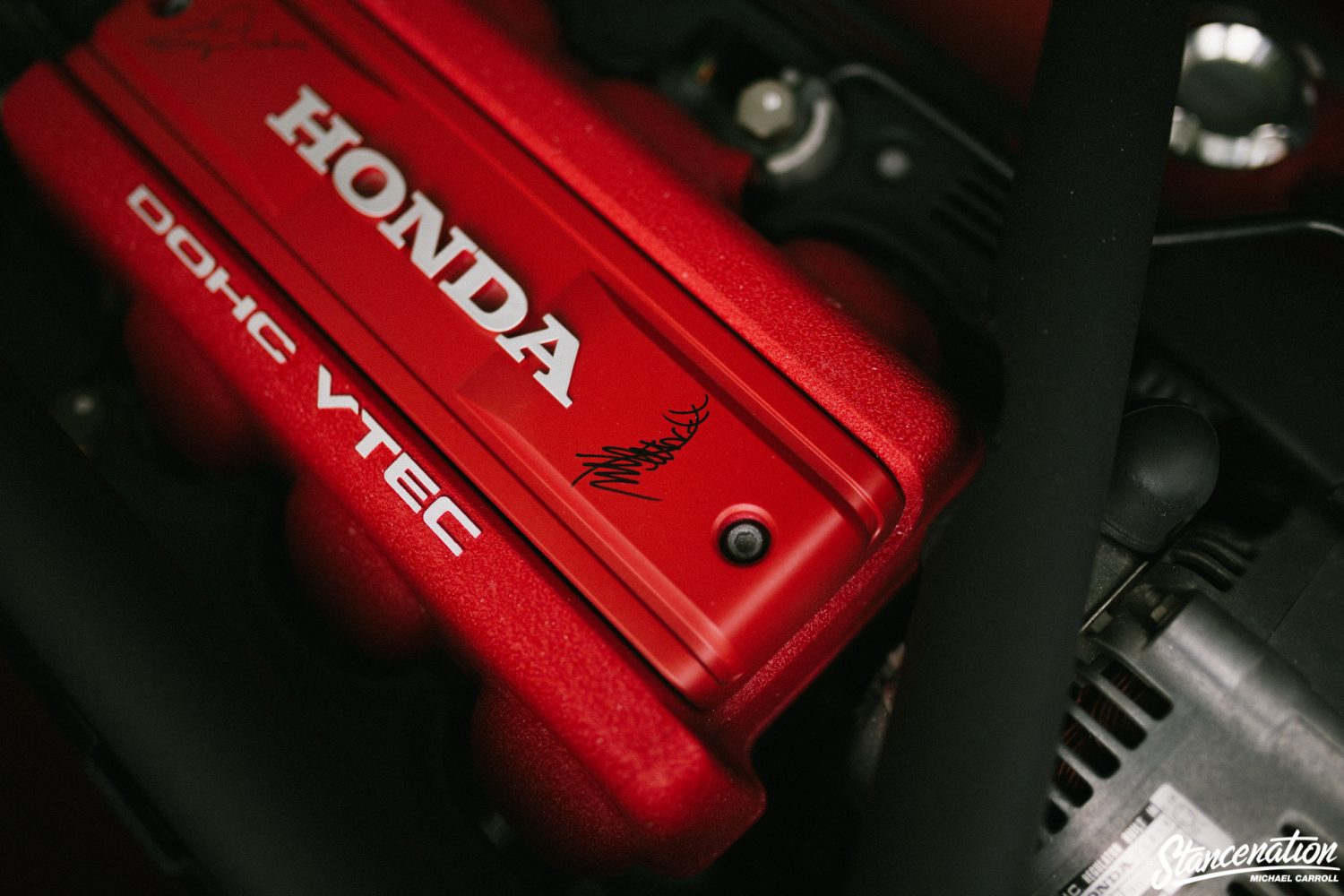 Within the cabin of this NSX are Status Ring GT Carbon Bucket Seats mounted on SOS Seat rails with red stitching, color matched to the immaculate paint job. A NSX-R steering wheel and associated controls were mated via Works Bell Short Hub and Quick release for piloting this artistic automotive creation. With custom alcantara door inserts and reupholstered carpets and boot, nothing short of the finest is allowed in this magnificent car. A peek at the glove box cover displays another signature from the mastermind behind this iconic platform. 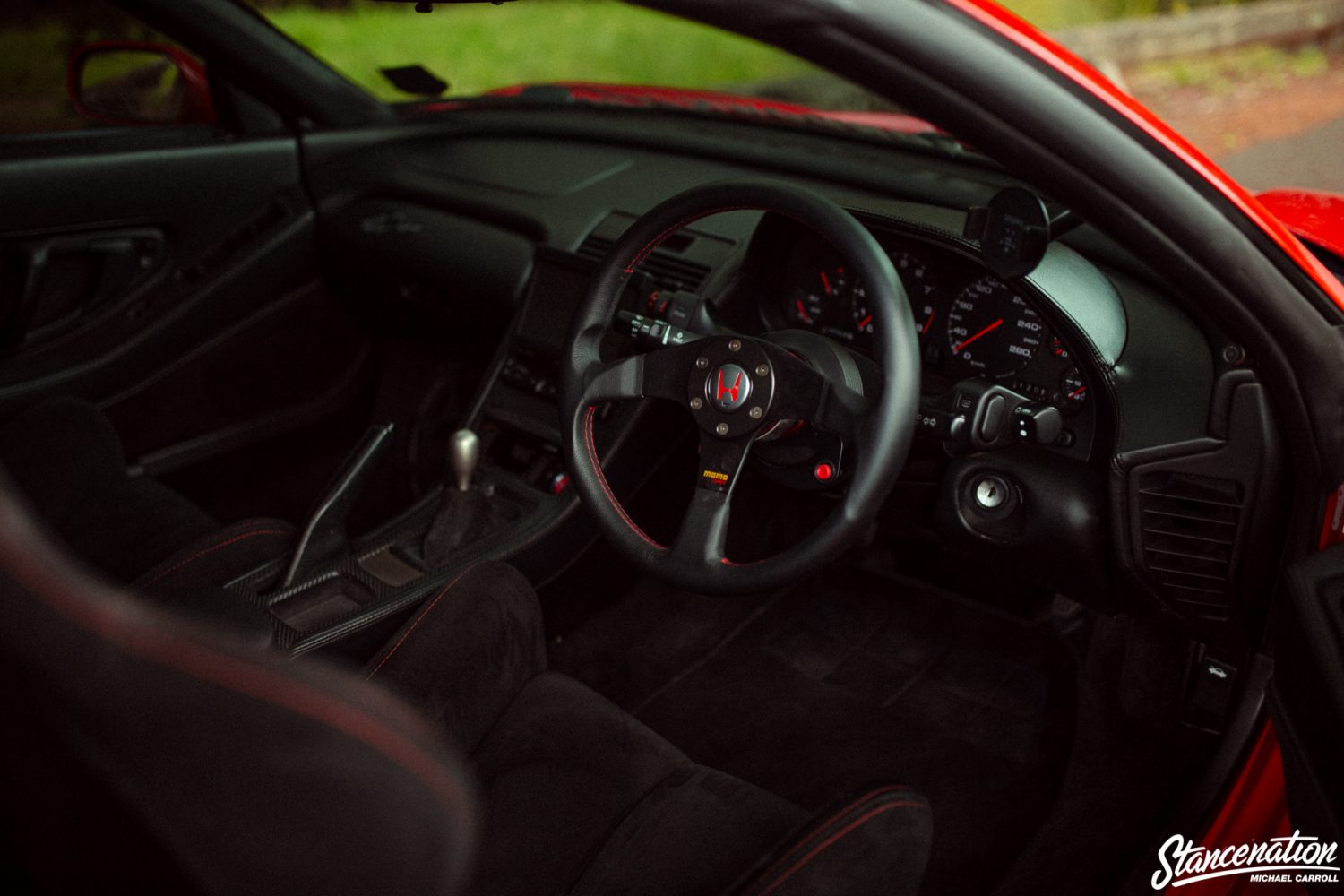 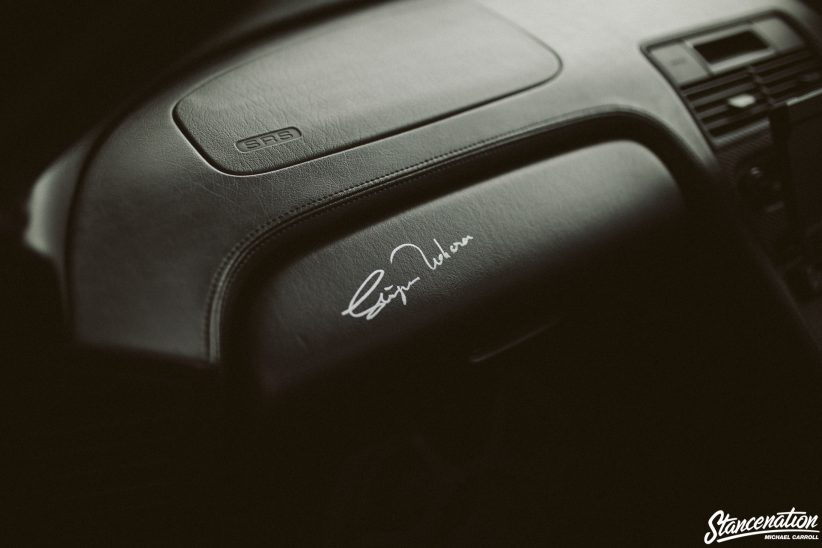 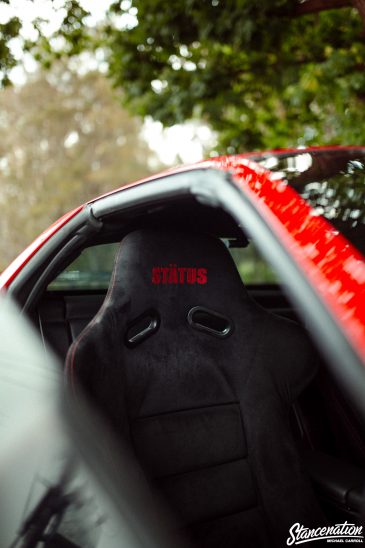 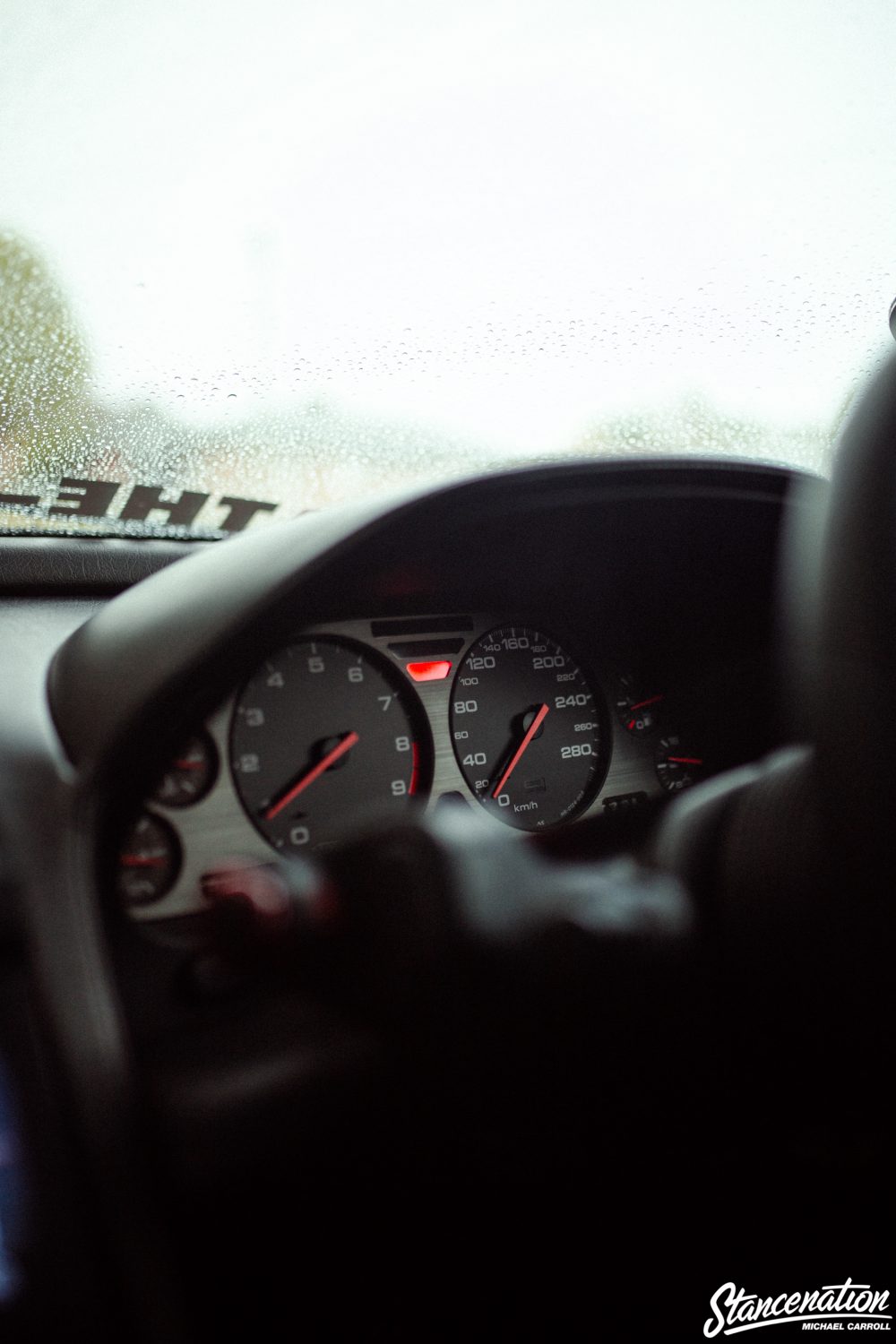 The key to a perfect car in my mind starts with the platform and choice of modifications, but it’s the attention to details and flawless execution that makes this car the cream that rises to the top. The tasteful aftermarket modifications, stunning craftsmanship and composition, and tributes to racing and automotive history makes this one of the most memorable cars and write ups I’ve ever encountered. 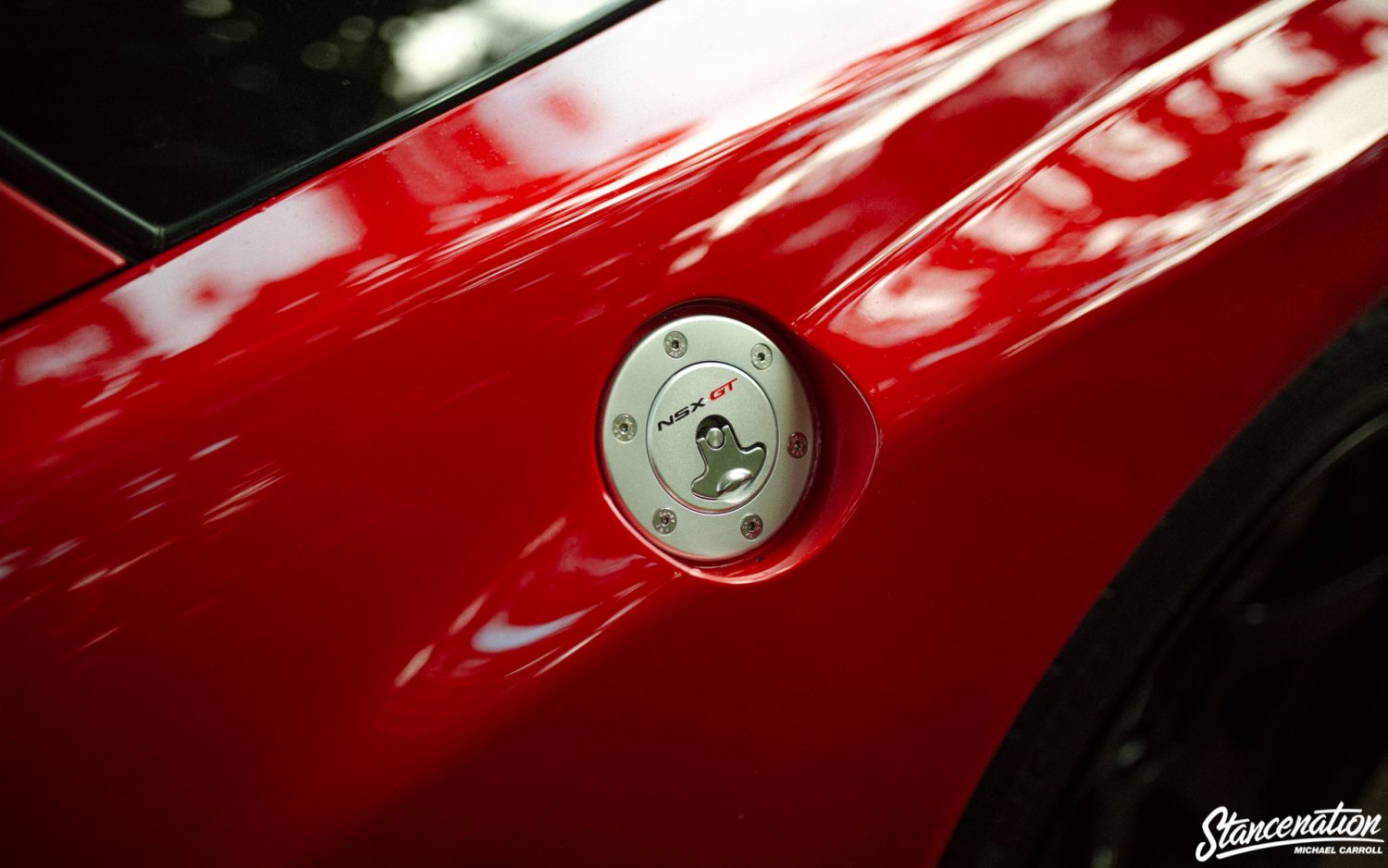 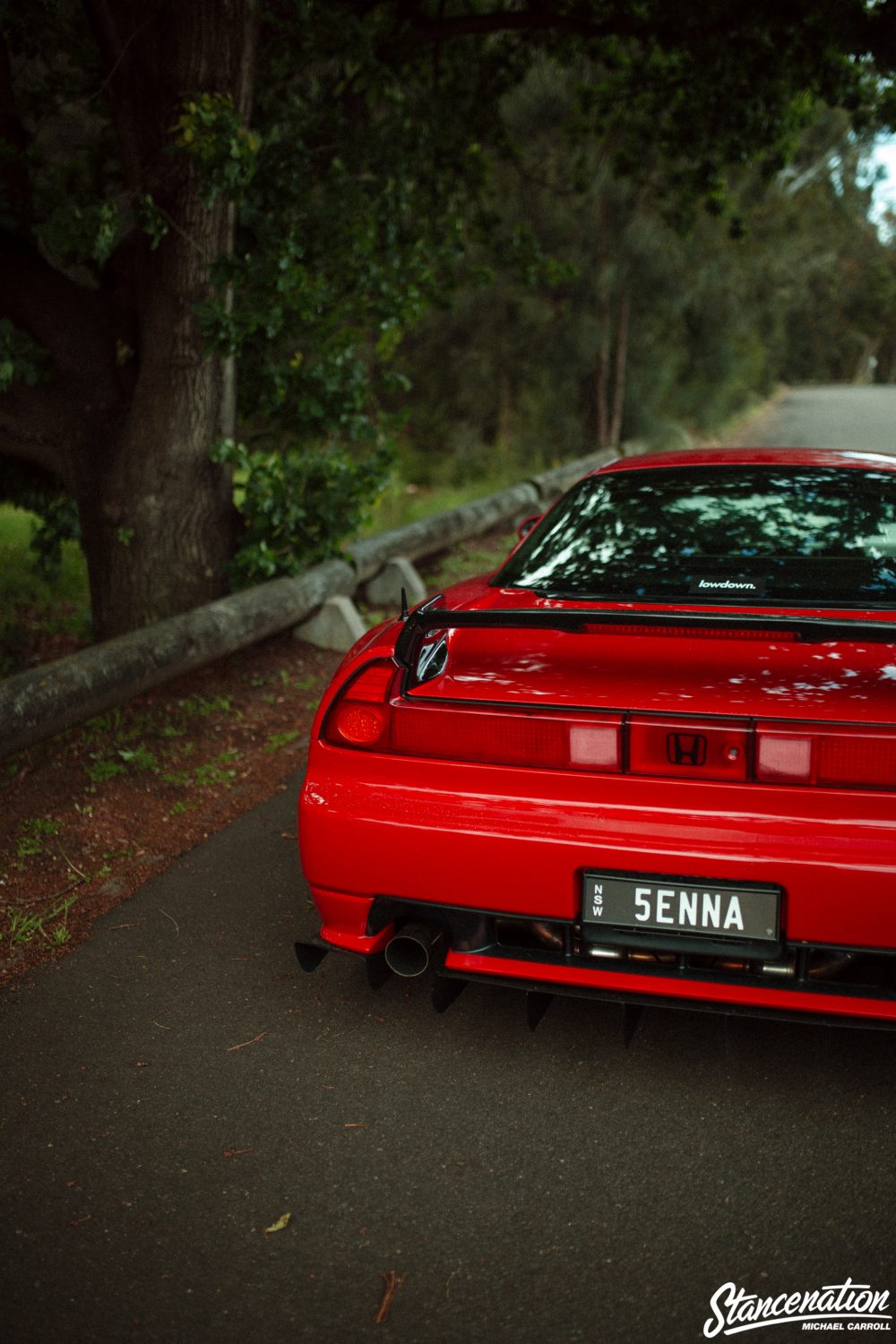 Bathed in such a beautiful red, I can’t help but think of why it’s my favorite color. The power, passion, and energy it evokes is commanding and eye-catching, but it also the symbol of luck in Asian culture, and with the Lunar New Year passing, I can’t help but look at this impressive NSX and think to myself, “Damn the owner must be really happy and lucky”. A big thank you to Michael Carroll for these incredible shots of one of my favorite cars in the perfect color combination. 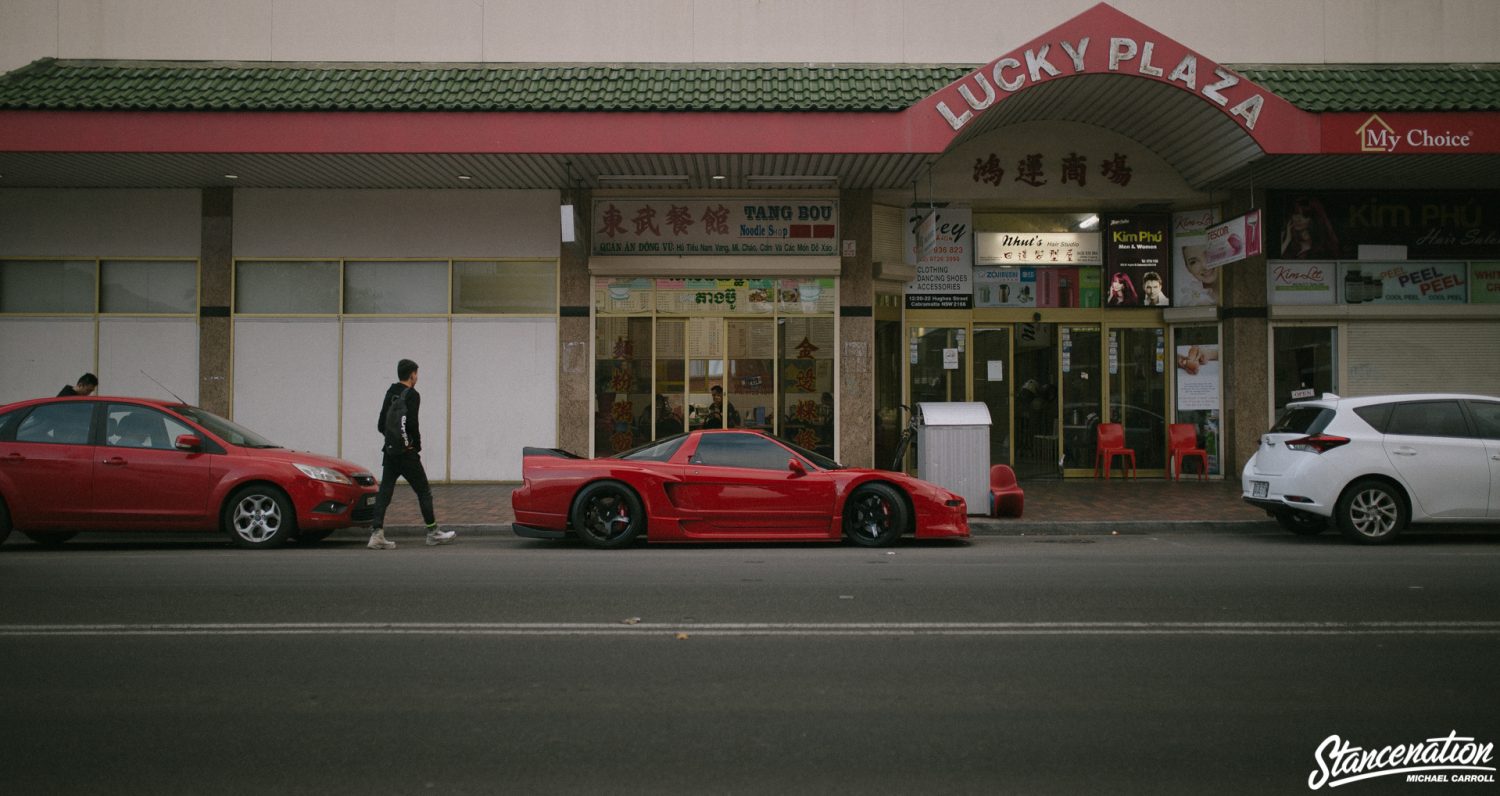 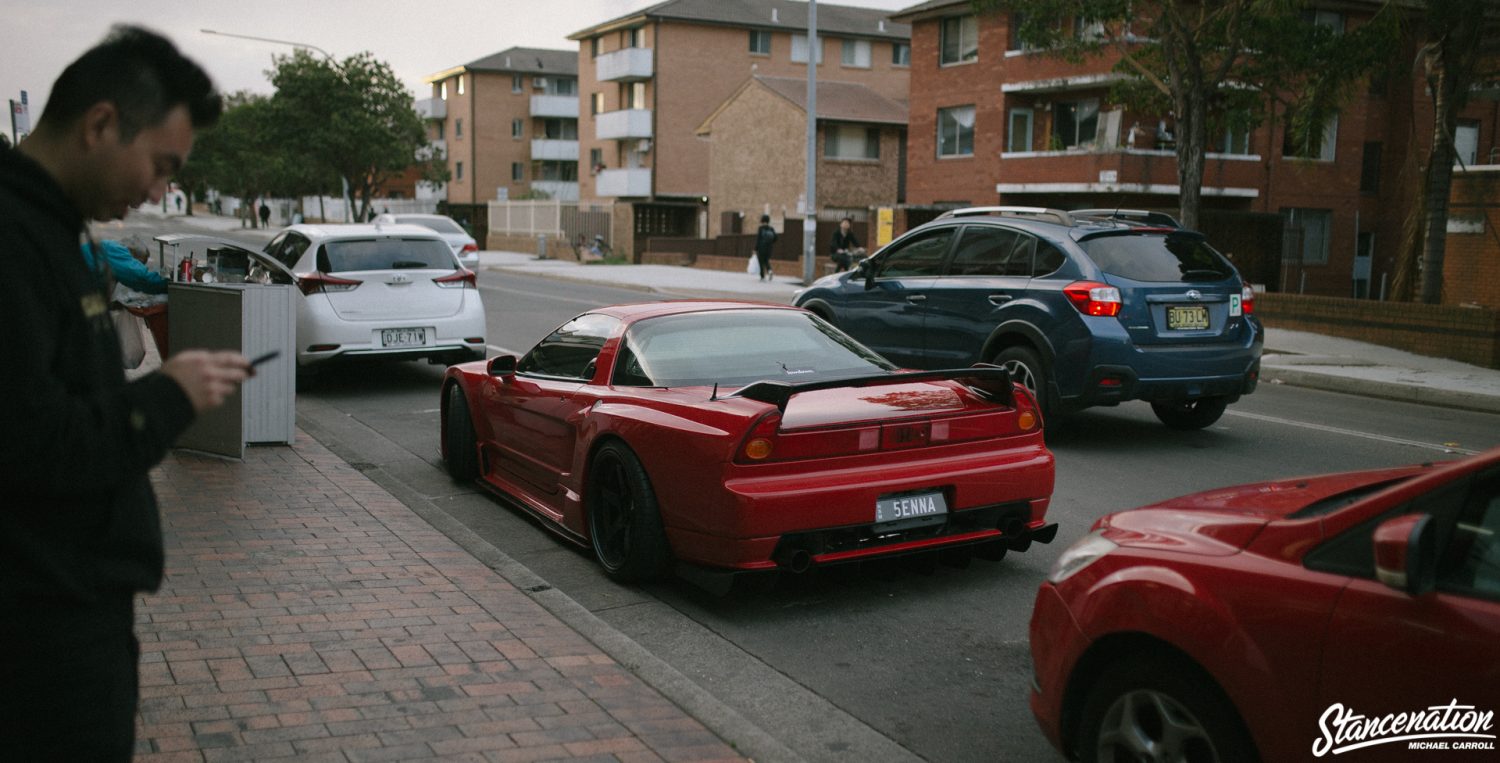 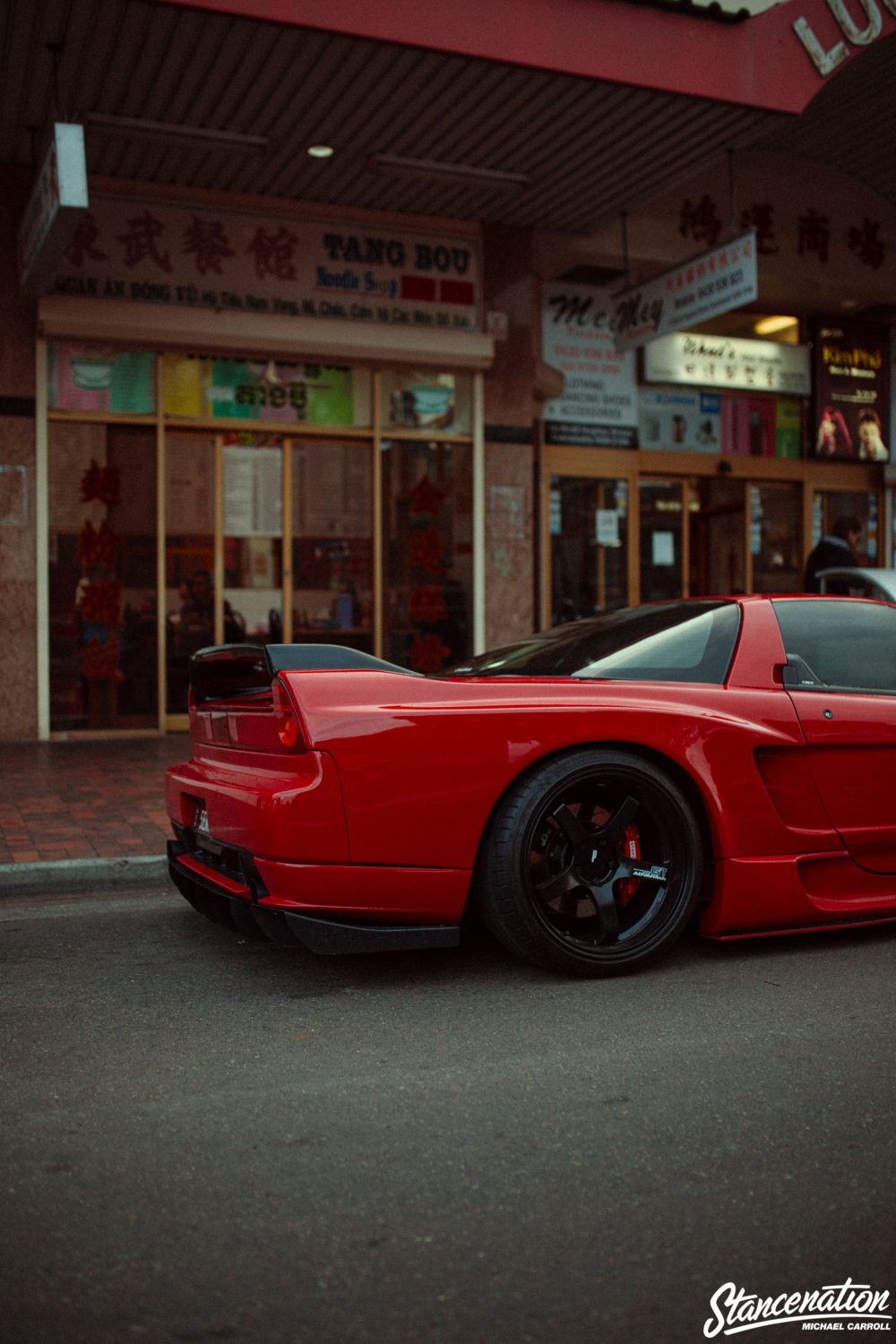