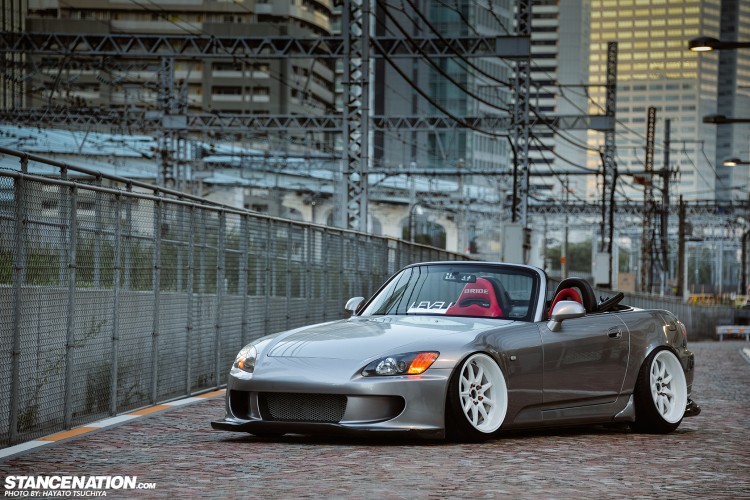 The old saying “the grass is always greener on the other side” has possessed a significant meaning for import enthusiasts in North America for quite some time.  Of course, the fence to the neighbors yard is rather large and blue and we commonly refer to it as the Pacific Ocean.  For years, especially the late 90s into the early 00s, enthusiasts drooled over the Japanese automotive world and sought to replicate the style found there.  Many people did an incredible job, with North Americans going as far as to import window glass.  Some feel that it went a little too far and that misconceptions created some interesting trends, but I digress.  Unbeknownst to a majority of the Western hemisphere, an equal reaction was brewing in Japan. 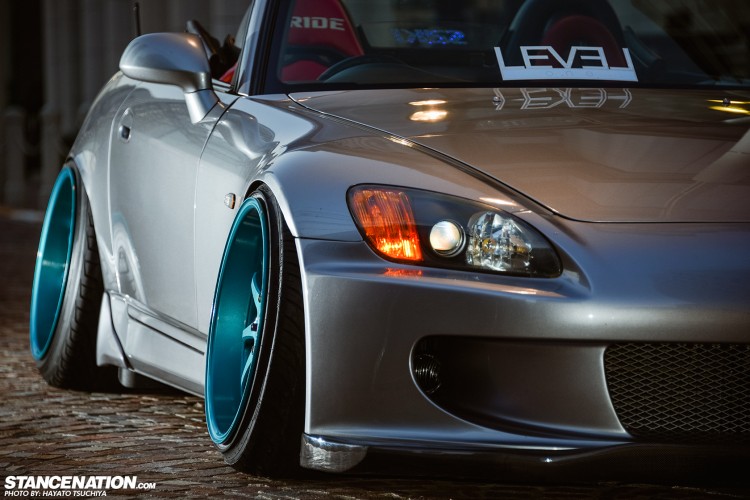 Thanks to online interaction and media the ‘USDM’ scene of Japan has brought itself to the attention of enthusiasts around the world.  While we were busy obsessing over the things they had — they were doing the same for us.  Our grass was pretty awesome when viewed from the other side of the Pacific it seems.  Hiroki Matsuo of Saitama, Japan is one of those Japanese individuals with an affinity for ‘USDM’ and displays his interpretation of the style with his insanely low Honda S2000. 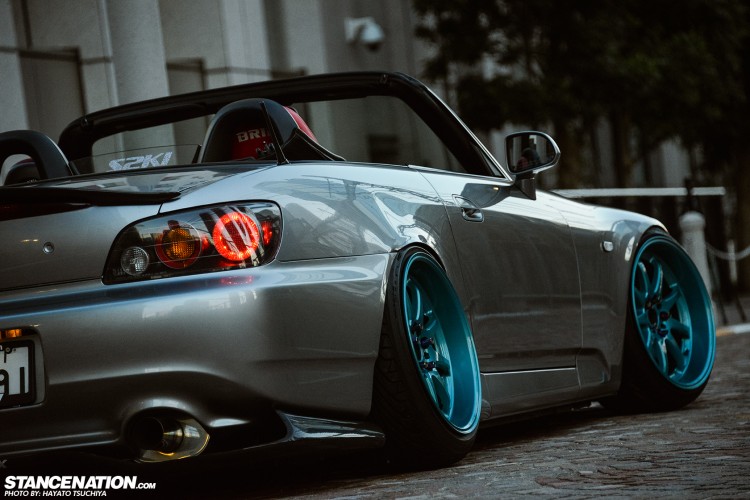 Avid StanceNation readers are already well aware of my affections for the S2000.  The roadster celebrates the soul of Honda.  Maybe it’s the freedom of a roofless drive, the hyper-responsive chassis, or the high specific-output engine with its famous stratospheric redline that touches my heart.  Most likely its the balance found in the combination of the S2000’s many qualities that make it such an enjoyable car for me.  Aesthetically the aggressive,  long fenders that culminate at the pointed nose of the car are offset by the high haunches of an abbreviated trunk line and match the character of the car perfectly. 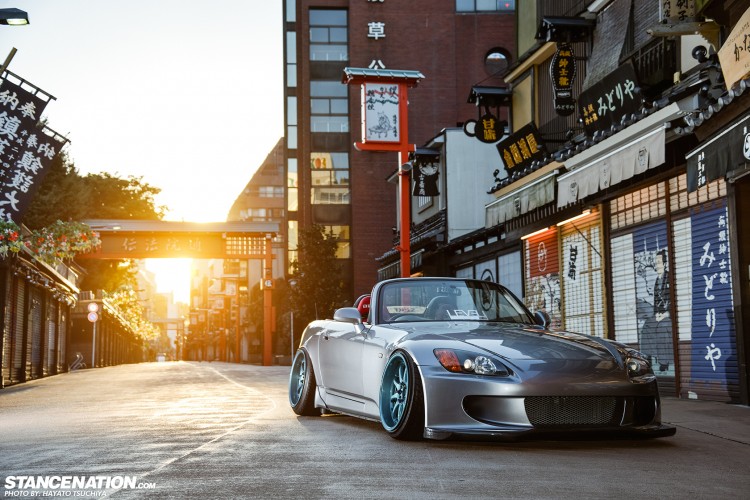 While my personal S2000 remains mostly stock and finds its purpose between the cones of an autocross course, Matsuo’s roadster is an exercise in stylistic expression.  Obsessed with American cars such as the Corvette, Viper, and Charger from a very early age his interest moved to domestic (Japanese) cars as he grew older and realized the cars from his homeland were much easier to obtain and are fun while remaining economical. 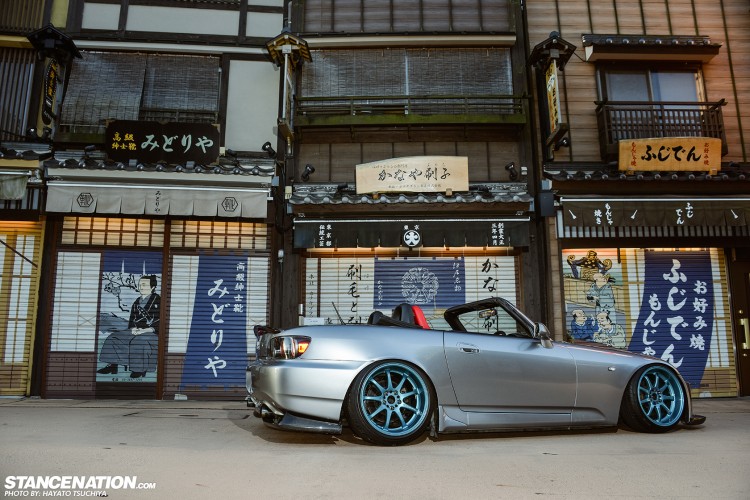 The naturally low, wide lines of the S2000 have been amplified to fit Hiroki’s tastes.  Renowned S2000-tuner ASM provides the front end that is matched to the remainder of the car with OEM side strakes and a Voltex rear diffuser originally intended for an EVO.  Along the decklid above the AP2 rear bumper is a subtle Veilside trunk spoiler.  USDM lighting, the headlights from an AP1 and taillights from an AP2, are requisite items for a proper USDM enthusiast.  The ASM front end is currently being replaced by a USDM AP2 front end. 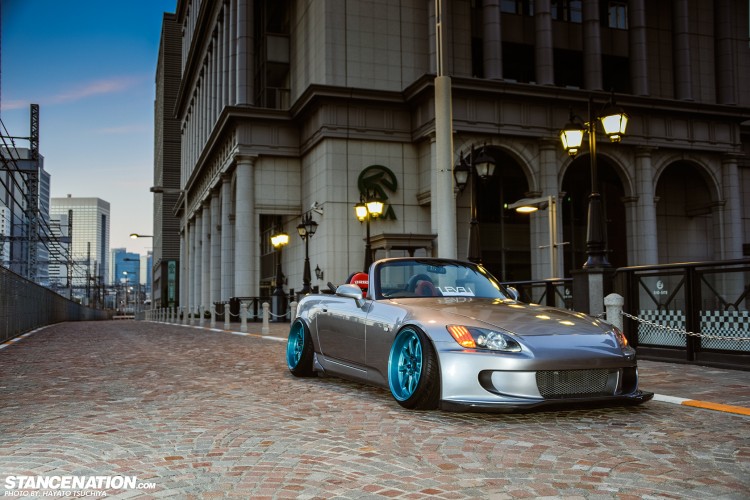 Hiroki’s Ap1 crouches close to Japanese streets with Racing Gear JTC N1 dampers fitted with KYB springs with ridiculously stiff rates (24k/22k).  Incredibly high spring rates keep the aggressive Work Emotion XD9s out of the S2000’s delicate fenders.  A considerable fender pull brings those fenders around the 18×10″ wheels, specified at +18 ET in the front and +3 in the rear.  Matsuo took it upon himself to paint one pair of the wheels a custom teal hue in stark contrast to the white hue found on the other side of the vehicle.  It creates a unique look that is entirely dependent on the viewer’s position relative to the car itself.  The grass is greener on the other side… and so are the wheels.  An even larger set of Work Meisters are already in possession to replace the Emotions so expect a different look the next time this S2000 pops up. 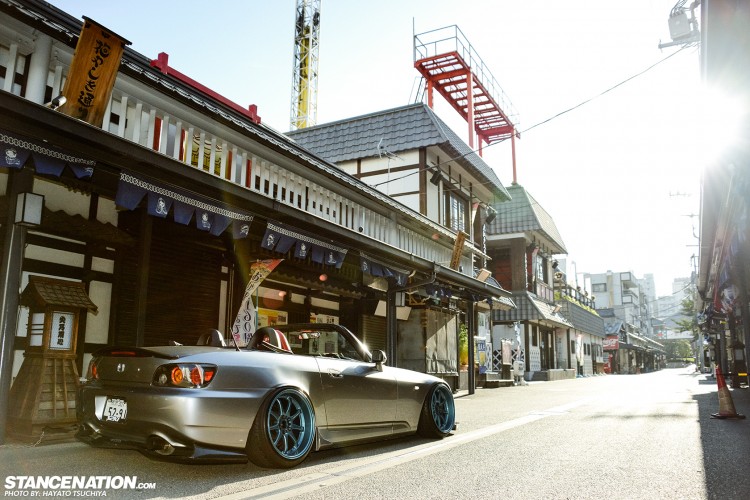 The F20C is complimented with an AEM intake and exhaust products from Mugen, Spoon, and ASM.  A clutch and flywheel from Spoon Sports provides positive engagement when Hiroki snaps through the 6 cogs from the comfort of a Bride Ergos 2 seat.  USDM interior bits are sprinkled throughout the tight cabin of his S2000, such as a console and visors.  Of course, Nardi is the steering wheel of choice with a Rally unit in this particular car. 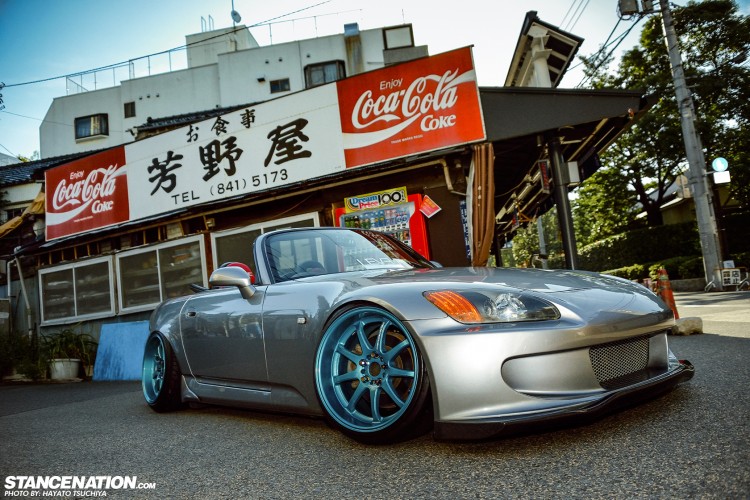 The LEVELONE banner may be slightly confusing for some viewers.  LEVELONE is a North American car club, that is quite well known for their quality builds.  Hiroki also took notice of LEVELONE and through networking established the Japanese chapter of the crew.  Originally an all S2000 club in Japan, they have since expanded to include several other makes and models.  Matsuo speaks of his crew proudly, a sentiment that carries with it a warm feeling of international connections forged through common interest. 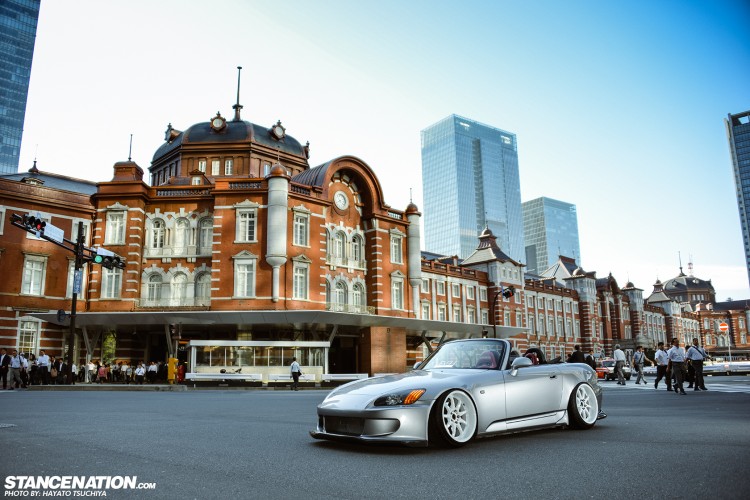 It is quite possible that the grass is just as green on each side of the pond.  While certain things may be more common here or there the commonality found in the automotive passion is impossible to ignore.  Self-expression and the allure of motoring culture is a universal concept.  Both here and everywhere else in the world there are enthusiasts that draw inspiration from the “grass” and they want their car in the weeds.  Hiroki and LEVELONE Japan have made their individual marks while simultaneously connecting with a community on the opposite side of the world — and it all began with his extra-low S2000. 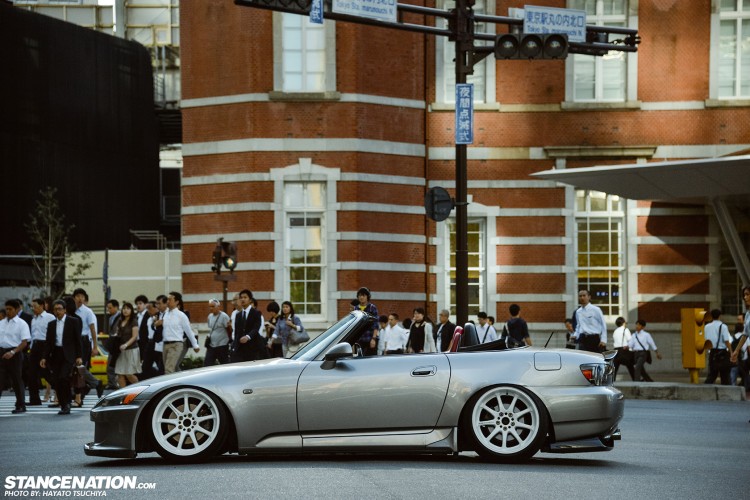 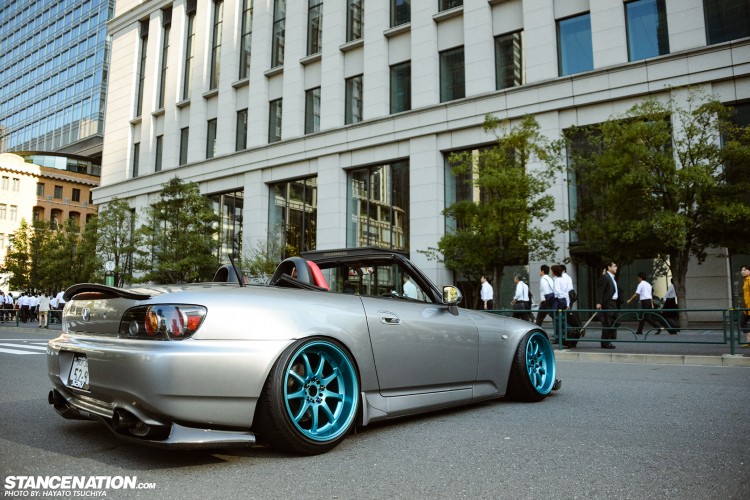 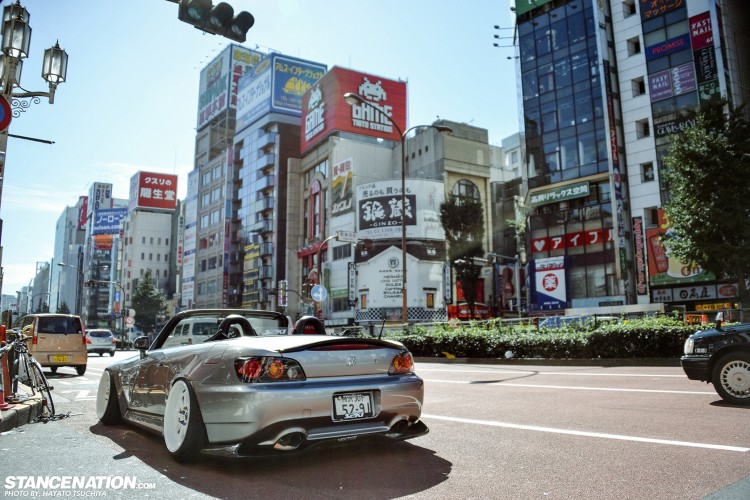 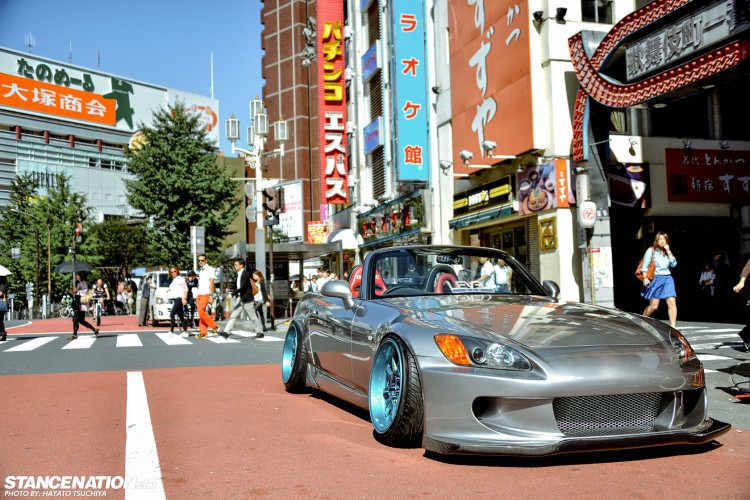 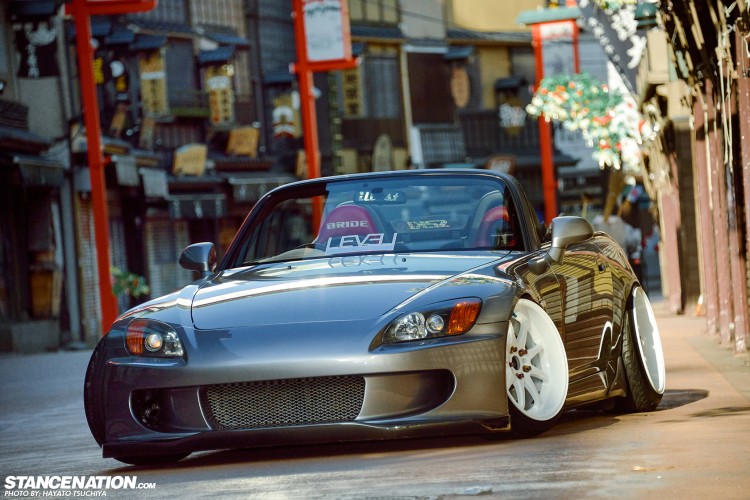 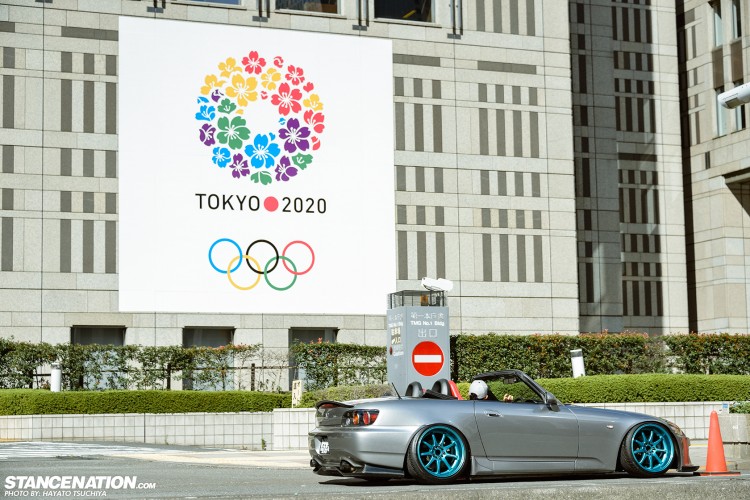