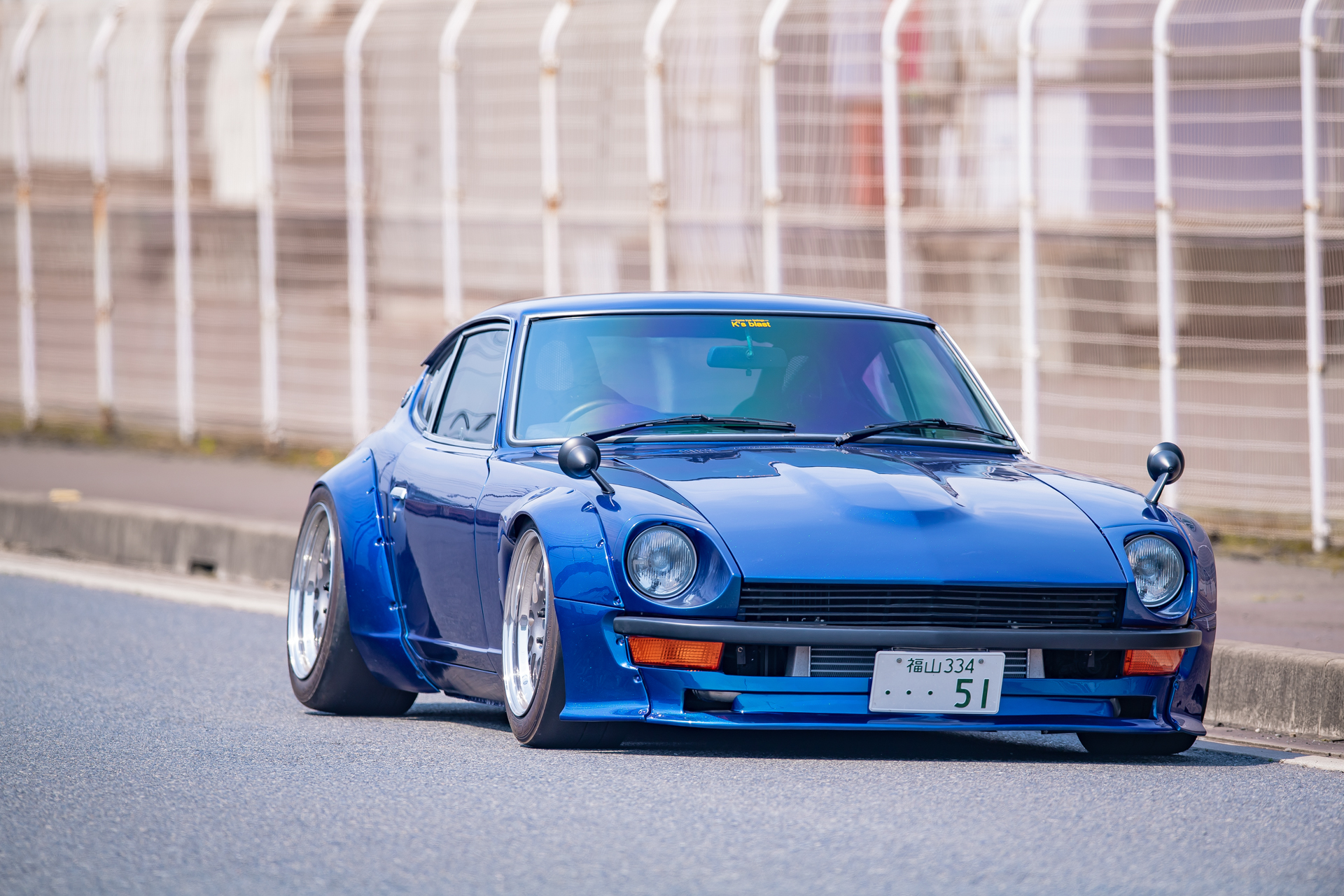 The year is 2018.  Humans have surpassed the challenge of aging and have learned to incorporate modern technology into aging bodies making them better than ever… Okay so this isn’t Popular Science; this is StanceNation so I’m obviously talking about cars and not human cyborgs.  Though, admittedly that would be pretty flippin’ sweet. 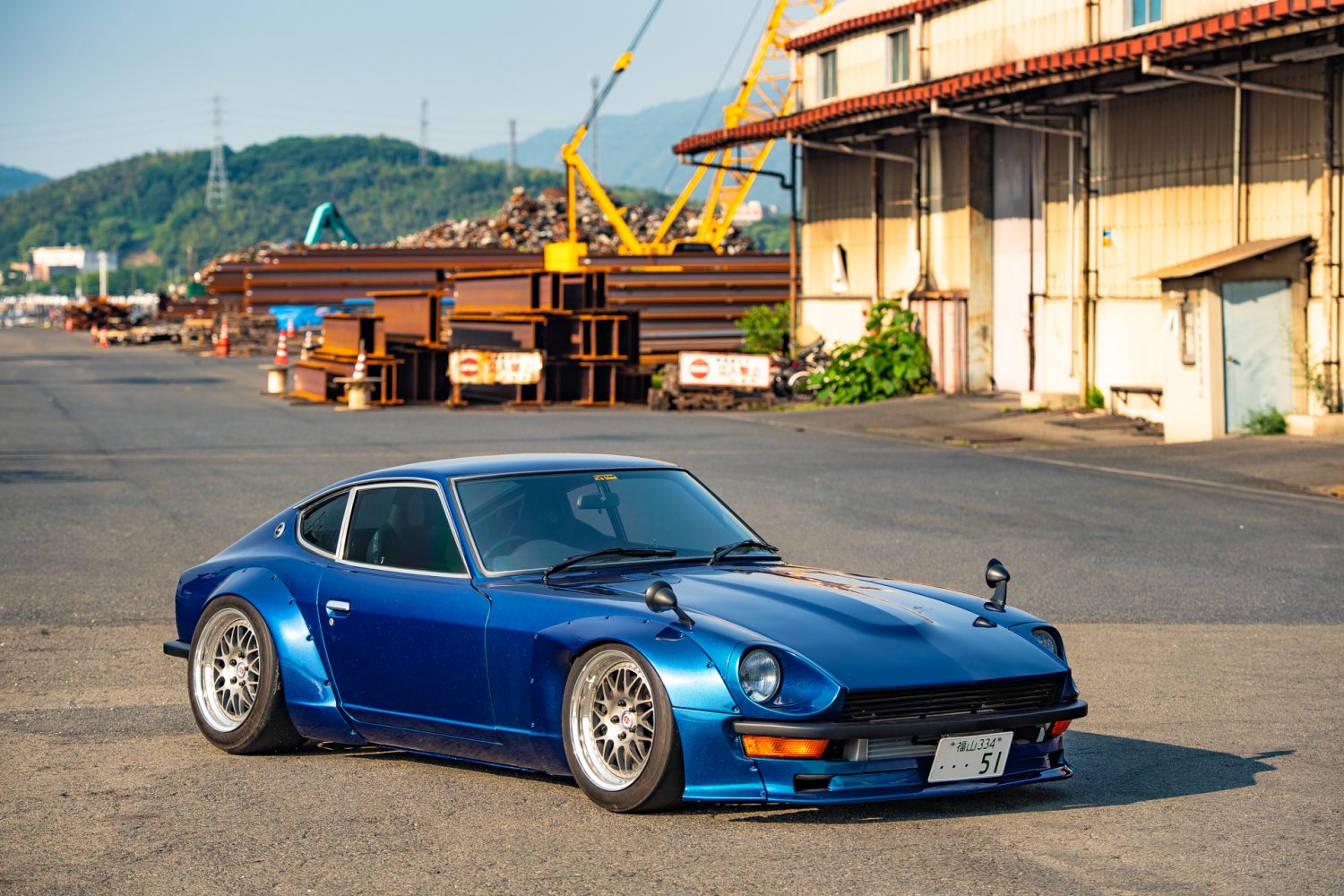 People have been doing the resto-mod thing for a while throughout the broad spectrum of automotive genre.  The allure of classic styling infused with the usability, reliability, and performance of modern vehicles has drawn in many automotive enthusiasts. 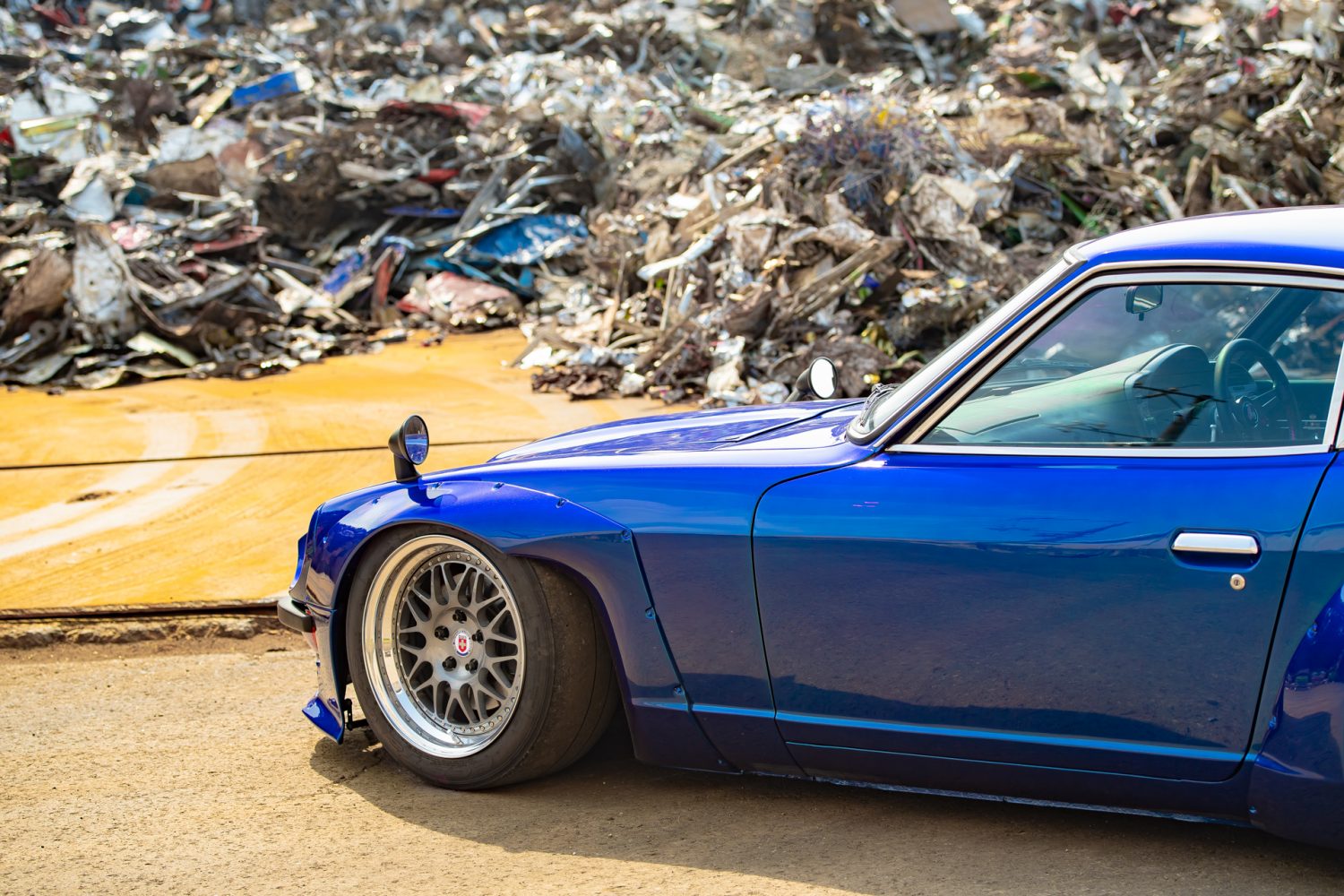 When I first laid eyes on Kiochi Kanoe’s S30 Z car I was instantly intrigued.  I’ve always felt that the chassis was one of the most attractive designs in history.  The Z’s the long hood, sweeping lines, aggressive haunches, and abbreviated derrière scream “SPORTS CAR!” louder than swaths of Top Gear BBC fans can enthusiastically belt “POWEERRR!” at every given opportunity. 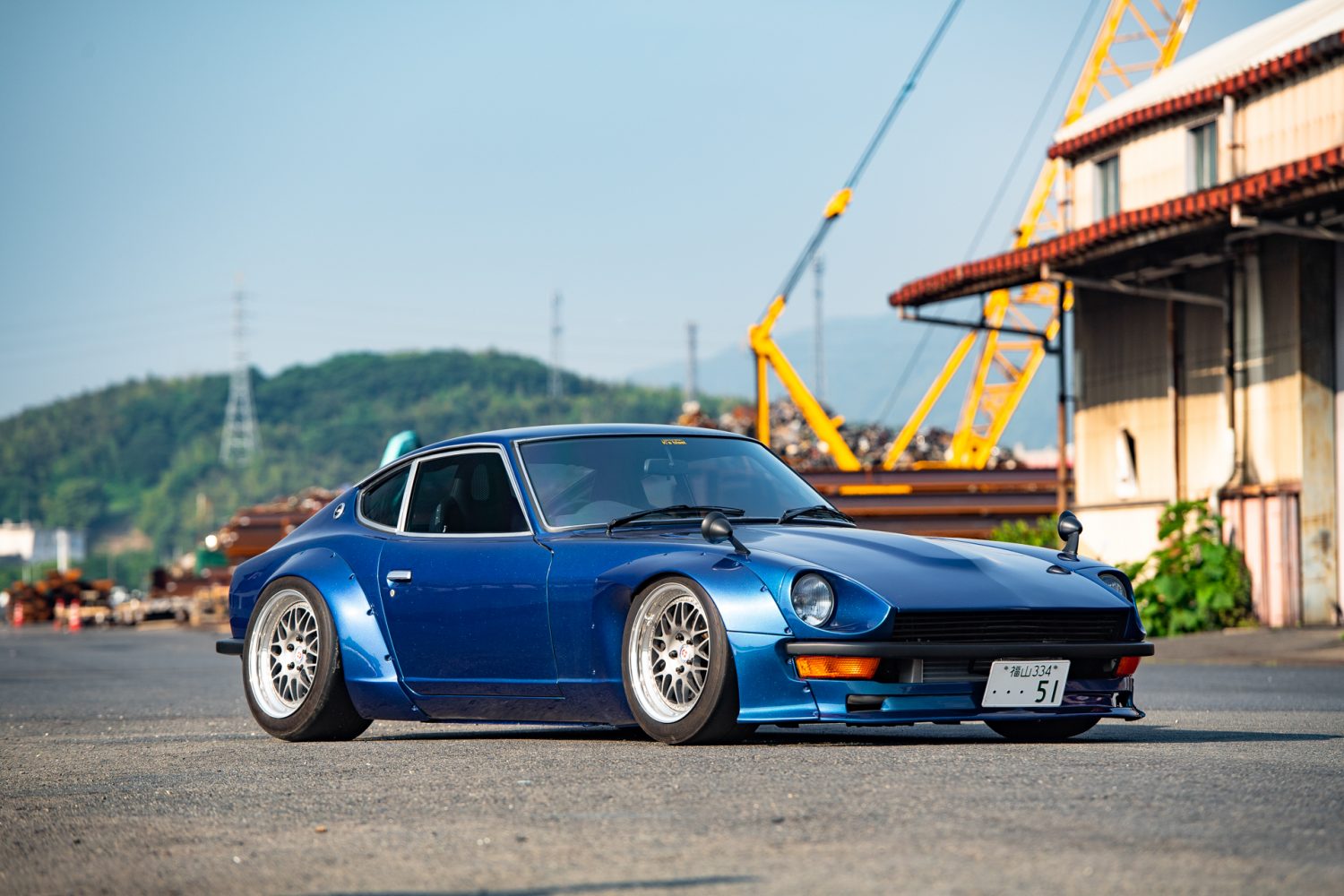 The overall styling of the era means fender flares flow naturally instead of looking like awkward add-on pieces and the front-engine, rear-wheel-drive configuration means that powertrain options are only limited by the builder’s budget and creativity. 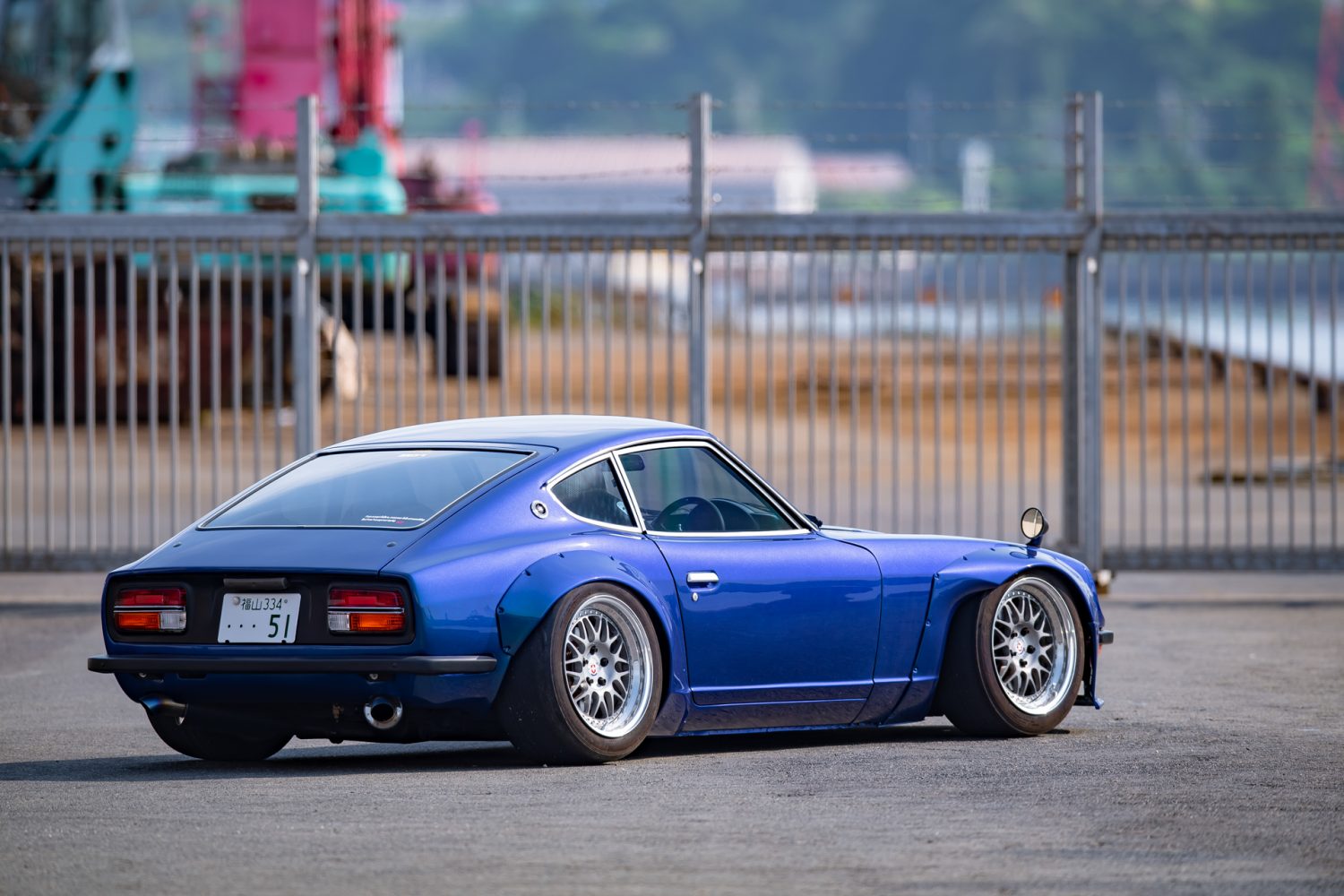 The exterior of Kiochi’s S30 follows a classic formula of fender flares and an aggressive front air dam. The natural beauty of the Z requires little improvement. The aero components from K’s Blast look phenomenal. Fender-mounted mirrors, of course, always earn a nod from period enthusiasts. The impeccable bodywork and overall execution of the exterior modifications suggest that a high-level of build quality will be found throughout the car. 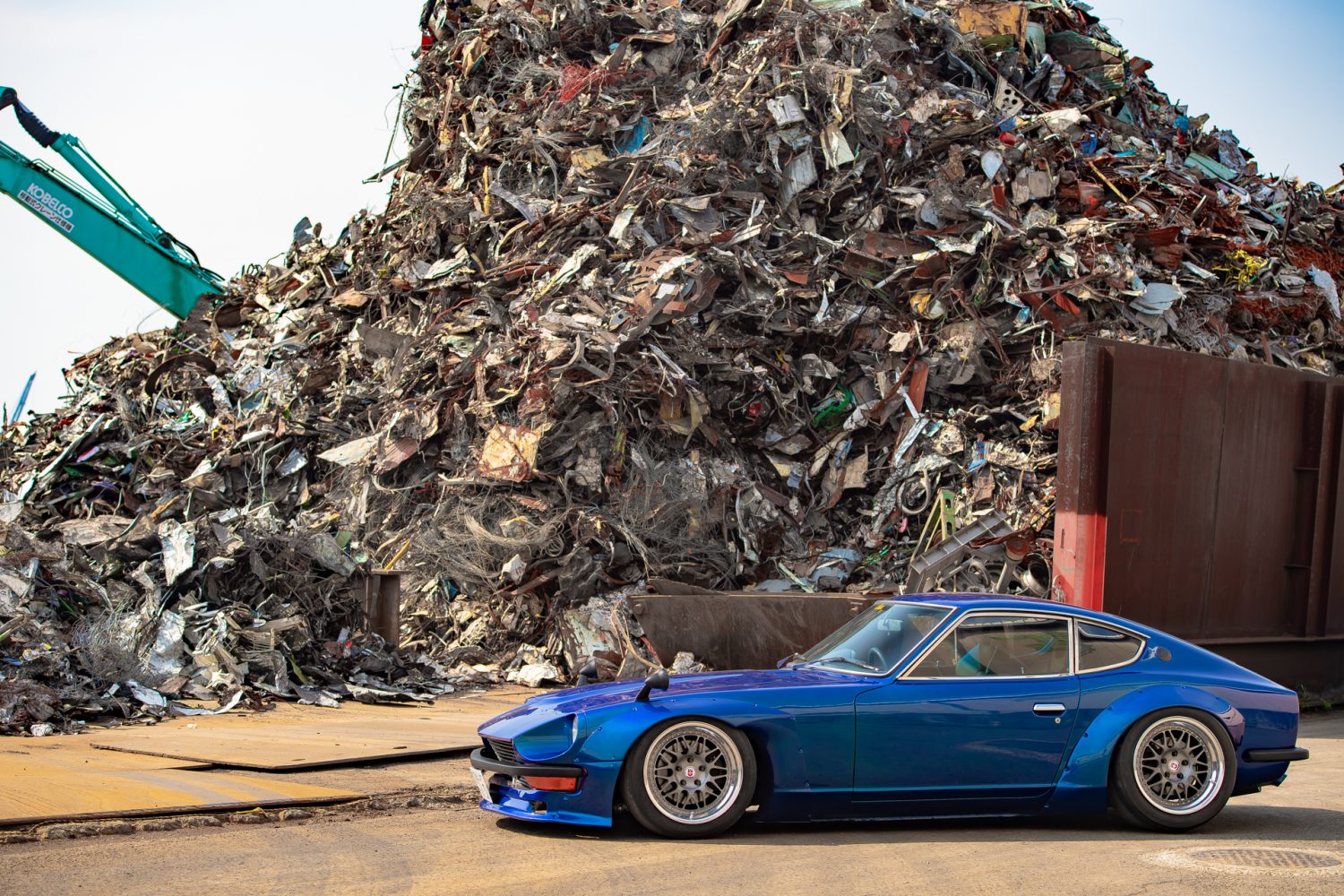 The HRE Classic Series line of wheels pays tribute to some of the brand’s most memorable wheel designs; albeit built with modern standards of strength, weight, and fit. So these HRE Classic 300s fit perfectly, pun intentional, on Kiochi’s Z. Astute readers will take notice of the race-compound Kumho tires that hint at particular level of performance available to driver’s of the Z car. The aggressive stance is user-adjustable via a custom air suspension. 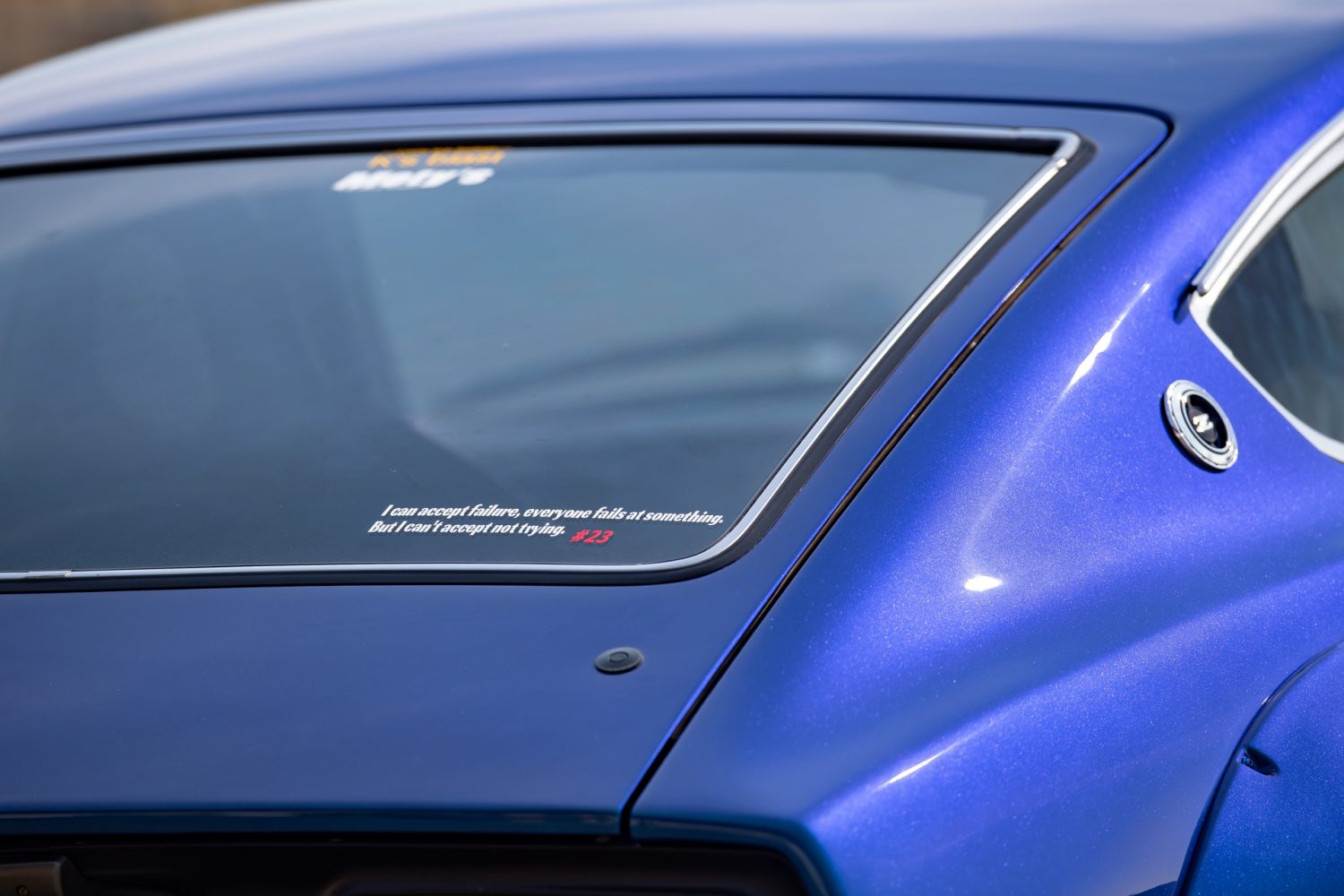 The aforementioned FR-layout of Nissan/Datsun Z cars along with the aforementioned long snout means the chassis accepts a multitude of engine options. Chevrolet V8s of nearly any vintage and modern Nissan or Toyota turbocharged inline-6s are common swaps. Judging the book by its cover I personally expected to see an RB valve cover nestled between the strut towers… 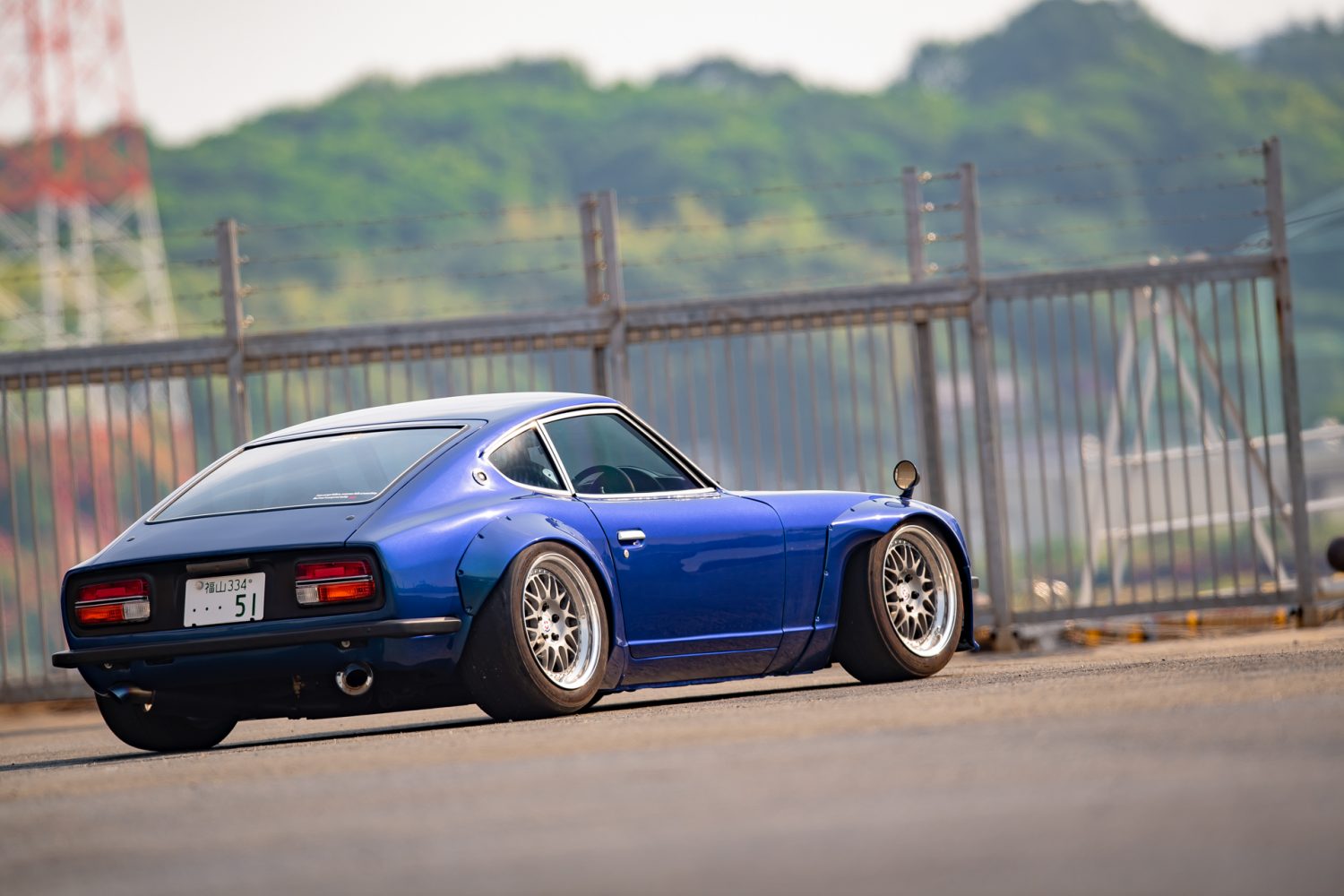 …and then it hit me. Hard. In an intense situation of BUT WAIT, THERE’S MORE I first noticed the use of Honda’s potent F20C powerplant.. and then the HKS Rotrex supercharger.. The HKS blower augments the 120hp-per-liter Honda mill well, producing useable power without affecting the high strung character of the hyperactive four-banger 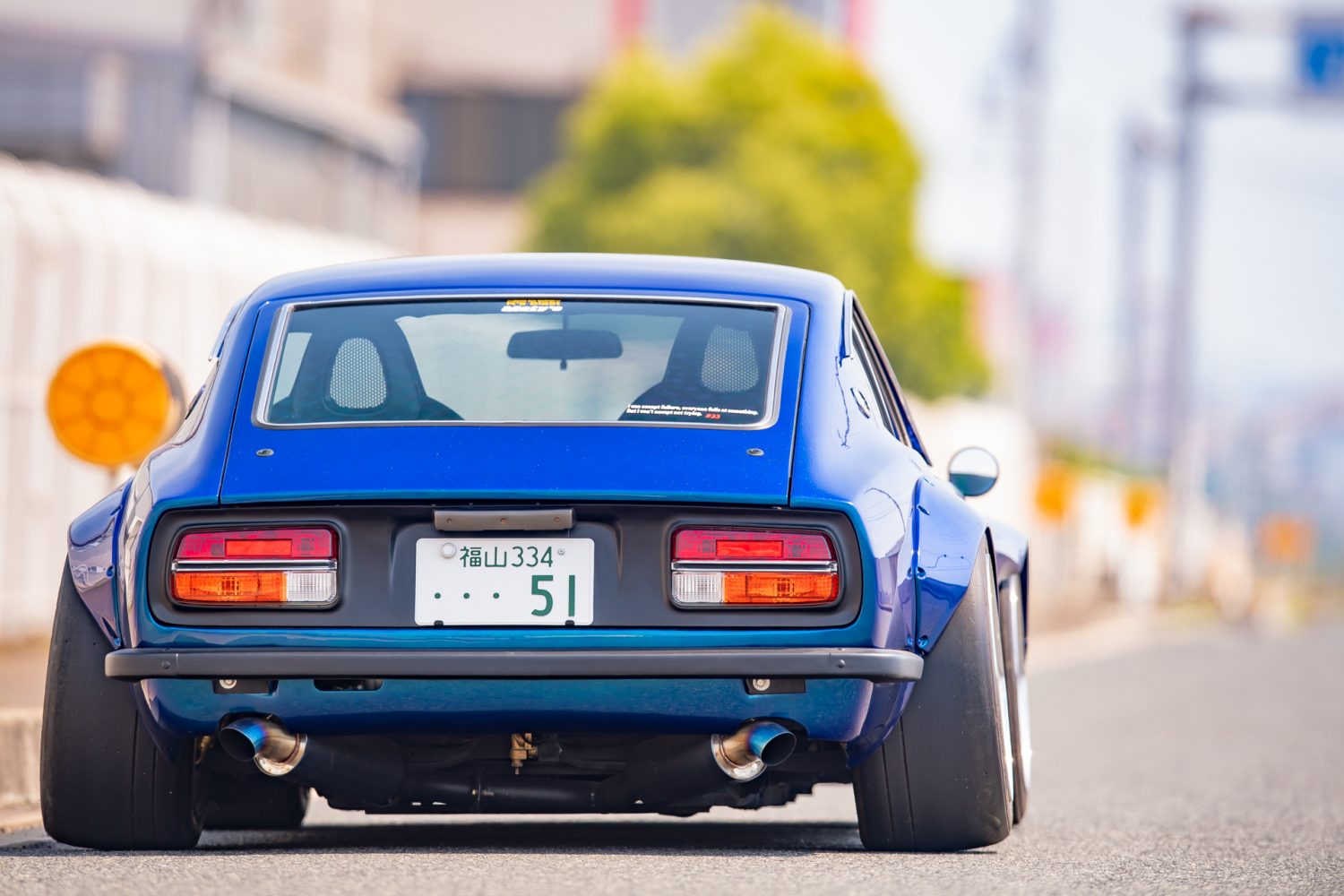 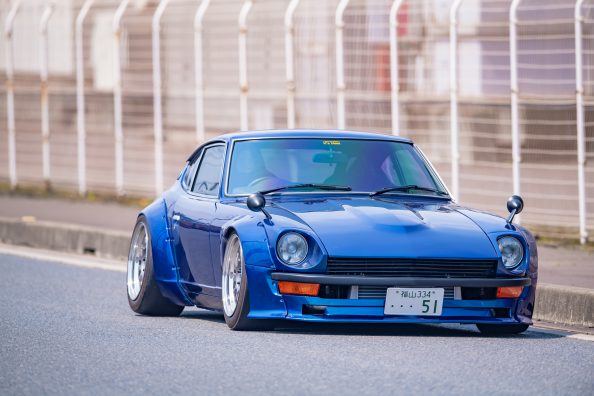 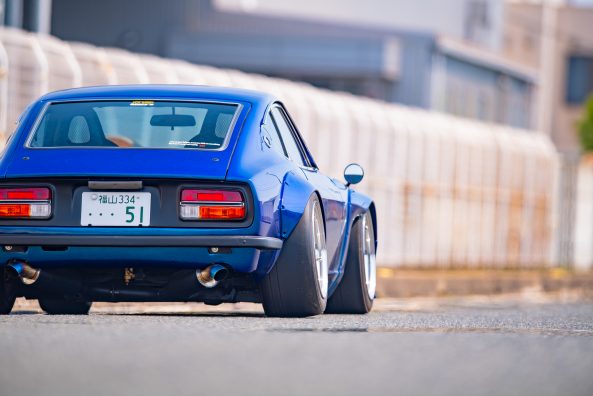 So there wasn’t a Nissan engine beneath the strut towers. Neither was there a Chevrolet engine. Neither were there strut towers. Further inspection of the engine bay shows the nearly OE look of the installation. Look closely. The S30, like all Z-cars, was designed with a popular MacPherson-strut type front suspension. The Honda S2000, from which the F20C engine was pulled from, was designed with Honda’s state-of-the-art double-wishbone suspension. The factory-like appearance of the engine bay was not only a product of the professional work performed on the vehicle – it was practically an S2000 engine bay. Everything has been converted. 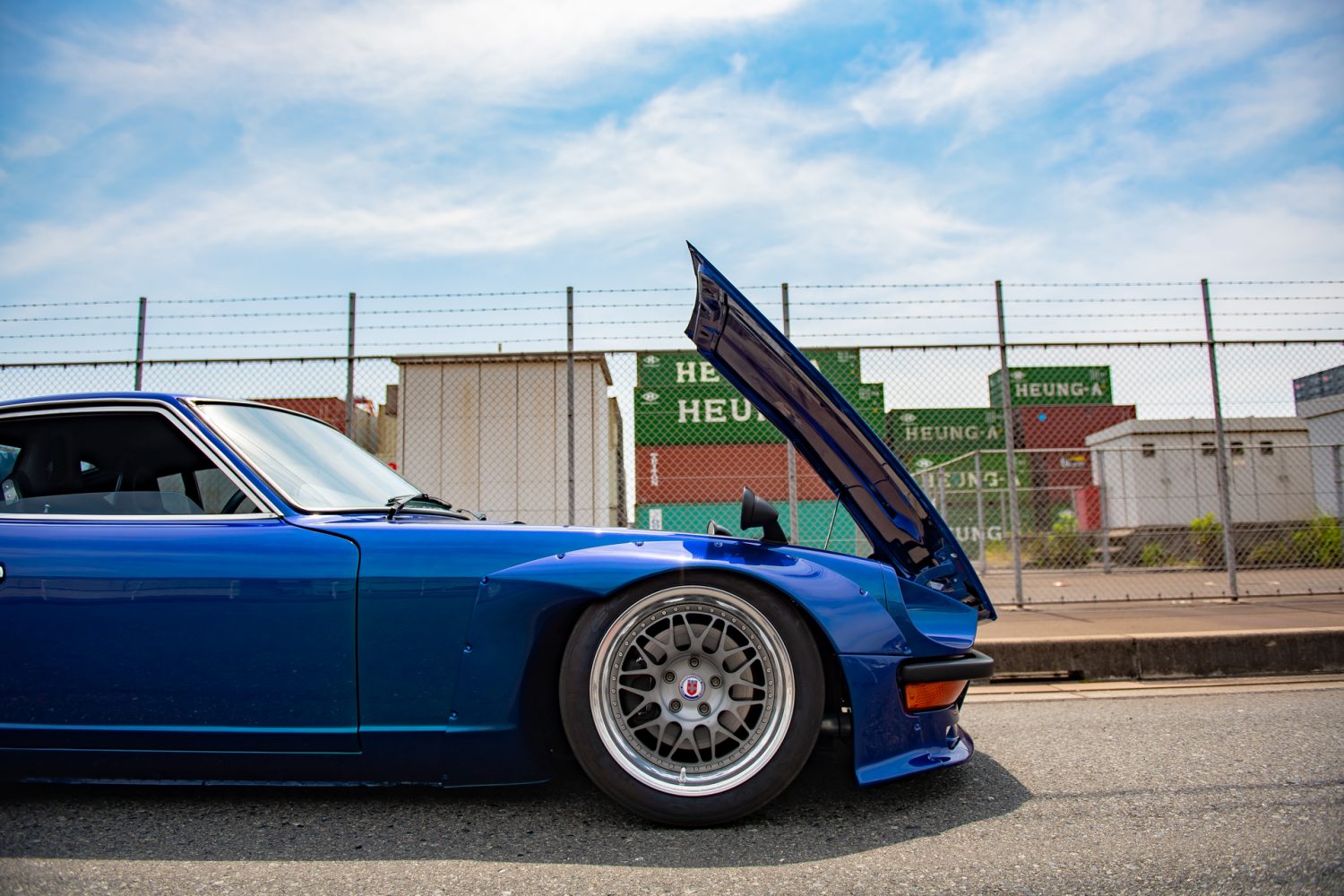 Not only did Kiochi decide to utilize the F20C. The S2000 is recognized by most auto enthusiasts as a front-runner in modern sports car driving experiences. Taking this knowledge into consideration, Kiochi decided to utilize nearly every mechanical component from Honda’s modern roadster. The engine, transmission, differential and full suspension — including the electric power steering, and brakes were all pulled from the donor S2000. Even the seats, console, and dashboard (including the signature S2000 digital cluster) are pulled from an S2000. The vehicle is basically an S2000 dressed as a classic Datsun. Mind. Blown. 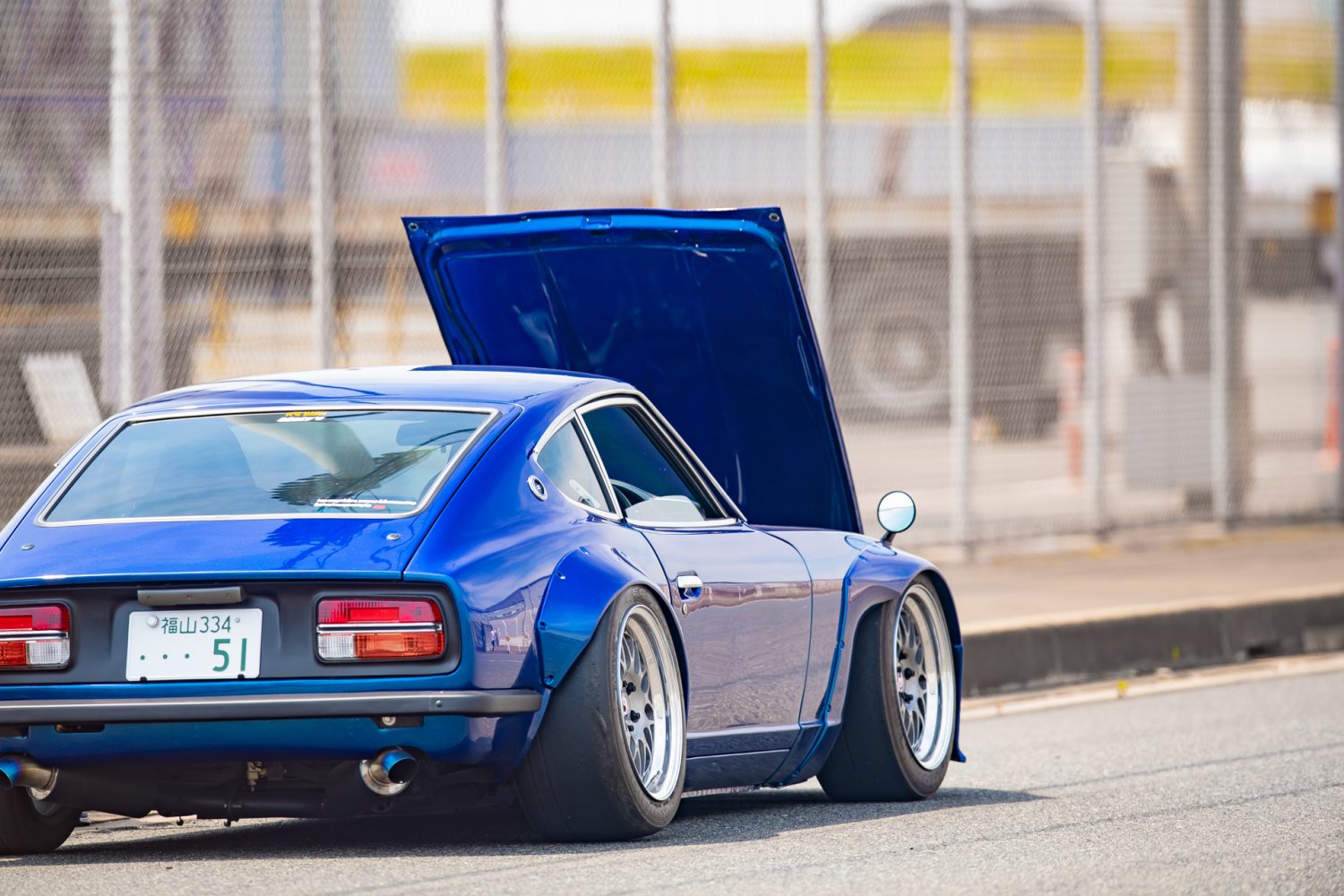 Kiochi says that the use of mostly S2000 components allows for easier maintenance and repairs. Instead of having to manufacture one-off components mainly factory components were utilized in the project; making it more useful as a street machine rather than a full-tilt custom race machine. Wow. Despite challenges around every corner, Kiochi pulled off a truly insane project. He tells us his favorite part about the car is that a car nearly half a century old now operates at a modern level of comfort and performance. 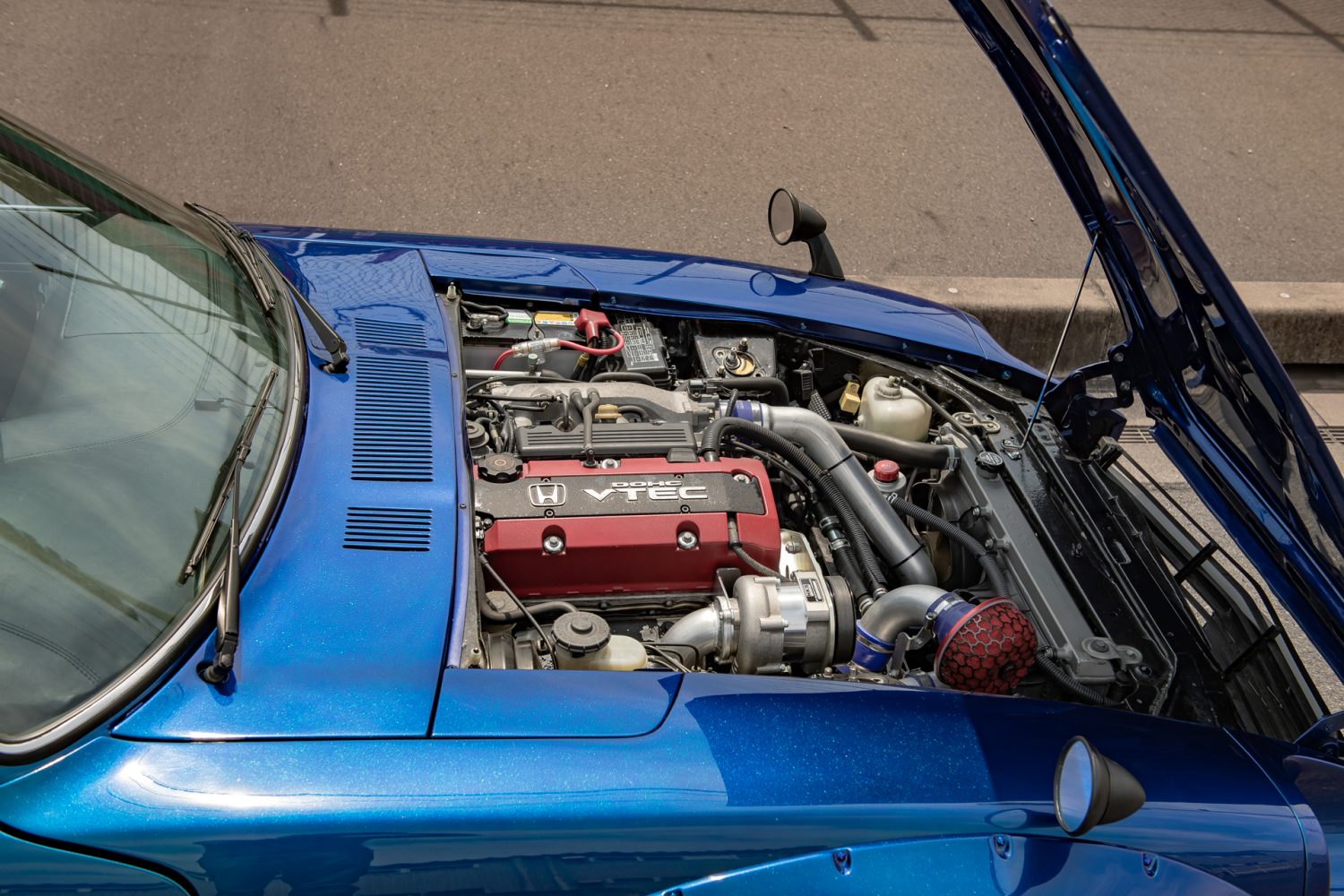 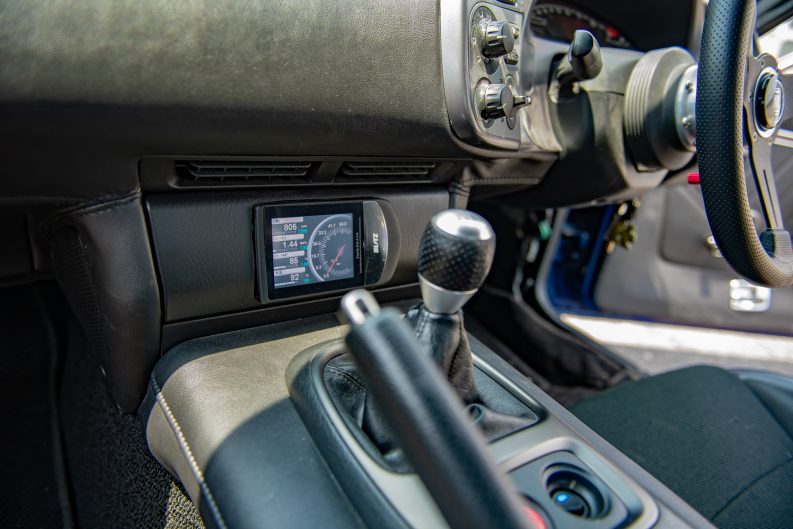 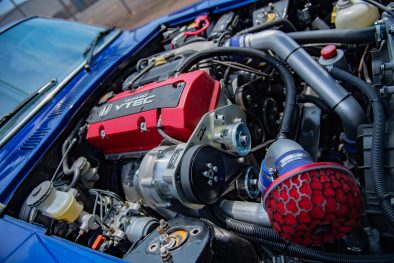 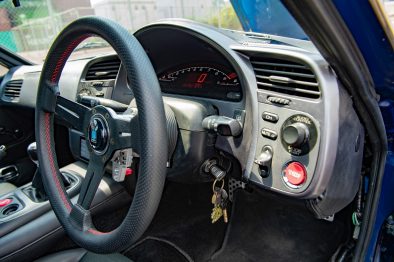 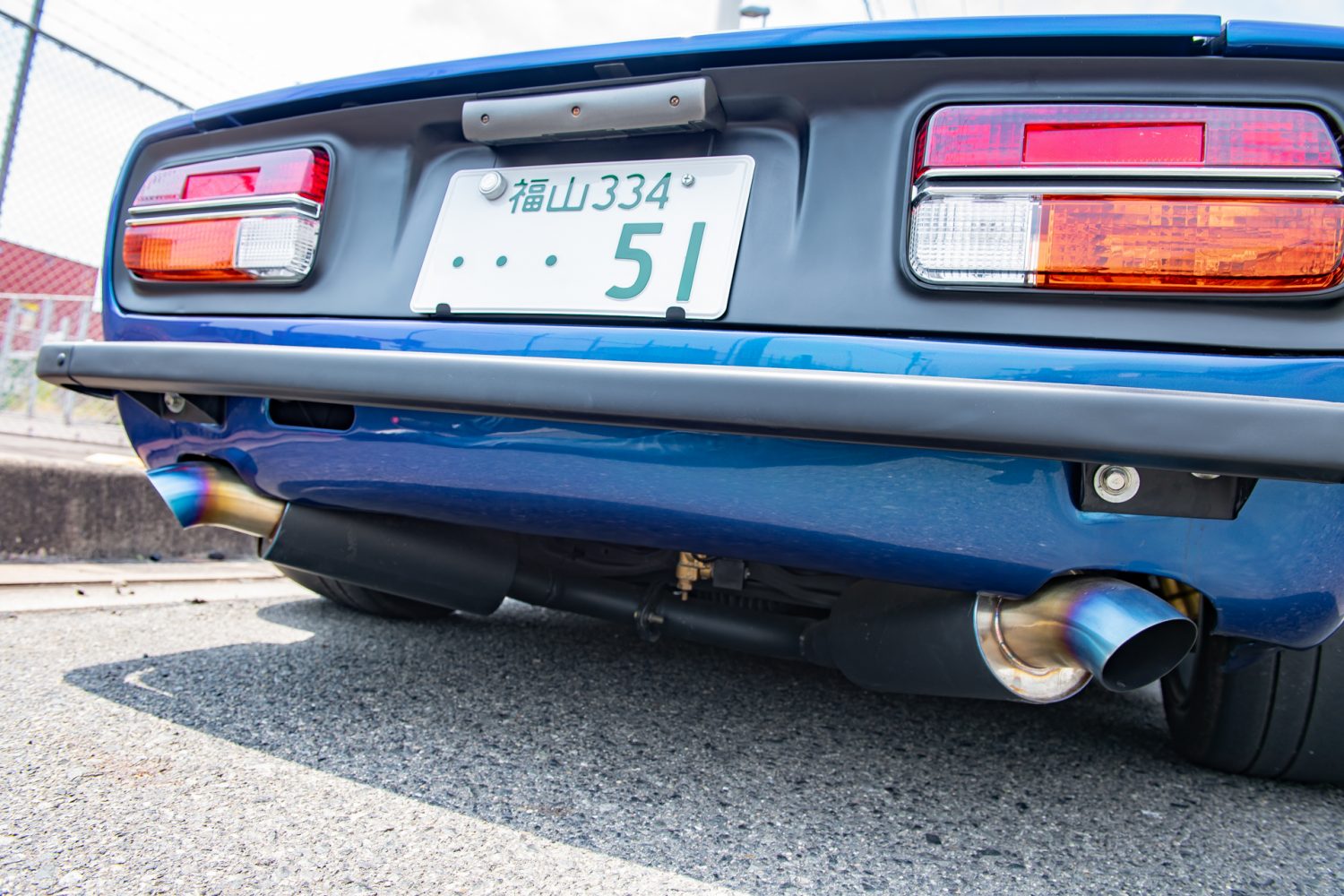 In the world of resto-mod automobiles it seems like each project you encounter is increasingly impressive. The addiction of incorporating modern performance doesn’t seem to be slowing down. With creative, motivated individuals like Hiroshima’s Kiochi Kanoe leading the way who knows what will pop up next. Maybe there will be laser beam eyes. Or something like that… 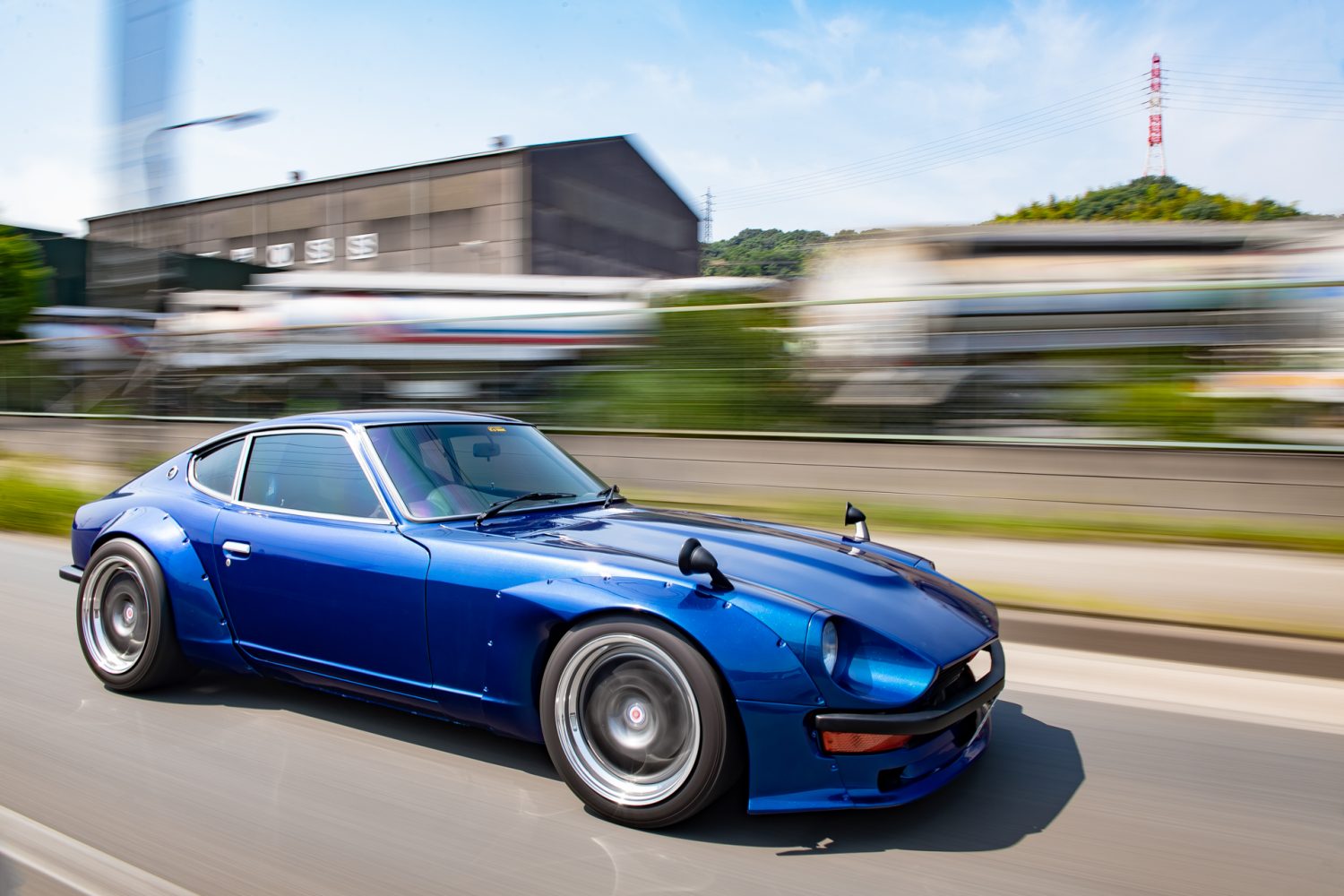 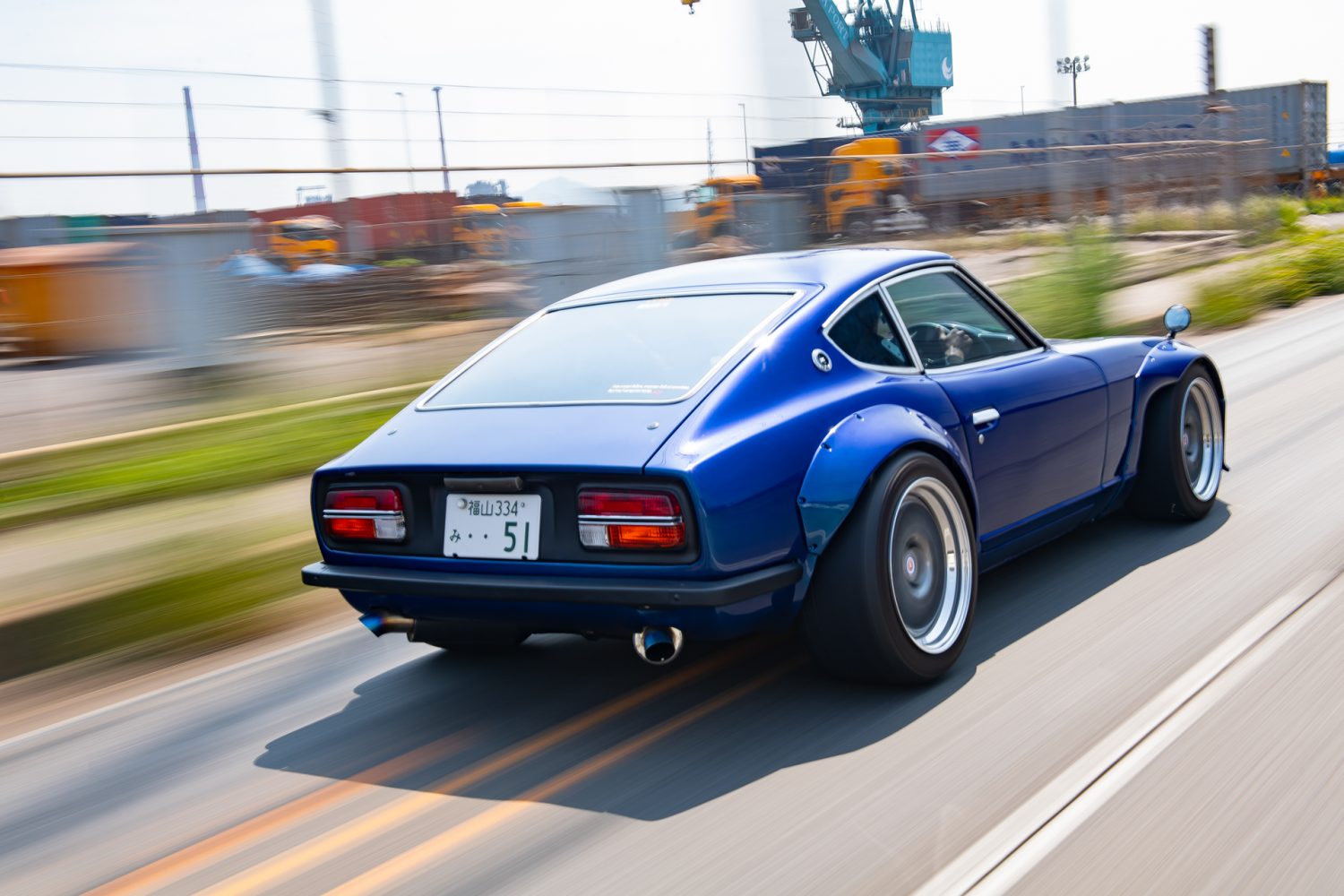